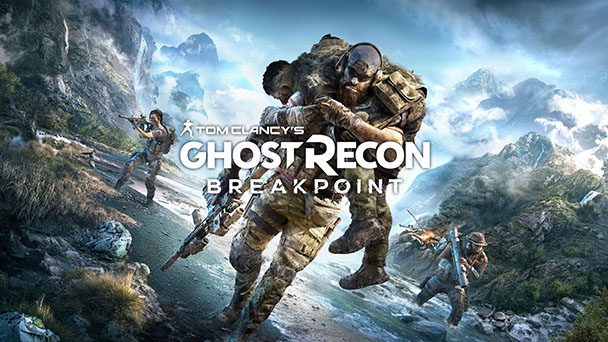 Across its eighteen-year history, Ubisoft’s Ghost Recon series has been a key innovator in the military shooter genre. Drawing inspiration from Tom Clancy’s oeuvre of tense action-thrillers and revealing non-fiction works, the franchise’s unabashed technological fetishism would be mimicked when Call of Duty and Battlefield wished to move beyond their World War II contexts. Alongside the Operation Flashpoint series, Ghost Recon paved the way for open-world autonomy and class-based teams. Revisit 2001’s inaugural entry and you’ll discover a requirement for reconnaissance and a synergy across riflemen, support, demolitions, and sniper units.

2017’s Ghost Recon: Wildlands situated the series’ heating action in the type of sandboxes that Ubisoft had cultivated across its Assassin’s Creed and Far Cry series. Initially, it was an uneasy fit, with a plethora of lesser bugs diminishing the experience. But with enough patching, Wildlands eventually realized its ambitions, permitting squads to reconnoiter outposts, eliminate outlying guards and mark targets. Then, once the signal was given, your team would attempt to sweep and clear the area of enemies with pedantic precision. 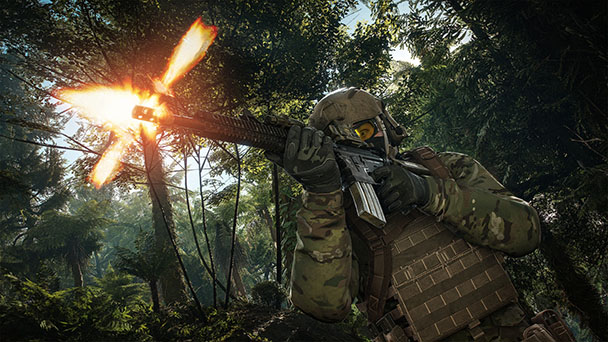 Building on a Solid Foundations

However, with exhilarating regularity, things would routinely go south. A roving band of Unidad Forces might investigate the disturbance, flanking a Ghost team engaged in a firefight. Or a bit of overconfident recklessness during recon would alert a single enemy, inadvertently stirring up an entire hornet’s nest of furious opposition. Survival in Wildlands meant having a moment-to-moment contingency plan. And when your back-up strategy was effective, it was some of the best power-fantasy available on the market.

When Ghost Recon Breakpoint was first announced, I was worried about the direction the follow-up was taking. The decision for an always-online requirement didn’t sit well with me. Sometimes, I like being able to take down foes wherever there’s an AC outlet for my laptop, and these places don’t always have a reliable internet connection. Games as a service have finite lifespans too. When Ubisoft eventually turns off the servers, the game is gone for good. This has happened to quite a few games in my collection but acceptance never gets any easier. If anything, I’ve grown more resentful of the practice, as the number of inoperable titles continues to grow. But for now, we solider on. 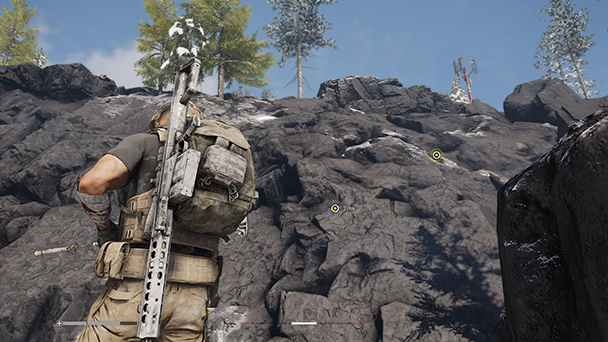 While my AI teammates in Wildlands were often boneheads, they saved my hide a multitude of times. Purportedly, they’re coming to Breakpoint but aren’t currently available. Given that the franchise has always hinged on the reliance of your brothers in arms, this feels inexcusable. Sure, you can play with a squad of online partners, but at present Breakpoint demonstrates issues with scalability. With groups, firefights are often so easy, you’ll feel like a tag-along instead of playing an indispensable role in your team’s survival.

Playing as an individual, you can sense the direction that developer Ubisoft Paris wanted to take. Tom Clancy games have dependably centered on technological superiority. Whether it’s Splinter Cell, Rainbow Six, or Ghost Recon, cutting edge equipment has allowed for a tiny strike team to sneak in and systemically take down a much bigger opposition. With Breakpoint, the heroes no longer have the upper hand, and you’ll often feel like a resistance fighter talking down armed drones and fortified infantry. 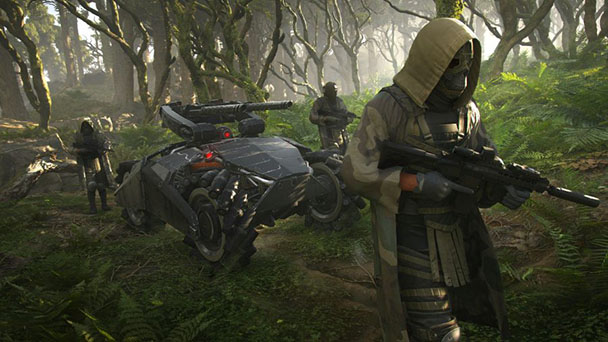 You Try Being Tactical While Wearing an Iron Mask and Hood

In the process, Breakpoint likes to remind you that you’re a lamb walking among deadly, voracious wolves (literally, the game’s enemy are a faction of ex-Ghosts who call themselves ‘wolves’). Periodically, a drone icon will appear on your mini-map, forcing you into hiding, or else you’ll suffer a barrage of machine gun fire and enemy personnel honed in on your position. These are wonderfully tense moments, removing some of the essentials of your load-out, but the game pushes them at you with enough frequency to induce tedium. Likewise, soloists will occasionally alert enemies of their position. While there should be a punishment for breaching furtiveness, Breakpoint is often overly punitive. As a lone soldier, dealing with fasting moving drones, tanks, and helicopters that quickly encircle you can lead to frustration, with contingency plans being largely ineffective. Additional frustration might stem from the respawn point, which often makes you hoof it back to the objective.

On the upside, you’ll have access to drones early in the game, and it doesn’t feel like the short-range, underpowered toy from Wildlands’ early hours. You’ll probably be using it incessantly from a covered position, scanning the area for hostiles and marking their position.  Pleasingly, these provide sync shot opportunities once you’ve unlocked the appropriate skill, permitting you to take out multiple hostiles without giving up your position. 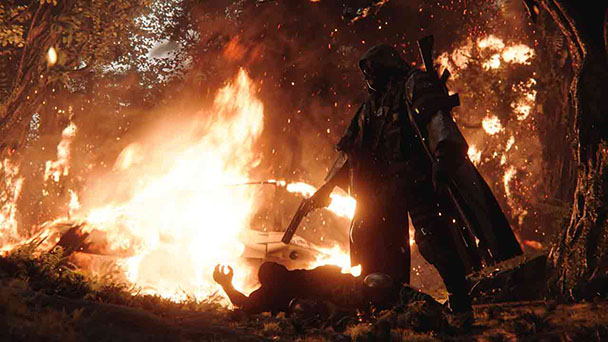 Regrettably, the rest of your arsenal doesn’t feel as essential. Enemies occasionally drop loot which you’ll also find locked away in chests scattered the game’s archipelago-based environments. At first, Breakpoint feels like a gacha game, and the thrill of finding a shiny new sniper rifle or sound-suppressing attachment is delighting. But before long you’ll settle down with a loadout that matches your play style and finding new equipment will those most of it’s thrill. Guns are given level ratings (different from your own ranking), but since Breakpoint is rooted in reality, the difference between weapons isn’t significant. Essentially, any gun is capable of dropping any helmet-less foe with a single shot.

Similarly, that’s the case with your clothing as well. New gloves, pants, and shirts flaunt different grades, but in execution, you’ll probably won’t notice much of a difference beyond the obvious aesthetic changes. Progression in Breakpoint’s campaign also carries over to the game’s PvP component, so perhaps normalizing gear was a concession for player balance. Wildland’s multiplayer was crafted after the released main game and it undoubtedly showed; the game’s skirmishes seemed to struggle to maintain a player base. At launch, Breakpoint’s game’s Elimination and Sabotage show more promise, but neglect to draw distinction from other team deathmatch and team objective based titles. Think of them as a bonus on top of the main game and you won’t be too disappointed. 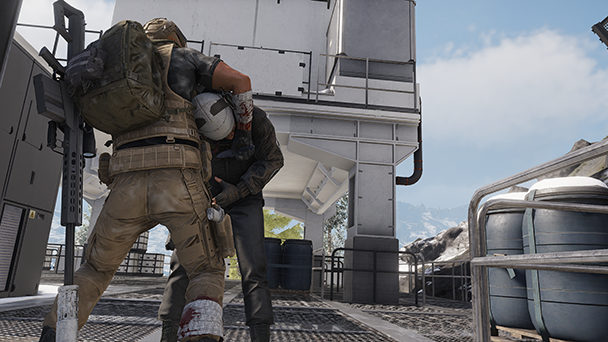 Micro-Transactions that You Can Mostly Ignore

Before launch, there’s was a collective concern that Breakpoint’s micro-translations would impair the balance of PvP, or the pace of PvE. Thankfully, that’s only half-true. Pleasingly, the game doesn’t nag you to purchase Ghost coins. Instead, if you really must own a particular weapon or attachment, you can pony up and buy it, or you can just hope the random number generator gods smile upon you, letting you find the desired item in-game. Essentially, opening your wallet speeds up the whole equipment acquisition process. As such, purchasing Ghost Coins effectively shortens your playtime and since the game isn’t stingy on leveling up, you probably won’t want to purchase them.

In its current state, Breakpoint’s medium and small glitches are almost too numerous to count. Mercifully, they’re not game breaking. But between things like seeing your ghost suspended thirty feet in front of a vehicle or not being to grab intel because your context-sensitive actions are fixed on fallen soldiers ranges from comical to irritating. That said, Breakpoint does offer a number of improvements on its predecessor. Enemy AI is noticeably improved, and while foes still take cover slowly when a friend is shot, it’s gratifying for them to seek cover or occasionally ‘pie’ a corner. While the landmass can feel a bit empty at times, the game’s environments flaunt a number of eye-pleasing visual effects. 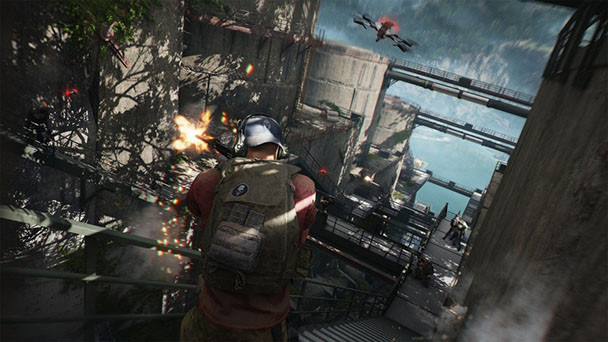 The Tom Clancy games have often been flirted with jingoism and xenophobia, much like the literature that inspired them. Ghost Recon Breakpoint tries to remedy that, with a tale of a former army commander and comrades who have gone rogue, taking over a South Pacific island named Auroa. Empathy for high-level renegades who become disheartened as they learn of a system’s failings isn’t new. Michael Bay’s The Rock wrought tension from the situation twenty years ago. Unfortunately, Breakpoint’s storytelling struggles to muster up any gravitas. Much of the blame falls on the cutscenes, where cliché creeps in with worrisome frequency. I thought my eyes were going to roll right out of my head when a hospitalized comrade uses his last bit of energy to give the player a small drone.

While Breakpoint turns the tables, pitting all the technology that once gave players an advantage against us, there’s little reflection to be found. While it’s doubtful that anyone jumps into a Ghost Recon game for the story, the modest ambitions here are disheartening. Breakpoint could have cultivated tension as you skulk Auroa’s ground, air, and sea. Perhaps, like Wildlands, the game will slowly metamorphize into something worth experiencing. Currently, Breakpoint feels like Ubisoft took concepts from its other key franchises and forced it into a ‘games as service’ framework. If either of these seem problematic to you, I’d encourage additional research before decided to enlist.

Tom Clancy’s Ghost Recon Breakpoint was played
on PC with review code provided by the publisher.

Tom Clancy’s Ghost Recon Breakpoint review
Across its eighteen-year history, Ubisoft&rsquo;s Ghost Recon series has been a key innovator in the military shooter genre. Drawing inspiration from Tom Clancy&rsquo;s oeuvre of tense action-thrillers and revealing non-fiction works, the franchise&rsquo;s unabashed technological fetishism would be mimicked when Call of Duty and Battlefield wished to move beyond their World War II contexts. Alongside the Operation Flashpoint series, Ghost Recon paved the way for open-world autonomy and class-based teams. Revisit 2001&rsquo;s inaugural entry and you&rsquo;ll discover a requirement for reconnaissance and a synergy across riflemen, support, demolitions, and sniper units. 2017&rsquo;s Ghost Recon: Wildlands situated the series&rsquo; heating action&hellip;

Summary : At times, Tom Clancy's Ghost Recon Breakpoint literally straddles the breaking point, with a multitude of annoying bugs and glitches. Assuming those eventually get worked out, deeper design issues are fated to linger with the game seemingly lacking a clear identity. For those that have wondered if loot crates belong military shooter, Breakpoint demonstrates the discomfort of this fusion.