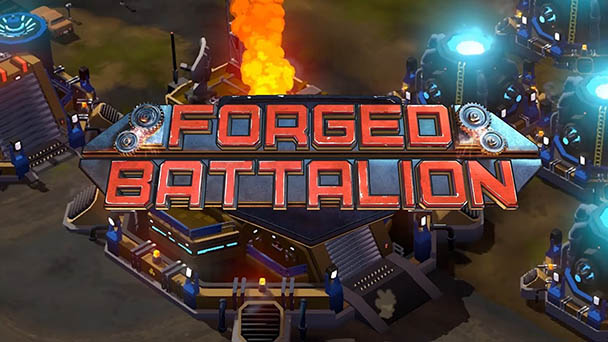 For some studios, sticking with the same genre for too long can induce stagnancy. All too often, the motivation to create a succession of sequels is motivated by money rather than any kind of creative expression, with publishers like Electronic Arts and Activision pushing once vibrant properties right into the ground through a procession of annual iterations.

That doesn’t seem to be to the case with Las Vegas-based Petroglyph Games. Formed from the fallout of EA’s closing of Westwood Studios, Petroglyph has stuck with the real-time strategy game, while attempting to inject some innovation with each new effort. Although 2015’s Grey Goo might not have resonated with audiences, the addition of a faction built from self-replicating nanobots felt inspired, shifting player strategies in the process. The developer’s 8-Bit series (Armies, Hordes, Invaders!, and Armies: Arena) fused Minecraft’s voxel graphics with classic mechanics, resulting in a nostalgic throwback to simpler RTS titles. 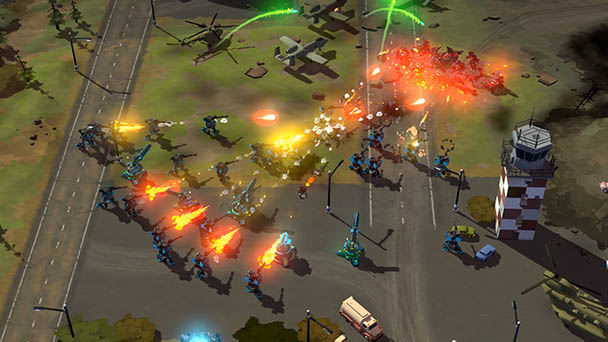 The Early Access Steam release of Forged Battalion demonstrates Petroglyph pursuit of advancement, with the team seemingly taking a Jeet Kune Do-like attitude to traditional faction set-ups. Unlike the rigid units of most real-time strategy games, Battalion strives to adopt an amorphous approach. Here, players are able to research technologies and use that information to craft their own customized units. Unsurprisingly, there a number of fundamental decisions that will guide and affect your methodology. Invest your research points in high-tech hardware and development will inevitably take longer, but the upside it that the durability of your units is increased.

From the main menu, users can spend any earned research points across a tech tree that spans four tiers, currently providing 71 different technological perks. Once these are unlocked they can be used when creating one of the five types of units- from infantry, light vehicles, heavy vehicles, aircraft, and turrets, modifying elements like weaponry, movement, and support functionality. Initially, it might be a bit daunting, but there are pop-up help overlays to assist you. For better or worse, Petroglyph doesn’t let players go wild, from the start. You’ll have to earn resource points through play before some of the more interesting stratagems become available. As Forged Battalion heads towards a full release, it will be interesting to see how Petroglyph balances the feeling of unit dominance and adaptability with a sense of balance. Although a feeling of power might be invigorating, too much muscle might undermine the challenge of the main campaign or introduce disparity in multiplayer skirmishes. 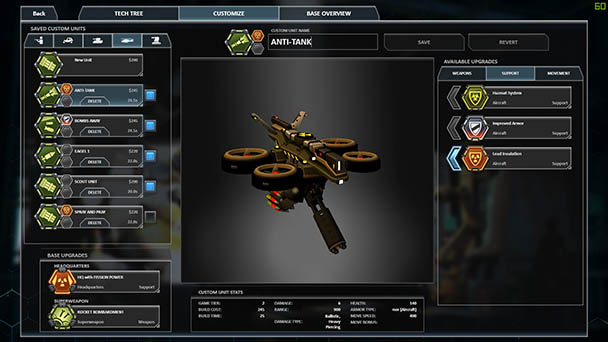 The most recent build extends seven campaign missions to players, ranked and unranked battle modes, as well as a skirmish mode. Jumping into the game’s main campaign reveals potential, as well as some RTS clichés that should probably have been excised years ago. Notably, your harvesters still exhibit marginal intelligence, failing to react when they are under attack. Your attackers occasionally don’t do much better. Regularly, you find a regiment who stand by idly as adjacent allies are attacked. While pathfinding is functional, in Battalion’s current state enemy AI seems to use prescribed attack routes rather than any type of decision-making routines, diminishing the enjoyment from replay.

To counterbalance this, enemies are powered-up from the start. Compounded by their relentless development speed, Forged Battalion could induce frustration for those who approach the game at a leisurely pace. But stick with the game and you’ll gradually earn resources, even if you’re on the losing end of a campaign mission or skirmish match. On the upside, this helps to offset match quitters. But when an enemy is trying to hunt down a secluded Harvester, you’ll wish the game had a concede button. 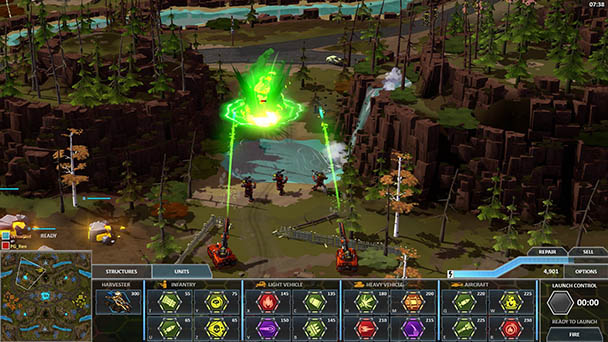 Graphically, Forged Battalion shirks any ambition of photorealism, opting for a hand-drawn look that’s visually contenting. As such, flora and backdrops are agreeably stylized, saving GPUs from rendering a significant number of polygons. Instead, detail is devoted to units and buildings, while glowing projectiles and radiant explosions are color-coded to avoid visual cacophony. And while the game’s user interface might lack the responsiveness of Blizzard’s body of work, it’s clean and well-organized. For those who prefer keyboard shortcuts, Battalion obediently adheres to Petroglyph tradition.

Intermittently, it’s easy to tell if an Early Access release is on track for success. With Forged Battalion things are a bit uncertainly. Certainly, Petroglyph pedigree and aspirations bode well, potentially providing players with an indispensable entry in the real-time strategy genre. But there are also a number of uncertainties as well as obvious placeholders like a text-based plotline. Unlike the swift approach most players adopt use RTS’s, it might be prudent to adopt a slower, more methodical attitude toward Forged Battalion. 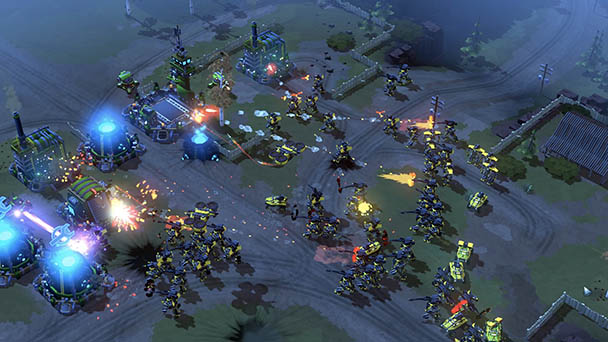