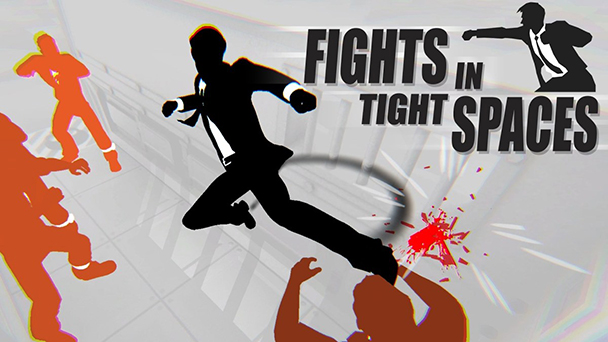 Deck-based, ass-kicking action that’s even better than the B-movie title might suggest. 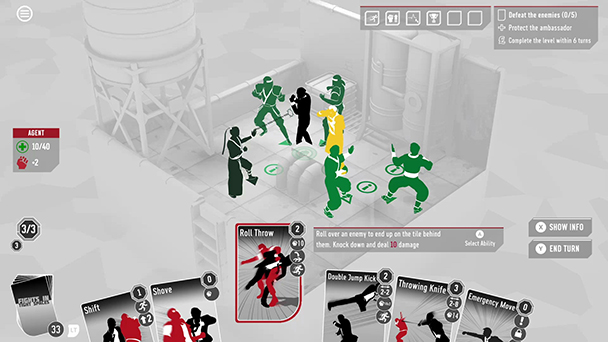 If you ever owned a Sony PSP, there’s a good chance you might have played 2005’s Metal Gear Acid or the sequel released the subsequent year. A bold departure from the mainline titles of Hideo Kojima’s stealth-action series, the ACID series still focused on the exploits of Solid Snake. But instead of real-time combat, the protagonist’s actions were structured by a deck of cards that provided access to movement, weaponry, and a multitude of fighting maneuvers.

In the decade and a half since Acid’s release, few games have attempted to duplicate the game’s formula. But, likely one of the developers at Ground Shatter was captivated by Shinta Nojiri’s spin-offs and become disappointed that no one built on the creative premise. With the release of Fights in Tight Spaces, that omission has been partially rectified. While the efforts of the Bristol-based studio don’t deliver the storyline of the Metal Gear Acid series, the intensity of close-quarter combat has been painstakingly preserved. 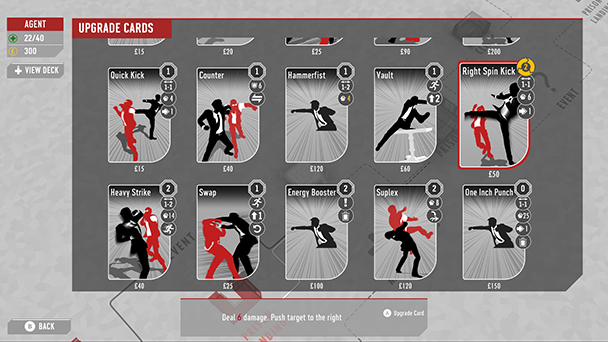 Instead of any long-winded narrative, Fights in Tight Spaces is refreshingly light on exposition. You play as an agent working for Section Eleven, an organization where combat skills and looking dashing while dishing them out seem to be the two foremost requisites. Each run uses one of four different cards decks, sending the operative through a succession of environments like bars, bathrooms, and stairwells, all situated on a node-based map.

Typically, play revolves around a deal where six cards are issued to the player. Two variables control the conflict: Momentum points and the Combo counter. The former are Fights’ interpretation of action points, with a kick that knocks an enemy back costing three Momentum. Sporadically, you might be dealt a Focus card, which can help replenish come of your Momentum points. Each successful attack elevates your Combo level and meeting a specific threshold lets you unleash fury on your opponents. And yes, following an elbow smash with a roundhouse that sends an enemy backward is massively rewarding. 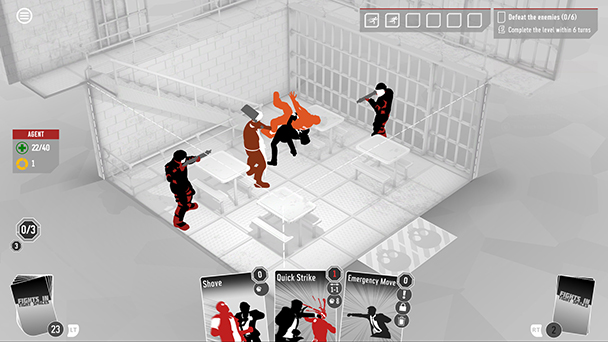 Will You Take a Bullet for Me?

What separates Fights in Tight Spaces from other deck-based brawlers like Darkest Dungeon and Slay the Spire is the game’s three-dimensional battlegrounds. As the title implies, conflict is situated in claustrophobic zones, with grid spaces filled with spawning opponents and occasionally environmental obstructions. Success means thinking several steps ahead of your adversaries, seizing every opportunity provided. From slamming heads against wall to tossing opponents out of the arena, Fights can often play like a puzzler, especially when you come up with a solution that dishes out the damage, while shielding your own supply of hit points.

Drawing from the choreography of action films, seeing opponents accidently injure their own allies is particularly satisfying. Weapon trajectories are marked, and you’ll feel like Jason Statham when you switch places with an enemy, putting him in line to take a bullet. Occasionally, Fights tosses in Ambassadors and Informants.  You’ll protect diplomats by shoving them around (your pushes won’t induce damage) or taking a bullet for them. The second group is especially interesting. They’ll act like normal foes attacking you, but you’ll earn a bonus if you ensure the Informant is still standing at the end of the skirmish. 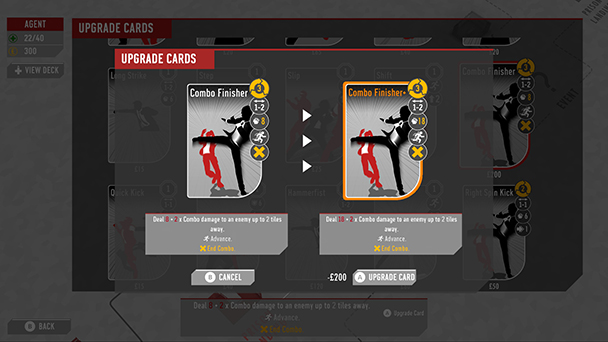 After each fight, you’ll earn cash for various doing things like eliminating adversaries quickly and ensuring the safety of Ambassadors. Since running out of health ends your game, you’ll be temped to spend your earnings to heal at a clinic. But you’ll probably want to save a few bucks for purchasing new cards and upgrading your existing deck. While you can get pretty far with the deck of default cards, when enemies grow in number of resilience, evening the odds is advisable.

Even in the game’s Early Access state, Fights in Tight Spaces is functionally complete, with Ground Shatter committed to adding more ways to issue injury, as well as Daily Challenges. Beyond the variety of fighting arenas, you’ll also confront a multitude of different foes, who range from mafia types, bikers, prisoners, and even ninjas. Throughout the trek, you’ll be treated to a minimalistic art style that recalls SUPERHOT. Nicely, you can even re-watch your fights play out after each mission. Meanwhile, the game’s tense synth-driven score means Fights sounds like a contemporary action-movie. 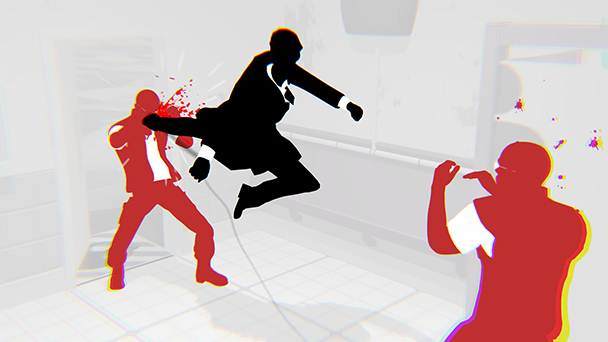 For players tired of two-dimensional, card-based combat in fantasy settings, Fights in Tight Spaces offers a rewarding change of venue. Using a deck to act out the kind of sequences that fuel adrenaline-soaked action films like The Raid: Redemption or John Wick proves to be a lot of fun. While this Early Access almost feel completed, it would be great to see Ground Shatter tackle a sequel that remains the fundamentals while on ranged firefights.