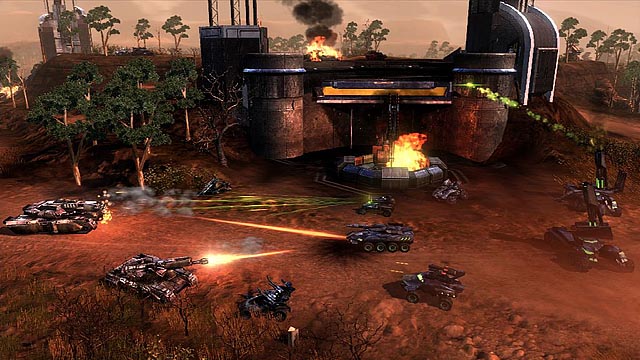 As Ron Perlman’s elegiac narration for the Fallout series reminds us, “War never changes”. With its dystopian premise proclaimed by its title, End of Nations certainly seems to espouse the adage. Set in a post-apocalyptic world where the once-facilitative Order of Nations has become a malignant, totalitarian force, hope arises amid two conflicting factions. With a commitment to virtue, The Liberation Front operates by a rigid set of moral guidelines, while the game’s Shadow Revolution advocates a fervent and occasionally furtive approach. While the Order of Nation’s units are always under AI control, players are obliged to side with one of the separatist movements in order to fight for stability across the globe.

As such, End of Nations aims to serve a variety of divergent audiences, disproving the steadfast nature of strife. For participants seeking a story-based campaign, the title’s single-player component is said to be robust enough to sustain a retail, disk-based release. Those seeking opposition from another human will be happy to find that the game scales from diminutive two-player skirmishes all the way up to an unprecedented 56 player crusade. While this lofty ambition might initially seem imprudent, with talent from Petroglyph Games (Star Wars: Empire at War, Universe at War: Earth Assault) as well backing from Trion Worlds (Rift), the title’s heritage seems to support this aspiration. 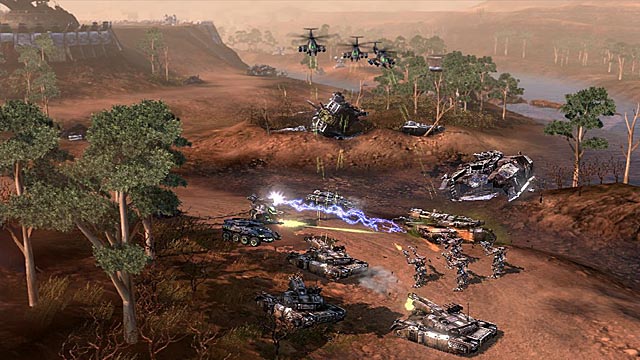 While a recent preview event revealed that Nations’ amalgam of RTS and MMO closely adhered to the Rochambeau approach which dominants the real-time strategy genre, the game does offer a pleasing set of divergences as well. Those accustomed to the obligation of resource harvest might be pleased to know that the title forgoes the responsibility, keeping the focus on the thrill of combat. Instead, income used to outfit and rebuild your armed forces is derived from the capture of key locations around each map.

Since End of Nations was being billed as a free-to-play title, I initially assumed that every defeated tank, helicopter, or infantry unit which cost real-world money to revive. Fortunately, that isn’t the case- and while the representatives from Petroglyph were ambiguous about their monetization plans, they pledged that players wouldn’t be able to use currency to gain an unfair advantage. Hopefully, the command of cash will be limited to lightweight perks such as the vanity bacon skin which wraps tanks in ribbons of cured pork. 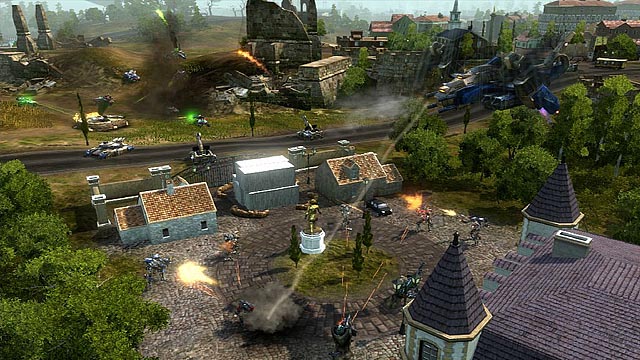 Beyond the battles which take place in locales around a world map, Nations also contains a persistent meta-game fueled by these smaller conflicts.  Before hopping into an encounter, players are shown a world map which articulates the current balance of power. Presumably, leading the Shadow Revolution or Liberation Front to victory will adjust the equilibrium of influence, bestowing an overarching impetus to each match.

Although End of Nations was running a pre-beta build, the game’s engine seemed capable, exhibiting maps filled with battalions of nicely rendered infantry, tanks, and aircraft. The title’s area of effect perks were especially pleasing, flaunting demoralizing attacks capable of devastating unsuspecting forces. Considering that the Petroglyph studio is comprised of key figures from across the RTS realm- including Command and Conquer, Age of Empires, and Dune II, players can assume that Nations’ visuals will match its variety. 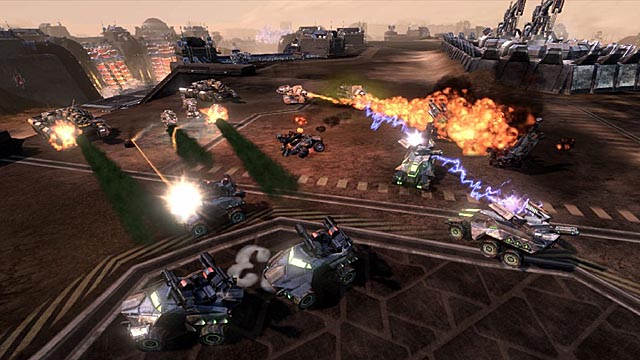 The prospect of a RTS that scales from a single player story mode to an epic campaign capable of supporting over fifty players seems enormously ambitious. Yet, from what Petroglyph Games and Trion Worlds recently demonstrated, End of Nations seems poised to deliver on its promises. Currently in a closed testing phase, the title will transition into an open beta this summer, followed by the unveiling of a complete campaign in early autumn. Although several other free-to-play diversions will inevitably vie for recognition, Nations has already demonstrated enough vitality to warrant a test drive from players.

Previous: FIFA Soccer Review
Next: Podcast 10-3: Worms is Golf, Only with Explosions