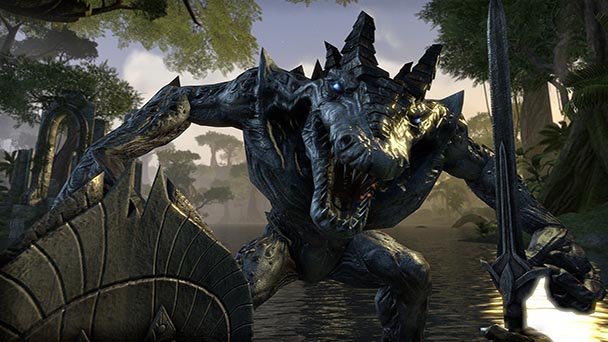 For decades, interactive role-playing games have incorporated the character archetypes popularized by the pen-and-pencil game of Dungeons & Dragons. Often employing variations of the stalwart fighter, the curative cleric, spell-casting magic-user and the nimble thief, this standard has demonstrated a number of benefits. First, it pushed players into identifying with a particular type of adventurer. Survival meant minimizing a character’s natural weaknesses while taking advantage of their class abilities. Diverse teams spurred a pleasing a sense of synergy, with each member adding to the effectiveness of the entire party. As such, the traditional classes become a foundational component in many multiplayer RPGs.

In 2011, Bethesda Game Studio’s The Elder Scrolls V: Skyrim cunningly challenged the paradigm. An unabashedly single-player experience, Skyrim removed class conventions, allowing stealthy Argonians to become adept with heavy two-handed weapons or even master conjuration-based or restorative magic. While race endowed characters with natural abilities, players could pursue any vocation they desired. In execution, the change felt exhilarating- and along with Skyrim’s nonlinear mission design, catapulted the title to critical and commercial success. 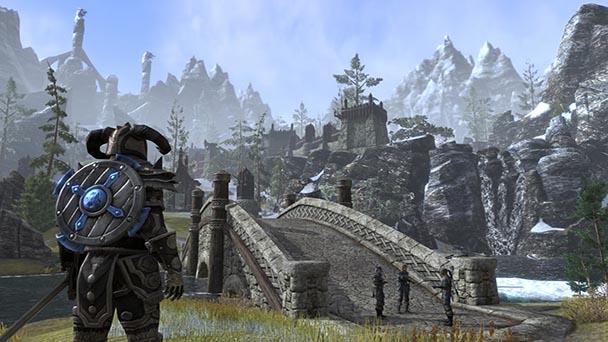 As The Elder Scrolls Online neared release, many gamers wondered if Skyrim’s exhilarating sense of autonomy would be carried over to the massively multiplayer online role-playing game. After all, parties consisting of a Tank, Healer, DPS, and Crowd Controller have become ubiquitous across the MMO genre. Similarly, concerns emerged over how developer ZeniMax Online Studios was going to extend an experience which satisfied the yearnings of both single-player Skyrim stalwarts as well as groups of raiders, PvP junkies, and those seeking to help sway the balance of power in a persistent realm. A week after launch, The Elder Scrolls Online demonstrates the ZeniMax think-tank assessing an adept balance, while striving to put those ideas into execution. As with the launch of any high-profile MMO, niggling issues are abundant- with many in the process of being ironed out. But if players can peer past the occasional frustration associated with a broken quest or absence of animation, they’ll find that TESO is shaping up to be a worthwhile role-playing experience.

Our journey back to Tamriel began with the game client securing about 30 gigabytes of data. Even amidst the launch day surge, download speeds were impressive, nearly reaching the capacity of our bandwidth. Shirking the typical cue times associated with server-based games, TESO employs a technology which ZeniMax refers to as a ‘megaserver’, allowing the game to organically scale the number inhabitants of the game world. In theory, the method encourages an even population density across cities and dungeons during different time of the day and evening- in practice, it worked, delivering a habitually lag-free experience. Currently, the game hosts two geographically-designated servers, accommodating North American and European players. More servers will be added as the title leaps to the Xbox One and PlayStation 4 platforms next June. 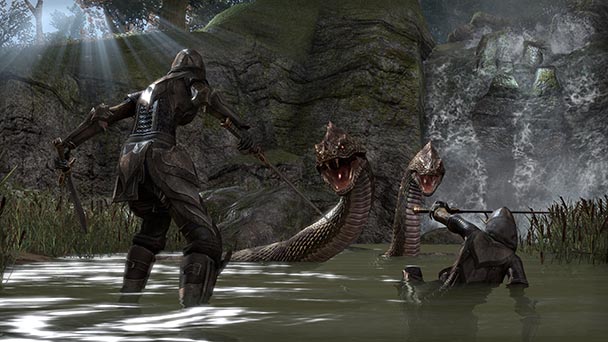 Like any top-tier MMO, The Elder Scrolls Online extends a robust character customization suite. After choosing a name, gender, and race for your character, an array of sliders permit players to tweak body types, hair styles, and other defining features. Ultimately, the component favors homogeneity over individualization- don’t expect to see any unruly, immersion-breaking characters making their way through the game. While TESO extends ten playable races (which Imperials only playable by those who purchase the deluxe edition), the game’s selection of four classes (Dragonknight, Nightblades, Sorcerers, and Templers) might appear limiting at first. Fortunately, the title’s skill point system (further divided into active, passive, and Ultimate abilities) offers a decent amount of flexibility, allowing players to improve character across three-class based skill lines. All weapons and armor types are accessible to each class, adding a bit of Skyrim-style malleability to characters. By amassing three skyshards within the game’s collection of caves, dungeons, and peaks, players earn an additional skill point; as such these object are TESO’s most valuable commodity. Of course, the downside is that there’s no breakdown between say class and crafting skills- forcing budding armor makers to choose between survival abilities and passive talents.

Following character creation, a brief cinematic sequence transports players to a context known as the Interregnum, an era that’s a century before Skyrim and Oblivion– when political turbulence is running rampant. Hoping to capitalize on this volatility, the Daedric Prince, Molag Bal plots to amalgamate the planes of Coldharbour and Tamriel through the use of gigantic Dark Anchors as well as Daedra-summoning portals. Customary for the Elder Scrolls series, you start the game locked in a jail cell, where you meet an ethereal stranger known as The Prophet, who helps you escape. During your getaway, you are privy to a fleeting glimpse of Tamriel’s bleak fate, endowing the game with an overarching impetus.