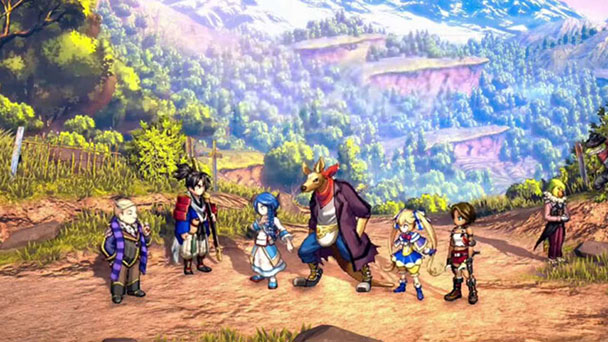 Often, smaller scale prequels seem like marketing for the main game. While it’s uncertain just how much of Eiyuden Chronicle: Rising’s exposition will feed into Hundred Heroes, this is the rare interactive prologue that’s worth seeking out for its play and characters. 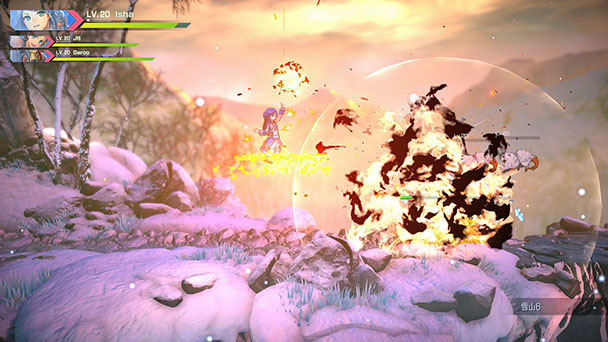 When Yoshitaka Murayama (Suikoden I & II, The Alliance Alive), Junko Kawano (Suikoden I & IV), and Osamu Komuta (Suikoden Tactics) launched a Kickstarter campaign to fund a new role-playing game the reaction was impassioned. In total, nearly 3.7 million dollars were secured and dozens of stretch goals were met. But when Rabbit & Bear Studios’ Eiyuden Chronicle: Hundred Heroes became delayed, Natsume-Atari was called into action to create a prequel that might appease impatient backers.

Typically, situations like this end in disappointment, with an inferior effort that plays like an unpolished demo. But astoundingly, Eiyuden Chronicle: Rising assuredly stands on its own, delivering a 2D action role-playing game that’s a rousing success. Let’s examine some of its qualities: 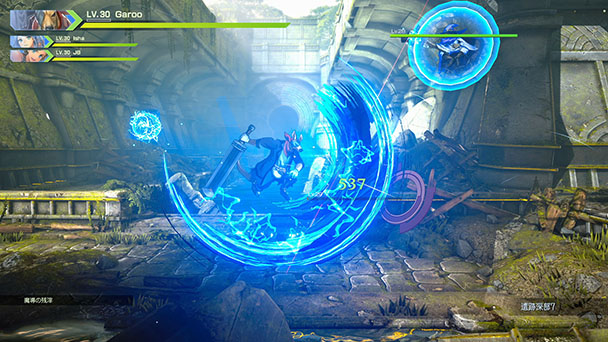 Skilled Storytelling and Characters Worth Caring About

Rising is told from the perspective of CJ, a feisty fifteen-year-old, who calls herself an “ethical treasure hunter”. She was born into a family where the rite of passage into adulthood is to bring home a valuable artifact. But just any old relic won’t suffice; it must surpass the treasures of previous generations. What’s noteworthy is subtle progressiveness of the storytelling. When CJ first reaches the village of New Neveah, the townsfolk are dispirited by an earthquake that leveled most of town’s structures. They’re resentful of treasure hunters descending on their settlement hoping to make a quick buck from the misfortune.

As such, CJ’s arrival is treated with disdain and suspicion. But repeatedly, she exhibits exertion and a sense of compassion, winning over cynics with deeds and a willingness to listen. Here, the difficulties of assimilation might be a bit sugar-coated, but the emerging sense of comradery between CJ and the rest of the cast is heartwarming. Likewise, I appreciated how CJ’s gender wasn’t depicted as a complication. She’s a resilient, young women who earns respect for her fighting prowess and compassioned principles. There’s little of the eye-rolling, “you’re not a bad fighter for a girl” nonsense. 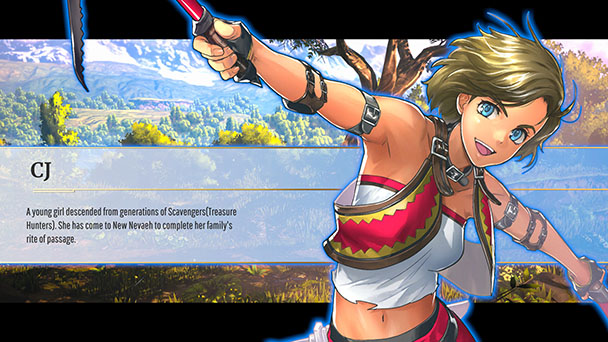 Isha, New Neveah’s mayor, initially seems like an uncooperative figure. She requires treasure hunters to pay a massive license fee as well as an exorbitant tax on each found relic. The only alternative is a stamp-card system that’s inclined for exploitation of free labor. But gradually, Rising reveals the motives behind Isha and other character’s actions, potentially provoking players into changing their opinion of Isha. And that’s just one example of the game’s approach to character development. Across the fifteen-hour jaunt, there’s an insightful examination of human relationships. It’s not quite strong to yank on the heartstrings, but there is contentment as folk come together to help rebuild New Neveah.

Restoration requires materials, which sends CJ, magic-using Isha, and a formidable mercenary named Garoo across a network of side-scrolling locations. Smartly, Eiyuden Chronicle: Rising gradually unlocks the number of places your party can visit, which helps prevent players from getting lost early on. You’ll have access to a fast-travel system, which is advantageous as you chase down 160 different requests. 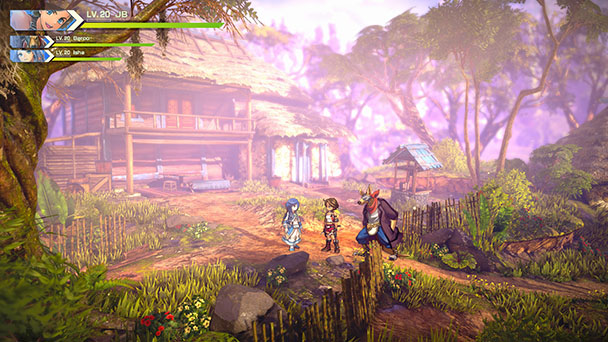 Initially, you’ll have access to CJ, who dishes out an insubstantial two-hit combo. But as other characters join her cause, you’ll he able to instantaneously tag-team them in with different face buttons, resulting in longer successions of strikes. Before long, you’ll be calling on CJ, Isha, and Garoo to gang up on Rising’s diverse selection of foes.

Their cooperative attacks making combat feel like you’re playing a fighting game against a noob opponent, especially when well-timed button presses initiate Link Attacks that dish out punishment while slowing down time. Natsume-Atari even rewards your quest efforts by making these assaults even longer. The sole downside is that there’s little worry of defeat throughout most of Eiyuden Chronicle: Rising. But the approach means there are very few moments of frustration, either. 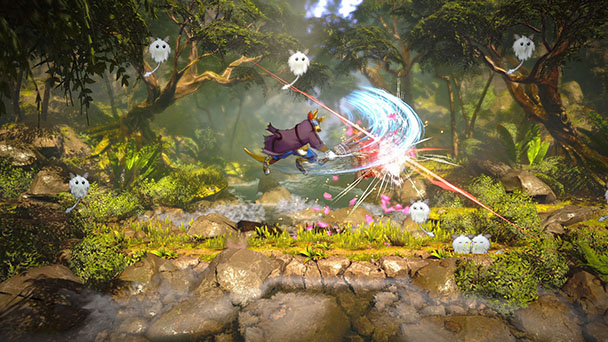 Each character has their own navigational and offensive abilities, adding a slight Metroidvania vibe. Early on, when you see an unambiguous object blocking the path forward, it’s pretty obvious that Rising wants you to revisit the obstruction with another character. Later, you’ll discover attack bonuses based of what character you are using. But largely, these benefits are dialed down so much that you can effectively disregard any slender advantage.

While Rising’s stamp card system visualizes CJ’s objectives, it’s also a reminder of the game’s resilience of errands. Despite some worthwhile exposition to reward your efforts, staring at rows and columns of empty spots on silver, gold, and platinum cards can be demoralizing. Know before venturing into Rising that the core gameplay loop focuses on speaking with NPCs, venturing into dungeons for desired materials, and finally returning with the goods. It can get repetitive over expended play sessions. As such, Rising works better as a daily grind where you gradually chip away at things. 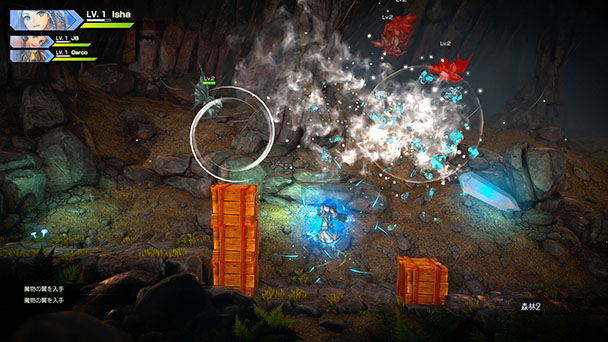 Fortunately, Natsume-Atari do their best to distract you. The game’s backdrops are downright beautiful, nearly rivaling the artistry of Vanillaware. Characters are made from assemblies of individual body parts rather than single sprites. But the technique largely eludes the stiff, marionette-like animation of most games and looks quite fluid. Running on the Unity Engine, Rising is a surprisingly consummate performer. Not only are load times fairly brief, but there are very few instances of slowdown.

The looming uncertainly with Rising is how much will any of this matter when Eiyuden Chronicle: Hundred Heroes eventually releases. Although I can’t speak on that, I can say with certainty that Rising is engaging effort. Elevated by skilled writing and combat system that’s persistently gratifying, even if this undertaking turns out to be superfluous, there’s an easygoing inventory of quests found here. 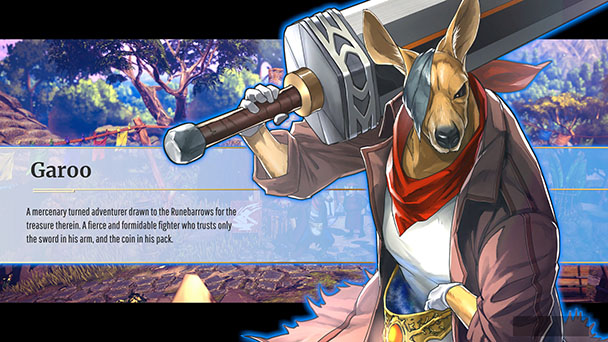 Eiyuden Chronicle: Rising was played on Switch
with review code provided by the publisher.

Eiyuden Chronicle: Rising review
Often, smaller scale prequels seem like marketing for the main game. While it&rsquo;s uncertain just how much of Eiyuden Chronicle: Rising&rsquo;s exposition will feed into Hundred Heroes, this is the rare interactive prologue that&rsquo;s worth seeking out for its play and characters. When Yoshitaka Murayama (Suikoden I &amp; II, The Alliance Alive), Junko Kawano (Suikoden I &amp; IV), and Osamu Komuta (Suikoden Tactics) launched a&hellip;

Summary : Accomplishing a succession of fetch quests might sound monotonous, but Eiyuden Chronicle: Rising’s characters, combat, and drip-feed of rewards help to make it worthwhile.