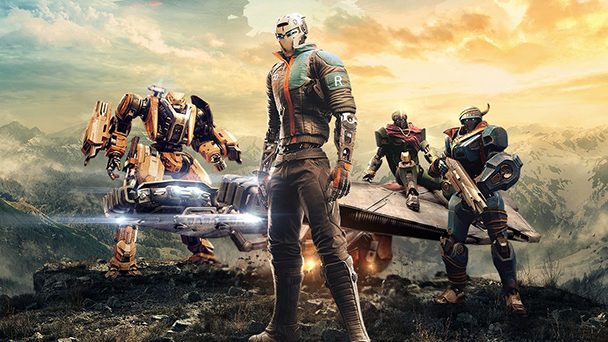 Plotlines are often dispensable in real-time strategy and first-person shooter games. Disintegration provides an absorbing motivation for its blend of genres. But the game’s action isn’t as tactical or engaging as it should be.

For years, developers have attempted to merge real-time strategy and first-person shooter genres. Games like Raven Squad: Operation Hidden Dagger (2009), Warshift (2016), and Eximius: Seize the Frontline (2018) habitually deserted the overhead views and hands-off hostilities of most tactically minded titles. Instead, these efforts added an immersive ‘boots on the ground’ perspective, complementing squad management with some invigorating gun battles.

Unfortunately, these were often awkward experiences. In forming a fusion, the aforementioned games relinquished the satisfaction of outthinking an enemy through shrewd unit placement and misdirection. Likewise, combat didn’t exhibit the playability or polish of dedicated shooters. While ambitious, the result often felt disjointed, with neither constituent being all that enjoyable. 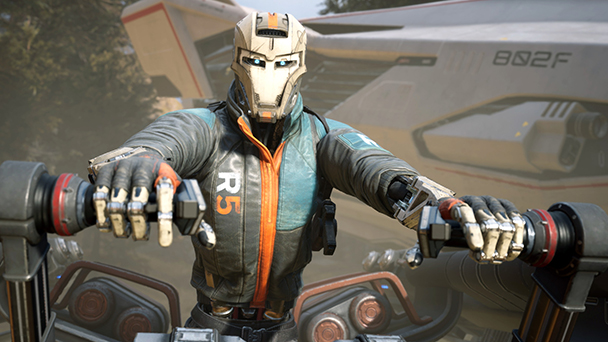 With the release of Disintegration for PlayStation 4, Xbox One, and PC, Redmond-based V1 Interactive tries their hand at this elusive aspiration. Founded by Marcus Lehto, former creative director at Bungie and co-creator of the Halo universe, the game arrives with an impressive pedigree. Despite a development teams that’s far smaller than either Bungie or 343 Industries, the developers achieve several surprising feats. However, a few irksome traits prohibit Disintegration from achieving must-play status.

Frequently, science fiction’s fetishism for technology overshadows the more relatable human elements. For its first few moments, Disintegration seems like it might follow suit, as we meet Romer Shoal. He’s a professional Gravcycle pilot and show host who opted for ‘integration’- a process that puts a person’s brain in a robotic body. But when the procedure is no longer elective and forced on the populace, frictions forms between the Integrated and the Naturals. Romer soon becomes part of the Outlaws, a faction whose moniker makes their dissident intentions obvious. 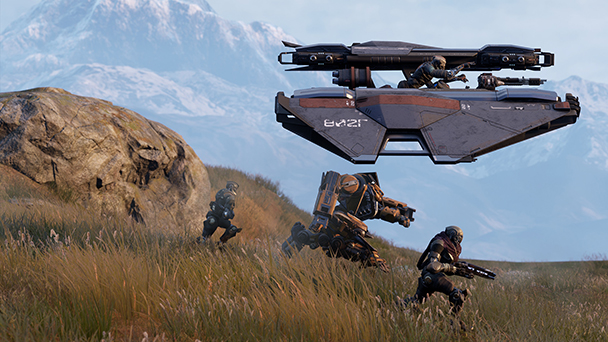 The lightweight transhumanism feels a bit cliched, especially when Disintegration tries to weave tech jargon into its dialog. But things improve markedly when went Romer runs into Waggoner, a Natural elder who runs a clandestine base. Although your fellow Outlaws’ interchanges border on stereotype at times, Waggoner’s wisdom is one of the undeniable highpoints. After the ten-hour campaign is completed, you’ll wish you could have heard more from him and less time walking through a vast, largely vacant headquarters. Despite that, you’ll likely develop an affinity for your fellow Outlaws, which is essential since they’re largely automatons during gameplay.

Much like Halo’s universe, there’s a density to the lore, and flora-rich environments that occasionally shirks that stark brutalism which permeates sci-fi. Disintegration doesn’t neglect context and while cinematics of fatigued Outlaws traversing hillsides or lamenting as their cross through war-torn cities might been familiar, there’s often a juxtaposition between serene beauty and intensifying antagonism that elevates the experience. Although Disintegration can be called beautiful, its environments are evocative, hinting at a time of concord. 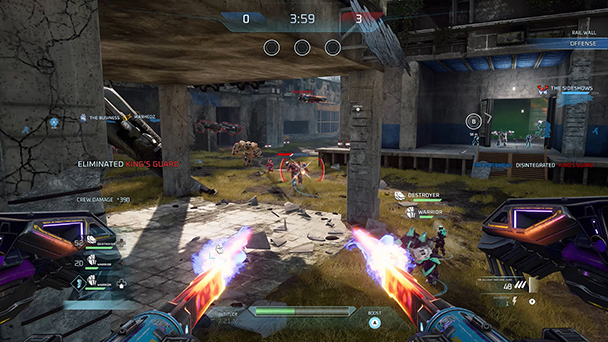 Hovering Over the Battlefield

As Romer, you’ll spend the bulk of your time in a Gravcycle, a well-armed and maneuverable hovercraft. Opt for the game’s tutorial and you’ll learn how to fly the vehicle, which feels like controlling a drone in first-person mode. Since you’re simultaneously navigating and issuing commands to up to four combatants on the groups, there’s a fairly complex control scheme. Nearly every button, directional pad press, and even analog stick click has its own function.

If you don’t issue directives, your fellow Outlaws will act autonomously, running around and shooting any nearby enemies. But save for the first few encounters with foes, explicit orders are needed for success. Fortunately, the mechanic is context sensitive. Choose an empty area and your teammates will scamper over. Select an object and they’ll interact with it, activating a healing station or cracking open a container filled with collectable salvage. 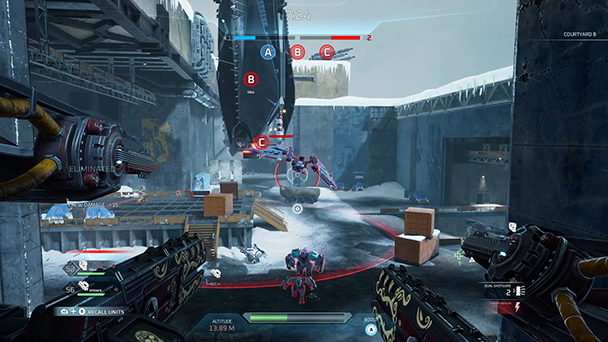 But you’ll often encounter annoyances. You’ll want to issue a helping hand to your partners, usually by gunning down adversaries or healing them. But unless your immediately adjacent to them, they follow the gravcycle around, becoming fodder for enemy rockets. Titles like XCOM repeatedly remind us of the necessity for cover, yet Disintegration’s unit habitually run into the open field, and it often looks like you’re an observer in a noob-filled deathmatch.

To offset this hindrance, you’ll have to make use of unit abilities, each tied to its own cooldown timer. Initiate this and you’ll position an area-of-effect zone where units where enemies will be damaged by grenades, sniper fire, or time-slowing effects. While you might want to exploit chokepoints and flank engaged enemies, moment-to-moment play is grounded in the application of special abilities. It would have been great to summon a storm of covering fire, as your allies creep up on adversaries for different positions. Woefully, this isn’t possible, as you can’t break up your units. Another issue is the slight delay when special attacks are issued. Often, enemies are smart enough to step out of the way, squandering your offensive advantage. 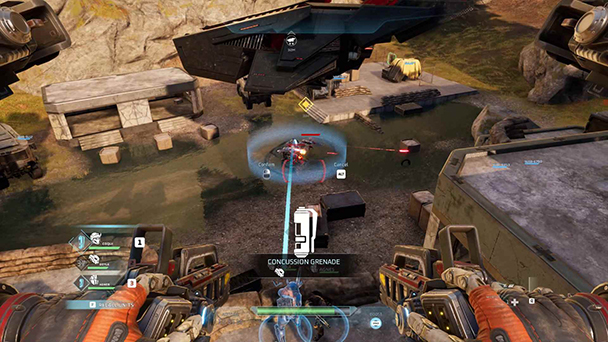 But that’s not to say firefights aren’t intense. Foes will target your Gravcycle if you move in too close. If your craft loses all its health, the mission ends in failure. As such, you must stay in motion, scanning the battlefield so you can take out the most threatening adversaries or delivering the killing shot to wounded foes. While there are moments when you can pull back, licking your wounds by healing units, your allies are quite susceptible. Fortunately, you can fly over their bodies, scoop up their brains, and redeploy with a new body after a brief period. Save for a few difficulty spikes, combat largely feels fair and you’ll triumph if you play prudently. That said, there are a few filler missions; the ones that strip you of your allies feel rather superfluous.

A Trio of Traditional Multiplayer Modes

Given Lehto’s experience with Halo, it’s not surprising to find a healthy multiplayer component in Disintegration. Competitors can choose from a trio of different modes, from Collector, which is a basic deathmatch, Retrieval, a capture the flag variant, and the obvious Zone Control. Although the title limits the competition to five players on each side, each is managing up to four units, making rivalries rather intense. Pleasingly, there’s variability, with combatants able to select crews that offer different weapons, abilities, and looks. An ability to analyze the chaotic on-screen action and manage cool-downs appeared to be a formula for success across the mostly lag-free matches. 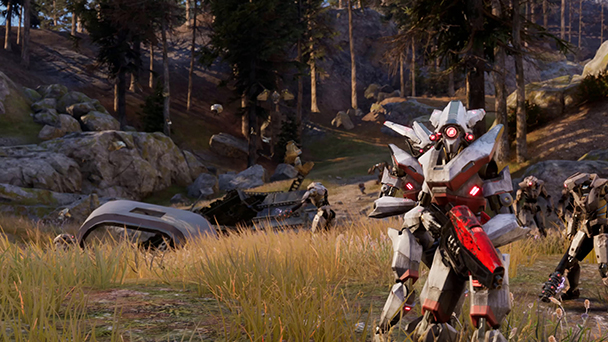 As V1 Interactive’s inaugural title, Disintegration demonstrates a wealth of potential. Although world building is often shortchanged in the real-time strategy and first-person shooter genres, the title succeeds on most of its expositional ambitions. But gameplay doesn’t fare as well. The game’s vehicular-based gunplay is competent while tactical options are restrained. There’s potential here, but regretfully some of it remains unrealized.

Disintegration was played on PlayStation 4
with review code provided by the publisher.

Disintegration review
Plotlines are often dispensable in real-time strategy and first-person shooter games. Disintegration provides an absorbing motivation for its blend of genres. But the game&rsquo;s action isn&rsquo;t as tactical or engaging as it should be. For years, developers have attempted to merge real-time strategy and first-person shooter genres. Games like Raven Squad: Operation Hidden Dagger (2009), Warshift (2016), and Eximius: Seize the Frontline (2018) habitually deserted the&hellip;

Summary : Disintegration demonstrates the complication of genre hybridization. The game’s aspirations are commendable, but execution isn’t all that captivating.