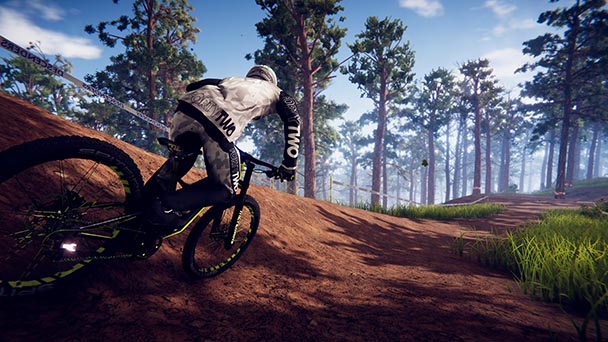 During the 1990s, the extreme sports genre was pervasive, with a multitude of games offering virtual skateboarding, snowboarding, surfing, rollerblading and BMX biking. But after the start of the new millennium, the thrills began to subside, the angsty rock soundtracks become muted, and the garish in-game ads for Mountain Dew and Slim Jims gradually faded into memory. But the recent Early Access release of Descenders undoubted draws from the era, adding a wealth of contemporary design decisions while removing many of the tawdry elements.

Two of the most important qualities for any extreme sports title are the reproduction of speed and handling. Hop onto one of Descenders’ mountain bikes and you’ll admire how well RageSquid (Action Henk) captured the responsiveness of off-roading cycles. Careen down a straightaway by holding down a button to accelerate and you’ll marvel at the sense of momentum. Traverse through a narrow path lined with trees and you’ll likely grow anxious, realizing that a collision with the trunk will exhibit a slow-motion exposition of rag-doll physics. 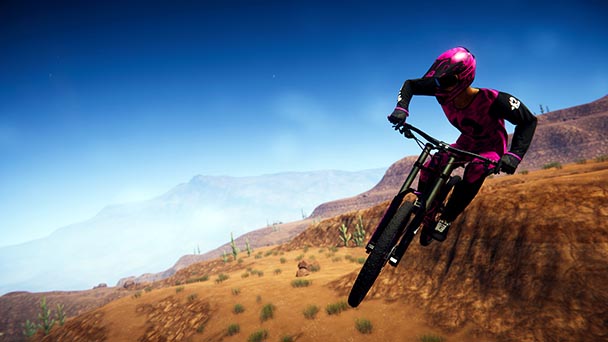 Flick the right stick and you’ll initiate a drift, a maneuver that’s essential when tackling sharper turns at higher rates of speed. Capturing air is also accomplished with the right stick, with a sharp snap producing a bunny hop. Stunting draws on tradition, with a twist of the analog stick delivering a rotation of the X or Y axis.

But unlike the premade courses of old, Descenders keeps things fresh with procedurally-generated routes across a quartet of different milieu. Pleasingly, the game doesn’t construct any unmanageable courses, spacing out features so that you’ll have time to right yourself after a S-bend or gather speed before an approaching a massive ramp that is pointing skyward. Survive most runs and you’ll be able to select your next revenue from an overhead map, which offers insight into the number of curves, steepness, and number of stunting features ahead.  Each world is punctuated by a ‘boss battle’ where players face hazards like a gargantuan jump. Emerge victorious three times and you’ll open the path to the Descenders next environment. 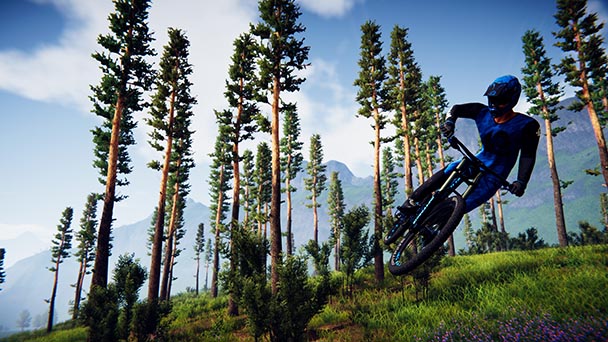 Yesteryear’s extreme sports genre wasn’t known for autonomy. Save for the Tony Hawk series, most franchises had a prescribed path of success. But Descenders feels remarkably different. Sure, there’s incentive to take chances by reaching a certain speed threshold or completing specific stunts. But largely, the amount of risk is larger under your control. Want to cruise though a succession of courses? You can play it safe, opting to avert tricky elements like castle turrets by veering off the track and circumventing the entire structure. But since grandiose stunting earns reputation points (shortened to ‘rep’), which is used to secure a place on the leaderboards, danger is driven by your own sense of egotism, rather than anything the game forces on you.

Another area where the game innovates is rooted in the health system. You begin each excursion with four health points, earning an extra one anytime you complete one of the aforementioned bonus objectives. Minor bails unsurprisingly remove a health point before sending you back to the last checkpoint. But when you’re traveling about 50km/h and wipeout, you’ll lose two points, making you think twice before you daredevil your way through a course. Even more worrisome, crashes subtract one percent of your rep, lending a sense of investment to your virtual cyclist. 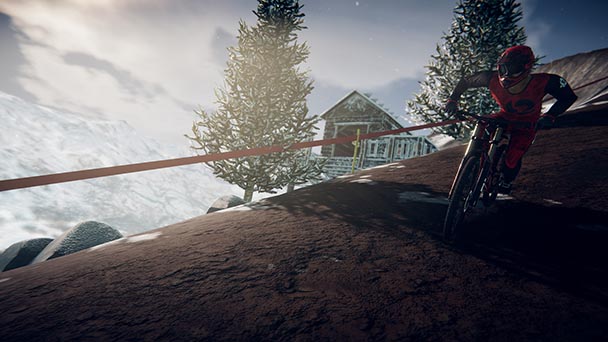 While the embryonic nature of most Early Access title makes them difficult to recommend, Descenders easily offers enough enjoyment to justify it’s purchase price. While there’s currently multiplayer component and leaderboards can be problematic when applied to procedurally-generated courses, neither of these infringe on the amount of fun it can be to tackle the game’s downhill tracks. For anyone that laments that lapse of the extreme sports genre, RageSquid brings the thrills, and gratifyingly the cliched heavy metal wailing has given way to silky electro beats.