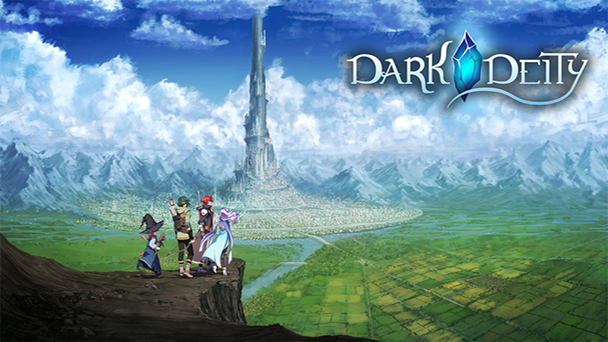 Outside of emulation, Dark Deity is the closest PC players might get to the storytelling and sprite-based skirmishes of Game Boy Advance-era Fire Emblem. If the developers can sort out some of the game’s issues, Deity will definitely be worth diving into. 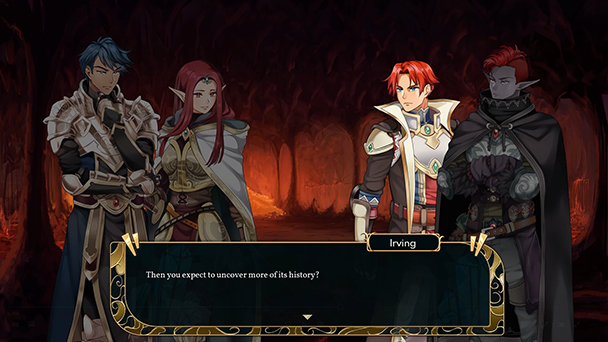 Many developers would like to replicate the commercial and critical success of strategy role-playing franchises like Fire Emblem, Disgaea, Final Fantasy Tactics. Tragically, a small number actually succeed.

Success within the genre hinges on two traits. First, an entry must offer a stimulating storyline built around a cast of well-written characters. Without a compelling plotline, there’s little motivation for conflict. Secondly, SRPGs are astonishingly complex works with intricate algorithms which juggle hundreds of statistics. Prodding players to upgrade their equipment, extending thorning decisions about the growth of each adventurer, and endowing each battle with nuance is a subtle art.

Given the thirty-year legacy of the SRPG and the constrained number of truly noteworthy efforts, proficiency seems unlikely for a group of upstarts. But like a mid-level adventurer taking on a late-game boss, developers Sword and Axe offer a valiant attempt with Dark Deity. Although several blemishes taint the experience, there’s a lot of ambition rooted in their inaugural title. 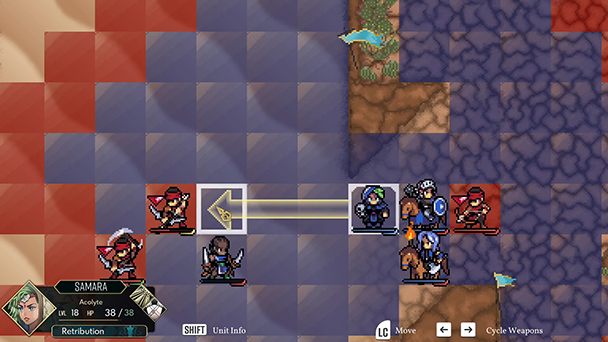 Writing That’s a Cut Above

Dark Deity opens with conflict that might sound familiar to high fantasy enthusiasts. There are the obligatory magical artifacts left by a civilization who succumbed to ‘the calamity’. Naturally, these relics are sought by an assortment of moralities. King Varic Val’Distar, who inherited the rule of the Delian Empire after his father was mysteriously assassinated and subsequently burned a city to the ground is one of these figures and hopes to stop the relics from falling into even more merciless hands. This means that students at the prestigious Brookstead Military Academy will skip their drills for some hands-on learning in the field.

The game’s cast is numerous, with over thirty different playable adventurers. Initially, you’ll seize command of Garrick, Irving, Maren, and Alden, who are all built around recognizable tropes. From the confident swordsman and his archer buddy, the young, inexperienced mage and his protective, healing spell-casting sister, you’ll undoubtedly find familiarity. But the quality of the prose, gratifying character arcs, and the way the game builds personality on top of conventional formulas, elevate Deity above many of its peers.

While many games offer some kind of omniscient narration, Dark Deity favors the points-of-view of its cast members, making the story feel just a bit more intimate. The downside to this approach is that you’ll jump from one situation to the next, without much transitional substance. Sporadically, you might even feel rushed, longing to linger around a context rather than being shuffled off to the next one. 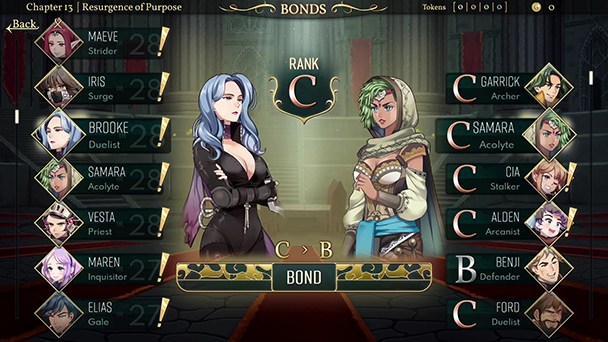 Like several popular franchises, players have some control over the amount of exposition. Connecting interpersonally away from the frontlines, characters are able to build three level of social bonds with their colleagues. The result is over 450 different optional conversations, but you’ll only see a faction of these during a single playthrough.

Both friendly kinships and affections can materialize, resulting in slight stats boosts when the partners revisit the battlefield. Although I didn’t witness any kind of formal commitments, these conversations revealed backstories, provocations, and aspirations, ultimately helping to flesh out the game’s cast.

These disclosures mean you’ll probably feel protective when the cast steps back out into the fray. Pleasingly, Dark Deity provides variety to mission structure, and you’ll be tasked with everything from defeating an entire platoon, defending an area, or taking down a single boss. 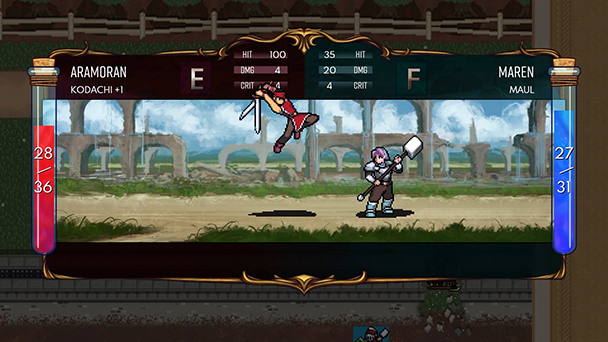 Likewise, there’s plenty of variability in encounters, with units having up to four different abilities and access to different weapon types. With selections between damage amounts, critical frequency, accuracy, or a balance between types, weapon types plays a crucial role in team management. While some might appreciate a bow user who can one-shot a foe before they draw close, others will rely on a reliable unit who won’t wiff during a pivotal attack.

Dark Deity also provides flexibility when it comes to character skills. Each unit has their own distinctive ability and you’ll be able to harness new ones as you level up and make class selections. But you’ll also have to deal with variabilities. Stats boosts at each level increase are randomized. Although you can pay to augment character stats, doing so is rather expensive. Defeat on the battlefield brings its own unpredictability with stats penalties when a unit is defeated. Pleasingly, the system doesn’t feel as punitive as permadeath.

Likewise, there’s a wealth of options that can customize the game experience. Some, like randomizing enemy weaponry and stats can ruin any sense of balance but make for a decidedly unpredictable adventure. Most might find the sliders than adjust variables like the dividends of experience, gold, or even the rate that new adventurers appear more useful. That said, some traditional traits like replaying chapters to help build up units are oddly absent. 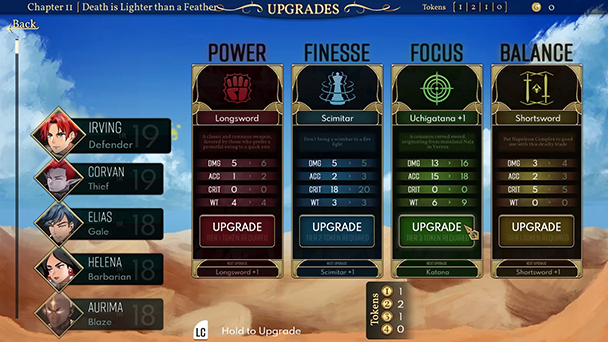 Dark Deity’s character portraits do an adequate job at bring the cast to life, as do the Fire Emblem: Awakening-style fragments of voice acting. But the bulk of the game’s visual delights stem from the artwork that evokes Fire Emblem: The Blazing Blade’s sprites. Here, rivals are situated on opposite sides of the screen, and draw bows, swing swords, and cast spells with a bit more fluidity than the eight-bit era. It’s a shame that the environments aren’t as attractive and are a bit rudimentary. Additional detail and a greater number of assets would certainly help the title. Adding different terrain types and corresponding stat adjustments could add nuance to the game’s maps.

But that’s hardly the biggest issue at present. The current build can crash at the end of chapters, while either mouse-and-keyboard or controller support isn’t as seamless as it should be and occasionally selecting units can be cumbersome. While Dark Deity offers a succinct tutorial, many of its system don’t receive any kind of explanation, which could be frustrating for newcomers and even intermediate strategists.

Personally, I’d like to see a greater diversity with weapon ranges. As it stands, melee units tend to be useful on adjacent spaces, while most bows typically only reach two squares. While there’s a sniper class, I’d love to see more long-range archers who need protection, adding additional tactical options. 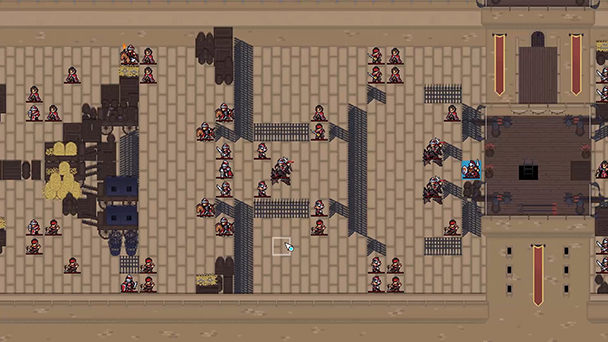 Attempting to tackle the statistical complexities of a strategy role-playing is demanding, especially for an upstart. Dark Deity shows mastery of many fundamentals, with challenging but fair battles, and a sense of autonomy when it comes to comes to weapon usage and character growth. But sporadically, the game can feel like an Early Access effort. Retail builds should crash with worrisome frequency and core components like control schemes should be bug-free. At present, there’s potential, and if Sword and Axe can hunt down these critical bugs, Dark Deity could be prodigious.

Dark Deity was played on PC with review code provided by the publisher.

Dark Deity review
Outside of emulation, Dark Deity is the closest PC players might get to the storytelling and sprite-based skirmishes of Game Boy Advance-era Fire Emblem. If the developers can sort out some of the game&rsquo;s issues, Deity will definitely be worth diving into. Many developers would like to replicate the commercial and critical success of strategy role-playing franchises like Fire Emblem, Disgaea, Final Fantasy Tactics. Tragically, a small number actually succeed. Success within the genre hinges&hellip;

Summary : Although Dark Deity has its share of issues, the foundations are incredible solid, making for a experience where story and skirmish intertwine rather nicely.