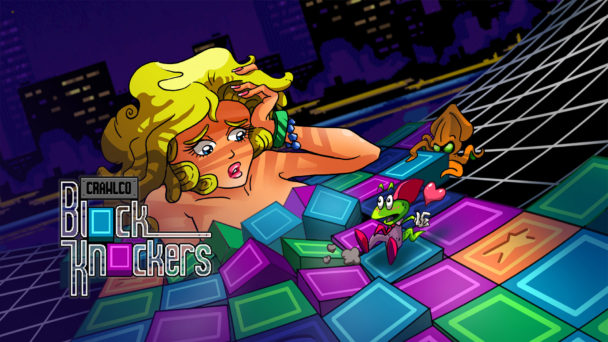 Come for the skin, stay for the play. Crawlco Block Knockers bares some optional sexiness, but the real allure is the ingenuity of this recreation. This is easily one of the top ten arcade-inspired title found on Switch. 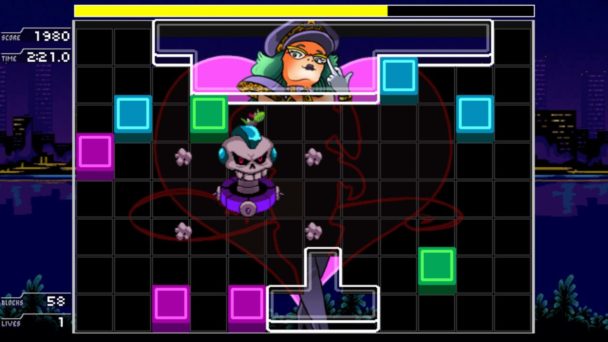 One of the more interesting entries ‘90s-era arcade gaming was the Gals Panic series. Iterating on Taito’s Qix, players were tasked with removing sections of the playfield, revealing images of pin-up beauties beneath. With on-screen foes that often moved and attacked unpredictably, it was not the most polished series, but at the end of every three rounds, there was a glimpse of a pixelated boob or butt. Unsurprisingly, this was just enough incentive to generate a steady drip-feed of 100-yen coins.

Reinvigorating the spirit of coin-operated eroge, Crawlco Block Knockers delivers the allure of Gals Panic alongside gameplay that is considerably more refined. Let a Seven Stars cigarette dangle from your lip and pour yourself a Suntory Yamazaki single malt (with obligatory spherical ice) and you have created some of the best time portals to pre-bubble Japan around. 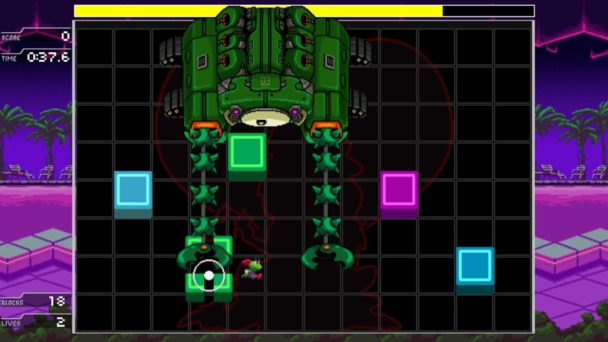 While advancement still requires players to reveal a specific percentage of the playfield, Block Knockers eschews the cutting mechanic of Qix. Take a cue from SEGA’s Pengo, progress is made by sliding giant cubes around. Matching three or more blocks of the same color or smash an enemy with a slab and you’ll expose part of the background image, which are mildly risqué anime-styled drawings. For those with an aversion to nipples or backsides, Block Knockers lets you turn the lewdness down with two types of filters. Unlike Gals Panic, nudity isn’t the only incentive. Gameplay that is proficient enough to stand on its own is the true incentive.

Progress across the game’s campaign is made easier when you acquire advanced techniques. Beyond sliding a square across the playfield, you can also pull cubes as well. Block Knockers also lets the game’s bug-like protagonist jump onto and walk across elevated sections. But the most satisfying move in your arsenal is a pull that quickly transitions into a backward. It’s perfect for when you need to quickly move a cube that’s blocked in. Sure, the timing can be a slippery, but with a bit of practice you’ll be hurdling over blocks and sending them into unsuspecting foes, which feel invigorating.

When It All Comes Crumbling Down

The task at hand is always sufficiently challenging, requiring reveals on the playfield’s periphery. What makes so Block Knockers so engaging is that catastrophe sneaks up on you. A single misplaced block might jam up the midfield, making connecting cube that much harder. Surprisingly, boss battles are one of the game’s high points, and you’ll face off against foes who perform actions unavailable to subordinates. Instead of merely identifying attack patterns, these foes demand mastery of navigational methods.

With a lively vaporwape soundtrack from Opus Science Collective and campaign structure that adds cohesion to the game’s ever-intensifying stages Crawlco Block Knockers is a pleasing package. While we’d love to see a two-player co-op/competitive component, the game’s eight-dollar price is incredibly reasonable, given the amount of retro fun found here. Certainly, that accompanying glass of Suntory won’t be nearly as economical. 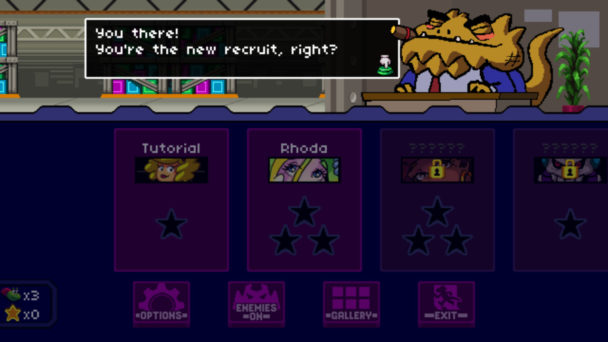 Crawlco Block Knockers mini-review
Come for the skin, stay for the play. Crawlco Block Knockers bares some optional sexiness, but the real allure is the ingenuity of this recreation. This is easily one of the top ten arcade-inspired title found on Switch. One of the more interesting entries &lsquo;90s-era arcade gaming was the&nbsp;Gals Panic&nbsp;series. Iterating on Taito&rsquo;s&nbsp;Qix, players were tasked with removing sections of the playfield, revealing images of pin-up beauties beneath. With on-screen foes that often&hellip;