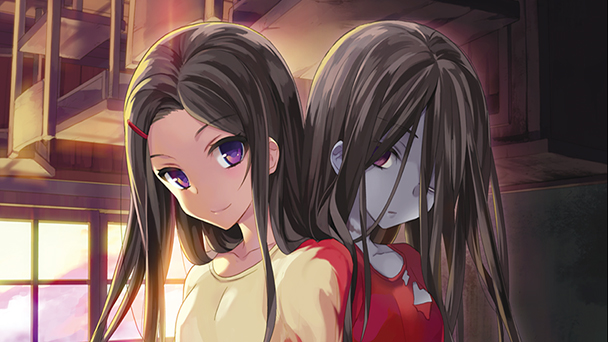 Cultivated over half a century, the term omake is rather prevalent in Japan. Translated to ‘extra’ or ‘bonus’, the term refers to everything from small trinkets given with the purchase of food or drink to the inclusion of special features such as interviews and short animations on a Blu-ray release. Over time the concept would branch and grow into the production of fandisks (or ‘FD’s), standalone packages that continue storylines, or offer ‘what if’ scenarios with the characters from popular properties.

As such, these derivative works are aimed at devoted fans rather that newcomers, limiting their marketability. In markets outside of Japan, fandisks are consumed by a niche of a niche, which probably explains their rarity in these regions. With the release of Corpse Party: Sweet Sachiko’s Hysteric Birthday Bash for PC, devoted followers of Team GrisGris ghoulish franchise are now privy to a localized version of the original 2012 PSP release. 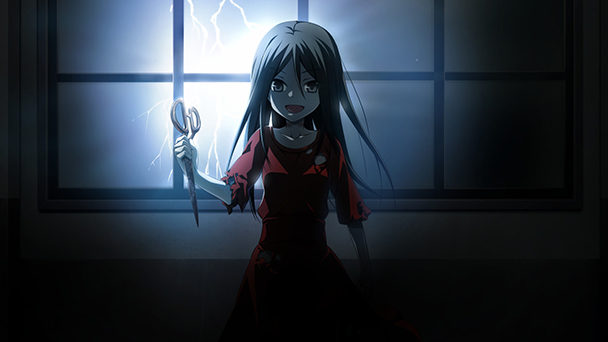 But before venturing to Heavenly Host Elementary School, the reoccurring setting for the franchise, you’ll undoubtedly want to familiarize yourself with the property. Like most fandisks, there’s little summarization of character or context. Sure, they’re some case books which provide a broad timeline and character info, but the latter require unlocking first, undermining their functionality.

As the moniker implies, Sweet Sachiko’s Hysteric Birthday Bash extends a ghoulish mixture of merriment and mayhem. It’s franchise antagonist Sachiko Shinozaki’s seventh birthday (once again, because she’s dead) and the game’s prologue has her uniting with Yoshikazu Yanagihori, and holding an assembly reuniting nearly forty different characters. While some will be familiar with those who played Corpse Party, Book of Shadows, or read Blood Covered, the forty-seven chapter manga, others are ‘nametag’ subordinates poised to test your franchise familiarity. 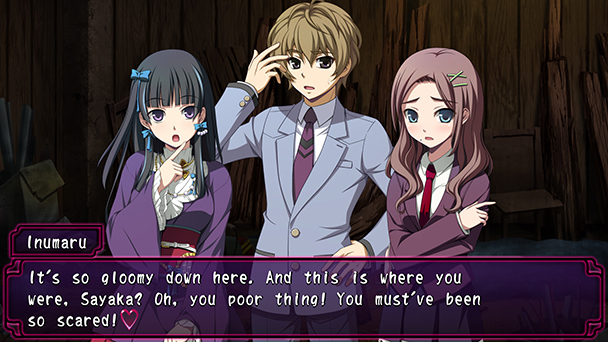 Both the preamble and the rest of the game showcase Sachiko’s duality. Prone to selfish, child-like behavior exacerbated by an isolated childhood, she’ll divulge the occasional expression of delight. But most of the time the source of her happiness is found in the sadistic torture of others. That’s a muddled standpoint that few games have explored. But tragically, Hysteric Birthday Bash doesn’t always make good on it’s potential.

Reverting to the visual novel-style delivery and structure of Book of Shadows, Birthday Bash is comprised of eight chapters as all as one extra chapter. Since most fandisks are non-canonical, it’s not surprising to find that the octet of chapters aren’t part of franchise storyline. After the birthday is over, those involved return to their spectral state, seemingly disremembering the torturous acts inflicted here. The sole exception is found in the extra chapter, which introduces two new characters from the St. Cruz School for Girls, Azusa Takai and Ran Kobayashi. As such, this addendum is easily one of the highlights of the package, as it mirrors the kind of scenario found in the mainline Corpse Party games. 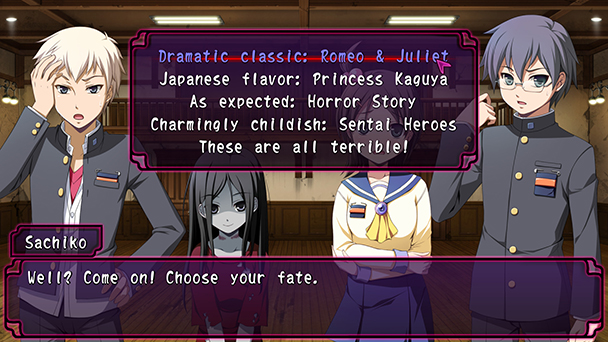 Each of the novel’s eight chapters is built on a similar set-up, with Sachiko creating some type of challenge for students to flounder in. In the first chapter “The Shame on The River Kwai” the birthday ghoul sets up an obstacle course for participants, pledging that the winner will be able to leave with the person of their choice. What ensues are unnerving takes on harem romances, tentacles, crossdressing, and a bit by Corpse Party’s resident anatomical model, Kizami Yuuya.

Like the subsequent chapters, those who never experienced the property will wonder just what the hell is going on. Enjoyment stems from understanding the characters and their relationships. So, when Sakutaro Morishige begins to take gleeful pleasure and adopts a role when wearing a maid uniform, it references his infatuation shown in Book of Shadows, once again revealing a hidden side to the character. But unless you’ve played the game, the allusion will go unnoticed. For some the series trademark ‘Dead Ends’ might be irritating. But if you try to get into Sachiko’s headspace and make use of the text skipping option, the ghoulish culminations aren’t too annoying. Maybe there’s something wrong with me, but I found some rather comical. 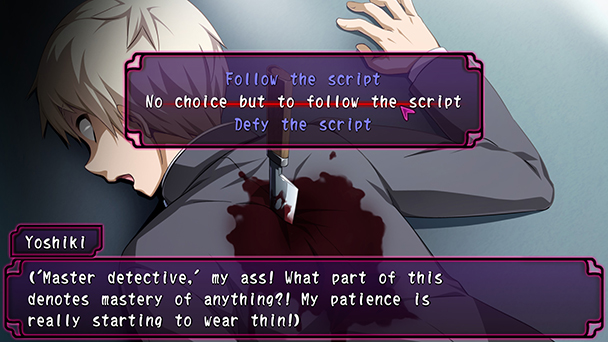 But even those well-verse in Corpse-lore might find fault with the game at times. Quite often, Hysteric Birthday Bash has the tendency to fill scenes with extra characters. As such, you’ll need to pay attention to who is talking as the novel doesn’t always offer a visual highlight for the speaker. Even if you don’t understand Japanese, it’s impossible to miss the emotion conveyed through voice acting. Woefully, only a portion of the dialog is accompanied by performance. On the upside, Tom Lipschultz’ last localization for XSEED is a winner, capturing the macabre spirit of the proceedings.

With fandisks making their way West, there’s one essential rule: make sure you’re familiar with the property before venturing on to these supplements. Only when you find yourself craving more from a franchise should a purchase be considered. If that’s the case with Team GrisGris/5pb’s bloodcurdling series, then Sweet Sachiko’s Hysteric Birthday Bash shift in tone might be a welcome departure. 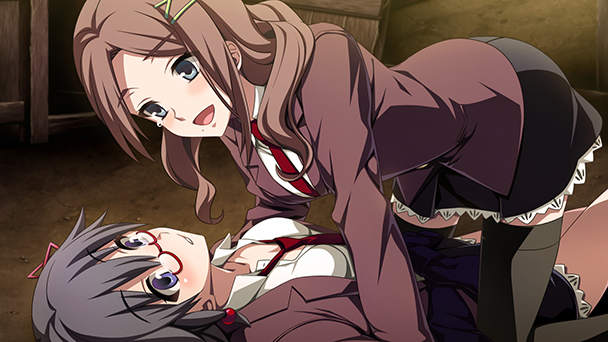 Corpse Party: Sweet Sachiko’s Hysteric Birthday Bash review
Cultivated over half a century, the term omake is rather prevalent in Japan. Translated to &lsquo;extra&rsquo; or &lsquo;bonus&rsquo;, the term refers to everything from small trinkets given with the purchase of food or drink to the inclusion of special features such as interviews and short animations on a Blu-ray release. Over time the concept would branch and grow into the production of fandisks (or &lsquo;FD&rsquo;s), standalone packages that continue storylines, or offer &lsquo;what if&rsquo; scenarios with the characters from popular properties. As such, these derivative works are aimed at devoted fans rather that newcomers, limiting their marketability. In markets outside&hellip;

Summary : Don’t consider visiting Heavenly Host unless you’re thoroughly familiar the franchise. But those who have ventured through its haunted halls might appreciate Hysteric Birthday Bash’s outrageous scenarios and seeing Sachiko’s sadism in a slightly come humorous context.