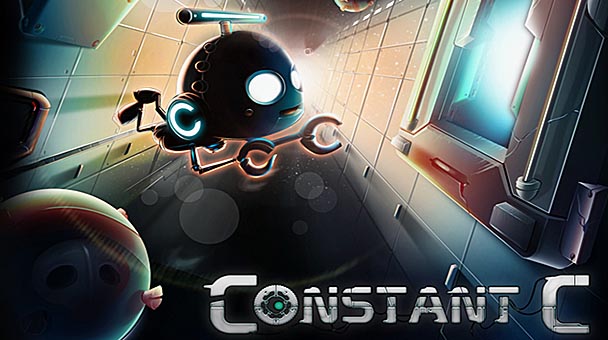 Puzzlers typically follow a predictable trajectory, steadily increasing in difficulty level as players tackle each successive conundrum. Distinction stems from just how strenuous the game becomes. The recent Steam release of International Games Systems’ Constant C starts off innocuously enough- as players take control of a small service droid tasked with collecting power cores in a derelict space station. Maneuvering the protagonist with either the PC keyboard or an Xbox 360 controller reveals a sense of vulnerability, as the robot can’t jump very far and is unable to survive an elevated fall. Fortunately, the affable automaton has a few abilities to help him navigate this hostile setting. Foremost is the Time Circle, a blue aura which surrounds players, allowing them to free objects from a state of temporal stasis.

Gamers will soon discover that as long as this circle touches objects, time becomes unfrozen, forcing floating boxes to be affected by the law of the gravity or allowing shifting platforms to become operational. Pleasingly, Constant C’s learning curve exhibits a slow ascent, with each sub-stage articulating both a challenge and tutorial for players. When players inevitably fail, whether being squashed by a plummeting object or falling into a chasm, death isn’t an insurmountable hurdle. Respawns occur in the adjacent vicinity (leaving an indelible mark on the background) eliminating the need for excessive backtracking. 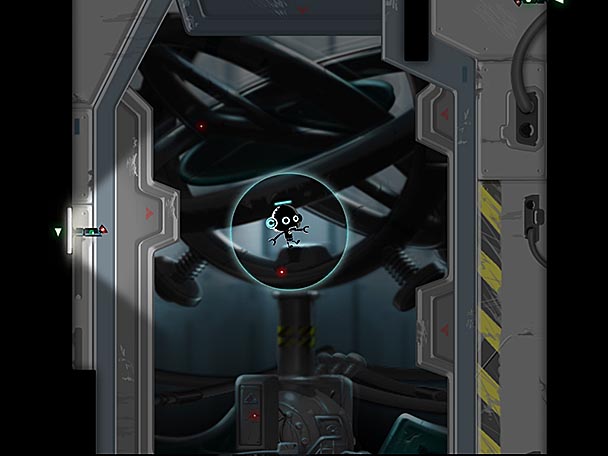 Early on, these fatalities occur infrequently, as players absorb the workings of Constant C’s world. But gradually, the game starts presenting additional mechanical complexities. Switches around the environment rotate room around putting the protagonist or any unfrozen objects into motion. Gates appear, which will only swing open a specific way- often creating additional obstacles for gamers. Later, the title throws even more complexities at players- requiring the robot to shift gravitational directions, mid-fall. Naturally, the game’s puzzles take advantage of these new gameplay elements, obliging players to create enough momentum to send the robot sailing over floors filled with deadly objects.

Before long the once-benign interiors of Constant C become replaced with revolving saw blades, searing lasers, and electrified walls, and the level of adversity rises to near impenetrability. Stages seemingly ask the impossible, requiring the protagonist to leap beneath a giant cube as it passes past a series of crisscrossing laser beams- all before switching the direction of gravity to avoid imminent tragedy. Prevailing over these predicaments typically requires a combination of puzzling knowhow, patience, and razor-sharp reflexes. As such, gamers without this trifecta of qualities or ones which loathe trial-and-error based gameplay will likely quit in frustration before seeing Constant C’s hundred or so stages. Those who have the will to persevere will often have to make minute adjustments on their strategies, sporadically tackling the same quandary dozens of time until everything comes together. 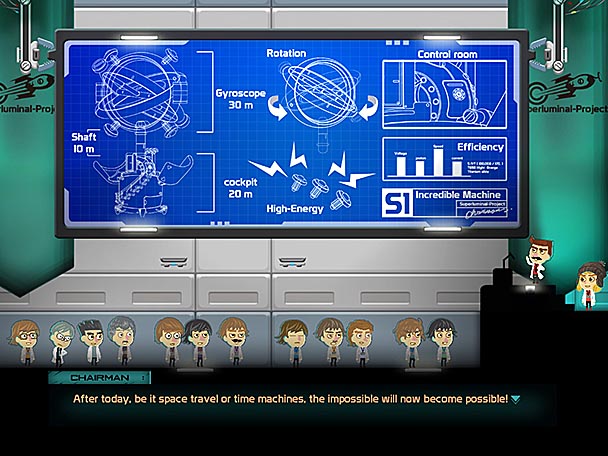 Unsurprisingly, the delight of triumph is correlated with the size of the struggle, with the game’s most arduous challenges bringing about a muted sense of euphoria. Mercifully, Constant C tries to avoid having players reach a brick wall during their trek. Although the collection of fiendishly placed power cores opens new stages in the main hub, players can finish levels without having to grab the collectable. Once the power core is grabbed, the game records the achievement, ensuring that players don’t have to repeat the task if they should perish. Of course, there’s plenty of incentive to grab the power cores- not only do these unlock later level, but they also help to fill out the game’s plotline.

Narratively, Constant C frontloads its expositionary elements, devoting just enough motivation for story-minded players. Beyond brief conversional bits, the title does an admirable job of conveying emotion through the game’s aesthetics. Visually, the space station’s shadowy and desolate halls create a sensation of menace and isolation, while the robot’s variety of facial animations divulge his sense of resolve. The game’s subdued soundtrack is to be commended- with its hushed tones and ambient sound effects also helping to articulate the feeling of isolation. 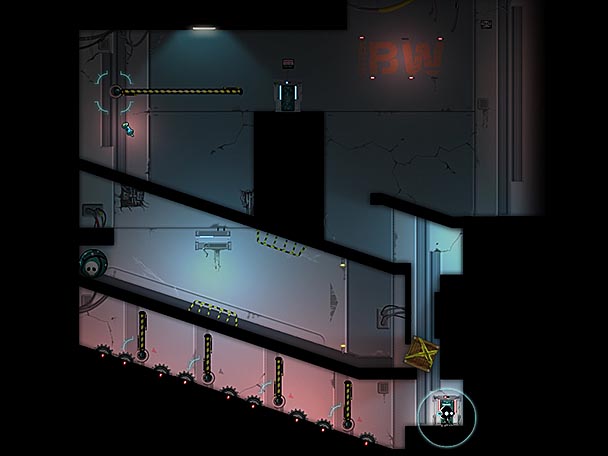 The easily frustrated will want to steer clear of Constant C’s action-driven conundrums- which require a combination of cerebral calisthenics and ninja-caliber reflexes. But players with a bit more patience might appreciate the game’s sadistic trials. There’s an undeniable sense of satisfaction which warms players when a plan is executed with meticulous precision. In the world of physics c refers to the speed of light in a vacuum- the threshold of speed for energy, matter, or information. Likewise, Constant C pushes players to their mental and physical boundaries, all in an effort to conquer the seemingly impossible.

Constant C was played on the PC with review code provided by the publisher. The game is also available for the XBox 360 via digital download, and priced at $9.99.

Constant C Review
Puzzlers typically follow a predictable trajectory, steadily increasing in difficulty level as players tackle each successive conundrum. Distinction stems from just how strenuous the game becomes. The recent Steam release of International Games Systems&rsquo; Constant C starts off innocuously enough- as players take control of a small service droid tasked with collecting power cores in a derelict space station. Maneuvering the protagonist with either the PC keyboard or an Xbox 360 controller reveals a sense of vulnerability, as the robot can&rsquo;t jump very far and is unable to survive an elevated fall. Fortunately, the affable automaton has a few abilities&hellip;

Summary : Despite its benign introductory levels, Constant C is capable of enraging the most imperturbable gamers with its blending of puzzles and platforming.