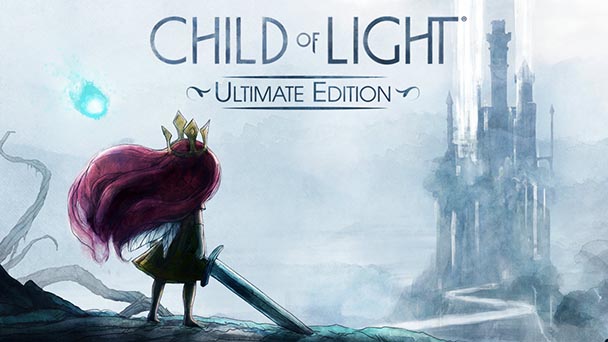 When franchises such as Final Fantasy, Phantasy Star, Suikoden, Grandia, and Lunar became embraced by global audiences amidst the 1990s, many believed that these engaging JRPG experiences would influence the output of North American and European studios. Likewise, the work of Western studios would inevitably be studied and scrutinized back in Japan, resulting in a rich, transcontinental dialog of design decisions. Regretfully, this cycle of inspiration never really came to fruition, with stateside studios relying on Tolkien-esque tropes and Japanese developers habitually catering to the otaku culture. Over the ensuing decades, a full-fledged marriage of Eastern and Western philosophies grew increasingly unlikely.

As the storyline of Child of Light reminds us, triumph often starts in unlikely places. Crafted by creative director Patrick Plourde and penned by writer Jeffrey Yohalem (a duo who previously worked together on Far Cry 3) the title is refreshingly incongruent, shirking a sense of bombastic spectacle for an affecting adventure which demonstrates the virtues of subtlety and restraint. While the title’s blend of platforming and turn-based battles might draw comparisons to tri-Ace’s PlayStation title, Valkyrie Profile, in execution Child of Light channels Team ICO’s sense of poignancy and muted charm. 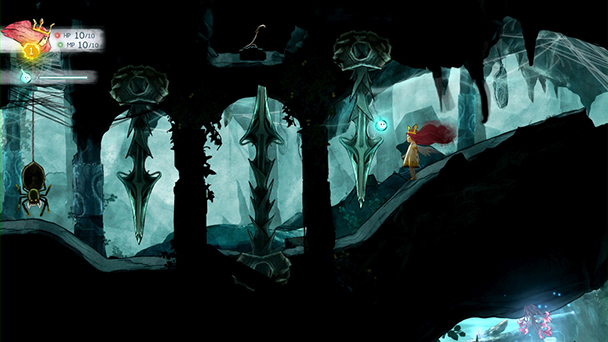 Constructed of rhyming verse and storybook-like renderings, the title’s prologue details the story of Aurora, a crimson-haired Austrian heiress who falls ill, awaking in a mythical land called Lemuria. Once a realm spilling with natural splendor, a nefarious Dark Queen has stolen the sun, moon, and stars-  effectively disfiguring the domain. Players assume the role of Aurora, as well as a valiant blue firefly named Igniculus, and encounter a number of secondary, supporting characters outfitted with their own backstories and motivations. Collectively, the party of adventurers struggle to eradicate despair from Lemuria, replacing the darkness with revitalizing light. Far removed from the type of lurid fan service which fuels many contemporary JRPGs, Child of Light’s plotline evokes a fairy tale-like ambiance built upon a compilation of dualistic oppositions, allowing a wide demographic to enjoy the title.

Powered by the UbiArt Framework engine, which was used to deliver the sumptuous backdrops and fluidly moving sprites of Rayman Origins and Legends, Child of Light employs an aesthetic which seems culled from a vintage picture book. Muted watercolors breathe life into Lemuria’s numerous milieus, as pathways slice through bristly brush, burrow into shadowy caverns, and pass shimmering streams. Creatively brims throughout the journey, as when players stumble upon a cluster of characters that the Queen has transformed into crows- yet the group retains their humanly artifacts of hats and pipes. Mirroring the aforementioned Ubisoft Montpellier-developed titles, Child of Light’s animation is consistently sinuous- highlighted by Aurora’s billowing mane and diminutive but evocative gestures such as when the heroine stalwartly retrieves her toppled crown. Likewise, Cœur de Pirate’s (née Béatrice Martin) soundtrack shifts between plaintive piano melodies and battle hymns which channel the works of Nobuo Uematsu. 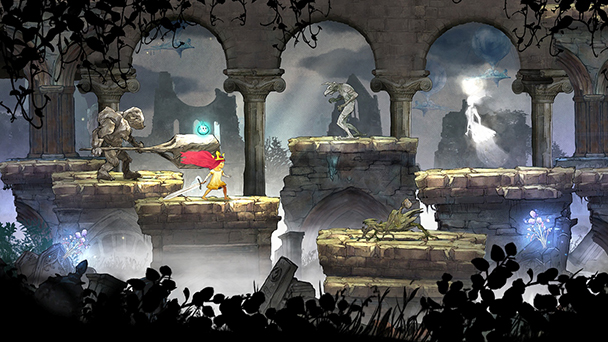 As a reminder of Lemuria’s lost splendor, small trees dot the landscape, each blooming with Whispers- tiny, glowing pods capable of replenishing health and magic points. When playing Child of Light alone, the right analog stick or a touchscreen swipe can send Igniculus to harvest these orbs. Alternatively, the firefly can be controlled by another player, much like Murfy’s assistance from Rayman Legends. Periodically, the two work cooperatively, casting shadows or light beams on objects to resolve the game’s puzzles. If Child of Light can be faulted, blame can be placed on the title’s cerebral challenges, which might be a bit too simplistic for experienced gamers. Ideally, the game’s elevated difficulty setting would have earned its own set of testing conundrums for those well versed in switch pulling and crate shifting.

While the title’s puzzles don’t extend scalability, combat masterfully does. Once Aurora comes into contact with a creature in the wild, the game shifts to the battle screen, pitting two switchable allies against a small number of enemies. Initially, the combat seems straightforward, with turn order determined as icons travel along a single action gauge. Once a portrait moves into the meter’s “Cast” area, time halts- allowing the character to choose from a selection of melee, magic of defensive maneuvers. Nuance enters in through the interrupt mechanic- which allows either a friendly or enemy to disrupt the turn of others. Igniculus also comes into play, allowing players to slow enemy icons or even heal allies. Naturally, the assistant’s powers are limited and imprudent gamers might find themselves in an increasingly underhanded situation. Battles are at their best when players are forced to micro-manage their whole party or min-max their way to victory against elementally-based bosses. 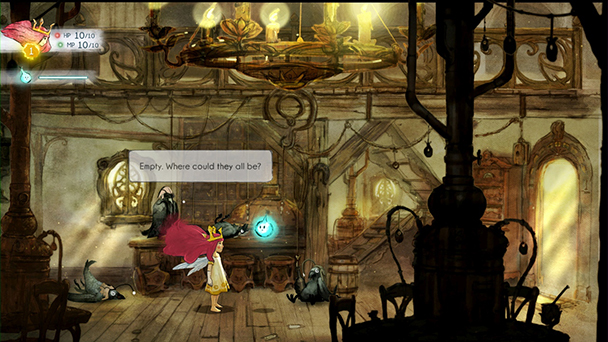 Adeptly, Child of Light’s encounters against elevated enemies require little grinding, but the game does offer an ample number of side-quests should players find themselves struggling against a specific antagonist. And given the game’s expedited leveling system, players need only tackle a few of these auxiliary activities.  Two other possibilities extend the possibility of a helping hand: elongated tech-trees and a simple crafting system. The former provides a simplified roster of active and passive perks while the latter allow players to merge Oculi- gems which offer elemental resistance and abilities. While most contemporary JRPGs interrupt the action to force players to read through tutorials, Child of Light’s extends only essential tutelage, favoring easy to understand mechanics and gameplay which gradually goads gamers to extrapolate.

For the Ultimate Edition, Ubisoft bundles the game with all of the downloadable content into an economically-priced package. The biggest perk here is The Golem’s Plight Pack, which extends a side-quest, a number of Oculi, and the eponymous character as an ally once the undertaking is completed. And while the amenities also include additional Oculi, mercifully they’re not need for competition or enjoyment in the New Game+ mode. 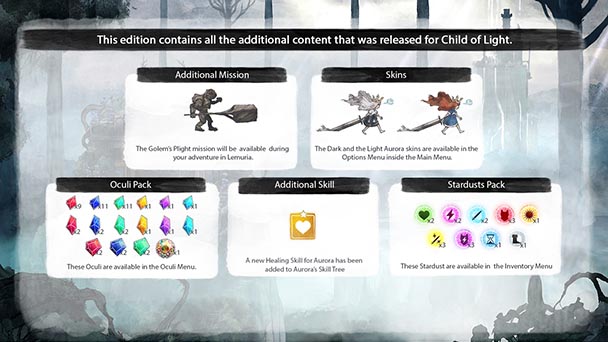 The Switch iteration of Child of Light preserves much of the original console game’s visual splendor. Sure, there’s the sporadic framerate drop, but largely it’s rare and gentle enough to not be too much of an impediment to the sense of immersion. So while this version offers a higher fidelity that the previously released Vita one, those who are particular about refresh rates will want to seek out Child of Light on console.

Skillfully, Child of Light doesn’t imitate Japanese role-playing conventions, but rather uses these tenets as a framework for an enchanting and distinctive experience. Blending an exquisite art style, enjoyable play mechanics, and a design which eschews many complexities, the title is the rare entry capable of pleasing both aficionados and apprentices. Hopefully, other studios around the world take note and build on Child of Light’s prodigious blueprint. 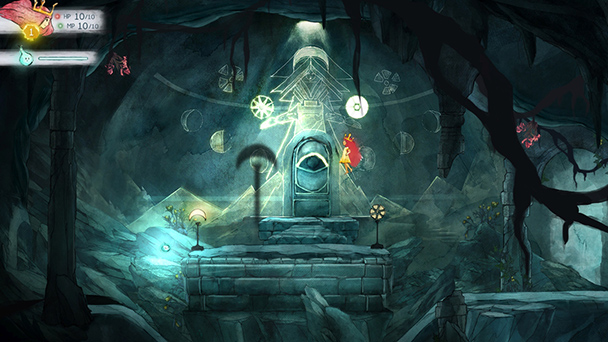 Child of Light was played on the Switch
with review code provided by the publisher.

Child of Light: Ultimate Edition review
When franchises such as&nbsp;Final Fantasy,&nbsp;Phantasy Star,&nbsp;Suikoden,&nbsp;Grandia, and&nbsp;Lunar&nbsp;became embraced by global audiences amidst the 1990s, many believed that these engaging JRPG experiences would influence the output of North American and European studios. Likewise, the work of Western studios would inevitably be studied and scrutinized back in Japan, resulting in a rich, transcontinental dialog of design decisions. Regretfully, this cycle of inspiration never really came to fruition, with stateside studios relying on Tolkien-esque tropes and Japanese developers habitually catering to the otaku culture. Over the ensuing decades, a full-fledged marriage of Eastern and Western philosophies grew increasingly unlikely. As the storyline of&nbsp;Child&hellip;

Summary : Proving that Western role-playing games don’t have to be solemn affairs ala Skyrim and Fallout 4, Child of Light draws inspiration from Japan’s rich role-playing legacy.