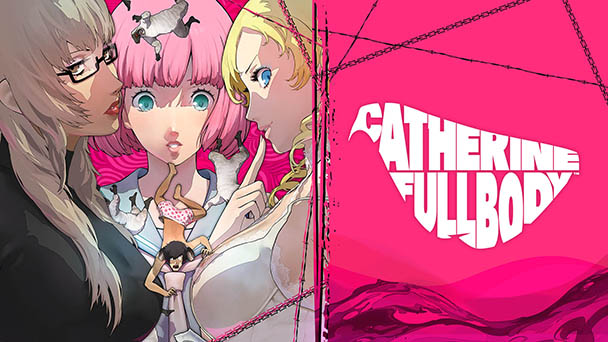 Catherine heads to the Switch with a proficient port that captures all the romantic tension, surreal puzzling, and competitive climbing of the PlayStation 4 iteration. Since the Vita version never got localized here, this marks the first time stateside players will be able to Vincent’s tortured psyche in portable form.

Despite obsessions with hyperbolic violence and titillation often rooted in a teenaged sensibility, there are signs of maturation in gaming. Faced with refreshingly pensive objectives, Catherine: Full Body challenges participants to prevail against the type of dilemmas faced by the average thirty-something. When the title was originally released nine years ago, Atlus’ marketing efforts might have played up the title’s sexiness, but Catherine remains worlds away from the kind of lusty fan-service that dominates gaming’s representation of sexuality.

Hardly the archetypical protagonist endowed the agency, Vincent Brooks is a timid thirty-two year-old whose existence is governed by complacency. Tension arises when Vincent’s long-time girlfriend, Katherine McBride, yearns to become the marital partner that her surname suggests. Following a round of drinks with a band of bachelor friends, Brooks’ routine is upended by Catherine- a spirited and adventurous young women who is the polar opposite of his prim partner. While subjects such as the viability of a long-term commitment and fidelity will certainly resonate with a demographic, all should enjoy watching Vincent’s increasingly madcap emotional downfall. Cleverly, the developer prohibits gamers from associating too closely with the protagonist, framing the game as a pulpy television program. 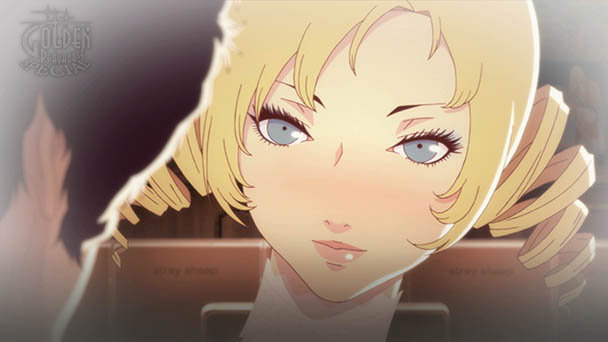 Those who played the original 2011 release or the more recent PC port are in for several expositional delights with Full Body, the same additions woven into last year’s PS4 release. Here, we briefly see Vincent and Katherine as teenagers. Knowing the imminent impasse that will arise when they’re adults, the flashback is gratifying, speaking to the mutability of relationships while contributing complexity to Katherine. But the biggest change is the integration of Qatharine, or Rin. Tampering with the original game’s taut dichotomy was a pretty big risk, but the inclusion is handled impeccably. Unsurprisingly, this introduces several new endings, with the allure of unconditional love fitting quite nicely within the game’s romantic tensions.

Lest you think the game is an esoteric exercise in navel-gazing, Catherine surrenders a tall tower of conventional, adrenaline-pumping action-puzzling. Here, Altus’ Shin Megami Tensei team allows players to peer into Brook’s guilt-ladled psyche- a landscape dominated by pillars of blocks, egotistical sheep, and the unnerving klaxon of church bells. Across each evening of the game’s nine-night duration, players are thrust into Vincent’s subconscious, where they must push, pull, and navigate their ways to the top of the screen. As players persevere, these stages become increasingly frantic with additional nuances designed to prohibit your ascent to the top of the tower, and back into the game’s storyline. The Western release dialed down the intensity of the original Japanese release. With Full Body, puzzling becomes elective, allowing players without the patience for puzzling to follow the game’s plotline. 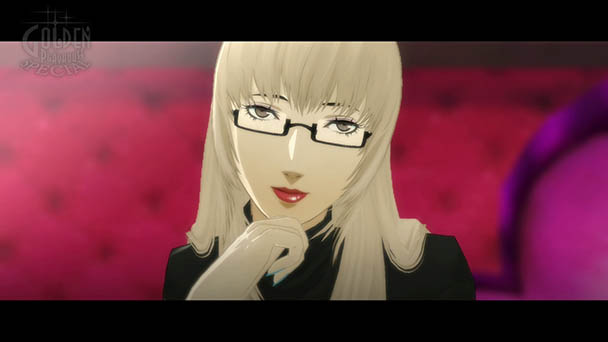 But, even on the game’s ‘easy’ setting, Catherine‘s climbing and block manipulation is no pushover. If the developers were hoping to illicit a sense of panic in players, they’ve succeeded marvelously. With a constant crumbling base, bosses which drop down control-reversing hearts, and tongue blocks which threaten Vincent with a lethal licking, pulses are certain to rise. Yet, despite a lofty level of challenge and the sporadic frustrating fumble, Catherine‘s climbing game will maintain a player’s interest, especially with the inclusion of multiplayer competition inspired by overseas tournaments.

Elegantly, Vincent’s waking hours are just as interesting- allowing for conversations which complement the phantasmagoric jaunts. Here, the protagonist can chat with bar patrons, drink (which affects his speed in the nightmare realm) or communication via phone or text message with their romantic pursuits. Dialog with the trio involves choosing from a list of varying responses, ranging from douchey detachment to genuine empathy, turning the title into a very elaborate (and fascinating) Rorschach test. As with best works of literature or film, Catherine obliges players to ponder over their own life decisions. 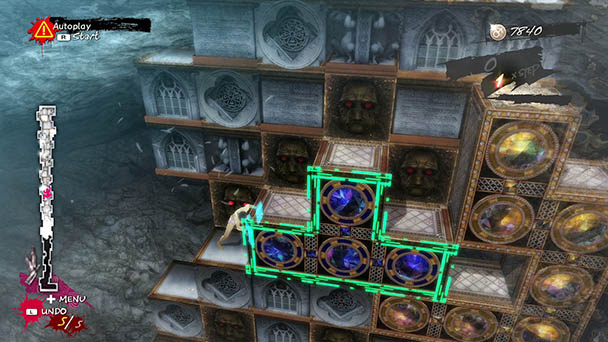 Periodically, players also participate in a poll, answering queries both pensive (“Does life begin or end at marriage?”)  and pervy (“Would you have sex with a ghost if it were attractive enough?”). Each survey response and conversational choices factor into the game’s karma meter, which gauges a player’s morality on a scale bounded by a red devil and blue cherub. While some are bound to be displeased with the explicitness of the system, it is instrumental in guiding gamers to one of the title’s thirteen endings.

Studio 4°C’s animated visual interpretation of Catherine‘s landscape is impeccable, with an evocatively drawn cast, while Full Body’s transition to the Persona engine provides a boost to fidelity. One of the biggest issues with the original release was the absence of the original Japanese voice acting. While the English dubbing was largely competent, lip synchronization issues were habitually noticeable, and phrasing sporadically sounded stilted. With the Switch release of Full Body, players can freely switch language options from the game’s configuration menu (although this wasn’t present in the current pre-release version). If you do opt for English, the localization team did an impressive job, with Troy Baker, Michelle Ruff, and Laura Bailey picking up right where they left off nearly a decade ago. 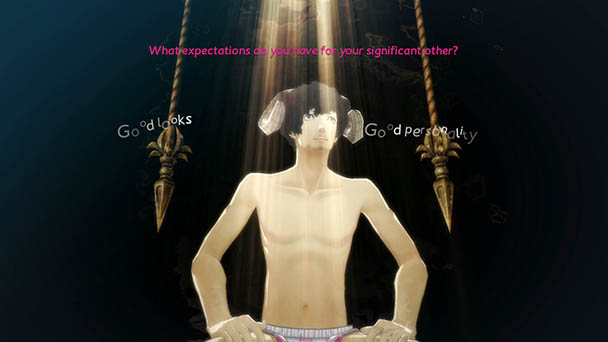 How Does the Switch Version Compare?
Sporadically, Switch owners are forced to make small sacrifices to enjoy portable ports. Fortunately, Catherine Full Body’s only compromises are found in the game’s cinematics. When the camera zooms on a character’s face to reveal emotion, players can expect the same visual fidelity found in the PlayStation 4 version. But when the game shifts to a long shot, the amount of detail decreases. Fortunately, it’s not too conspicuous, and if you focus on the story, you might not even notice what appears to be a drop in resolution. But otherwise, the game’s framerate remains solid during climbing sequences, both in docked and handheld mode.

One of the more interesting aspects of Full Body is the reinforcement of the game’s multiplayer component. Here, players can create a local match in the game’s Colosseum or compete in online ranked, casual, or friend-based rivalries. For those who prefer solo play, the title delivers with roughly twice the number of puzzles as the originally game. Rounding out the supplements like additional characters like Persona 5’s Joker as well as the Horn-Rimmed Glasses item. When these are equipped, every character appears in the underwear, which should make public play rather interesting. 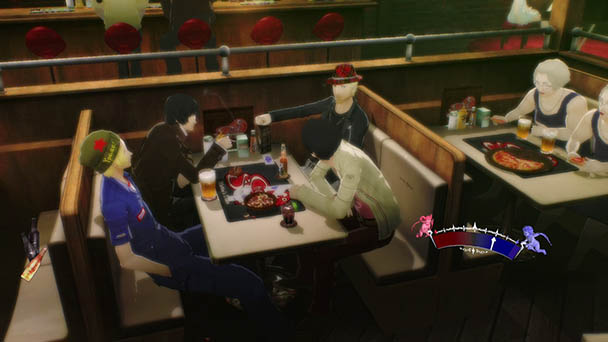 The overwhelming majority of our games hope to emulate the flash of a summer blockbuster, searing retinas with a brilliantly vapid succession of explosions. Conversely, Catherine: Full Body is more like the heady indie film, whose taut sequences are bookended by the type of dialog which encourages debate long after the credits have rolled. If you find that prospect even slightly intriguing, give Catherine (as well as Katherine and Rin) a chance to cultivate one of the most memorable and rewarding rapports in gaming.

Catherine: Full Body was played on Switch
with review code provided by the publisher.

Catherine Full Body (Switch) review
Catherine heads to the Switch with a proficient port that captures all the romantic tension, surreal puzzling, and competitive climbing of the PlayStation 4 iteration. Since the Vita version never got localized here, this marks the first time stateside players will be able to Vincent&rsquo;s tortured psyche in portable form. Despite obsessions with hyperbolic violence and titillation often rooted in a teenaged sensibility, there are signs of maturation in gaming. Faced&hellip;

Summary : Nine years on, Catherine’s mixing of storyline and structure-climbing remains engrossing. With the release of Full Body, the game receives a healthy amount of new content, pushing this eminent effort into greatness.