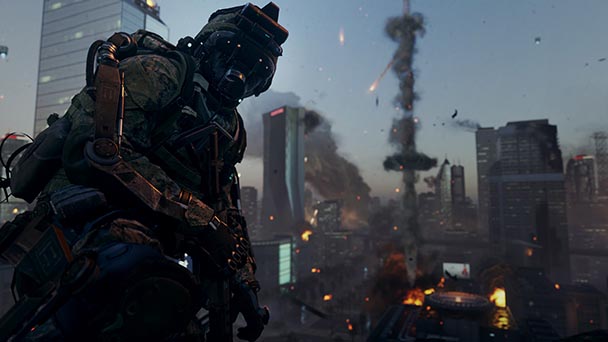 While Metal Gear Solid 4 once asserted that “war has changed”, Fallout 3 proclaimed that “war never changes”. The Call of Duty franchise has contently existed somewhere in the middle of those two contradictory tenets. Each annual iteration has typically extended just enough advancement to slow the specter of stagnancy, while fundamentally recycling the same basic formula for firefights. Woefully, last year’s Call of Duty: Ghosts was the first sequel to reveal regress. While the title gave players access to an entertaining, futuristic arsenal- it also pushed players through linear walkways, lined with pop-up enemies and was book-ended with cutscenes bogged down with tedious techno-babble. On next-gen systems, the game was marked by frame-rate problems, degraded resolutions, and a number of other porting problems.

For the release of Call of Duty: Advanced Warfare, development duties have passed from Infinity Ward to Sledgehammer Games, whose previous coding experience was limited to the design of COD: Modern Warfare 3’s engine. Given the studio’s abridged resume, the pressure to reinvigorate the series, as well as the burden of creating a truly next-gen Call of Duty, Sledgehammer could have easily faltered. For better or worse, the studio took the prototypical path, adding just enough attentive change to keep franchise fans happy. Of course, those expecting revolution or even substantial progression are poised to be a bit disappointed. 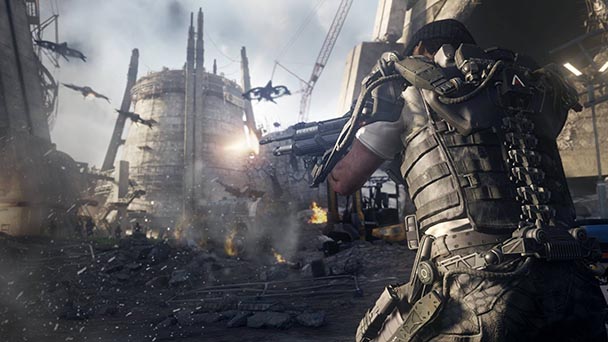 Advanced Warfare’s narrative follows the predictable path, commencing with a bit of human emotion before giving away to a spectacle of sequentially more explosive set pieces. Our chaperone through this futuristic milieu, filled with ability-enhancing exo suits and all types of exotic gadgetry, is Jack Mitchell- initially shown as a private in the United States Marine Corps. During a battle to push back North Koreans who have invaded Seoul, Mitchell loses his closest comrade and left arm- with the injury warranting a discharge from the military. During the funeral for his fallen friend, he’s approached by Atlas CEO Jonathan Irons, who offers Mitchell a prosthetic appendage, and the opportunity for retribution.

While the opening scenes have an undeniable, if hackneyed pathos, the drama quickly escalates into the type of conspiracy theory-driven geopolitical intrigue that has marked Call of Duty’s modern contexts. As such, expect the timeworn warnings about private military contractors running rampant as well as the conventional globe-trotting where players serve as a catalyst for capitalism-driven carnage. On the upside, Advanced Warfare’s facial animation proves a capable instrument for storytelling, with every wrinkle and facial tic articulated in near photo-realistic fashion. Although Hollywood talent doesn’t always offer a seamless transition into interactive entertainment, Kevin Spacey and Troy Baker give a skilled performance, with The Usual Suspects star delivering the type of delightfully ostentatious dialog that wouldn’t be out of place in a James Bond film. 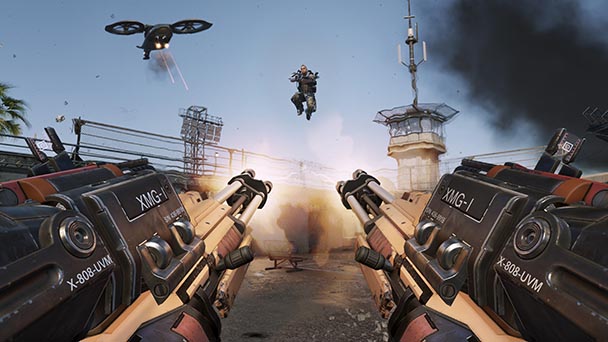 One of the enduring virtues of the Call of Duty series is the franchise’s reproduction of weapon handling. Although Advanced Warfare extends high-tech interpretations of contemporary rifles and sniper rifles, the title also delivers the type of directed energy or rapid fire shotguns that the subtitle implies. Expectedly, these future-firearms come with a range of sophisticated accessories, providing thermal scopes that peer through walls or a sonic pulse devices that inexplicably tweaks your perception time, allowing for bullet-time room clearing sequences.

Additionally, players are provided with secondary devices that offer a bit of flexibility. Grenades can be switched into EMP mode, potentially depowering any pesky drones or converted into smart explosives that can be steered into clusters of foes. There’s also a cloaking device and grappling hook which both bestow potent abilities to players. Unfortunately, the campaign largely determines when players can use these tools, which has long been an issue with the franchise. 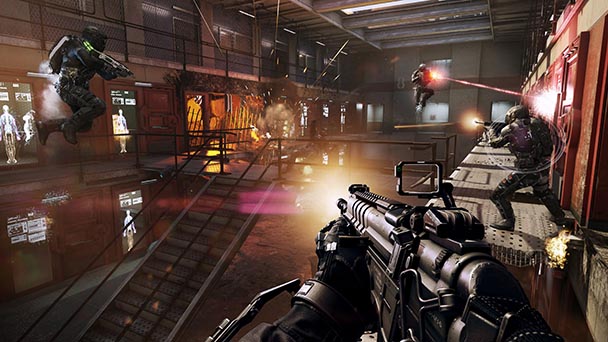 More autonomy is given to Advanced Warfare’s exo suit mechanics. Although each of the campaign’s fifteen level dictates which capabilities are conferred, multiple skills are usually available throughout the duration of each stage. Undoubtedly, the biggest change are the double jump and augmented landing abilities, which allow players to bound over objects or descend large distances without taking damage. There’s also the ability to perform a quick dodge, but pushing down the left analog stick while moving the stick in a direction feels unswervingly awkward.

While these implements are undeniably enjoyable, allowing players to rocket around level with wild abandon, the toolset feels neutered by Advanced Warfare linear battle paths and predictable artificial intelligence. Save for a section that either pays homage (or attempt to replicate) “All Ghillied Up”, firefights often feel like a Mature-rated take on the Buzz Lightyear’s AstroBlasters ride at Disneyland, as gamers follow a rigid footpath, blasting any interlopers that pop up along the way. Although next-generation sales pitches promised better AI, Advanced Warfare shows little improvement over predecessors, with enemies nonsensically running to take the place of their gun-downed companions. On the upside, there are fewer of the insta-death moments where players perish if they don’t do exactly what the game expects. 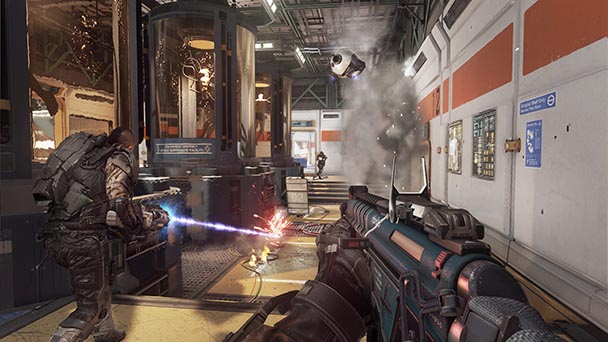 While Advanced Warfare’s multiplayer component supports matches without the exo supplements, the suit abilities certainly help to elevate skirmishes. In effect, the ability to quickly rocket up to vertical plateaus nullifies the dominance of sniper encampments, with opponents cutting across substantial distances before long-shooters can draw a bead on them. Inversely, it also emboldens shotguns, allowing a combatant to quickly get into an adversaries safety zone to unload a barrage of shells. To accommodate these changes, most of the title’s MP maps flaunt an increased area and are approximately twice the size of traditional maps.

Advanced Warfare’s multiplayer modes reflect COD’s tried and true approaches to competition, save for the addition of Uplink and Momentum. The former is an entertaining variant of Capture the Flag, tasking participants to throw or toss a ball-shaped satellite into a goalmouth. The latter is closer in spirit to a tug-of-war battle, with a team attempting to hold a series of several capture points. The game’s Pick 13 system builds upon Black Ops’ Pick 10 component, giving players a wide variety of way to customize their loadout. The flexibility allows veterans to use their slots to select high-tiered bonus, while those who struggle for kill streaks can increase the potential and size of their arsenal. One of the most pleasant surprises of Advanced Warfare’s multiplayer component is the variety and motifs of maps, which occasionally divert from the game’s single-player venues as well as the end of match supply drops- which bestow goodies like new weapons, clothing, and temporary perks, like a double XP boost 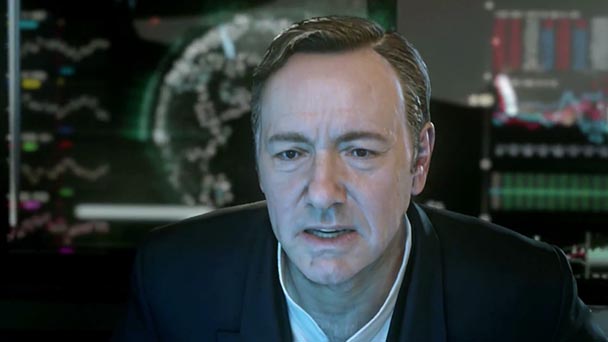 Rounding out the package is a mode called “Exo Survival,” which offers action for one to four participants. In execution, it recalls Modern Warfare 3’s Survival, where foes attack in waves, striving to kill the games’ party of offline or online players. Slaying enemies rewards combatants with credits which can be used to purchase new weapons, attachments, and upgrade your exo suit. While it’s functionally solid (and a bit too forgiving in difficulty with a full party), there are elements like malformed ragdoll animations which divulge a lack of playtesting.

After disappointing the fanbase with Ghosts, Activision needed a hit to rekindle its relationship with the Call of Duty Community. With exo suits that modify movement mechanics and an arsenal of high-tech weaponry, Call of Duty: Advanced Warfare executes the essentials. But the game’s staunch commitment to a linear campaign and a pleasurable, but risk-free multiplayer component might not be enough to protect the revered franchise from interlopers and eager upstarts. 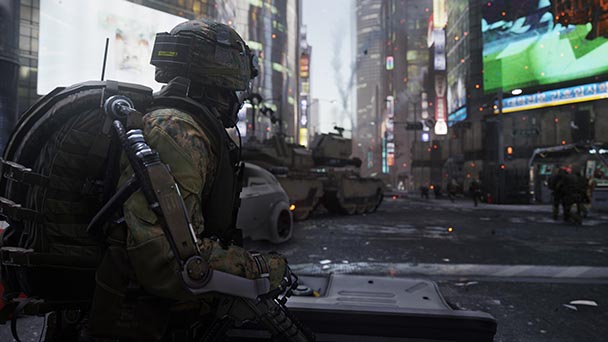 Call of Duty: Advanced Warfare was played on the Xbox One with review code provided by the publisher.

Summary : Like a grizzled veteran leading a nondescript training exercise, Sledgehammer Games’ offering can be a bit by the numbers. While the drill might seem routine, take solace in Advanced Warfare’s cutting-edge weaponry and lavish amount of next-gen polish.