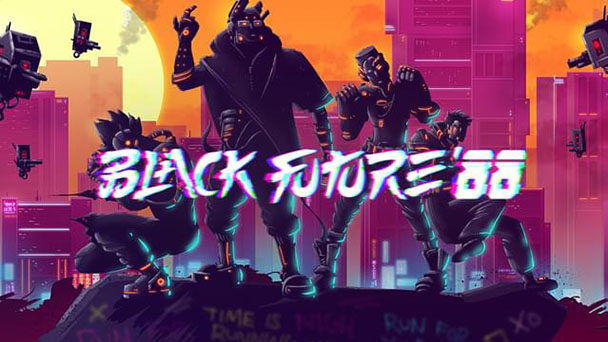 Time limits are quite common in games. But when Black Future ’88 provides you with a scant eighteen minutes to scale up its procedurally generated tower and exterminate its architect, you’ll undoubtedly feel an upwelling of urgency. You see, your heart is set to explode in about a thousand seconds, and there are a multitude of adversary-filled rooms to traverse as well as a succession of bosses standing between you and Duncan.

He’s the one who created the Skymelt skyscraper as a sentient defense system and doesn’t expect anyone to penetrate its formidably guarded floors. As such, every potentially squandered moment feels tense, especially when you’re pressured into a Faustian deal where you coerced into swapping seconds or health for a perk. 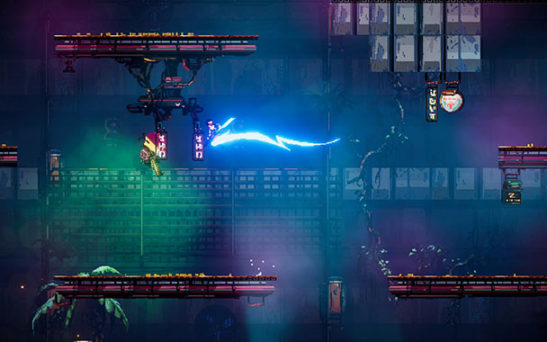 There’s barely any time catch your breath in Black Future ’88, and for many players, that will be a good thing. With the ability to double jump, dash, and use a growing arsenal of weapons, you’ve at least given a modicum of tools to make the near-impossible journey. But abilities and arsenals mean little for those without expertise. If you ever hope to confront Duncan, you’ll have to master every one of Black Future‘s techniques and familiarize yourself with the game’s 50+ weapons and inventory of upgrades and curses. Even then, it’s all too easy for a single mistake to snowball into humiliating defeat.

Eventually, you’ll have a roster of five characters. But when you start playing Black Future provides only two protagonists. Hauer is the everyman, armed with a pea-shooter of a pistol that’s never runs out of ammo. Tinker cyberpunk Seagrist has a larger ammo carrying capacity and wields a saber that’s proficient at hacking through bipedal foes. But use the sword and you’ll have to wait for openings between bursts of projectiles right out of a danmaku. Of course, cautiously taking cover under a platform will cost a few seconds, so there’s always the temptation to jump right into harm’s way before dashing to safety. 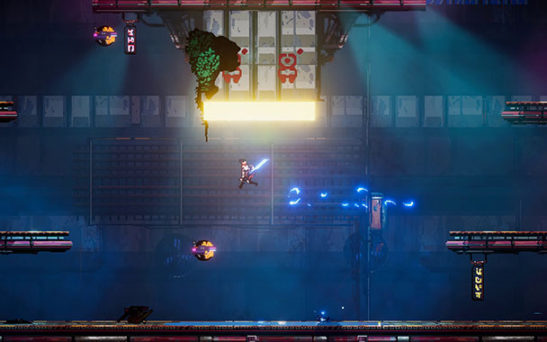 Gratifyingly, the other unlockable characters are more than just varying stat balances and starting loadouts. Each look and move distinctly. But more importantly, they have abilities that correlate with their backstory. Age affects how quickly time passes (or at least the perception of it), while one character has the potential to slow down time, each influencing how you approach your sprint toward dispatching Duncan. Typically, I discover my main rather quickly, but Black Future’s balancing will likely have you rotating through the entire roster. It’s a very ‘streaky’ game, and after a string of humiliating defeats against the first randomized boss, you might find yourself jiving with another character.

The same variability also applies to the game’s weapons. Initially, you might find yourself striving for proficiency with your character’s default weapons. 88 allows players to shoot either with a face button or by pointing the right analog stick in a direction. Fortunately, pinpoint accuracy isn’t required, with shots automatically homing in on opponents. That said, you will run into the sporadic obstacle, like portals that bend your bullet trajectories. 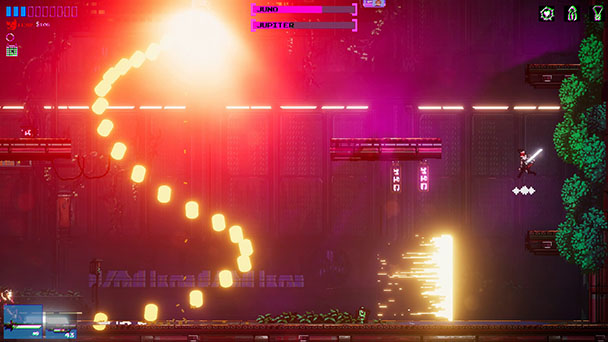 Sooner or later, you’ll forgo the comfort of your default firearm and pick up one of the weapons dropped by defeated foes. Pleasingly, guns and melee weapons behave distinctly. Not only do the number and speed of projectiles differ, but you’ll find some wonderfully quirky firearms, too. One weapon will teleport you to the position of defeated foes. Its use is disorienting at first, but when you realize enemies are more dumbfounded than you are, advantageousness is revealed. I especially like how Black Future ’88 intermittingly tosses balance right out the window. I defeated one boss in less than three seconds by using a beam gun. But imbalance works both ways, and if leave to much loot lying around, Skymelt senses your wastefulness and will send a mini-boss to hunt you down.

Roguelikes can frequently lose their random quality quickly, revealing their complete assortment of goodies. That’s not the case with Black Future, where new elements are provided at a leisurely rate. Each run contributes to the unlocking of new weapons, buff, and curses. While the first two are obvious, extending treats like rocket launchers and extended dashes, the latter is more idiosyncratic. Here, you’ll be offered an ability that comes at the cost of health or time. Reaching into the game’s rifts can occasionally force you into selecting from one of three curses. This is one area where the game reveals its sadistic side.  Chances are you’ll be enamored with its near-compulsory punishments. Yes, you can opt for an easier mode that provides all characters with slow-motion and relaxes the difficulty level. Developer SuperScarySnakes didn’t have to throw that in there, but its inclusion opens Black Future ’88 up to those beyond just the hardcore audience. 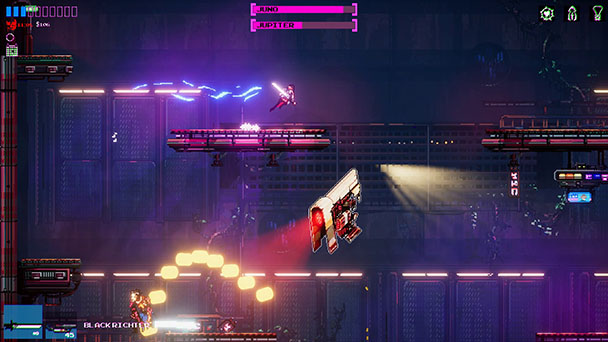 The game’s dystopian world is rendered though pixelated sprites, a style that becomes ubiquitous over the last half-decade. But Black Future’s incorporation of retina-searing hues on deep murky backgrounds endows the game with distinction. Not only do the glowing projectiles recall the luminosity of yesteryear’s coin-ops, but they help players make sense of the on-screen cacophony of adversity. Small references to cinematic treasures of the Eighties abound, like the flock of doves that scatter, John Woo-style when the door to the bosses’ lair in opened. Sonically, the thumping synth soundtrack solidifies the game’s concept, offering a selection of grooves ideal for maniac shooting. The synthesized voice that sounds like it’s reading alt-scripture is a particularly pleasing touch.

Roguelikes oversaturation almost seems like an inevitability, with an assortment of new ones released every week. But Black Future ’88 is one of the more distinctive efforts, thanks to the inclusion of creative weapons, perks, stims, and concessions. Responsive controls allow you to get out of almost all of the precarious situations cooked up by the procedurally-generated stages, making for a worthwhile undertaking. 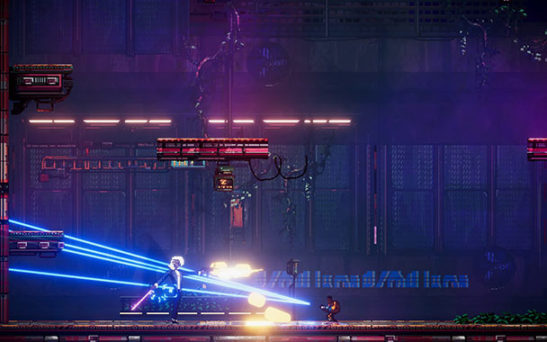 Black Future ’88 was played on PC with
review code provided by the publisher.

Black Future ’88 review
Time limits are quite common in games. But when Black Future &rsquo;88 provides you with a scant eighteen minutes to scale up its procedurally generated tower and exterminate its architect, you&rsquo;ll undoubtedly feel an upwelling of urgency. You see, your heart is set to explode in about a thousand seconds, and there are a multitude of adversary-filled rooms to traverse as well as a succession of bosses standing between you and Duncan. He&rsquo;s the one who created the Skymelt skyscraper as a sentient defense system and doesn&rsquo;t expect anyone to penetrate its formidably guarded floors. As such, every potentially squandered&hellip;

Summary : If you like intense action and making imperative decisions while scores on enemies pepper you with projectile, consider giving Black Future ’88 a go. Each run feels like a concentrated dose of running and gunning, with game challenging you to master its nuances.

Previous: The Princess, the Stray Cat, and Matters of the Heart 2 review
Next: Lost Ember review