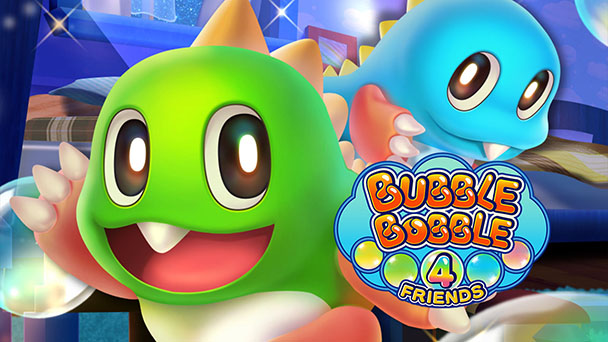 Bubble Dragons Bub and Bob are back with engaging sequel that won’t burst your bubble but won’t bowl you over with inspiration, either. 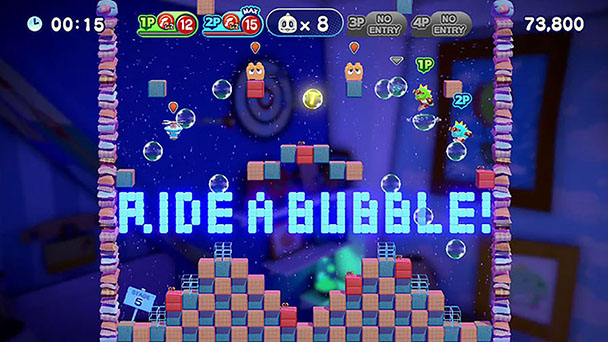 Few games have a legacy as enduring as Bubble Bobble. Originally released by Taito in 1986, the title quickly became a hit in arcades. Two years later, a competent NES port emerged, securing the game’s bubble-blowing, achingly cute dragons with a perpetual place in popular culture. Explore some of the alcoves of contemporary Akihabara, and you’ll discover Bub and Bob plushies in Super Potato, MacBook Airs adorned with stickers of the plucky pair, and if you’re lucky- an original arcade machine imbued with Seven Stars’ smoke.

But despite Bub and Bob’s enduring fame, Bubble Bobble has struggled to develop as a franchise. Although creator Fukio Mitsuji would go onto to create the equally enjoyable Rainbow Islands: The Story of Bubble Bobble 2, an inclination to peruse other genres (Syvalion, Volfied) and a tragic passing in 2008 put the series in less capable hands. At best, subsequent sequels like Bubble Bobble Plus!/ Bubble Bobble Neo! were innocuous retreads. But titles like Bubble Bobble Revolution and Bubble Bobble Evolution were disappointing enough to drag down the dragons’ reputation. The former was released with an infamous bug that prohibited advancement after the thirtieth stage, securing a place in the gaming hall of shame. 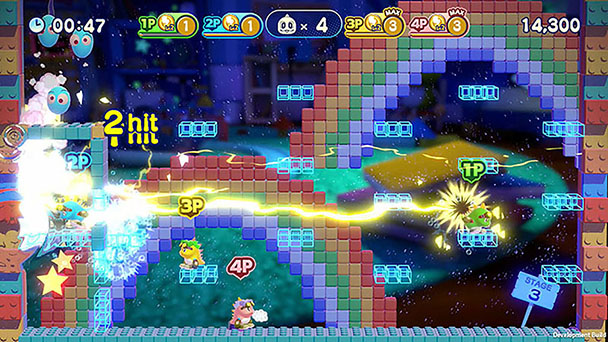 Although the PlayStation 4 release of Bubble Bobble 4 Friends might not revolutionize things, it also doesn’t mar the series’ trademark accessibility. Step into the game’s first succession of a hundred stages and you’ll encounter the same intuitive control scheme.  You’ll still move your adorable little dragon back and forth, traversing to higher platforms with a press of the jump button. While stages frequently emit bubbles, you can also launch your own, which are used to temporarily trap enemies until you can pop the delicate spheres.

Bursting these orbs still releases dividends that augment your score, with peaches, chocolate covered bananas, diamonds, and crown scattering around the screen. If you’re able to successfully eliminate several enemies, you’ll get more luxurious rewards, some of which swell to massive proportions. Who doesn’t love gorging on a grape-capped cupcake that is three times your height? Another collectable are balloons with the letters E-X-T-E-N-D. Not only do these provide extra lives, but also unlock new skills.

Changes that affect gameplay are subtle. In the original game, you could occasionally skim across the surface of a bubble without popping it. With Bubble Bobble 4 Friends you’ll frequently ride the globes to access different areas of the stage. Pressing down while falling activates a dragon stomp, making it easy to a pop a column of bubbles. Touching an enemy or anything launched from a boss will remove one of your lives.

Undoubtedly, the biggest addition is the addition of local multiplayer that supports up to a quartet of budding bubble blowers. Here, a pool of lives is communally shared, and if you aren’t able to rescue an injured ally, you’ll have to draw from the fund. As one of the endings of the original Bubble Bobble suggested, this is a game that should be played with a partner. But when a third or fourth companion joins, 4 Friends can get quite busy. Sure, the levels are larger thanks to the modern 16:9 ratio displays and the framerate never falters even when it’s filled with foes and bubbles. 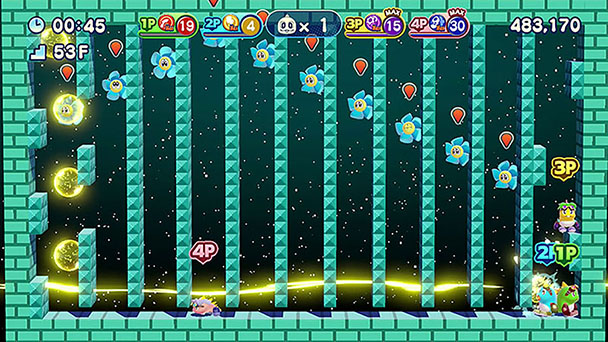 But occasionally, it can difficult keeping track of what’s going on, especially when playing with multiple local partners. Another of Baron Is Back’s additions is a backdrop that reveals which ways the bobbles will float. While it’s helpful for setting up creature-eliminating combo, it’s yet another element of visual distraction for a game that likes to fill the screen with sprites. As such, when playing with younger children, you might want to limit the number of simultaneous participants. It should be noted that 4 Friends is otherwise quite kid friendly. If you’re not able to pass a stage in three attempts, the game offers invulnerability, which is a compassionate inclusion.

But there a few issues that when coupled with the game’s premium price, might cause hesitation. Boss battles are one of the game’s sticking points. Although it’s easy to blow through a sequence of stages without losing a life, these showdowns require a different set of strategies, lest you’ll empty out your life reserves. These confrontations aren’t especially tough, but the likelihood for a single misstep is much higher. Another issue is that save for a few of the conclusion confrontations, some of the boss designs are uninteresting. 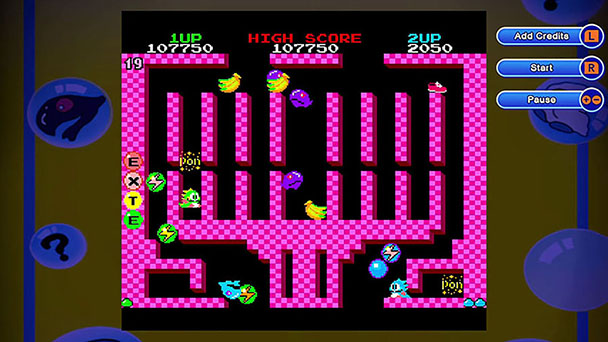 Complete the game’s fifty-level trek and you’ll be goaded into tackling it a second time, albeit with remixed stages. Hopefully, that trek has adequately prepared you for The Baron is Back, which was also added as a free addition to the previously released Switch iteration. Select the Arcade of Memories from a newly opened hard mode, and you’ll be tasked with climbing a 100-flour stronghold in a single run. Although you can have a team of four take on the tower, you’ll be limited to ten lives across the party. Woefully, there are no continues, but Baron Is Back let’s you at least practice on the level that bested you.  Also included is the original arcade version of Bubble Bobble, allowing for comparison. Contrast the two title and you’ll find that Bubble Bobble 4 Friends retains the enjoyment and for better or worse, stays true to formula.

Bubble Bobble 4 Friends: The Baron Is Back! review
Bubble Dragons Bub and Bob are back with engaging sequel that won&rsquo;t burst your bubble but won&rsquo;t bowl you over with inspiration, either.&nbsp; Few games have a legacy as enduring as&nbsp;Bubble Bobble. Originally released by Taito in 1986, the title quickly became a hit in arcades. Two years later, a competent NES port emerged, securing the game&rsquo;s bubble-blowing, achingly cute dragons with a perpetual place in popular culture. Explore&hellip;

Summary : Small details like Taito references in the backdrop demonstrate that the developers did their homework with Bubble Bobble 4 Friends: The Baron is Back. While the original release felt a bit threadbare with 50 stages (that were remixed), for a $40 price, the doubling of substance helps justify a purchase.