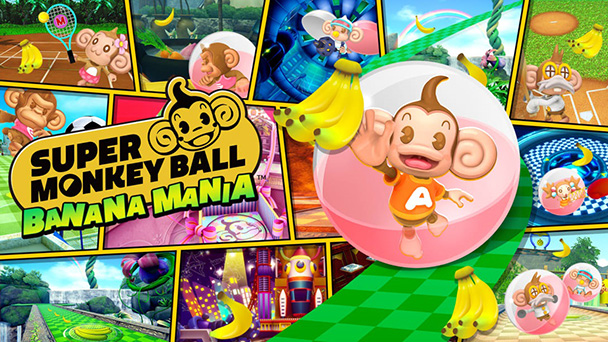 The latest entry in SEGA’s Super Money Ball franchise celebrates the series twentieth anniversary, offering a greatest hits-style retrospective of rolling action. While the game’s encyclopedic approach is welcome, this party just isn’t quite as festive as it could be. 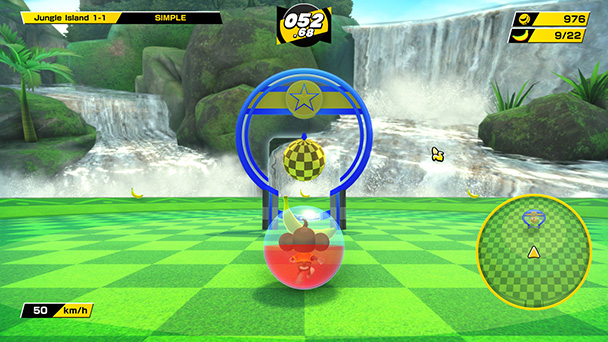 Some of history’s best game ideas can be easily summarized in a single sentence. ‘The Katamari grows larger, absorbing smaller objects that it runs over’ or ‘shoot all the Space Invaders before they descend on earth’, encapsulate two beloved classics. Summarily, SEGA’s Super Money Ball can be described just a succinctly- “it’s a steel ball in a wooden maze puzzle, played with simians in plastic capsules”. While most games put you in control of the lead character, Super Money Ball had you panning and tilting the entire playfield.

As a commemoration, the recent release of Super Monkey Ball: Banana Mania provides playable primates from across SEGA’s properties. There’s AiAi, MeeMee, Baby, GonGon return from the original 2001 Gamecube version of Super Monkey Ball, as well as YanYan and Doctor from the Wii version of Banana Blitz. As you earn in-game currency by playing, you’ll be able to unlock additional characters like Sonic and Tails, Jet Set Radio’s Beat and Kazuma Kiryu from the Yakuza series. Because it’s apparently mandatory that every game has to peddle downloadable content, you can pay real cash to play as Persona 5’s Morgana, Hello Kitty, and even Suezo, the one-eyed creature from Monster Rancher. 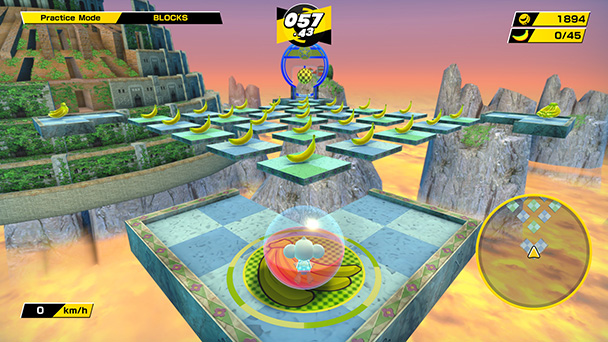 As cute as tiny monkeys in gacha containers are, it’s the stages that are the real star of the game. Super Monkey Ball: Banana Mania’s levels are harvested from the first two Super Money Ball games, as well as an assortment of stages from Super Monkey Ball Deluxe. Each of these push the game is different directions. Some are like puzzles, with a specific route that’s essential for success. Occasionally, you can even cheat, falling from one part of the stage and landing near the exit.

Other feel like racers, pushing the tiny primates down rollercoaster-like halfpipes. Gain too much speed, and your hapless monkey will fly right out of the tube and fall into the great monkey void. Other levels can feel like a skateboarding game, expecting proficiency of a certain technique. Stage order is curated quite carefully, with stages gradually increasing in difficulty and imparting different Monkey Ball handling skills. Although you can head right for the exit, some appreciate the challenge of grabbing every banana that’s scattered around the stage. 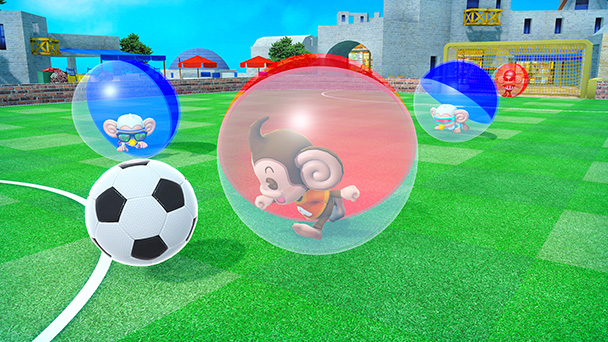 A Bit of Help?

About halfway through the game’s compilation of 300 stages, the challenge becomes lofty. You’ll probably grow elated if you complete the level on the first try. But Banana Mania veers from its arcade roots, providing an endless number of chances to complete the stage instead of assigning a preset number of lives. Pleasingly, if you’re stuck, you can also use some of the earned currency to skip a level.

Alternatively, you can use the game’s Helper functionality to gain an oft-needed advantage. From displaying the suitable path to the exit, doubling the time length for a level, or extending slow-motion, the assists are mercifully. You can manually turn on Helper from the game’s pause menu and if you fail a single stage numerous times, Banana Mania will automatically offer support.  Naturally, you’ll forgo earning a spot on the game’s online leaderboards. 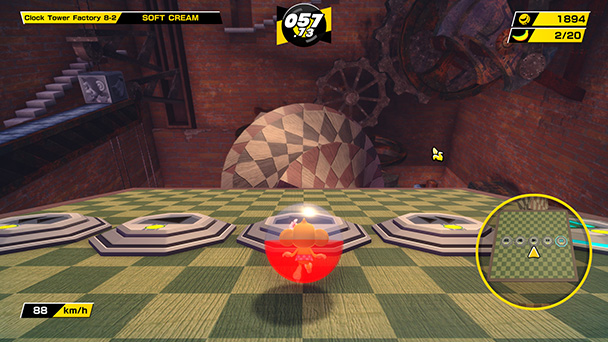 As I made my way through Banana Mania, I started failing some of the stages that I remembered acing on the Gamecube. I thought years of RPGs has dulled my reflexes, so I reconnected my old handled, lavender-colored console to assess the damage that time has done. What I found is that Banana Mania’s controls aren’t an absolute restoration of the original games. There’s no perceptible difference in the amount of precision or even responsiveness, but its feels just different enough to mess with muscle memory.

Perhaps, this is a consequence of Banana Mania being a remake. Of course, the difference might also be attributed to the use of a different controller. But one alteration that is undisputable is the game’s simplification of story cutscenes. While narrative has rarely been a crucial part of the Monkey Ball formula, here the static images lack the charm of the original game. 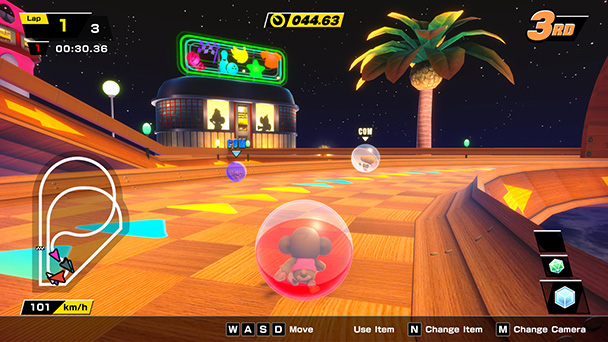 Like any entry in the franchise, the game main campaign is only one slice of the banana. The traditional party games return offering a dozen different mini games that can accommodate up to four local players. Some of these recreations build on existing concepts, such as Monkey Racing’s speed rolling competitions. The main difference is you have direction control over your character, making it feel like a kart racer played with hamster balls.

Expectedly, there’s a range is quality. While Monkey Billiards, Bowling, and Golf offer a respectable adaptation of the nine-ball, ten-pin, and miniature golf, other mini games aren’t as successful. Monkey Target mixes a ramp roll with paraglider-style sailing, but the controls will be too finicky for casual group play. Meanwhile, Monkey Soccer feels neither like its source material or even foosball. The fundamentals of both offense and defense feel underdeveloped, so this won’t hold attentions for long. 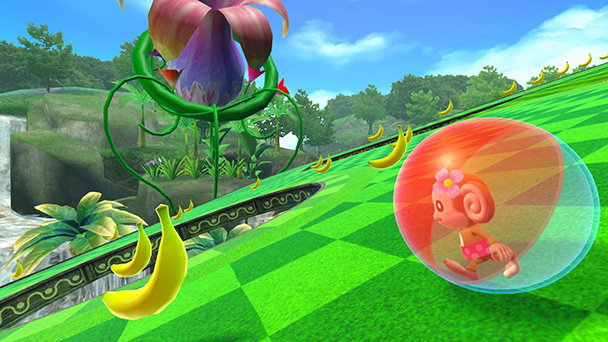 Super Monkey Ball is one of SEGA’s classic properties and indisputably deserves admiration and a revitalization that harnesses the capability of modern hardware. Banana Mania captures most of the brilliance of the original games, but occasionally soils the celebratory vibe by locking things behind the paywall. Think of this as the franchise’s greatest hits, albeit handled by a component cover band.

Super Monkey Ball: Banana Mania was played on
PC with review code provided by the publisher.

Super Monkey Ball: Banana Mania review
The latest entry in SEGA&rsquo;s Super Money Ball franchise celebrates the series twentieth anniversary, offering a greatest hits-style retrospective of rolling action. While the game&rsquo;s encyclopedic approach is welcome, this party just isn&rsquo;t quite as festive as it could be. Some of history&rsquo;s best game ideas can be easily summarized in a single sentence. &lsquo;The Katamari grows larger,&hellip;

Summary : Super Monkey Ball: Banana Mania is a remake that captures 98% of the experience from the original games. Newcomers won’t notice the 2% difference, but if you grew up with AiAi and the gang, prepare for brief moments of dissonance.