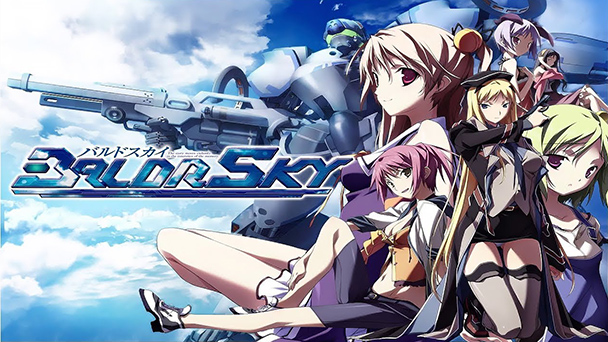 The Pathos of a Mecha Pilot

Most mecha games only do a serviceable job of conveying what it’s like to pilot a hulking robot. Sure, the expensive hardware setups of Virtual On: Cyber Troopers and Steel Battalion have helped convey the complexity of controlling a hulking machine. But most mecha titles are fixated on the power of missile launchers and plasma swords, neglecting the sentiments faced by their pilots. Anime like Neon Genesis Evangelion, Mobile Suit Gundam, and Ghost in the Shell were successful for getting into the heads of their protagonists, raising the stakes of every confrontation.

By merging visual novel storytelling with real-time mech battles, the recent release of Baldr Sky bests most of its peers. Rich exposition allows players to understand what it’s like to step into a towering machine capable of mass destruction, as well as the dealing with brutality often associated with battle. The game’s plotline habitually moves at a breakneck pace while brimming with philosophical insights into artificial intelligence and the blurring between virtual and real worlds, allowing for an indispensable departure from genre power-fantasy. 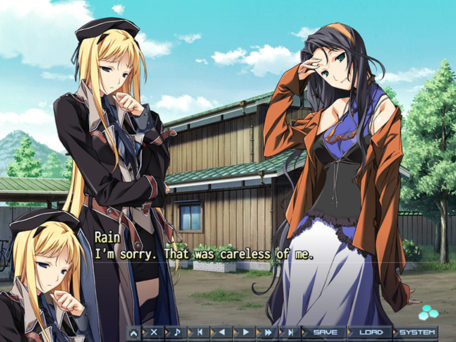 Baldr Sky: “Lost Memory” Dive1 was released in Japan in March 2009, with 40-50 hours of story and play that culminated with a cliffhanger. In November, Baldr Sky “Recordare” Dive2 was published, adding a comparable amount of playtime, but with a conclusion that answered consuming questions and delivered a sense of closure. For Sekai Project’s Western release, players won’t have to endure a seven-month gap between the two games, with Baldr Sky bundling the two novels.

However, the stateside shift isn’t without a few caveats. Apparently, developer GIGA requested that the release remove the game’s 18+ content. While any kind of editing is a concern to fans, the quantity here is particularly worrisome. Effectively, all sex scene are removed, resulting in the removal of about 4% of the game’s dialog. But rescue is rooted in the emergence of a suspiciously-times fan patch that reinstates the censored content. (It was available here for a short time, until DCMA claims emerged. But at least it’s out there). Since playing the Steam version of Baldr Sky is afflicted by blank screens, light rays, and other disruptive elements, Shadowwolf’s efforts are appreciated. 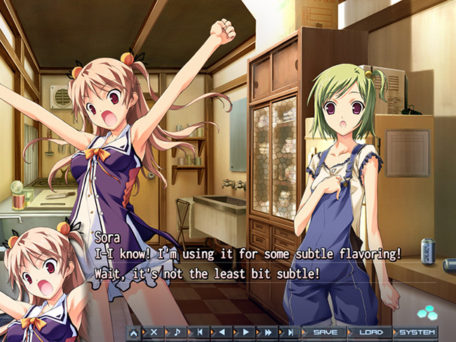 Of course, Baldr Sky’s decade-long journey West brings a few issues of its own. As such, players should expect upscaled resolutions based on the game’s native 800×600, 4:3 output. But that aside, the title offers a number of dated, but eye-pleasing details, with some of the most intricate options menus around, flaunting features like four different animated cursors, font and message speed customization, and the assignment of a panic button when others might interrupt your play session unannounced. Given Baldr Sky’s abundance of battle scenes, a controller is a near-prerequisite. Nicely, the game recognized DualShock 4s, Xbox One and 360 controllers automatically.

Delve into Baldr Sky’s narrative and you’ll discover a storyline that intermittently incorporates trope and flirts with predictability, yet ultimately circumvents both issues. Delve into the game and you’ll discover lead Kou Kadokura regaining consciousness on the battlefield. A brain injury has seemingly wiped most of his memories, but fortunately a subordinate named Rain Kirishima, is able to assist him, as the pair evade a swarm of enemies descending on their position. Although amnesia is a well-worn narrative device, it’s use proves forgivable. Here, the Kou expresses the surprise of being inside a mechanized body that intensifies the power behind every movement. It’s a description that helps sell the feeling of what it’s like to being inside one of the game’s powerful, gun-toting mechs. Later, we view the plot’s twists through Kou’s perspective, which allows for Sky to mine some emotionally turbulent territories. 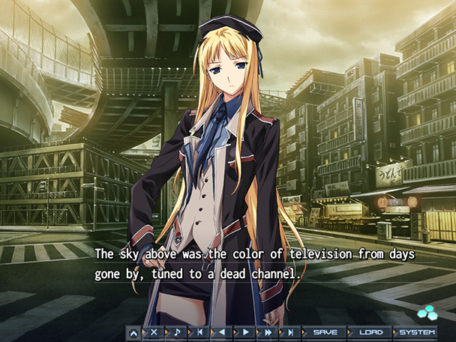 The notion that you’re inside a metalized mech is one of the game’s first misdirections. It’s quickly reveled that these are called simulacrum and exist in a virtual world accessed by people with nanochips implanted in their heads. Gradually, Kou learns he’s part of a mercenary group for a hunting down a faction responsible for a catastrophic event referred to as “Grey Christmas”. While some of the plot reveals are evident long before there are actually articulated, this hardly impairs a sense of gratification. Instead, learning about a byzantine, Gibson-esque world where technology, drugs, religion, and false consciousnesses intermingle makes Baldr Sky a must for fans of metaphysical sci-fi.

A Sextet of Routes

The sequencing of Baldr Sky is prearranged, each path helping to construct the game’s world and metanarrative. Initially, you’ll follow Rain’s route, which helps establish the game’s context, where tensions between pro and anti-AI factions are ever-increasing. It’s here that the game’s antagonists are introduced while motivation are laid out. Pleasingly, additional routes branch off early in the game’s events, providing players with a wealth of new perspectives and insights for each additional playthrough. With a majority of the world building accomplished Nanoha and Chinatsu’s routes provide new perspectives, respectively exploring the causes of Grey Christmas and providing a pleasing amount of action. 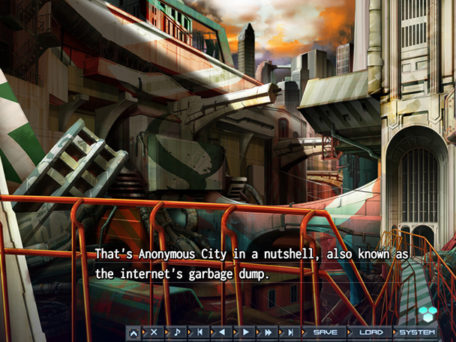 The second half of Sky offers also offers a trio of routes, and preserves the game’s predisposition for good, normal, and bad endings. While these can be based on player decisions, they also hinge on battle performance. Blow it in a decisive showdown and you can expect not to witness one of the game’s more upbeat conclusions, making save management a requirement. Unsurprisingly, some of the end endings are tragic, but by the time you get there, you’re probably prepared for the emotional impact.

What separates Baldr Sky from most visual novels in the sophistication and refinement of its action sequences.  Here, you’ll move freely across two-dimensional battle fields, with buttons releasing different melee and ranged attacks that are delimited by a heat gauge. Players are encircled with a ring that displays vital info like the enemy counts but also shows the radius of your melee attacks. If a foe is attacked outside of this ring, you’ll summon ranged attacks, while those within are subject to swings. Pleasingly, combat offers some subtle nuances, like prioritizing dash attacks, giving battles a bit of depth. Gradually, you’ll absorb small details about success in combat, like how ineffective ranged attacks are on all but the game’s easiest difficulty level. 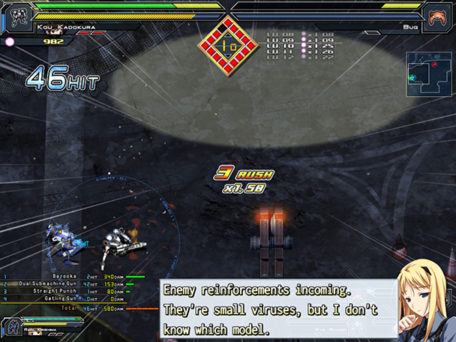 Gratifyingly, defeating rival pilots and AI drones rewards experience, which gradually augments your abilities. Another upside is the variability of weapons, with players able to equip over a hundred different arms. But undoubtedly, the game’s most remarkable component are plug-ins, that can be slotted in and adjust Sky’s gameplay or aesthetics. Naturally, progress carries over to the new Game+ option. Truly, the only missing option is skipping battles completely across replays. But that isn’t an option since there’s exposition during your encounters.

Given the length of the Baldr Sky duology, Sekai Project localization is rather extraordinary. Not only did the dialog receive a proficient translation, but the adaption to the game’s substantial user interface is so proficient, Sky seems like it was an originally released in English. In its expurgated form, the game is worth a go, due to its accomplished blending of plot and play. But the presence of a fan-made match restores the sexiness and the sense of continuity, making one of the last visual releases of the decade also one of the best. 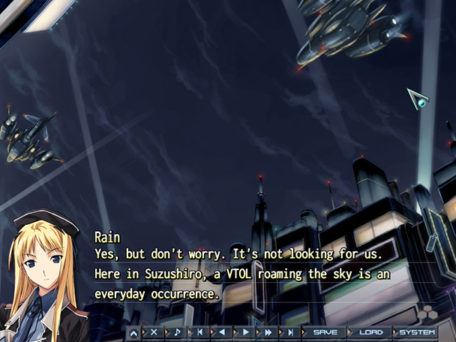 Baldr Sky was played on PC with review code provided by the publisher.

Baldr Sky
Platform: PC
Developer: GIGA
Publisher: Sekai Project
Release date: December 20th, 2019
Price: $49.99 via Steam
Language(s): Japanese voice, English Text
Baldr Sky review
The Pathos of a Mecha Pilot Most mecha games only do a serviceable job of conveying what it&rsquo;s like to pilot a hulking robot. Sure, the expensive hardware setups of Virtual On: Cyber Troopers and Steel Battalion have helped convey the complexity of controlling a hulking machine. But most mecha titles are fixated on the power of missile launchers and plasma swords, neglecting the sentiments faced by their pilots. Anime like Neon Genesis Evangelion, Mobile Suit Gundam, and Ghost in the Shell were successful for getting into the heads of their protagonists, raising the stakes of every confrontation. By merging&hellip;