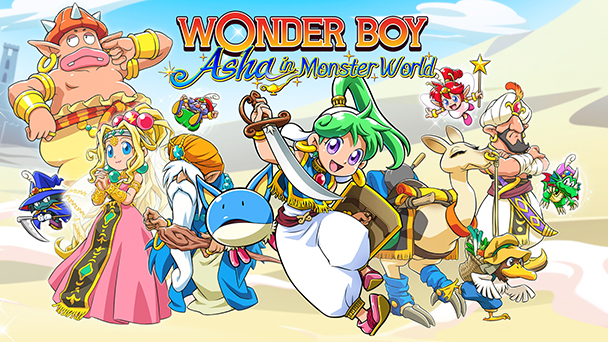 While Asha has been given a lavish aesthetic overhaul, underneath it all, all of the platforming and enemy hacking reveals few signs of aging twenty-seven years on. 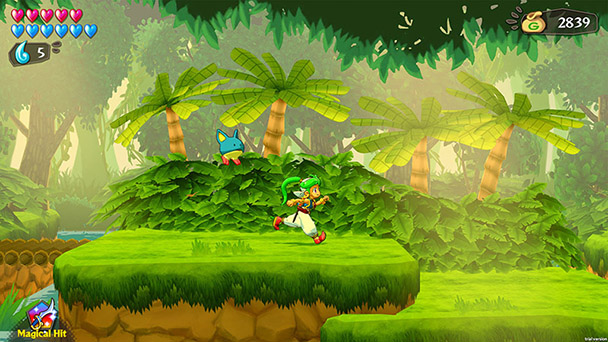 It’s difficult to not reminisce about the eight- and sixteen-bit eras with a bit of rose-tinged retrospection. Long before glum protagonists were all the rage, the stars of console games were persistently plucky heroes. They overcame adversity with dutiful training and an outlook of unflinching optimism. But much like the enduring Star Wars saga, leads began to resent their calling. Sure, the shift in mindset made them more human, but they also became a lot less fun.

Recognizing the campy gratification of Lucas’ original trilogy, Wonder Boy: Asha In Monster World opens with a sharply pitched text crawl. Echoing Luke Skywalkers’ abilities, lead character Asha is able to hear pleas sent from beyond the physical world. After hearing the Elemental Spirits warn of the emergence of monsters, she sets out to put an end to the malevolence, seizing her destiny as a courageous warrior and saving the four spirits. Agreeably, she never second-guesses her purpose. 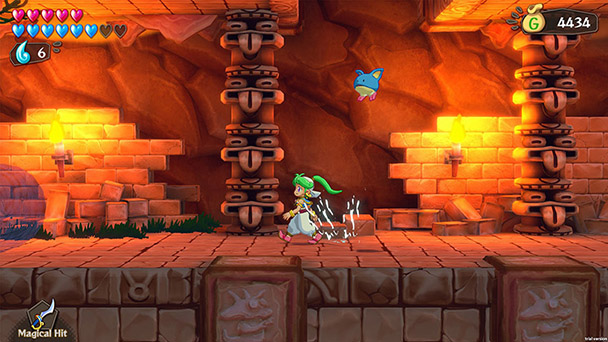 A Shimmy That Probably Inspired Shantae…

As a remake of 1994’s Monster World IV, the Switch, PlayStation 4, and PC title takes few unjustified deviations. Naturally, the beautiful pixel art of the original Mega Drive version has been updated. Wonder Boy: Asha In Monster World employs a cell-shaded polygonal style that recalls the look of Dragon Quest XI. There’s remixed music, of course. Many of the same songs are performed with more organic instrumentation. But mostly importantly, Asha is given a voice. Although she mainly speaks in short utterances, her tone corroborates her audaciousness.

With original developer Ryuichi Nishizawa at the helm, it’s not surprising that the game doesn’t tamper too much with tradition. As the sequel to Wonder Boy in Monster World, Monster World IV dialed back some of the explorational elements of the previous outing. What you’ll find in a largely linear trek with sporadic branches that lets Asha walk into houses or explore a background layer. The team at Artdink preserved the level layout which means some long stretches through homogenous-looking structures, which does feel a bit antiquated today. 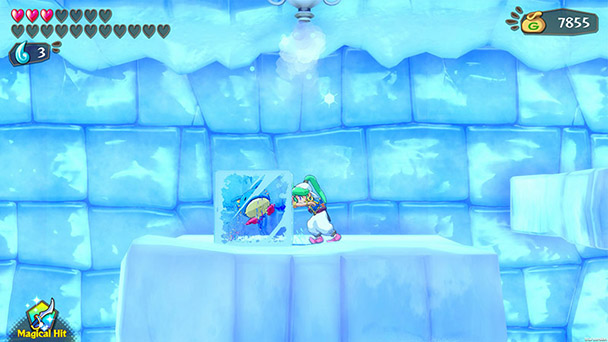 …And a Move Borrowed from Scrooge McDuck

Asha is still armed with a sword and shield. The former can be hoisted skyward to jump-skewer foes. When pointed downward it operates like Scrooge McDuck’s cane in DuckTales, permitting Asha to pogo over enemies. Push downward while standing will cause Asha to extra her shield, which is useful for avoiding damage against incoming projectiles. But the shield’s most value trait is what is called ‘Magical Protection”. Jump onto some enemies (and even a few bosses) and Asha will perform a summersault that prohibits her from losing one of her health hearts.

Asha’s Pepelogoo companion is also invaluable. This azure-colored acquaintance allows everything from the ability to double-jump, glide, extinguish flames, and even melt ice. Single-player platformers can occasionally feel a bit lonesome, but your cooperative buddy helps reduce that sentiment and never objects to being tossed around. 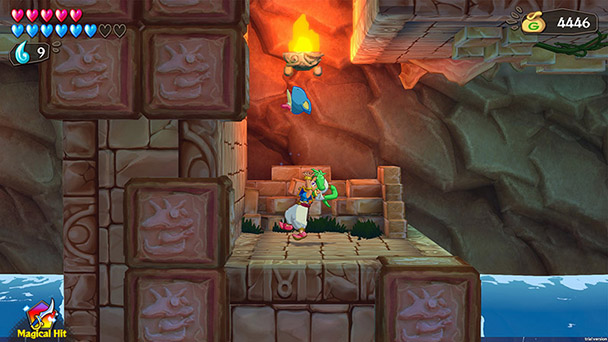 The biggest change to your arsenal is the Magical Hit move, which gradually fills as you attack adversaries. Let the gauge fill, and it will gleam with a gamut of colors, gives access to an attack that dishes out additional damage. But it’s hardly necessary. Asha In Monster World’s Easy setting provides additional heart-shaped hit points at the start of the game, which the remake scatters 50 additional Life Drops across its stages. Collecting ten of these adds an additional hit point. Now, the game lets you know just how many Life Drops you overlooked in each zone, and lets you revisit areas to hunt for them. Collectively, these make the remake a substantially easier and less frustrating experience.

While the challenge level is subdued, that doesn’t mean you won’t encounter a few frustrations. The game’s localization is quite spotty. Not only are there numerous typos but the translation is excessively stiff and can be too wordy. What’s more, a few bugs slipped by the QA team. Although none of them are game breakers (and confined to branching level paths), their presence is surprising given the general quality of this remake. Lastly, the original Monster World IV is packed in with the physical iteration. While incentivizing this version is understandable, the publisher should at least make it purchasable to those who opt for a digital purchase. Luckily, it can be found on the SEGA Genesis Mini as well as in the Sega Vintage Collection: Monster World compilation if you’re seeking the English translation. 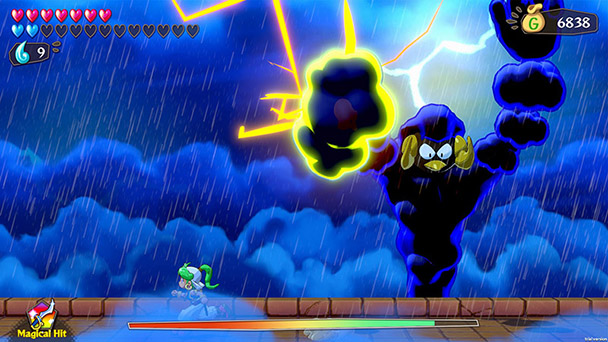 With the releases of Wonder Boy Returns, Wonder Boy: The Dragon’s Trap, Monster Boy and The Cursed Kingdom and now this remake of Monster World IV, the quantity of revitalizations are catching up with the number of original games. Undoubtedly, this speaks about the quality of Westone’s eight- and sixteen-bit action platformers. The fundamentals of these games remain engrossing over a quarter-century later. Just as importantly, the era reminded us of the potency of an unshakable protagonist.

Wonder Boy: Asha In Monster World was played on
PlayStation 5 with review code provided by the publisher.

Wonder Boy: Asha In Monster World review
While Asha has been given a lavish aesthetic overhaul, underneath it all, all of the platforming and enemy hacking reveals few signs of aging twenty-seven years on. It&rsquo;s difficult to not reminisce about the eight- and sixteen-bit eras with a bit of rose-tinged retrospection. Long before glum protagonists were all the rage, the&hellip;