As Far as The Eye review 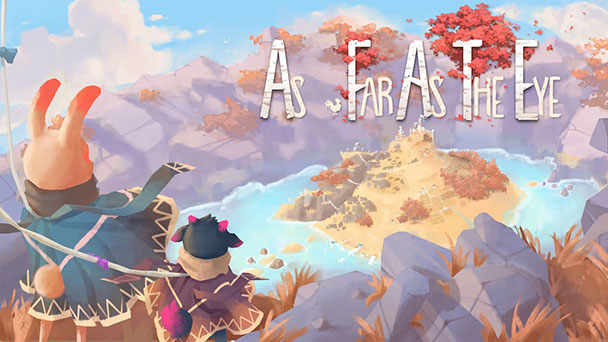 With two inelegant tutorials and play that seems soothing but can be surprisingly strenuous, As Far as The Eye often dares you to like it. There are several strong reasons tolerant players might.

The “eye” in As Far as The Eye isn’t a visual organ, or even a metaphor for sight. It’s the sole sanctuary in a world threatened by flooding. Instead of employing conventional expositional techniques like characters and conflict, the game uses lingo for its worldbuilding.

As such, As Far as The Eye extends a rather unapproachable first impression, presenting players with maps referred to as “halts”, precursors to flooding that are called, “vagaries”, and character units known as “pupils”. Even more confounding, the latter adopt the forms of animals while working. I’m all for animism, but I don’t immediately think of bears as wood gatherers or axolotls having a partiality for stone mining.

Campaign is Actually a Progression of Lessons

You can start As Far as The Eye two different ways. The game’s campaign functions as a five-chapter tutorial that attempts to impart the fundamentals. A dubiously named “Quick Game” mode presents a procedurally-generated journey toward the Eye, revealing a more roguelike approach to its turn-based mechanics.  Here, you’ll initially select from one of the game’s starting tribes, who each have their own starting position, resources, and a distinctive balance of positive and negative traits.

What the developers won’t tell you in that both modes have their own teaching methods. I initially tackled the game’s campaign which made for an uneasy onboarding. Not only does the game offer little explanation of its jargon, but guidance was sporadically abstract. Yes, you’ll need to gather resources to overcome obstacles on the overworld map, but motivations and mechanics aren’t always explained.

Tutorials don’t provide detailed button prompts, so newcomers might be perplexed why some menu selections can only be accomplished with directional buttons and not the analog stick. The game demonstrates that overlooking these kinds of details can make the learning process needlessly strenuous. This is a game that will test your patience. At first, I felt like I was fighting the user interface.

Then there’s the far biggest grievance- you can easily fail the campaign. Lacking combat, As Far as The Eye wants to position itself as a temperate game. But make no mistake, starvation will kill you just as quickly as the fiercest foe of most strategy games. Sadly, the title doesn’t record your mid-chapter progress, which is yet another standoffish design decision. Most developers bend over backwards to obtain a player’s interest. But Montpelier-based Unexpected is far more aloof.

The Difficulties of Being a Wind Deity

The masochist is me was enthralled by the studio’s standoffish approach.  And I’m sort of glad I stuck it out. Eventually, As Far as The Eye’s hex-based “halts” charmed me with their blend of short- and long-term managerial decisions. On a micro level, you’ll survey each stage, searching for reserves of food, animals, wood, and stone. Naturally, all but food requires a structure to process each resource.

On a more macro level, you’ll have to determine whether to build cheaper, permanent constructions that you’ll leave behind or more expensive mobile ones that you’ll take with you. Unlike many of As Far as The Eye’s contemporaries, where you’ll feel a bond to the settlement that you’re built up, you’re always wandering and can’t always rely on material progress. Yes, even the number of resources that you can carry over into the next halt is restrained.

And that perspective is where the game excels. As Far as The Eye doesn’t center on possession or exploitation of the land, but taking just enough resources for survival before moving on. Remarkably, the great flood and its harbingers aren’t just the typical catastrophic events used to create a sense of tension. Instead, they are portrayed as part of the renewal process. The notion of symbiotic relationships between life and nature isn’t a commonplace theme in games. As such, the perspective feels particularly relevant.

Starving for A Creative Take on Strategy?

At the Campaign demonstrates, survival isn’t easy in Eye. The need for nourishment is unremitting and occasionally exacerbated by a diminishing efficiency or a random trait that makes certain pupils consume more food. Supply chains require at least a trio to make efficient rations, which swallows up the majority of your raw labor. But like Frostpunk, it’s all part of the game’s worldview, intended to express the hardship of nomadic life.

Fortunately, it’s not without benefit. As Far as The Eye reminds up that technological progress emerges when you’re forced to be resourceful. As your pupils gain experience by performing a trade, they’ll passively gain new skills. There are even additional skill incentives for establishing specialized structures for Pupils to work at. The component is effective since it contains just the right amount of micro-managing. Had things grown too complex, it might have taken away from the larger task at hand.

A Middling Port, As Far as I can See

As a Switch port, As Far as The Eye is merely competent. As with most of these text-heavy adaptations, font size is non-adjustable and perpetually feels too small. While touchscreen support seems like the most obvious substitute for the mouse-and-keyboard control of the PC version, its not offered. Perhaps the tiny tabs and icons that dot the border of the game’s main screen are too small for most fingers. As such, you’ll have to use minus key in combination with the directional button on your Joy-Con to access menus, which doesn’t feel natural or responsive.

On the upside, the game does have an eye-grabbing art style. Maps employ autumn colors, with orange, khaki, or purple hex spaces adorned with vibrant foliage or turquoise ponds. Your shapeshifting pupils are drawn with a bit of cartoonishness. Given the charm and randomly-assigned names, they seem less like generic game units and more like a pet your need to safeguard.

As Far as The Eye is for players prepared to invest a few arduous hours learning its nuances. Take your pick, there are two aloof roads in. But  persist, and you’ll eventually gain your bearings. What follows is a wholly original experience, that manages to engage without being dependent on warfare. But ultimately, it’s the game’s depiction of the vulnerabilities of nomadic life that might stick with you after the resource management has grown tedious.

As Far as The Eye was played on Switch with
review code provided by the publisher.

As Far as The Eye review
With two inelegant tutorials and play that seems soothing but can be surprisingly strenuous, As Far as The Eye often dares you to like it. There are several strong reasons tolerant players might. The &ldquo;eye&rdquo; in As Far as The Eye isn&rsquo;t a visual organ, or even a metaphor for sight. It&rsquo;s the sole sanctuary in a world threatened by flooding. Instead of employing conventional expositional&hellip;

Summary : There's a lofty barrier to entry before the enjoyment of As Far as the Eye becomes visible. This is intensified by a Switch port that neglects touchscreen support.