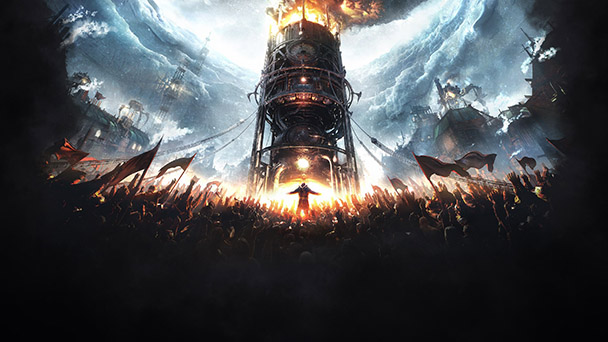 Far removed from the idealistic municipalities of Sim City, Frostpunk: Complete Collection will put you through the ringer, facing a succession of tough ethical decisions. But living with your choices might be the real challenge. 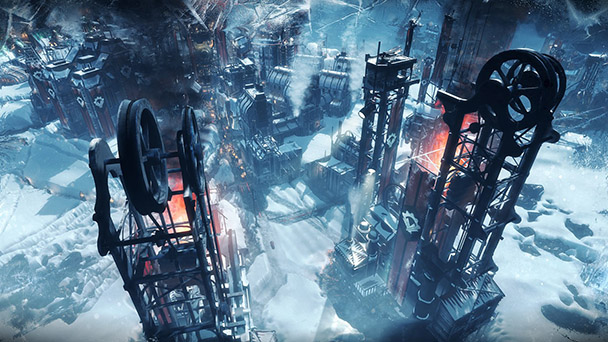 When Frontpunk was originally released in 2018, it made quite an impact. Up to this point, most city builder games were cheerful affairs. Typically, you were given a meager village and by assigning members of the populace to various tasks, a utopian society would eventually emerge. Sure, there were managerial challenges and the occasional setback to keep things interesting. But there was almost always a solution that could turn misfortune around.

Frontpunk threw most of that formula in the trash. It’s setting imagined an alternative history, where an ice age plunged a late nineteenth century world into a merciless dystopia. After millions had already perished, a small group took refuge around a derelict generator. Survival was aggressively daunting as you ordered workers to plow their way through deep snow, in order to bring back enough materials to endure in sub-zero temperatures. Illness and misery were ubiquitous. But you persisted, knowing that the remnants of human civilization hung in the balance. 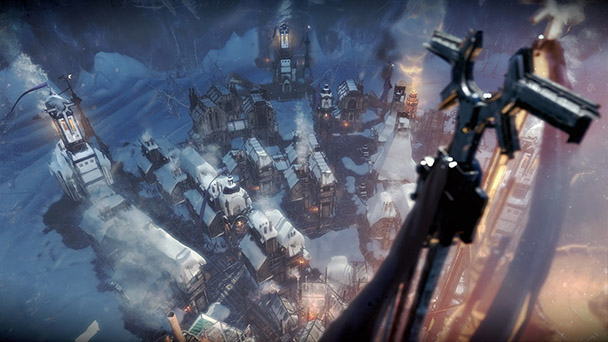 More Mercilessness for Your Money with the Complete Collection

The PlayStation 4 and Xbox One releases of Frostpunk – Complete Collection lets you revisit this hard-hearted blend of city management and survival simulation. And honestly, after witnessing many of the political decisions of the pandemic, where public health was contrasted against, say the livelihood of small business owners, the game hits differently.

Understandably, some might be apprehensive facing the game’s multitude of ethical quandaries while we ‘re still dealing with the deadly viral variants in the real world. Frontpunk revels in throwing moral curveballs at you. From using child labor to help with food shortages, adding sawdust to expend the food supply, to quickly discarding the dead, you’ll face a procession of unscrupulous possibilities. And you’re not able to dodge them all.

Smartly, the game keeps things from being too abstract, as well. Periodically, you’ll be asked to interact with someone who endured tragedy because of your decisions. So, it’s completely understandable if you not ready to tackle Frostpunk’s moral misery. 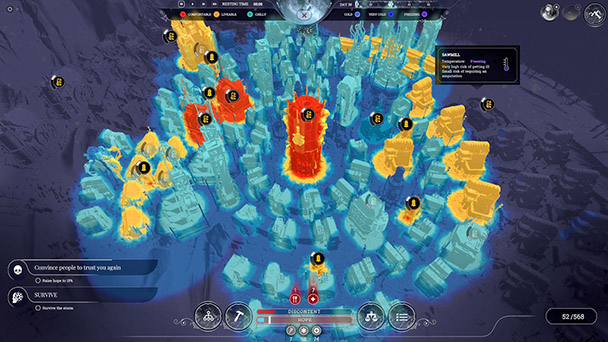 Personally, replaying the game felt a bit cathartic. While some decisions can make things less dismal, there are no simple solutions. And that’s the lesson I probably need to hear when trying to work toward some kind of closure amid a global tragedy. In an odd way, Frostpunk is helping me work through some things and get past some of the decisions and behaviors that incited tragedy. It’s still a game though, so don’t expect anything more that fictional situations that encourage reflection. But at least it’s something.

Venture into the icy contexts on Frontpunk and you’ll be provided with a tutorial that only imparts the essentials. While some might desire more guidance, it’s clear the developers want players to discover many of the game’s intricacies on their own. Like most city simulations, you’ll have to deal with dispersing limited resources toward a multitude of different demands. But here, the supplies are always scarce, the mood perpetually grim, and often Fronstpunk will have you second-guessing your own decisions. Occasionally, it even lines to path to becoming a managerial monster with alluring intentions. 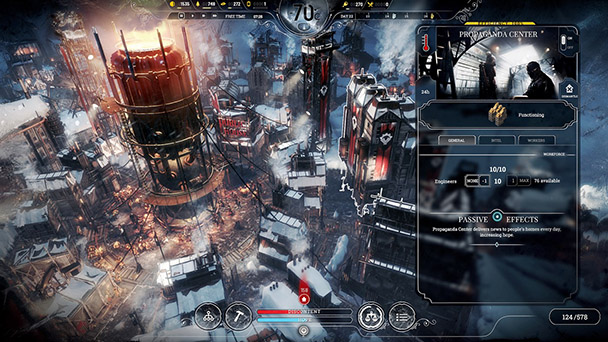 Living with Your Decisions is Persistently Tough

Coal is constantly consumed by your generator, steam hubs, and heaters, making it an essential commodity to offset the sub-zero temperatures. Wood crates and frozen trees provide material for building, while steel is essential for the construction of technologies. With the collection of steam cores, Frontpunk allows for the creation of automatons who can work without sleep and are impervious to freezing temperatures. The downside is that they’re never quite as efficient as humans during the workday, even with technical upgrades. But they’re work without grievance, unlike the laborers complaining about the expended hours I just ratified in the game’s Book of Laws.

While most genre entries periodically require players to save up for a new expenditure, it’s never an easy task in Frostpunk. Sure, you’ll have enough materials to build a guard tower that can keep bandits from stealing from your already insufficient food supply. But can you live with yourself after breaking a nutritional pledge to a grieving mother? Fascinatingly, the game demonstrates how fascism can befall a nation. Initially, I set out to protect my people. But several hours later, I found myself enacting depraved laws and constructing facilities to public execution the loudest voices of dissent. Like the final act in most tragedies, I wondered how I stayed so far from my own ideals. 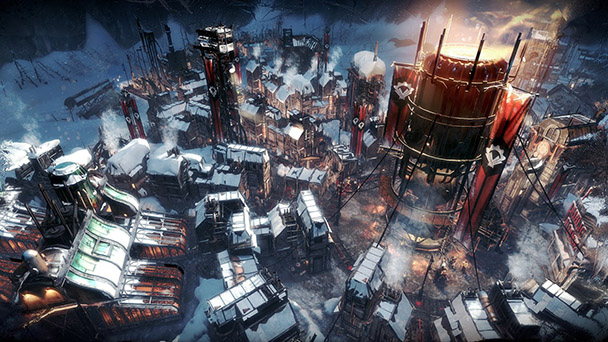 Unlike most city sims that stretch out for as long as you are interesting, Frostpunk’s main mode has a story that ends after about a month and a half. Although your decisions with influence the trajectory of your outpost, you’ll face the same hurdles every time. You’ll likely improve with each replay, preparing for what lies ahead, but many players might appreciate the first instance you are confronted with new revelations. For masochists looking for a more traditional way to play the collection offers an endless mode as well as several different scenarios where you’ll be forced to wrestle with a refugee crisis.

But more variation is found in the Collection’s compilation of downloadable material. The Last Autumn is set before the events of the game, at the beginning of the global cooldown. You’re tasked with building the first generator, which is a rather momentous undertaking, requiring massive amounts of materials. While resources are more plentiful and the environment is less hostile, you’re pitted against the clock. As such, this expansion ratchets up the tension rather nicely, and you might even be in constant fear of being banished from your position. As with most expansions, you’ll receive the requisite additions, from docks to a telegraph system. But you’ll also have to deal with an influx of new dilemmas, with worker strikes being one of the most exasperating. 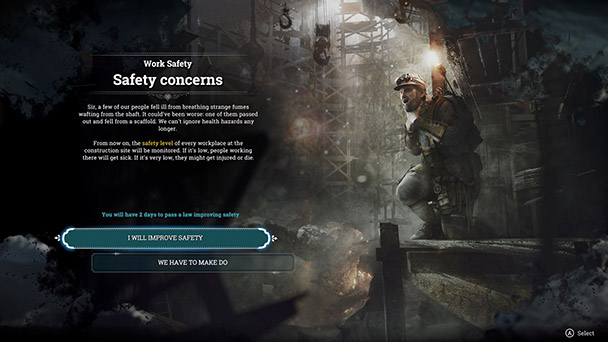 Content That Isn’t as Proficient as the Main Game

Woefully, the collection’s other DLC doesn’t far as well. On The Edge positions your generator near a cliffside with a very limited number of resources, promoting trading with other outposts. While the contribution of six tracks from composer Piotr Musiał brings another six viola-drenched songs, the remaining addition do little more than sustain the buying and selling of steel and coal. Similarly, The Rifts contributes the ability to build bridges but only at a limited number of preset positions.

Given the presence of a single respectable expansion, frugal minded players might opt to purchase the frequently discounted base game (currently $11.99 with Xbox Gold) alongside The Last Autumn. Sure, you’re carving away at publisher profits but not purchasing the new collection. But Frostpunk recurrently reminds us that harsh decisions are intermittently needed.

Frostpunk – Complete Collection review
Far removed from the idealistic municipalities of Sim City, Frostpunk: Complete Collection will put you through the ringer, facing a succession of tough ethical decisions. But living with your choices might be the real challenge. When Frontpunk was originally released in 2018, it made quite an impact. Up to this point, most city builder games were cheerful affairs. Typically, you were given a meager village and by assigning&hellip;

Summary : City builders can be challenging affairs, requiring forethought to succeed. Frostpunk adds a whole new layer to your managerial duties, requiring players to trek through some morally murky spaces.