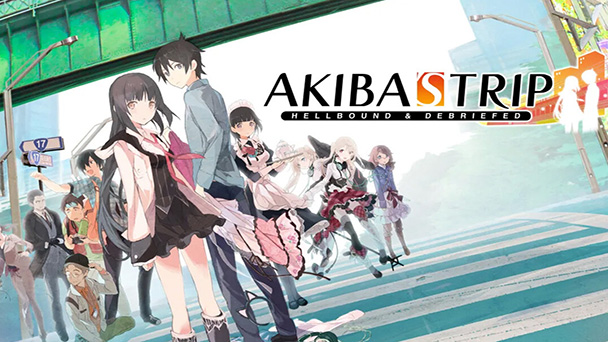 Hellbound and Debriefed invites players to the remastered inaugural outing in the Akiba’s Trip series. The writing is spirited, the location is delightful, but the action doesn’t quite hold up ten years later despite a few enhancements. 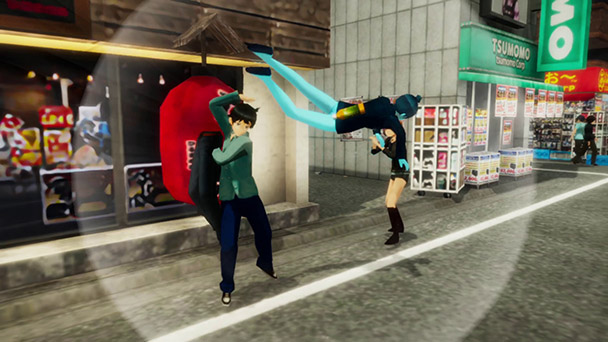 From Steins;Gate to Digimon Story: Cyber Sleuth, Akihabara has served as a recurring setting in gaming, which isn’t surprising. Ever since the 1980s, the district has served as a haven for otaku, brimming with all types of delight. Nestled between stores selling games, figurines, manga, and anime, are multi-level arcades and themed cafes. But few franchises have captured the eccentric charm of “Electric Town” as aptly as Acquire’s Akiba Trip series.

In the West, 2014’s Akiba’s Trip: Undead & Undressed functioned as our introduction to the series, following by 2017’s Akiba’s Beat. With the release of Akiba’s Trip: Hellbound and Debriefed, Switch and PC owners are able to revisit a remastered version of the original PSP game. 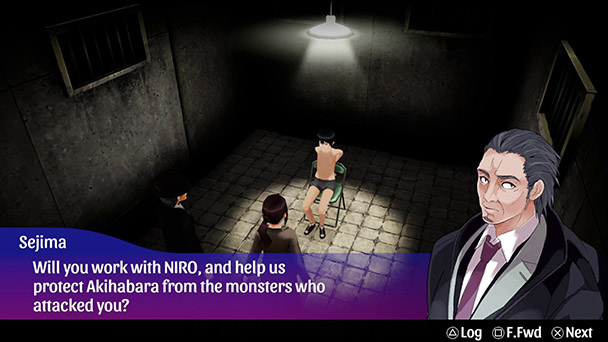 Ten years on, the title feels like opening a time capsule. While the presence of mock (“SECA instead of SEGA, KCF instead of KFC”) storefronts recreates the look of the labyrinthine district, the game’s dialog occasionally captures an era before political correctness took hold, joking about topics like “loli kuderes”. Unfortunately, the game also is a reminder of the PSP’s limitations, despite an earnest attempt at modernization via remastering.

Scarier Than the Prices at a Maid Cafe

The game’s open text crawl imagines 2011’s Akihabara as a district filled with mystery. Nanashi, the game’s protagonist, is lured in a vacant alley and nearly beaten to death state while searching for a friend. A mysterious woman named Rui comes to his aid, giving him some of her blood. He awakens with his wounds miraculous healed and an investigation team seeking answers. Nanashi is strongarmed into joining the organization, which is hoping to rid the streets of Akiba of this vampiric presence. 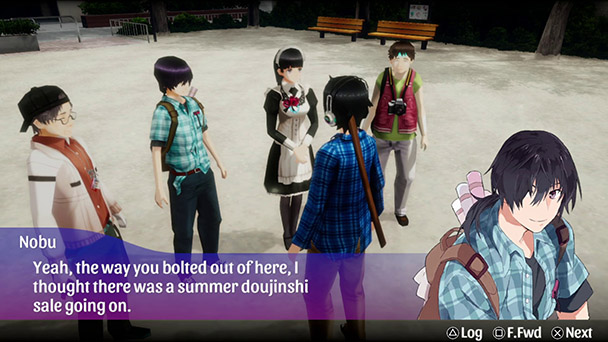 The Right Amount of Risqué 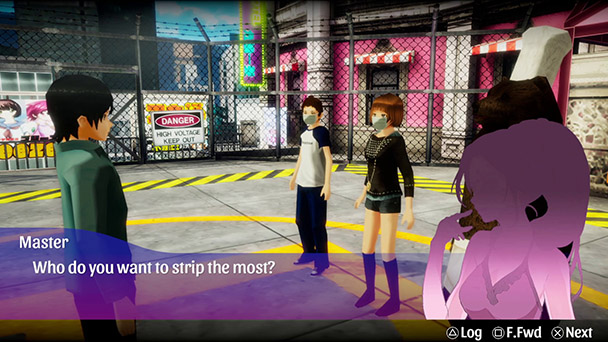 For the open-minded, the context and comedy will have retained its charms. But when it comes to play, Akiba’s Trip can feel like a collection of minor aggravations. Like due to restraints with the PSP hardware, the game’s landscape is broken up into smaller sections, with a map screen appearing anytime you step outside of a zone. But occasionally, you’ll be pushes into a fracas on the edge of an area, which can make you lose progress when battling a mid-boss.

You’ll be doing a lot of fighting in Akiba’s Trip. To eliminate Shadow Souls you’ll need to forcibly strip away their clothing, exposing them to light. To accomplish this, you’ll hammer on a trio of button striking the head, torso, and legs. Cause enough damage to one of those regions, and you’ll receive a prompt allowing you to remove an article of clothing. When fighting a single aggressor, the system is acceptable if a bit too simplistic. But when fighting groups, the action can get frustrating, since you aren’t able to select a specific target. 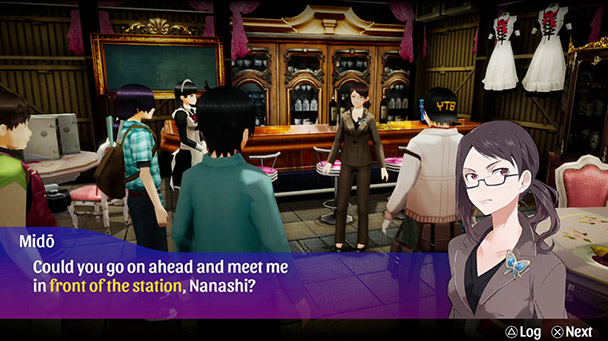 One upside is that pugnacious feeds into systems. Without the proper training, you’ll be recklessly tearing the clothes from enemies. But by paying for the proper training, you get to keep pieces of attire. Different articles of clothing can provide different stat boosts (or a bit of fun when you put on a frilly maid costume) or you can sell any excess apparel, feeding the gameplay loop for more training. Cash plays a key role in which one of the three endings you’ll receive, making money management nearly as important as fighting prowess.

Alternatively, you can spend your money on weapons that range from the useful like a wooden sword to the comical, such as a laptop or dakimakura. Yes, in the game’s version of Akihabara you’ll get to wear a frog suit while beating the snot out of people with a love pillow. That element hasn’t lost much charm in the past decade. But what does feel decidedly clunky is the game’s lack of clues. All too often, advancement in main and sub-missions hinge on speaking to a specific NPC or getting an item from a certain store. Woefully, there’s not a lot of clues to point you in the right direction. 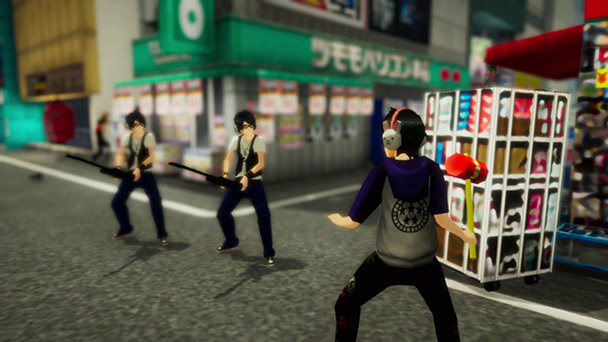 Like many PSP remasters, Hellbound and Debriefed’s visuals seem fated for surface-level criticism. Yes, characters and environments remain low-poly, a consequence of the PSP’s meager capabilities. But undoubtedly, the remaster attempts to improve things while maintaining the integrity of the original game.

The persistent jaggies of the PSP release have been largely excised, with improved textured eliminating much of the shimmer. Akiba’s Trip framerate would often sputter on the portable system. Even with an older graphic card, play is persistently fluid. For those who prefer dubbed voiceovers, Acquire has recorded an entire English track. The downside is that technical quality is a bit inconsistent, which seems to be a rather consequence during the pandemic. 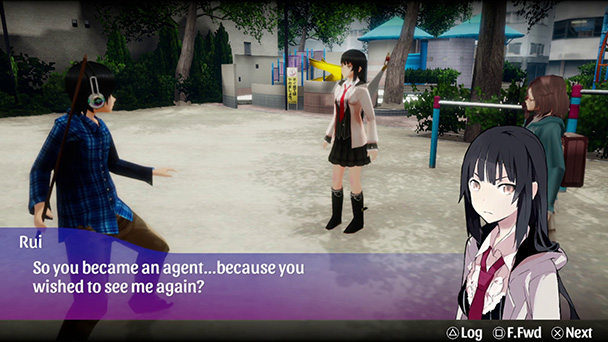 Enjoyment of Hellbound and Debriefed hinges on how important action is for you. Players attracted to the game for the fighting might feel disappointed. In 2011, the fisticuffs were spartan and a decade later they feel archaic. But while street battles make up a signification portion of the title’s playtime, they’re balanced by a comical script and a captivating recreation of Akihabara. If skulking though Electric Town as a keyboard-wielding Shine Maiden sounds entertaining, this trip might be worth taking.

Akiba’s Trip: Hellbound and Debriefed review
Hellbound and Debriefed invites players to the remastered inaugural outing in the Akiba&rsquo;s Trip series. The writing is spirited, the location is delightful, but the action doesn&rsquo;t quite hold up ten years later despite a few enhancements. From Steins;Gate to Digimon Story: Cyber Sleuth, Akihabara has served as a recurring setting in gaming, which isn&rsquo;t surprising. Ever since the 1980s, the district has&hellip;

Summary : A decade from the original PSP release, the suggestive sequences and the silliness are endearing. But Akiba’s Trip: Hellbound and Debriefed’s fighting is its own worst enemy.