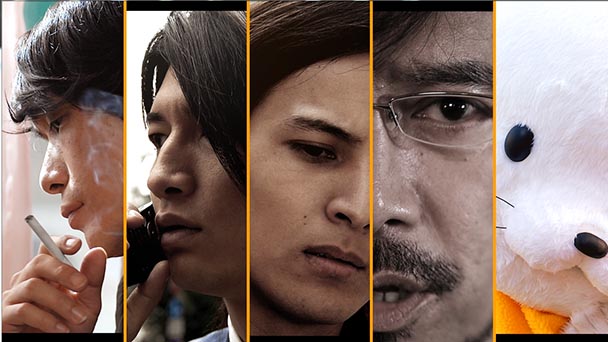 Referred to as the visual novel for people who don’t like visual novels, 428: Shibuya Scramble has the privilege of being the genre’s only effort to obtain a perfect Famitsu score. If that’s not intriguing another, we pose a series of question toward David Kracker, who served as localization director for Spike Chunsoft’s upcoming title.

Tech-Gaming: Without veering into anything close to spoiler territory, can you provide insight into what 428: Shibuya Scramble’s story is about?

David Kracker, Localization Director: The story details a single day in Shibuya, Tokyo’s center of youth culture, as seen by five different protagonists. We open with a police stakeout—the daughter of a well-to-do family has been kidnapped and the criminals demand her sister make the ransom handoff in front of Shibuya station. This raises all sorts of red flags—why make the handoff at Tokyo’s busiest intersection? Of course, the sting operation doesn’t go as planned, and the resulting chaos brings together the lives of five individuals: ex-gang leader Achi, rookie detective Kano, rabid journalist Minorikawa, brilliant virologist Osawa, and Tama, a part-timer trapped in a cat suit.

It’s up to the player to untangle these threads of fate and get to the bottom of the kidnapping, all the while dealing with yakuza loan sharks, bioterrorism and an ever-approaching article deadline…

T-G: Does the game adopt a Rashomon-like approach, where reality is an amalgam of different characters’ perspectives- or I am I reading too much into the concept of an ‘intersection’ (laughs)

DK: The story is told from the perspective of five characters, but the Time Chart lets you freely jump between them to see the same events from different perspectives and develop a more complete picture of the truth.  I see it as more like a Coen Brother’s film, where the protagonists all influence each other even if they never interact directly.

As the story progresses, you’ll be given choices that affect the current character and can also have unexpected consequences on the rest of the cast. I recommend you actively make bad decisions! Dead ends can offer foreshadowing or insights into a character’s motivations (and some are just fun, like the one where Tama, the cat costume mascot, becomes an internationally wanted criminal).

In my favorite pair of bad endings, two characters play a life-and-death game of rock-paper-scissors. Somehow, BOTH of them end up thinking they lost. Only the player, who has seen both sides of the story, knows the truth. There’s probably an important life lesson in there somewhere… 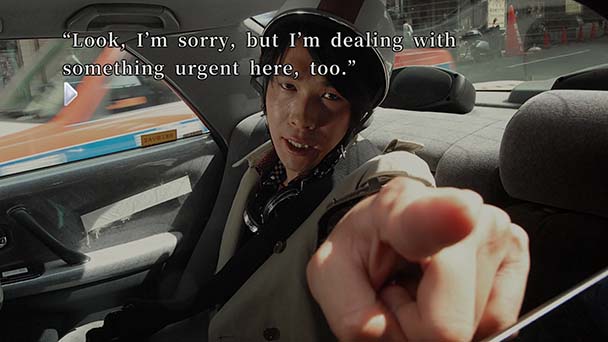 T-G: What about the technical aspects? Does this version offer any aesthetic advances such as widescreen support?

DK: Compared to the original Japanese release, the PlayStation 4 version uses higher resolution source assets and a redrawn UI. The improvements are small but they add up.

T-G: What influenced the decision to port the game to PS4 and PC? Was a Switch iteration ever discussed?

DK: We recently began self-publishing on Steam as an experiment. The success of our other visual novels, such as the Danganronpa and Zero Escape series, proved to us that there was a demand for similar titles in the west, so we decided to put our best foot forward with the crowning achievement of our back catalog. 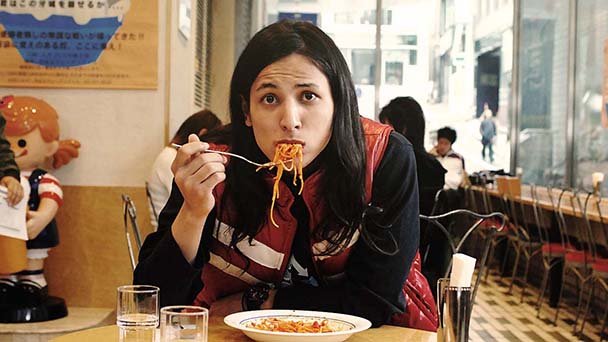 T-G: What’s your approach to localization? While there’s a constituency of players who prefer a direct translation, often that method results in some pretty dry dialog that loses some of the nuances.

DK: I think the goal of localization is to deliver the same experience a native speaker would have in the source language.  What this “experience” entails varies by title, but in the case of 428 it boils down to the characters, tone, dialog and, most importantly, the gags. There was already a strong English-language script waiting in the original text and lead translator Kevin Frane and Alexander O. Smith of Kajiya Productions did a fantastic job of adapting it.

Since (mostly) all scenes use real-world actors and locations, it was impossible to  “westernize” story elements—you can’t say a character is eating spaghetti when they’re clearly eating soba noodles (to clarify, all scenes of spaghetti eating are presented unmodified from the original)—so I decided to embrace the Japanese-ness and introduce cultural concepts in a non-intrusive way. We did this by slipping in bits of expository text when necessary and via the TIPS system—an in-game glossary that explains terminology on the fly—so, for example, if you don’t know the story of the Hachiko statue outside of Shibuya station, you can pop open the TIPS menu and learn a bit of trivia.

T-G: Anyone who has spent an extended amount of time in Tokyo begins to feel the distinctiveness of the twenty-three wards. How does 428 capture Shibuya’s feel?

DK: The crowds, the energy, the way you seem to always be walking uphill—428 gives you a good idea of what it would be like to wander around Shibuya for a day. The street gangs of 428 may have moved north on the Yamanote loop line, but the feeling that anything could happen is still there. 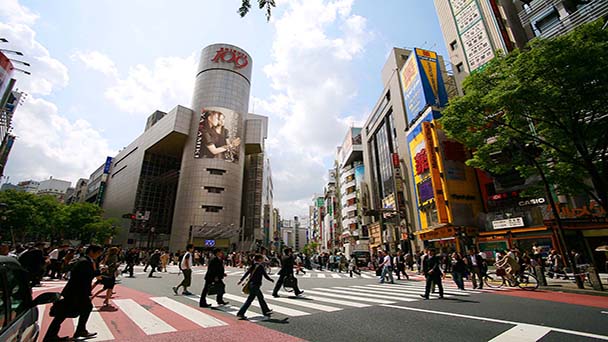 T-G: For those, like me, who appreciate verisimilitude, how many identifiable elements of Shibuya are in the game? Obviously, the crossing is depicted by what about Hachikō, Ichi-Maru-kyu, or the Cerulean Tower?

DK: You can spot the city’s landmarks in the background (how can you shoot the Scramble without including the 109 building?) but it’s the small things that stood out to me. There’s a scene where Achi and Hitomi cross the Shibuya River on a walkway that overlooks a canal flanked by rows of tall buildings that stretch to the horizon. When I first moved to Tokyo, I remember trying to get the perfect sunset shot at that exact spot.

T-G: 428 is the only visual novel to earn a perfect score in Famitsu. What elements do you feel resonated most with the magazine’s writers?

DK: (Googles the old Famitsu Cross Review) Well, to paraphrase the original… they were taken by the interconnected storyline, brilliant sound design and comedic tempo. It’s a visual novel for people who don’t like visual novels. 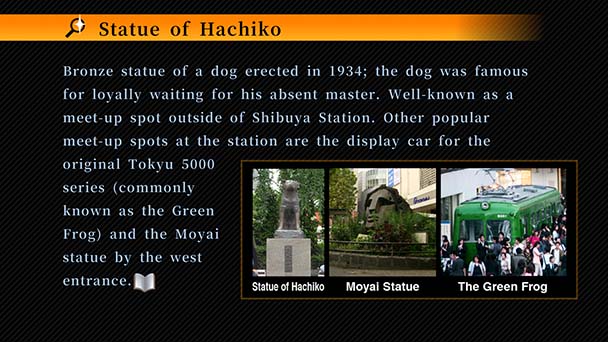 T-G: Shibuya Scramble is the work of Koichi Nakamura, who now hold the position of Spike Chunsoft’s Chairman and CEO (and was president at Chunsoft before the merger). Can we expect to see any more of Nakamura-san’s efforts (such as Machi) revived?

DK: 428 is part of an adventure game brand dubbed the “Sound Novel” series for, you guessed it, their unique sound design and realistic visuals. This includes 428’s predecessor, Machi: Crossroad of Destiny, as well as the horror titles Imabikiso (literally “The Searing Herbs of Hatred”) and Banshee’s Last Cry (which got a cellphone release in the west). Given the chance, I’d love to bring any of them to a wider audience.

For the time being, you’ll have to make do with a hidden Easter egg in 428—a playable version of Door Door, Nakamura’s debut title from when he was a hobbyist programmer. But you didn’t hear it from me, OK?

T-G: Your secret is safe here. I’m sure no one is reading this. Thank you for your time. 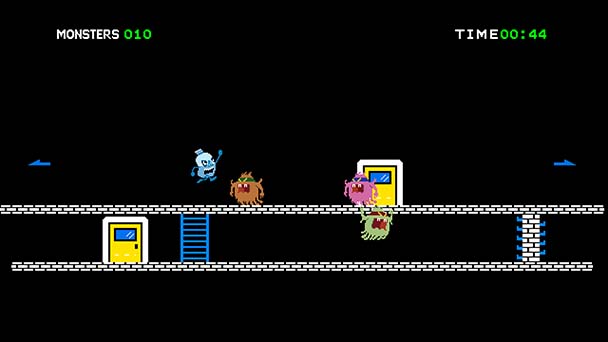 Tech-Gaming wishes to thank David Kracker, Arianne Advincula,
and Spike-Chunsoft for their participation.