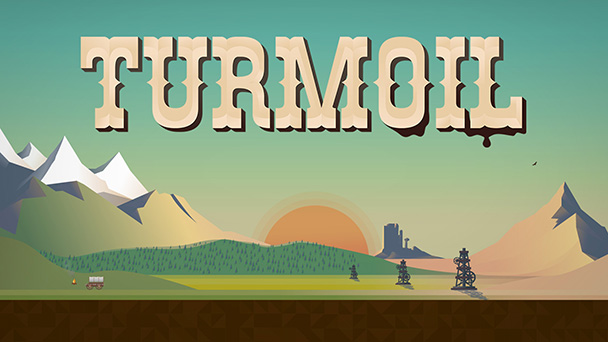 There’s a lot of enjoyment in figuring out the best path to success in Turmoil. But once these nuances are discovered, the games gradually becomes less gratifying.

On the surface, an oil drilling simulation set at the end of the nineteenth century might sound like something assigned by a sadistic history teacher. But Turmoil, originally a 2016 PC release, manages to mine enjoyment from the setting, at least in the short term. Much of this stems from developer Gamious’ (iO, Lines) shrewd design decisions, which streamlines the duties of a budding oil baron. But several balancing issues undercut the creativity.

The recently released Switch port permits players to jump into the original game, the bundled DLC campaign entitled “The Heat is On”, or an abbreviated single-year simulation. Regardless of your selection, play follows a similar cycle. 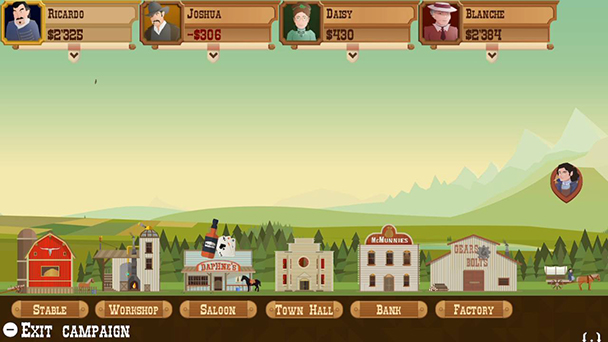 You Know the Drill

After bidding a parcel of land, you’ll take a horse-drawn carriage to your plot. Initially, you’ll want to hire a dowser, who walks across the property, surveying for pockets of crude below. Occasionally, they’ll whistle and point to oil deposits below. But when the reserves are too deep, they’ll pace back and forth and occasionally walk off the side of the screen. If they do indicate there’s black gold somewhere below, you’ll want to build a drilling rig.

After placing the towering wooden derrick, you’ll begin the drilling process. Using the Switch’s analog stick, players lay down a path through the earth. If you’re lucky, the route will reveal orange dirt which signifies that a patch of crude is adjacent. Putting a pipeline in one of these reservoirs results in a satisfying slurping sound and visual representation of oil traveling up the pipeline. Of course, you’ll need carriages to transport the petroleum to the two companies with headquarters on the far sides of the playfield. Since offered prices constantly shift, you can also build a tank to store a limited amount of crude until prices inch back up. Any game that makes you feel like the tyrannical Aunty Entity in Mad Max: BeyondThunderdome is doing something right. 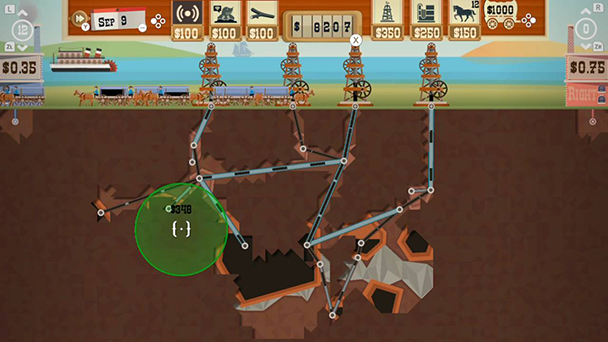 Although the basics are well implemented through a minimal user interface, there are a few blemishes that affect control. Pipe management is an issue and it’s all too easy to accidentally turn off valve joints, which costs money. Once you unlock an upgrade that offers thicker piping, selecting individual sections can be troubling. Occasionally, other egnigmatic elements emerge. While I can purchase mole to randomly dig through the ground and potentially find oil deposits, sporadically Turmoil won’t let you use them. Worse, the game doesn’t tell you why. If you’re going to make a game about pure capitalism (not really- you’ll encounter some environmental fines) let me squander my money on rodents.

I Drink Your Milkshake!

In the main campaign, oil is initially siphoned from the land in short, fiscal quarter-long stretches, making it rather difficulty to earn more profit than your three competitors. But before long, Turmoil removes the restriction, allowing you to really work the parcel. Between rounds, new stores in town emerge. Many offer the ability to upgrade your drill bit, allowing for scanners that deliver a better picture of what’s underground or new bits that let you drill through solid rock. There’s a caveat with perks though, with the game departing from traditional game design. To use a new technology, you must purchase it, and there’s often an activation fee, which it both irksome and maintains the feel of dealing with unscrupulous characters. The banker who charges a 25% interest rate on loans feels a lot like today’s credit card companies. 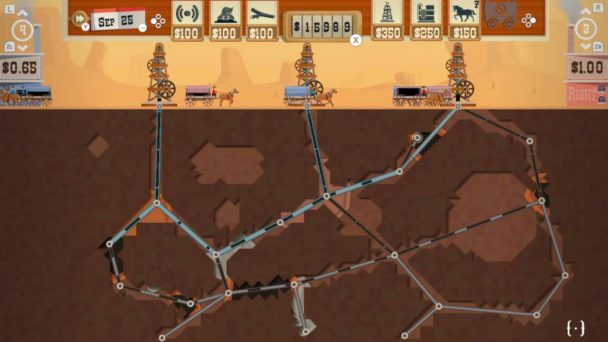 But potentially, here’s a bigger issue: many of the upgrades are overpriced. Sure, there’s some essential ones, but others you won’t need on your route for becoming the town mayor. Prices for some items are often the equivalent of months of profits. While likely realistic, if you try playing Turmoil like most video games, upgrading to remain relevant, you’ll likely make things harder for yourself. One example is found in the timer, a $10,000-$30,000 upgrade that slows spillage from your rig. Simply hire more $150 horse carts and you won’t have worry about overflow.

While natural gas arrives too late in the base game, it’s more fully integrated into “The Heat is On” DLC, which also add magma, new characters, and twists on returning ones. It’s both an addition and subtle revision. Chances are, you’ll wish the developers would have retrofitted some elements of the original game as well. 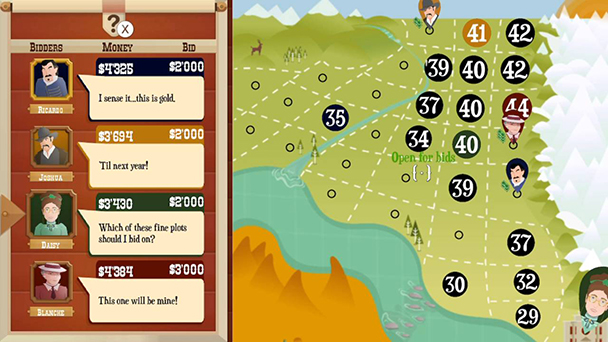 Ironically for an economic simulation, Turmoil suffers from the law of diminishing returns. Initially, the game’s tutorial is strategically ambiguous, letting you discover things like just how many carriages it takes to reach maximum efficiency. Additionally, minor misfortunes occur and you’ll have to learn how to prevent and manage these events as best as possible. That’s a lot of fun. But once you’re learned what the best course of action is, the game begins losing appeal. Sure, discovering a large oil deposit is consistently thrilling, but as you repeat the same cycle, enjoyment dries up like those oil deposits.

Turmoil was played on Switch with review code provided by the publisher.

Turmoil review
There&rsquo;s a lot of enjoyment in figuring out the best path to success in Turmoil. But once these nuances are discovered, the games gradually becomes less gratifying.&nbsp; On the surface, an oil drilling simulation set at the end of the nineteenth century might sound like something assigned by a sadistic history teacher. But Turmoil, originally a 2016 PC release, manages to mine enjoyment from the setting, at&hellip;

Summary : When you are learning its intricacies, Turmoil is fascinating, offering a sleek simulation of life as an oil baron. But over time, the game’s simplicity and lack of compelling risk/reward elements cause enjoyment to eventually slow to a trickle.