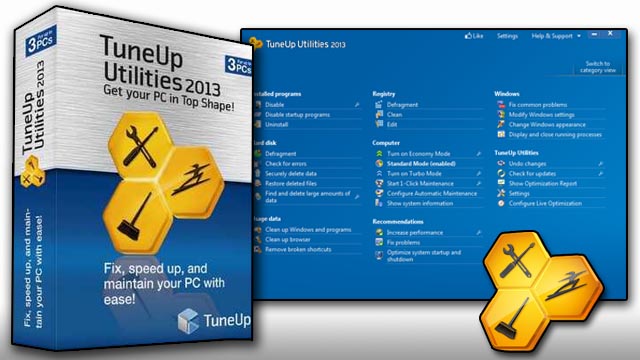 For PC owners, wringing an extra iota of performance out of their gaming rig can be just as gratifying as surmounting a stage in a particularly strenuous game. Unfortunately, the task can often be just as challenging. From gurus who warn about tampering with Windows registry to snake oil-esque software solutions which often exhibit hundreds of false positives in an effort to exaggerate their effectiveness, PC maintenance is often beset by conflicting methodologies. Now in its eleventh iteration across a fifteen year span, the TuneUp utility suite has become one of the most reliable, effective, and innocuous tools to boost performance. While the recent release of TuneUp Utilities 2013 doesn’t match the functional leap flaunted by previous releases, those who haven’t purchased a tuning app in the past few years will likely find the program’s collection of tools to be remarkably beneficial.

Two of the most useful components of previous TuneUp iterations were the Live Optimization- which adjusted the priority of running programs, and the Program Deactivator, a tool that revealed any hidden applications stealing valuable CPU cycles. With TuneUp Utilities 2013 the two elements have been integrated into Live Optimization 2.0. Beyond giving you a visual representation of the encumbrance each installed program has on your system, Utilities allows users to instantly disable background processes without uninstalling programs. In execution, these enhancements were able to shorten the boot times on our test systems with reducing a bit of CPU load. While the Optimization component purported to monitor our system, giving precedence to the most frequently used programs, TuneUp did suggest completely disabling Firefox until we added an exception. Still, on an antiquated laptop that had difficulty displaying stutter-free 1080P video, Utilities appeared to give the aging machine a small boost. 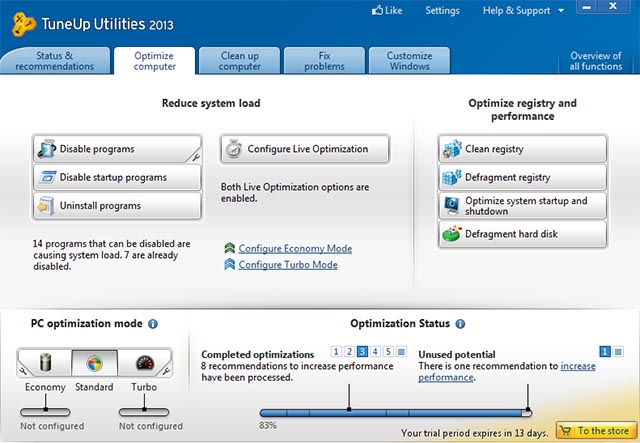 The suite’s touted Browser Cleaner 2.0 worked as claimed removing superfluous Windows caches and components, broken shortcut links, recent document lists, as well as browser cookies stored in Chrome, Firefox, and Internet Explorer. While the module is pleasingly fool-proofed- automatically preserving potential critical data such as log-in, form data, and backups of Windows update files, we found the tool only slightly more effective at removing reoccurring clutter than CCleaner. Alternatively, Disk Space Explorer did offer an illuminating graph revealing the files and folders which took up the largest space on internal and external drives and even displayed a scrolling table of each machine’s hundred most substantial space stealers.

The program’s Increase Performance element functioned as billed, identifying and hardware or software issues and optimizing internet setting and visual effects. On a machine with TuneUp Utilities 2012 installed and recently initiated, an analysis by this year’s version exposed no new optimization tips, suggesting not much has changed. Yet, for users who haven’t used TuneUp before, a bit of performance enhancement will likely be gleaned. 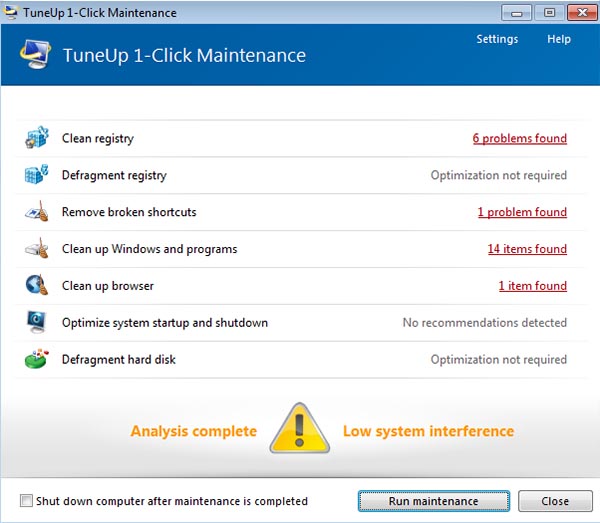 Naturally, TuneUp Utilities’ benefits are only effective if users commit to a regular cleaning regimen. While the toolset’s allows a group of vital tasks to be completed by running the 1-Click Maintenance component, pleasingly this can be set to automatically execute at regular intervals. Like last year’s iteration the incorporation of Turbo Mode temporarily turns off unessential programs and Windows’ visual flourishes to give machine a slight boost. In our PC Mark 7 benchmark tests, machines demonstrated a negligible, yet still palpable improvement in scores. For laptop users, Economy Mode performs a similar task, deactivating unessential applications in order to extend battery life.

Although TuneUp Utilities 13 isn’t a momentous advancement over its predecessor, there’s no denying the utilities effectiveness. On a variety of machines, the tools helped reduce boot, shutdown, and application load times, while reinvigorating Windows user interface, making habitual activities feel a bit snappier. The effect isn’t as noticeable while playing games, however TuneUp did increase the framerate a few units on a number of games, while Turbo mode gave an additional, albeit slight increase. While the utility suite is no replacement for a bleeding edge graphics card for those seeking a simple system tuning, TuneUp Utilities 2013 ranks as one of the best. 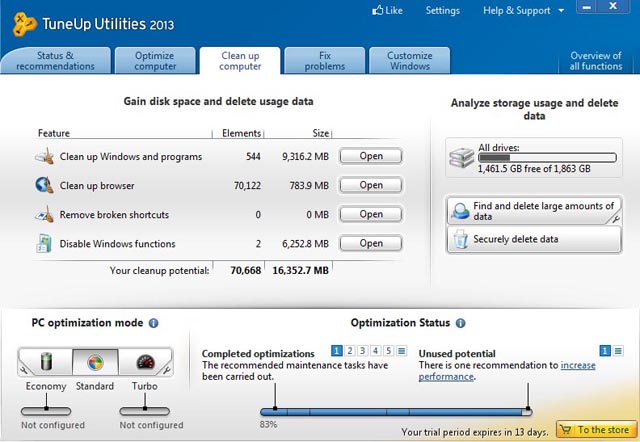