The Princess and the Pilot Collector’s Edition Review 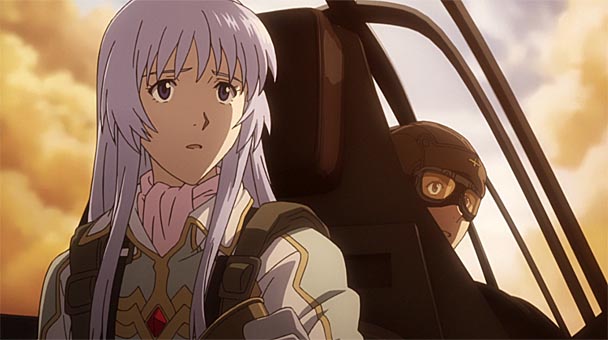 Unquestionably, shrewd thematic decisions propelled 1997’s Titanic to break box office records. Blending star-crossed romance with an ample supply of CGI spectacle, the film appealed to an exceedingly wide demographic. Similarly, director Jun Shishido’s The Princess and the Pilot (To Aru Hikūshi e no Tsuioku) echoes many of Cameron’s key plot points. From a plucky and confident young protagonist who rouses romance against the force of socio-economic difference, exhilarating action sequences set atop a cobalt sea, and even a sequence where the leading lady stands jubilantly on a (air)ship’s bow, the animated film recontextualizes  many of Titanic’s story beats. Save for a succinct running time and the absence of any Celine Dion caterwauling, The Princess and the Pilot even manages to compete with many of the qualities of the hit film.

We first meet the movie’s eponymous pilot, Charles Karino, as a young boy. He’s accosted by a gang of youths and beaten in an alley for being a ‘bestardo’- a person of mixed race. Showing no resistance to the assault, the scene closes with Charles looking upward toward the sole source of light, the azure skies overhead. Conversely, Juana del Moral hasn’t had to face hostility directly, sheltered by the blessing of nobility. Instead, the film hints at Juana experiencing slight resentment, as the Princess-to-be is consigned to marry another aristocrat- a move that’s motivated by affluence as much as amore. 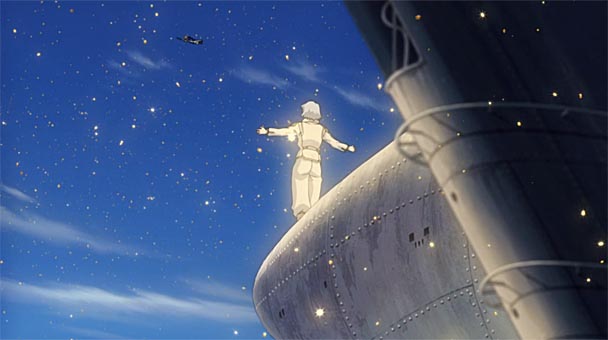 However, the Crown Prince’s duties don’t allow an immediate marriage and the nuptials are postponed until the war is quelled. But during thus duration, the war intensifies, punctuated by a vicious attack of the del Moral family mansion. Weakened and fearing a secondary attack on the princess, the military devises a clandestine plan to transport the young woman to safety. Karino, now a full grown pilot, is tasked with insuring she is unharmed while venturing through hostile enemy territory.

The bulk of the hundred-minute film focuses on the flight of the two leads, allowing sufficient time for character development amidst the invigorating dogfight sequences. Yet from the start of second act, The Princess and the Pilot never deviates from following the two leads– compelling viewers to infer about some of the poignant, off-screen events. While this approach allows us to appreciate the tacit relationship between the characters, it’s also frustrating- explaining little of the film’s world and the forces at play. The movie’s postscript is also a bit anticlimactic, with an epilogue revealing that the events may be a setup for a larger, more ambitious storyline. These criticisms aside, closing moments do swell into heartwarming wave, propelled by the tension of an increasing perilous flight. 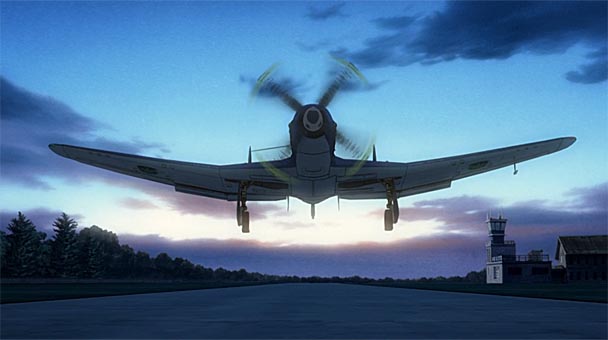 Veteran animation studio Madhouse (Vampire Hunter D: Bloodlust, RideBack) offers a commendable rendition of Haruyuki Morisawa’s light novel illustrations. Although characters aren’t drawn with an excess of detail and a soft focus is habitually employed, The Princess and the Pilot does offer a number of gratifying visuals. The speed of dogfights are depicted with quick edits and infused with blur effects, lens flares, and sumptuous CG backdrops. Many of the films shots of voluminous clouds are especially beautiful, flooded with golden, halcyon light, while brilliant flower fields, and an immense waterfall are also notable.

As NIS America’s inaugural feature film release (having localized over two dozen anime volumes across the past three years), it’s not surprising that the company persevered their typical publishing format. The Collector’s Edition of The Princess and the Pilot arrives in a sturdy cardboard housing. Inside, purchasers will find a single disc of Blu-ray media which provides an faultless 1080p picture and DTS 5.1 or LPCM 2.0 (subtitled) Japanese language track. Mirroring the publisher’s other collector’s editions, the $35.99 box set includes a full-color, thirty-two page hardbound book, which includes interviews with anime critic Ryusuke Hikawa (host of Anime Maestro), as well as screenwriters and visual designers. Punctuating each discussion are a bevy of attractive character sketches and environmental renders. 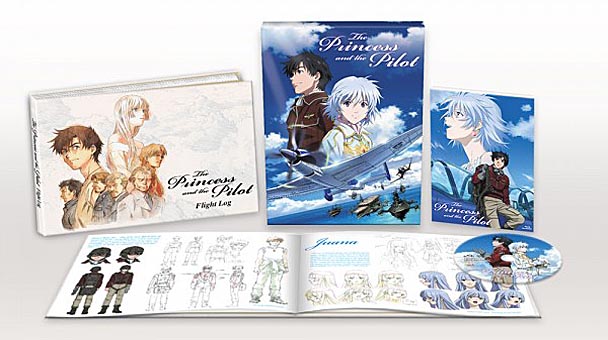 Although The Princess and the Pilot has a few narrative-based blemishes, these imperfections hardly hamper our appreciation for Charles and Juana, and more importantly, our desire for the duo’s safety. While rooting for the out-manned, disadvantaged underdog is a cinematic fixture, The Princess and the Pilot persists on the likeability of its leads and Madhouse’s dependable aesthetics.

Previous: Remember Me Review
Next: War Thunder Q&A and a Peek at PlayStation 4 Capability 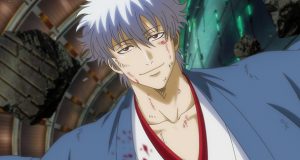