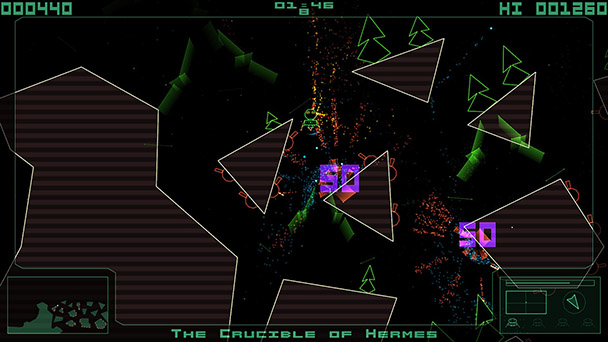 Each entry in this visually distinctive trio of arcade-inspired titles is enjoyable and challenging. But likely, you’ll wish the developers had extended the difficulty curve for each game. 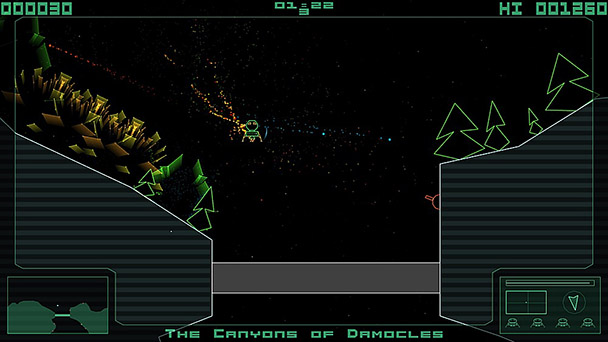 If you ever stepped into an arcade during the eighties, you probably witnessed the magnificence of a vector display. Far removed from the charming little sprites used by Pac-Man or Donkey Kong, vector-driven games resemble the stark output of an oscilloscope. In the darkened nooks of an amusement center, they were undeniably eye grabbing with the sinuous, wireframe ships and tanks of Lunar Lander, Battlezone, and Asteroids emitting an ethereal glow.

While the era of true vector graphics has long lapsed, the high-resolution capabilities of modern monitors do a remarkable job at recreating the visual appearance. If you’re played an emulated version of Tempest or Gravitar in one of the Atari Flashback compilations or messed around with MAME, you’ve probably seen the dazzling particle effects or enchanting minimalism associated with a vector graphics-based game.

With the release of Terra Lander, Terra Lander II – Rockslide Rescue, and Terra Bomber in the eShop, Switch owners are now privy to a trio of titles rendered in vector display style. While each takes inspiration from classic coin-ops, all three titles build upon the austere foundations, adding additional conflict to give reflexes a through workout.

They are available separately as well as in a physical format that bundles the trio of titles (for an additional ten dollars). Whether you’re eyeing a piecemeal approach or thinking of purchasing the compilation, we’ll look at each game separately. 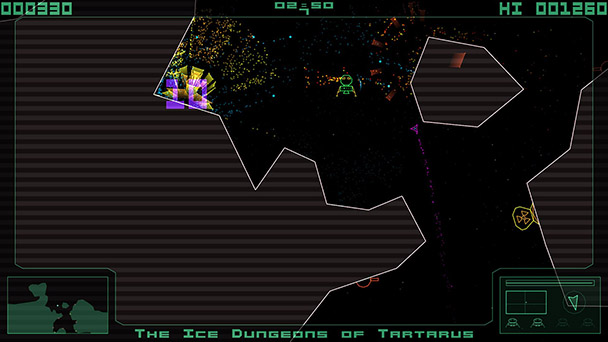 Atari’s 1979 coin-op Lunar Lander challenged players with safely dropping a space module on small platforms nestled in the middle of a jagged environment. Between a limited amount of fuel to power your thrusters and a near-constant concern over momentum the task was rather daunting. Terra Lander builds on the original game’s foundations by giving your ship guns, which are used to shoot fuel dumps, remove environmental obstructions, and take out enemy turrets.

It’s a captivating formula that was also employed by titles such as Thrust and Oids as well as more recently by Gravity Crash/Gravity Crash Ultra. While the first five stages are manageable, the game quickly tasks your fragile craft with navigating through narrow passages, which is appropriately tense. Soon, Terra Lander turns sadistic, filled those claustrophobic canals with strings of turrets that put out a constant stream of projectiles. Although your shots ricochet off walls (as do your enemy’s) and you have an aiming cursor, it’s all too easy to overlook a single enemy bullet among the visual chaos. 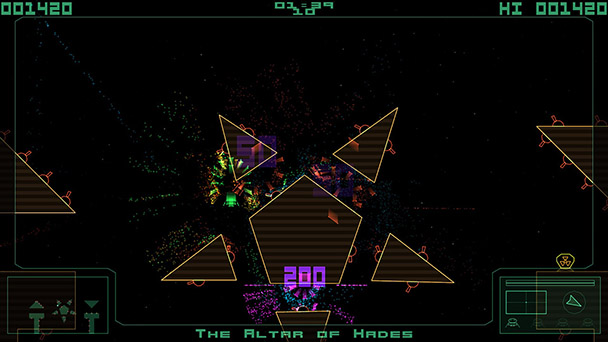 Between perks like shooting all the fuel tanks in the previous stage to earn double fuel in the next level, there are methods to make the journey an infinitesimal amount easier. But most players might toss their space towels in halfway through the twenty-stage trek. As such, it would have been advantageous if developer Funbox Media provided more stages and relaxed the difficulty curve instead of imitating the exertion of a quarter-quaffing arcade game. Things more from fun to frantic a bit too quickly.

Like most sequels, Terra Lander II raises the intensity. Landing your craft in no longer the goal, but an intermittent objective as you load standees into your craft. Touching down isn’t quite as forgiving as it’s predecessor. Here, Lander II’s craft feels heavier and it’s all too easy to turn your shuttle into a flaming wreck if you decent on a landing pad with too much force.

Your space module retains its trusty gun, which is fortunate, as the sequels turrets now output stream of offensive fire. Venture into a subterranean chamber without angling some weaponry and you’ll likely face a disheartening death. Fortunately, the people who need a space taxi are immune to munitions. This time out, you also have a tractor beam that can be used to hoist the boulders that litter most environments. Naturally, they habitually block your path, so you’ll have to lift them to a secure place. Often, this means you’ll have to be a bit more judicious with fuel management. 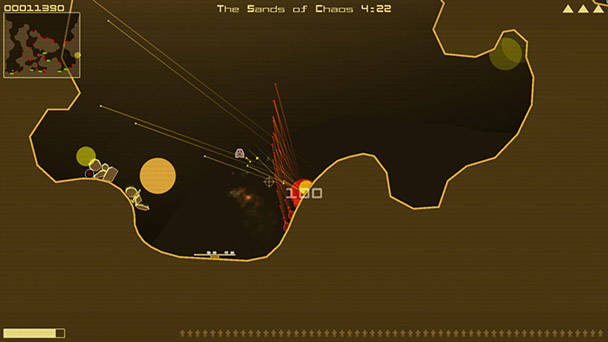 The sole downside is that the game only has ten levels which repeat with a higher difficulty upon completion. Again, the challenge level starts high and grows exponentially tougher, so even seeing them all is a badge of honor.

Paying homage of 1981 arcade hit Scramble, Terra Bomber is a horizontally-scrolling shooter. Soaring above the landscape, you have two different types of defenses, a forward-firing gun as well as arcing bombs. But unlike Konami’s coin-op classic, you have some control over the angle on your ordnance and slowing down your ship permits a near vertical drop. Given you’ll need to power your ship by destroying the fuel tanks that dot the topography, you’ll appreciate the convenience.

Also sprinkled across the land are rockets that will start their deadly ascent as you approach. Evade their launch and you’re not done with them. Instead, they’ll encircle you like a hungry hawk revolving its prey. At least, until you gun them down. Strafing by hovering just above the landscape is satisfying especially when you fire through a succession of defenses. But a collision with the ground is just as deadly as any enemy. 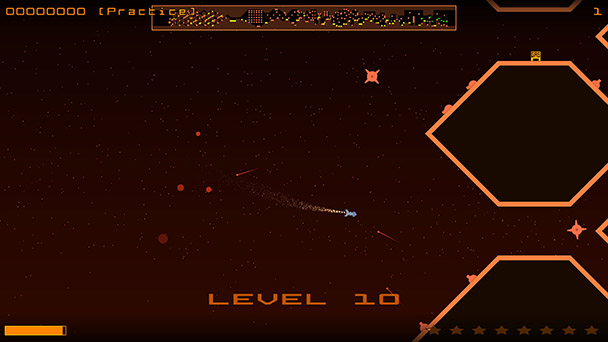 Simultaneously dealing with surface-to-air missiles, keeping fueled and adjusting to the changes in elevating proves to be engaging balancing act. But again, level design is a nagging issue. Each of Bomber’s ten stages are lengthy and offer quite a challenge. But a preset mission structure means you’ll be flying over the terrain with each game. Tempest and Battlezone offered level selection at the beginning of a new game. Woefully, this is the rare instance where the developers shut tradition.

One Steam, each of the Terra titles sells for five dollars, which is a fair price for these arcade-inspired games. But the cost is doubled on Switch, which means you should probably wait for a sale before adding any of them into your digital library.

The Terra Trilogy was played on Switch
with review code provided by the publisher.

Terra Trilogy: Lander, Lander II & Bomber review
Each entry in this visually distinctive trio of arcade-inspired titles is enjoyable and challenging. But likely, you&rsquo;ll wish the developers had extended the difficulty curve for each game. If you ever stepped into an arcade during the eighties, you probably witnessed the magnificence of&hellip;

Summary : There’s fun to be had with each game in the Terra trilogy. But each takes a uncompromising approach to level design, which limits long-term enjoyment.