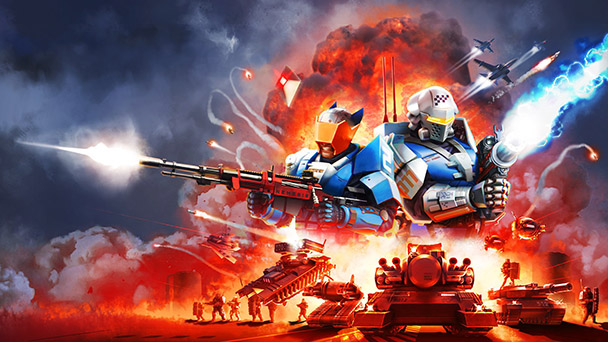 SYNTHETIK: Ultimate want you to unlearn some of the techniques that most twin-sticker shooters employ. This game is less about unrealistic circle-strafing, and quickly darting out of cover with a full magazine, guns blazing. 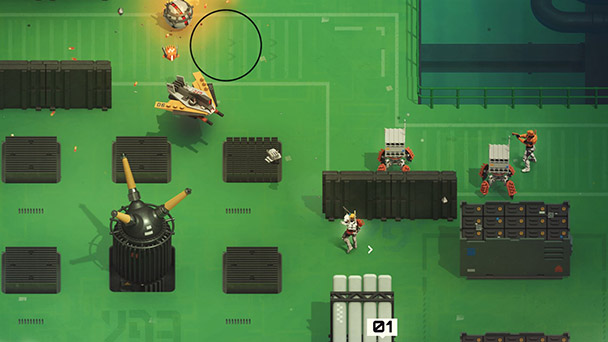 At first glance, SYNTHETIK resembles just another roguelike, twin-stick shooter. With only a modicum of Terminator-esque storytelling to slow things down, the game quickly hurls humankind’s last hope into its procedurally generated levels. Here, eight different character classes comb through the game’s stages, eliminating any robo-enemies scattered about. Fortunately, assistive elements are plentiful. Weapon boxes and item boxes increase your arsenal, while ammo dumps ensure you don’t have to be too frugal with the munitions. There are also plenty of environmental objects that provide protective cover.

Like many roguelikes, it can occasionally feel like the random number generator has it out for you. Occasionally, you’ll attract a horde of homing missile-using adversaries, who will chase you with cybernetic determination. When this happens, even your dashing ability feels futile. But in keeping with convention, after dying any earned experienced helps to unlock new abilities. 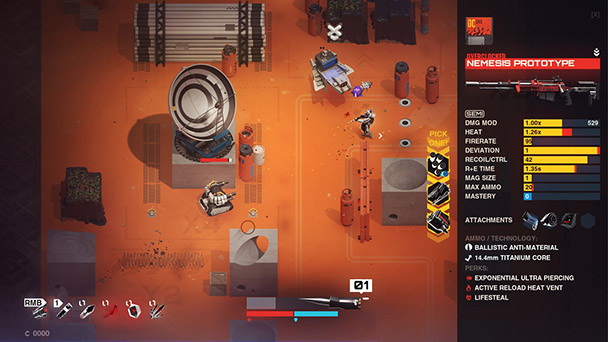 But slowly, it becomes apparent that SYNTHETIK is crunching just as many stats as a game like XCOM. It’s cleverly hidden behind the scenes (but push ‘left’ on the directional pad to make a peek). Admirably, the title is trying to shoehorn many of nuances of a turn-based tactics game into real-time, two-dimensional combat. The method isn’t perfect, but the recent Xbox One port of SYNTHETIK: Ultimate will please audiences who like their action a bit on the brainy side.

Occasionally, SYNTHETIK feels fresh because of design decisions that undo years of tradition. Reloading your weapon is deliberately cumbersome, requiring a press of the left bumper, followed by a precisely timed pull of the right trigger. Here, developer Flow Fire Games’ intent becomes obvious: SYNTHETIK is modeling the awkwardness of changing magazines in the middle of a gunfight. To drive the point the game lets you know every time you squander a bullet or even worse, dump a whole mag. Please don’t make me ever see you do that in a co-op match. 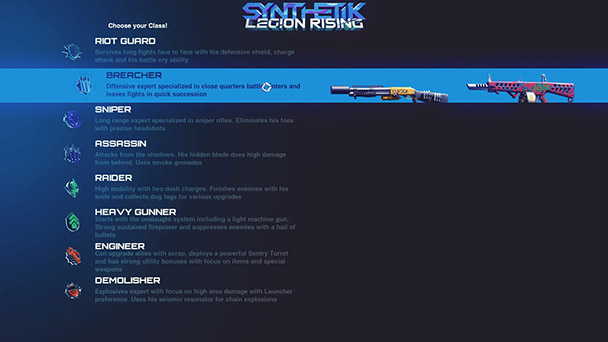 Most twin-sticker shooters task you with moving while simultaneously shooting. SYNTHETIK takes it a step further by projecting a cursor on the screen. While bullets follow a straight trajectory, if your pointer is on the target, there’s a greater chance of scoring a critical hit. If you’re able to hover the reticule over a person, it even shrinks, giving greater accuracy and increasing the odds of a headshot. Aiming while moving increases the size of the reticle and SYNTHETIK does a great job of emulating the difficulty of maintaining steady aim, especially with a recoil-jerking automatic rifle. And yes, even the occasional weapon jam is baked into the simulation.

A Multitude of Classes, Weapons, and Items

Steadily, you’ll learn how to approach opponents, taking actions like splitting groups into vulnerable individuals. Much like your own futuristic regeneration shielding, some foes will have restorative armor, compelling you approach with a full magazine and separate them from their flock. It’s at these moments SYNTHETIK delivers, with the game offering a delightful staccato pace to its fights. While stealth isn’t the game’s focus, it’s almost always better to scout out foes and prioritize different targets. 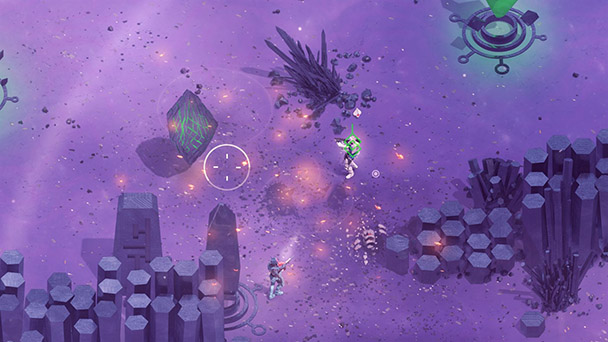 Respectable roguelikes work diligently to offset tedium. Enjoyable, that’s the case with SYNTHETIK. Not only do classes begin a run with different loadouts, abilities, and items, but they play quite divergently. While the shield-carrying Riot Guard moved at a lumbering pace, his armor and high-capacity weaponry permits players to tank through hectic situations. Meanwhile, the Raider’s double-dashing and ability regenerate shielding on the fly, push him into killing sprees. The game’s stat-heavy play means that each class has their own distinctive momentum, whether it’s methodical assaults with the Riot Gunner or volatile sprees with the Raider.

Variety is also found in the game’s collection of 98 base weapons, which manage to handle uniquely. Additionally, variant styles (mil-spec, overclocked, heavy, etc.) and different ammo types ensure you won’t get too comfortable with a single weapon. As such as I loved a missile launcher that delivered flaming splash damage, the low ammo capacity made a gun that fired chained lightning bolts too tempting. 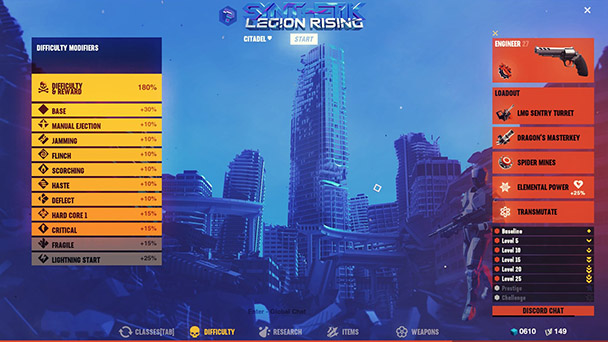 Yet, as engaging as SYNTHETIK is, the Xbox One port has a few faults. Arguably the biggest of the bunch, is a user interface that requires players to use the right analog stick to move a mouse cursor. Thankfully, won’t spend too much time in the menus, but every time you do, you’ll wish Flow Fire Games rebuild a more console-friendly interface. Another blemish is the aforementioned instance where enemy AI is positioned to surround the player. Part of this issue stems from the intelligence of opponents, who demonstrate a reasonable amount of skill. Give opponents a chance, and they’ll rush or flank you. Lastly, it can be difficult to gauge where you have a clear shot when you linger around corners.

Happily, these criticisms are only small imperfections on an otherwise distinguishing and downright addictive action game. Given the game’s nuanced take on twin-stick showdowns, I’d expect SYNTHETIK: Ultimate to gratifying a bit longer than many of its peers. And with the inclusion of options like play modifiers and an arena component, Flow Fire deserves compliment for extending depth and breadth.

SYNTHETIK: Ultimate was played on Xbox Series X
with review code provided by the publisher.

SYNTHETIK: Ultimate review
SYNTHETIK: Ultimate want you to unlearn some of the techniques that most twin-sticker shooters employ. This game is less about unrealistic circle-strafing, and quickly darting out of cover with a full magazine, guns blazing. At first glance, SYNTHETIK resembles just another roguelike, twin-stick shooter. With only a modicum of Terminator-esque storytelling to slow things down, the game quickly hurls humankind&rsquo;s last hope into its procedurally generated&hellip;

Summary : As a twin-sticker shooter with a surprising amount of strategy, SYNTHETIK: Ultimate shouldn’t be overlooked by fans of cerebral gunplay.