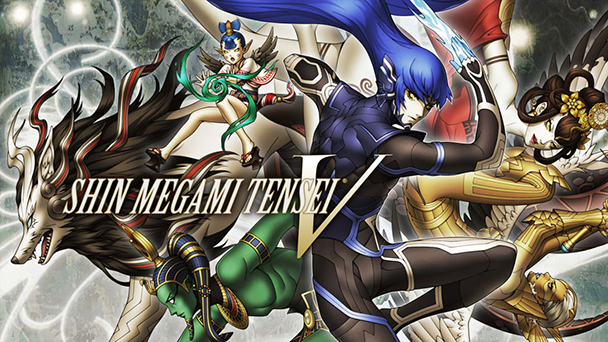 This Switch exclusive puts players in the middle of a holy war, where your action will determine the fate of the world. Atlus’ latest puts the weight of the world on your shoulders, but unlike the similarly named Greek god, you’ll enjoy every minute of it. 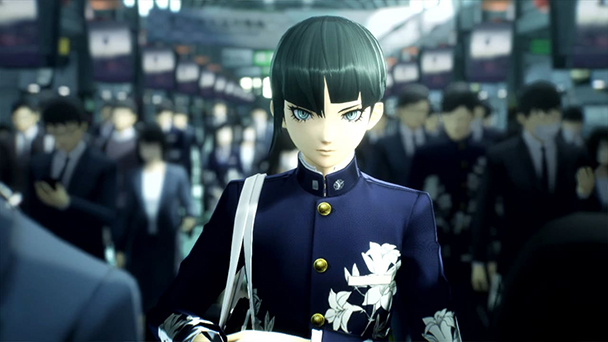 If you’ve playing through any of the previous entries, the first few hours of Shin Megami Tensei V will feel reassuring familiar. After naming your protagonist, SMT V escorts you through the mundane aspects of metropolitan life. Thousands of commuters make their journey through the Shinagawa train station, while cinematics depict students making their way to Jouin High School. But increasingly, peculiarities begin poking through the shroud of normalcy.

SMT V’s lead begins hearing reports of mysterious “shadows” attacking people arbitrarily, prompting an advisory for students to walk back to the dormitories in groups. While cutting through Shinagawa’s transit hub, your progress is halted, and an alarmed crowd starts murmuring about a brutal, bloody attack. Routine is completely shattered when an underpass shortcut collapses. When you awaken, Tokyo is completed devastated, and resembles an arid desert more than a densely populated prefecture. 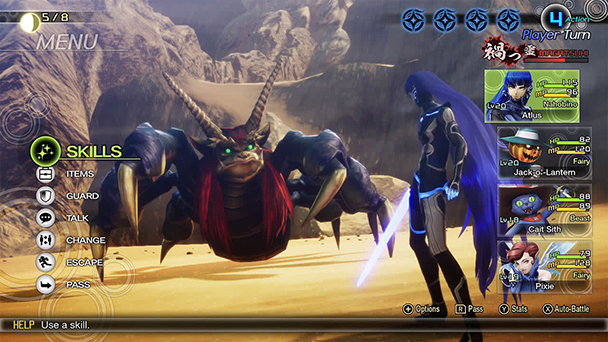 Just before being attacked by demonic creatures, a mysterious interloper comes to your aid. Introducing himself as Aogami, he joins forcing with you by fusing, resulting in the creation of a Nahobino. Beyond being a voice inside your head who serves as a chaperone through a wasteland known as “Da’at”, the merging also provides the ability to control and battle demons. Expectedly, the traditional tensions between Law and Chaos are pitted against each other. But pleasingly, the developers understand the expectations of returning players, and habitually turn them on their head.

But alas, things have advanced quite a bit from Shin Megami Tensei III: Nocturne’s post-apocalyptic Vortex World. The most immediately obvious difference is SMT V’s approach to exploration. Da’at provides far more navigational autonomy that most of its predecessors, with wide paths and far-flung draw distances. Instead of being forced to imagine destruction from interiors of dungeons and text-based descriptions, SMT V is able to visualize the devastation. You’ll venture through desolate valleys and climb vistas that provide a vantage point to assess the devastation. Exploration, with the assistance of a jump button, feels like an action game. 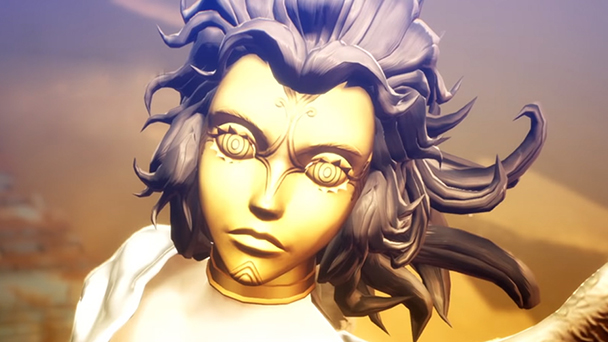 But for those who appreciate a tense dungeon crawl, don’t worry. The game still has a number of sites to scrutinize and scrap your way through. While these confiscate a bit of autonomy, these spaces have a bit more scripting, making them highlights on a tenaciously entertaining trek. These bits are so deftly devised they you might wish there were more of them. But even when you’re reconnoitering the overworld of Da’at, the game manages to shoehorn in a few navigational gimmicks, like drop-offs which function like one-way doors.

Returning MetaTen players will find that the tenets of battle are rooted in franchise tradition. Gratifyingly, the ‘Press Turn’ system returns, pushing players into exploiting the weaknesses of adversaries to earn extra turns. But enemies operate under the same rules, so if the Nahobino or his allies are hit by an elemental vulnerability, the tide of battle can be shifted. While subordinate foes can be defeated without much strategy, you’ll need to glean every available advantage when facing elevated enemies. 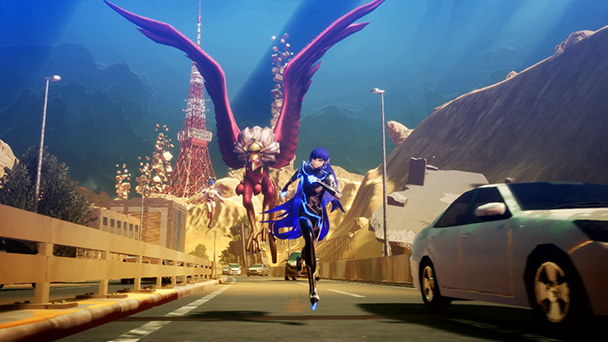 Replacing the Smirking system of SMT IV, a Magatsuhi gauge gradually fills during fights. Let the meter maximize, and character will be able to access race-specific skills that can dish out damage or buff the party. Since the gauge doesn’t reset after each encounter and doesn’t consume a turn, deploying a Magatsuhi skill at the right time can be a lifesaver. And given that even SMT V’s ‘casual’ difficulty is a bit of misnomer, you’ll want to keep this wildcard in your pocket.

Naturally, party management plays a key role in how fights play out. In keeping with tradition, you’ll be enlisting demons to fight alongside you. Unlike the recruitable characters of most role-playing games, SMT’s fiends are a varied sort. Some will test your bravery, other will make outrageous demands, and some will just be stubborn little shits who speak to you with contempt. But you’ll need to put up with their insults and extortion, as an extra pair of hands (or claws) is invaluable during combat. 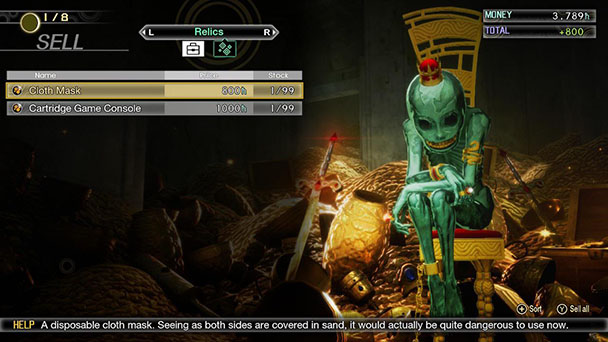 Much of the enjoyment in a SMT title is finding a demon that fits your playstyle. Early on, you might appreciate the healing that an angel can bring to battles or countering trait of a Rakshasa. Even when a creature doesn’t have a skill that fills a gap in your party, their Magatsuhi skill might prove invaluable. While you might play differently, my journey through SMT V felt like an exchange. While I brought my own play style, the game lured me into trying new approaches with its robust bestiary.

Further flexibility is rooted in SMT V’s Miracles system. Much like Shin Megami Tensei IV: Apocalypse’s Apps mechanic, completing specific tasks earns a scarce currency known as Glory. When spending Glory, you’re able to tweak some of the game’s parameters, allowing for perks like a larger roster count or even allowing demons to use items during battles. Each of these can be extremely beneficial and helps to temper SMT V’s wonderfully brutal difficulty. 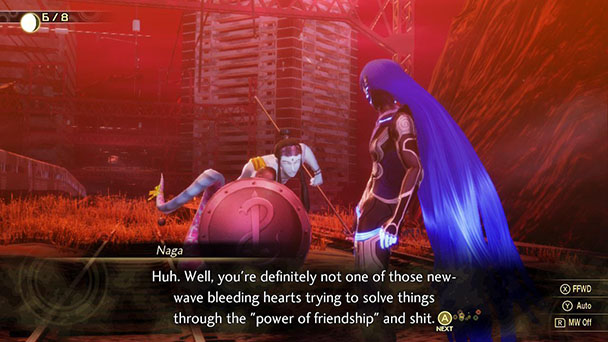 Alternatively, the Essence mechanic is new but entirely welcome addition. Beyond being able to fuse creatures, this system permits players to take demon DNA and assign it to other demons or even the lead character. As such, you can not only utilize the skills of other fiends, but transfer affinities, providing a plethora of possibilities for your party. While customization has always played a large role in the MegaTen franchise, SMT V expands on the potential in truly rewarding ways.

Inevitably, some will force a comparison between Shin Megami Tensei V and Atlus’ breakout hit, Persona 5. But there are far more differences than similarities here. Like its spin-off predecessors, Persona 5 delt with some important social issues but balanced the serious with some light-hearted character interaction. SMT V is an altogether different animal, where treachery, suffering, and death are ubiquitous. But that’s not to say the cast of secondaries are insipid. Here, characters react to the events around them in thought-provoking ways. But change and growth is mostly pre-written rather than a reaction to player choice. 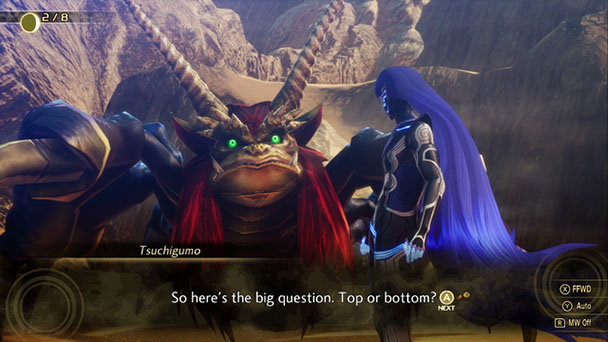 SMT V’s shift to the Unreal Engine is largely effective. Here, attack animations feel wonderfully robust, the overworld feels fuller, and demons and characters are rendered with an unprecedently levels of detail. But sticklers will notice that ambitions occasionally outmatch the hardware. While performance is routinely solid, the occasionally framerate drop and drop is resolution will be observed. What’s more, font sizing can be an issue, especially on the Switch Lite, where tiny icons that represent elemental weakness can cause eye strain.

Since its announcement four years ago, excitement has undoubtedly been mounting for the fifth mainline entry in the Shin Megami Tensei franchise. Skillfully, the title meets and occasionally exceeds expectations. Revisiting recurring themes while adding enough innovation to ensure this journey feels fresh, SMT V fulfills the aspiration of an uncompromised and original role-playing game that’s playable in portable form.

Shin Megami Tensei V review
This Switch exclusive puts players in the middle of a holy war, where your action will determine the fate of the world. Atlus&rsquo; latest puts the weight of the world on your shoulders, but unlike the similarly named Greek god, you&rsquo;ll enjoy every minute of it. If you&rsquo;ve playing through any of the previous entries, the first few hours of Shin Megami Tensei&hellip;