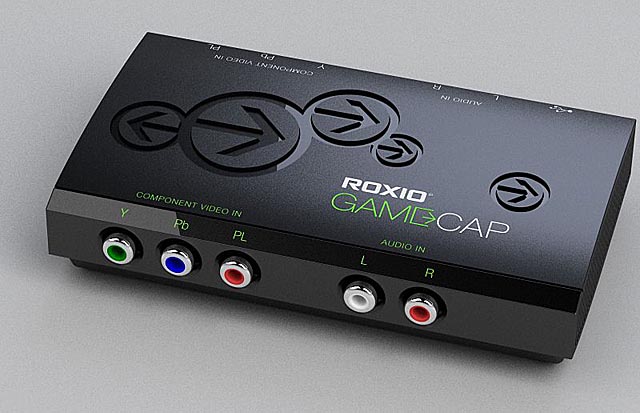 From exhibiting an extraordinary kill streak, creating a video review, or crafting their own machinima, there are several reasons why gamers might want to capture gameplay video. Typically, solutions are found in two extremes: prohibitively expensive  hardware used by industry professionals and budget devices unable to deliver high-definition output. With the release of the Roxio Game Capture bundle, the engineers at the Rovi Corporation hope to offer an affordable, middle-grade solution.

Setting up both the capture hardware and bundled software in largely intuitive. Users simply route a component cable from their Xbox or PlayStation 3 to the capture box, and then use another set of cables to connect the device to their television. Although Rovi’s documentation makes no mention of it, the unit is capable of capturing video from any machine with outputting component 480/576/720p or 1080i video- meaning PSP 2000-3000 and Wii footage can also be grabbed. Finally, a USB cable is connected between the peripheral and any open port PC port within the wire’s six-foot length. While the capture unit is externally powered  and therefore doesn’t have to be tethered to a nearby electric outlet it’s not exactly innocuous. After trying two units, I noticed a small but constant degradation in picture quality, whether the unit was gathering footage or not. A typically razor-sharp component picture lost its crisp edges on each of the six separate system/television permutations I tried, often reducing picture quality to composite-quality levels.

Fortunately, a minimal number of ills emerged on the software side. Although Rovi’s minimum PC requirements are a Intel Core 2 Duo Processor 1.8 GHz or an Athlon x2 64 2.0 GHz with at least 2GB, I was able to consistently grab video with a notebook with specs just beneath the recommended threshold. Of course, even on a powerful i5 3.3 GHz machine, the irregular visual or aural stutter would infrequently surface.  While the unit’s capturing ability maxes out at 480p, output quality was dependably solid, with most minute details acutely rendered.  The only caveat was small text could occasionally lose legibility when the video was downrezzed. With the ability to save content via a variety of different formats (AVI,DIXV,WMV), automatically capture for a preset duration, grab a screenshot, or tweak the incoming signal, the software offers adept functionality without becoming unnecessarily complex.

Once video has been seized by the capture application, a single button press imports the footage into VideoWave, the bundled editor. Recalling the capability of a full-priced video editor such as Cyberlink’s PowerDirector, the program delivers an impressive toolset. Users can add and manipulate photos, audio, titles, as well as create some impressive transitions. While the application allows for a simple captioned montage to be produced with a little effort, power users will discover the ability to keyframe visual effects or add a picture-in-picture window into VideoWave’s five track timeline. While videos can be automatically uploaded to social sharing site such as YouTube, Facebook, and WeGame, periodically a clip wouldn’t post without any explanation from the application. While the peripheral captures both in 4:3 and 16:9, posted videos often were plagued by small black bars at the top and bottom of the frame. I’m not sure if fault lay with Rovi or YouTube, but I hope a future software update could circumvent this mild nuisance, and eliminate the need for users to modify their videos. Despite these small admonishments, Rovi’s software is surprisingly powerful, rivaling the rendering speed and power of dedicated editing applications. 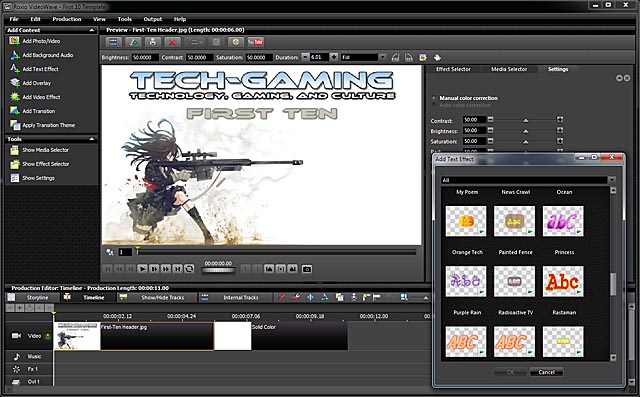 While the Roxio Game Capture hardware can’t compare to the high-def capabilities of a Hauppauge PVR, for the peripheral’s price (currently $68.99 at Amazon, with a $10 credit) the device offers a sensibly priced method to capture YouTube-quality footage. Elevated by a robust editing application, the bundle should be a primary consideration for any budget-minded user looking to share game video.