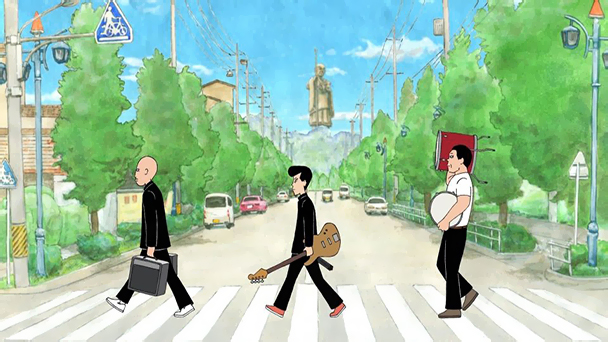 On-Gaku has long embodied the underdog spirit. After rejections from most of the major manga houses, Hiroyuki Ôhashi self-published Ongaku and Manga in 2005. A dramatized retelling of his experiences of playing at a musical festival, Ôhashi wrote much of it while at work. Unsurprisingly, the monotony of daily routine and the sense of liberation that art can provide play key roles in the storyline.

In 2012, the mangaka decided to turn the cult hit in an anime. The result, On-Gaku: Our Sound, took director Kenji Iwaisawa seven-and-a-half years to complete. With a limited amount of financing, Iwaisawa did the bulk of the animation himself, with assistance from a few inexperienced apprentices. Much like the source material, On-Gaku: Our Sound feels like the work of band of visionary outsiders. 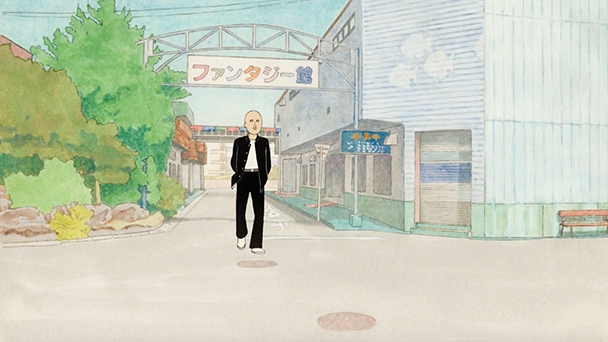 Initially, those accustomed to the elaborate output flaunted from large animation studios might find the impressionistic character art and measured pacing off-putting. While some of On-Gaku’s stylistic decisions stem from the modest budget of the seventy-one minute film, many are used to cultivate a personality that’s a sharp break from the homogeneity of mainstream entertainment.

Kenji (voiced by Shintarô Sakamoto), Asakura (voiced by Tateto Serizawa) and Ôta (voiced by Tomoya Maeno) are a trio of delinquents who attend Chiku High. Located in the shadow of Mt. Hiei, the city of Sakamoto feels quint, with few reprieves from the mundane. Besides tussling with a rival gang, the three students squander most of the day in one of the school’s abandoned rooms. Free time is spent tussling with rival squads from different schools or apathetically button mashing their way through an old fighting game. 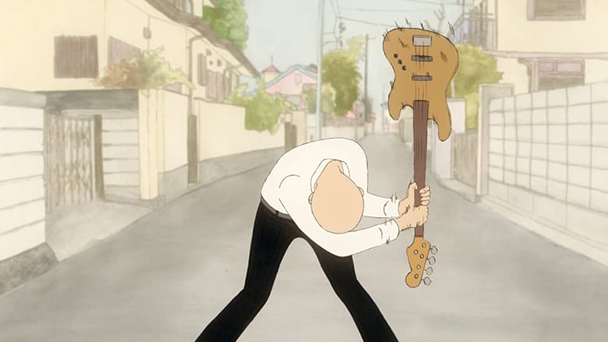 It’s here that’s On-Gaku makes a precarious first impression with long shots and stills that last long enough to make you wonder if your Blu-ray player just froze. But soon, Iwaisawa’s intent becomes clear, with the awkward pacing mirroring the tempo of small-time life. Much like the early films of Takeshi Kitano, On-Gaku’s long beats and emphasis on small details subvert traditional cinematic styling. While a street fight might be a focal point for many directors, Iwaisawa keeps the action off-screen, forcing us to peer at the unaffected Kenji and listen as an interloper to make sense of the brawl.

Just before the scrap starts, a passerby gives Kanji his bass guitar to safekeep. Arbitrarily, the character ends up keeping the instrument and tells his acquaintances that they should start a band. But neither Kenji nor his friends have played music since they were children. Using instruments pilfers from the school’s music room, the trio forms a band from two basses and a single snare drum. 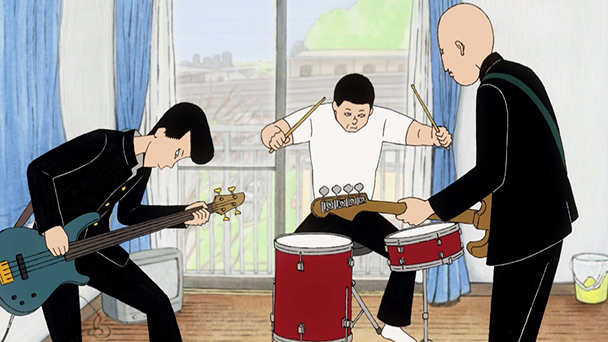 The result isn’t far from what you might anticipate, with the novices producing a dissonant drone to a metronome-like beat. But this is one of the rare moments that On-Gaku flirts with expectation. Far more often, the film is wonderfully capricious, with a worldview that’s filled with unpredictability. Offering any more synopsis would ruin the voyage, but suffice to say, On-Gaku has much to say about the nature of art.

The sense of humor is drier than the sidewalk on a sweltering afternoon. Yes, On-Gaku: Our Sound will make you smile, but the evades the kind of ‘laugh out loud’ gags that drive many features. Similarity, you might not develop an affinity for Kenji until the film’s final moments. His responses are deferred, persistently succinct, and often unpredictable. As such, the film channels the idiosyncrasies of people far better than the indulging character arcs that are ubiquitous in the medium. 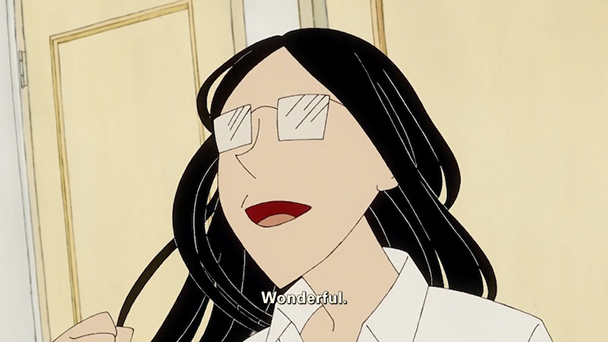 Wisely, Iwaisawa didn’t attempt to mimic the exactly look of Ôhashi’s manga. Instead, the director recreated the simplicity of source material’s abstract style, resulting is an adaptation that preserves the sense of ambiguity. With an oval head and eye intersecting arcs to represent eyes, Kanji can be hard to read. But it’s all deliberate, with the design capturing the detached bravado of a young delinquent. Instead, the film’s audio has the burden of exposition, with tracks from Tomohiko Banse, Wataru Sawabe, and Grandfunk as well as enchanting voice acting (from live action stars) filling in the details.

Arriving on home video on March 9th, On-Gaku: Our Sound had a short, pre-pandemic theatrical run to quality for The Oscars. But here’s the thing: the film is too punk for Hollywood admiration, especially in the field of animation. Habitually, the awards are little more than a platform to publicize the latest Disney/Pixar releases, and On-Gaku is far too clever and wonderfully subversive for mainstream viewers. 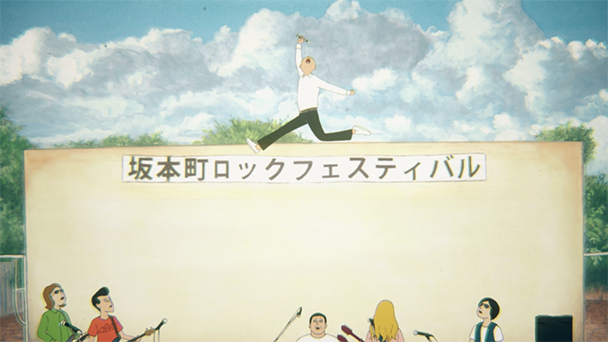 On-Gaku: Our Sound arrives of physical and digital home video on March 9th, 2021.
Physical media (Blu-ray+DVD) can be purchased here.