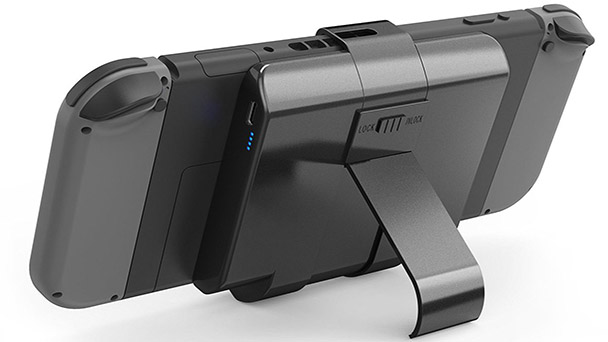 At least some of the Switch’s success can be attributed to its portability. Undock the device, and you’ll experience console-quality gameplay and graphics on the go. Well, at least for a little while. Some software that pushes the hardware to its limits can drain the Switch’s 4310mAh in less than three hours. So, if you’re hoping to play The Legend of Zelda: Breath of the Wild or Mario Kart 8 Deluxe on a long flight or train ride, you’ll undoubtedly need a power source to keep things going.

Ride Japan’s famous Shinkansen and you’ll find an AC outlet near the window of N700 cards. Likewise, most major airlines offer a place to recharge. But, you might need to be careful. On a recent Trans-pacific flight, the plug was beneath the seat. When a passenger in my row made a hasty retreat for the restroom, they stumbled, bending my power plug prongs in the process.

Sure, I could have reached into the dark recess under my seat to unplug it. Alternatively, I could have used a large power bank like the Anker PowerCore+ 26800. But even that would have had a dangling USB cable between the battery and Switch, possible presenting another hazard. A tidy solution can be found in the myCharge PowerGame Battery Expansion Pack. By creating a power bank that attaches directly to the system, the peripheral avoids some of messiness associated with other solutions. And while it’s a bit more expensive and has a lower capacity than some comparably priced li-ion batteries, the form factor is definitely convenient.

There’s often a lot of exaggeration when it comes to lithium-ion batteries, with manufacturers embellishing capacities and the number of times cells can be recharged. But the claims on the myCharge’s box are largely correct. Just like the housing asserted, the PowerGame was pre-charged. It took only about thirty-minutes to use the bundled USB-C cord to bring the unit to full capacity. Four blue LED lights display the amount of power left in the PowerGame with the quartet beaming brightly when the peripheral is fully juiced. Expectedly, you’ll have to unattach the unit when docking the Switch, and it should be noted that the PowerGame isn’t compatible with protections like Nyko’s Thin Case. 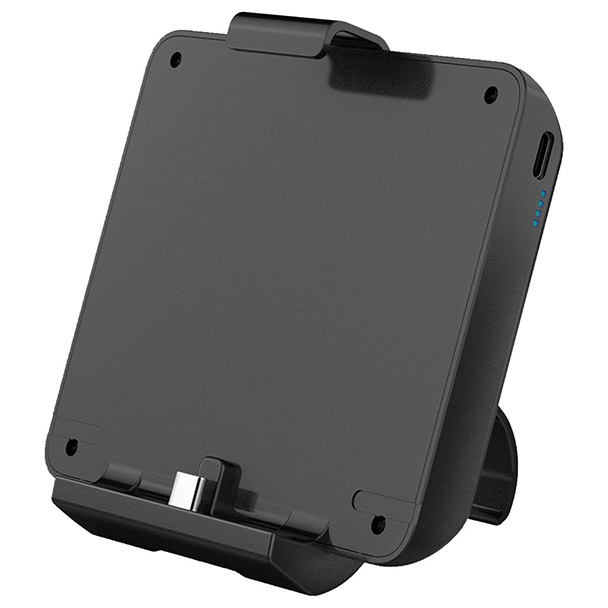 Attaching the PowerGame to the Switch takes about two second. First, you slide the device under the Switch, so the USB-C connector finds its way into system bottom port. Two bumps on each side of the plug help guide the device into position and secure the union. On top of the PowerGame is a clasp that folds over the top of the console, before sliding down to lock the battery into place. With the PowerGame wrapped around the Switch, the bond is solid. And no amount of movement loosened the battery’s grip. On the back of the battery in a kickstand that’s wider, longer, and a bit sturdier than the Switch’s own support. But unlike Nintendo’s buttress, the PowerGame’s doesn’t appear to be replaceable if it gets bent too far.

With the PowerGame attached to the Switch, you’ll definitely notice additional heft, since the device adds another 6.4 ounces to the system’s 10.48 ounce weight. Players with longer fingers might not like the way the back of the battery juts out, since it doesn’t allow digits to rest flatly on the back of the Switch anymore. I ended up curling my fingers around the raised back, which did induce a bit of minor cramping on longer sessions.

To test myCharge’s claim that the battery expands gaming experiences “up to 10 hours”, we ran a series of tests over a two-weak period, keeping an eye on handheld playtime. Breath of the Wild lasted 2 hours and 41 minutes on standard battery power (with maximum brightness, Wi-Fi enabled, and HD Rumble maximized) With the myCharge attached, we were able to attain 6 hours and 51 minutes, providing a significant boost but notable less than the “up to ten hour” claim on the box. But Blaster Master Zero, a game that undoubtedly less taxing on the system’s customized Tegra X1 GPU ran significant longer on the off-the-shelf Switch, netting 5 hours and 6 minutes of play. With the myCharge piggybacked, that figure escalated to 10 hours and 39 minutes, supporting the manufacturer’s assertions. Further testing showed that the PowerGame offered enough juice to charge a partially depleted Switch, although the process was quite slow.

For those seeking the most powerful charging solution, Anker’s PowerCore+ 26800 still reigns supreme, providing 20 hours of playtime albeit at a $120 premium. The myCharge PowerGame lasts long enough to make through the bulk on most international flights, at a significantly cheaper price. ($42.40 with a 15% off first-time purchase coupon from myCharge). If convenience is as important as longevity, then PowerGame proves worthwhile, if you’re seeking a simple, dedicated solution. For many, the flexibility of a power bank, which can charge multiple devices, will prove to be advantageous.

A review unit was provided by the manufacturer.

myCharge PowerGame Battery Expansion Pack review
At least some of the Switch&rsquo;s success can be attributed to its portability. Undock the device, and you&rsquo;ll experience console-quality gameplay and graphics on the go. Well, at least for a little while. Some software that pushes the hardware to its limits can drain the Switch&rsquo;s 4310mAh in less than three hours. So, if you&rsquo;re hoping to play The Legend of Zelda: Breath of the Wild or Mario Kart 8 Deluxe on a long flight or train ride, you&rsquo;ll undoubtedly need a power source to keep things going. Ride Japan&rsquo;s famous Shinkansen and you&rsquo;ll find an AC outlet near the&hellip;

Summary : Piggyback the myCharge PowerGame Battery Expansion Pack onto your Switch and you'll have gain enough playtime to make it through most trips.