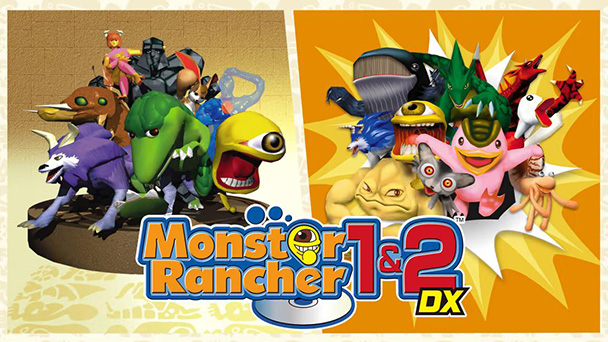 Although Monster Rancher 1 & 2 DX are sloppy ports of the mobile titles, there’s enjoyment in nurturing a combatant if you can look past the dated aesthetics. 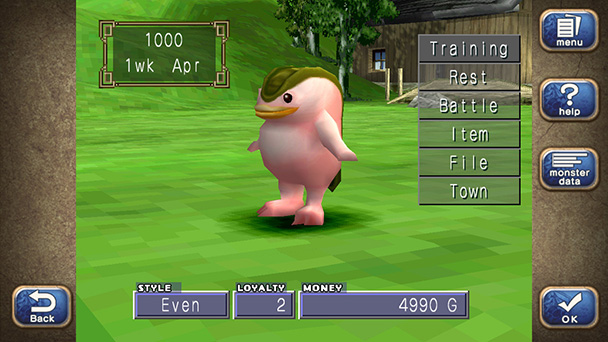 1997 was a long time ago. Many of today’s top 40 musical artists weren’t born yet. Compact Disks, the dominant music medium at the end of the last millennium, are now nearly extinct. The internet hadn’t enjoyed widespread popularity yet, forcing us to argue about games on Usenet. Mobile phones were a luxury item, accessible only to the rich. And while consoles of the era might be considered primitive by today’s standards, they allowed creative ideas to run wild.

The nineties can also be remembered as an age where the digital pet was popularized. From Tamagotchi, Sonic Adventure’s Chao gardens, series like Pokémon, Digimon, and even Shin Megami Tensei and Princess Maker games, our recreational hours were spent raising simulated beings. In 1997, Tecmo added their own adaptation, with Monster Rancher for the PlayStation focused on the gladiatorial rather than good, old naturing.

It also had an inspired hook: monsters were generated from the data found on CDs. Plop the “Mariah Carey Xmas” album in your PlayStation tray, and a pugnacious Santa would materialize. Sure, most of the monsters weren’t so closely connected to their source material. But going through a stack of CDs to see what emerges was nearly half the fun. It rivalled the suspense of opening a pack of collectable cards and finding out what was inside. 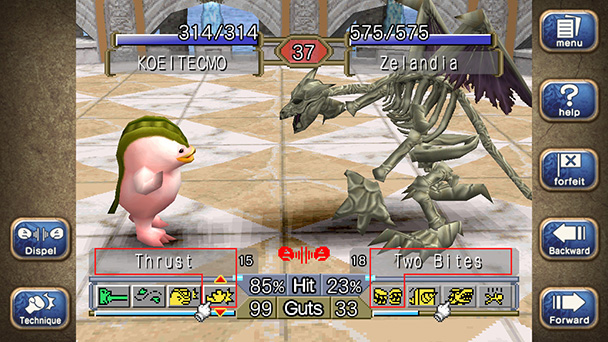 Sadly, I wonder if today’s gamers will see what kept us so enraptured when Monster Rancher debuted in 1997. Since CD drives are missing on the Nintendo Switch and many modern laptops, Koei Tecmo attempted to recreate the thrill of perusing your music selection for rare monsters. Now, there’s a database of CDs built into Monster Rancher and its 1999 sequel.

But it’s shoddily programmed and entering a lower-case ‘y’ into either the artist or song field cuts off the tail, making it look like a “v”. Why am I searching for “Bovz II Men”? I wondered aloud.  But that search, as well as typing in the name of many other popular ‘90s artists, won’t produce any results. While I don’t expect a retroactive catalog of every CD every released, some coarse experimentation showed that only about 60% of popular albums were included in Monster Rancher 1 and 2’s databases. Between that and getting denied a monster because of a low trainer rating, starting a creature coaching career can feel discouraging.

Another disappointment is found in the game’s control system, which demonstrates a no-frills port from the two-year old mobile adaptations. While the original version has an interface built around the original PlayStation Controller, here input is designed for a touchscreen. Buttons on the corner of the screen might work great for phones, but when using a mouse, it requires a lot of unnecessary movement. Using a controller is marginally better, but lacks on-screen button prompts and still asks players to ‘tap’ menu buttons. These kinds of blemishes are indicative of a slapdash port and left me wondering if Monster Rancher should have been left untouched. 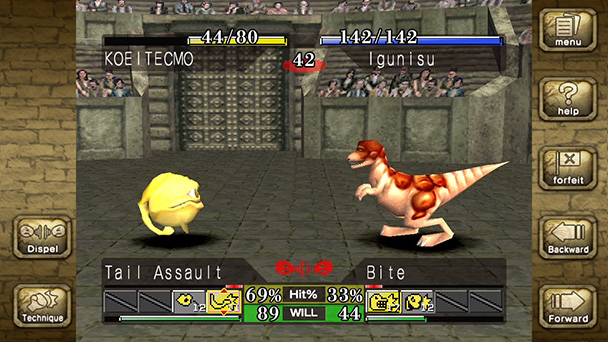 The Eye of the (Blue) Tiger

But venturing forward with a randomized monster, I was reminded of Temco’s distinctive direction. Instead of travelling through a world, trying to capture as many kinds of species of pocket monsters as possible, Monster Rancher and its sequel is about nurturing the perfect fighting machine. But here’s the stark difference: Tecmo’s world abandons many of the safeguards of the creature cultivation genre. Your monster will eventually die and is prone to leaving when they’re neglected or overworked. Like the best pet raising simulations, there are distressing repercussions for irresponsibility.

Instead of exploring a sprawling succession on interconnected towns, Monster Rancher’s sense of discovery comes from how to raise your budding combatant. The game encourages learning through trial and error as you follow a weekly schedule. Decisions like food, training, work, scolding, and whether to enroll for errantry (think of them as short-term monster boarding schools) all have repercussions, affecting your creature’s fatigue, temperament, as well as your income. Each is accompanied by an on-screen indicator of changes to the six key stats, as well as charming animations of success or failure.  Not only does Monster Rancher 2 have more monsters but also builds on the expressiveness of your pupils. Sure, the blocky models might seem primitive, but there’s a sublime satisfaction to raising a happy, little ass-kicker. 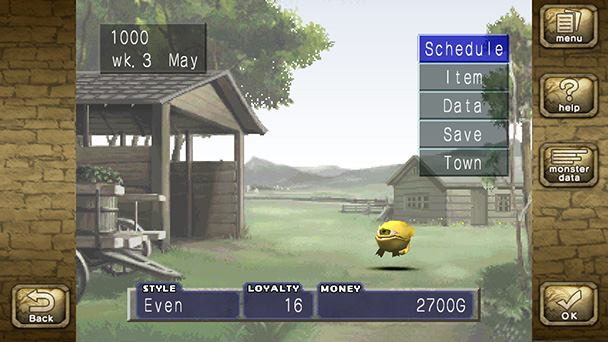 Pleasingly, combat is more engaging than the turn-based, four-skill affairs found in Pokémon and its clones. While you can let the CPU auto-battle for you, coaching your creature from the sidelines makes these battles far more engaging. Factors such a distance and a meter than constantly cycles through available commands are favored over elemental exploitation. As such, tournaments can be daunting at first. But like any respectable trainer, knowing the strengths and vulnerabilities of your competitor will provide a much-needed edge.

But managing your monster isn’t easy, especially given an average life-span of three years for your pupil. But here is where the DX games improve over the original releases, offering additional freeze slots, so you can cryogenically preserve more of your beloved pupils. Of course, breeding passes some of their best monster-DNA to their offspring, and it’s possible to produce some strong creatures if your commit yourself to Monster Rancher’s long game.

The other upside is that you’ll grow in rank, allowing you to generate new monsters. Monster Rancher 1 sees you as a member of the Fraternal International Monster Breeders’ Association (or “FIMBA”) while the sequel places you in the International Monster Association (“IMA”) camp. While they are on different continents, you’ll meet a common character or two, which helps with the franchise’s sparse context. For those eager to know more about the world, there are three seasons of the Monster Rancher anime available on Amazon Prime that expand on the groundwork laid out by the games. 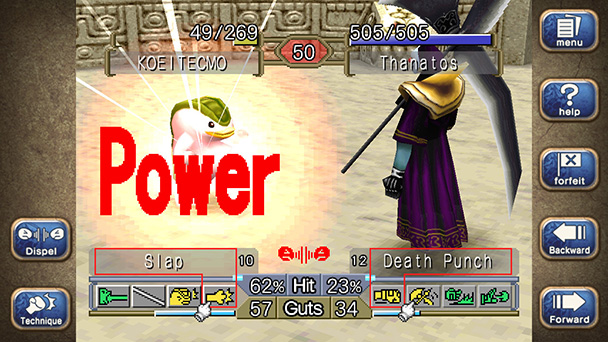 Monster Rancher is regularly compared to Pokémon, which is an inadequate analogy. Tecmo’s series is darker, with the threat of monster mortality and even mutiny frequently lingering. Training a robust fighter is a laborious task, with the game luring you into multi-generational monster breeding. As such, it’s shame that the re-releases of Monster Rancher 1 & 2 DX didn’t get the naturing that they deserve.

Monster Rancher 1 & 2 DX review
Although Monster Rancher 1 &amp; 2 DX are sloppy ports of the mobile titles, there&rsquo;s enjoyment in nurturing a combatant if you can look past the dated aesthetics. 1997 was a long time ago. Many of today&rsquo;s top 40 musical artists weren&rsquo;t born yet. Compact Disks, the dominant music medium at the end of the last millennium, are now nearly extinct. The internet hadn&rsquo;t enjoyed widespread popularity&hellip;

Summary : Nearly a quarter century on, the first two Monster Rancher titles remain compelling. That’s a testament to the imagination of the original games, rather than this disappointing, and all too obvious, mobile port.