With Arboria, we venture deep into a meticulously crafted grotto of repulsion in an effort to save our village. With Damsel, we play the role of an agile agent who is determined to eradicate corruption from a vampiric beverage manufacturing plant. Yes, with IndieGo #22, we’re exploring the shadowy alcoves of interactive entertainment. 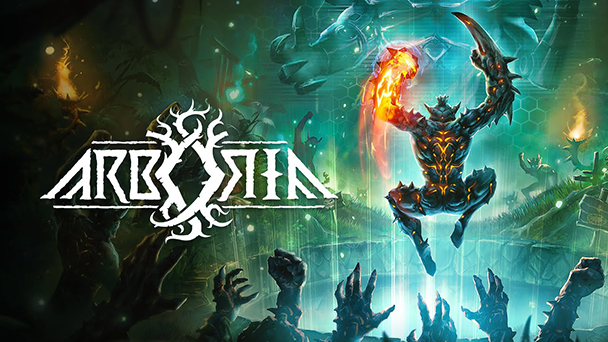 Arboria is one of the ugliest games I’ve ever seen. Oddly, that’s a complement rather than a criticism. A journey through the game’s procedurally generated environments makes the rectal exam opening sequence through Adam Sandler’s colon seem as picturesque as a ride at Disneyland. Although Polish developer Dreamplant’s title is in Early Access, it’s Unreal Engine-visual delivery outshines most finalized releases.

As a warrior fated with saving his tribe from extinction, you’ll tread through dimly lit labyrinths where walls are encrusted with barnacle-looking organisms, floors look like abandoned wasp nests, and there’s a ubiquitous undergrowth of oily florae that’s seems certain to give you a foot fungus. Undoubtedly, the art team drew on the most menacing elements in biology and added them all in the game, making the Arboria a museum of repulsion. And even trampling on seemingly innocuous flowers causes massive spikes to jut out of the ground. 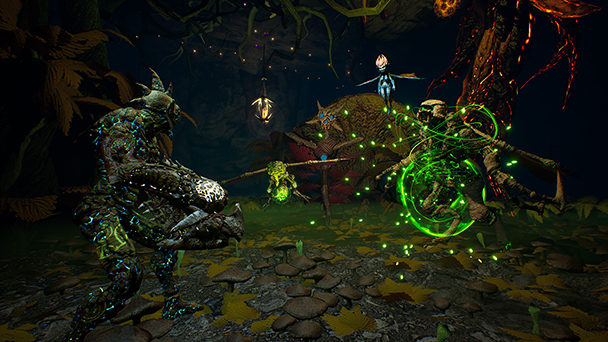 Being a rouge-like, a new protagonist takes up the mantle after the inevitable death of the previous one. Arboria provides a decent selection of fodder, with different stats and weaknesses, like one with poor eye sight or increased damage when you’re low on health. Either way, don’t expect any dash elven types in Arboria. Whoever you choose, you’ll be a monstrosity with scales, gills, or some kind of reptilian features. You’ll be accompanied by a green, corpulent fairy-like creature on your journey. She serves as a mule, carrying all the brilliant blue ‘veri’ that you mine from subterranean deposits. Parodically, she’ll puke her supply into a tube that transports the material topside.

Combat takes cues from Dark Souls, requiring players to contently read for enemy tells, dodge, and retaliate with a powerful, but deliberate attack. Play with a controller and shoulder buttons and triggers correspond to your right and left arms. The former deliver light and heavy swings scythes and axes, while the latter uses shields for a ranged attack or area-of-effect action. As a second-rate Souls hack, I appreciated Arboria’s less stringent difficulty, with 30 to 45-minute runs delivering a proper level of adversity. After each, you can either use veri to improve your skills/stats or donate them to the gods. Piousness helps improve the village back home, unlocking new augmentations, so you’ll have to balance the two causes. 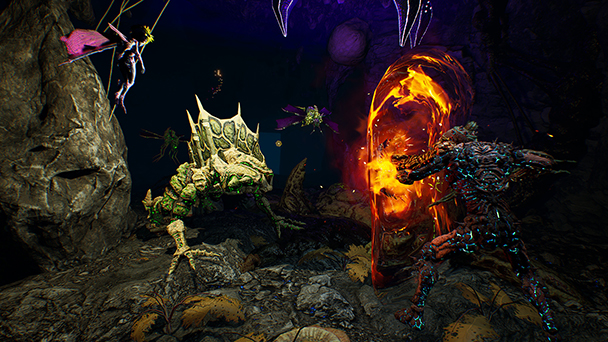 In its current state, Arboria is quite playable, although there’s a scarcity of material in some areas. While you’ll fight charging rock monsters and mutant frogs, most of the time you’ll battle wasps, which can get a bit monotonous. Sporadically, you’ll encounter trees that need healing, which seems like a worthwhile endeavor, except these undertakings supply the same kind of skirmishes as the rest of the game. Hopefully, will mend these minor issues, because is shaping up to be the action-based rogue-like that might finally pull me away from City of Brass.

Recommended for: Fans of procedurally generated action who don’t have the patience for studying Souls iframes. 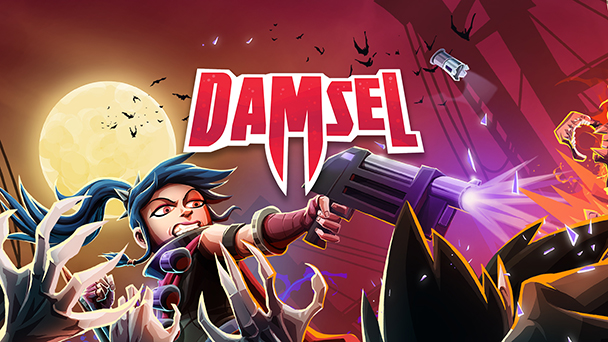 Action platformers often have rudimentary plotlines. But Damsel’s storyline, told across comic panels, is filled with a far more enjoyable intermingling of humans and vampires than anything Twilight scribe Stephenie Meyer has put to paper. Plus, Brisbane-based Screwtape Studios conveys a bit of playful suspicion for transnational conglomerates, which is always fun.

The game’s seemingly benign corporation produces a drink called Red Mist, which is supposed to satiate a vampire’s bloodlest, without the need for human cruelty. But when Department of Sanguinarian Affairs field agent Damsel receives a tip that the company might be conducting some shady business practices, she goes to investigate, shotgun in hand. The dialog between Damsel, her handler Swan, and tech guru Die-ode is consistently lively and probably good enough to warrant a jump across mediums. If that ever happens, you better keep it at least PG-13, Screwtape. 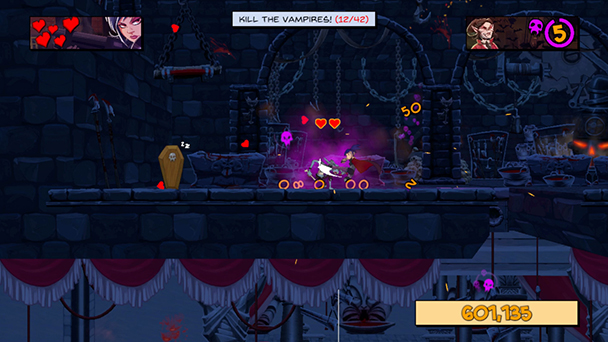 But that’s not to say, Damsel’s carnage ever transcends the cartoonish. The game’s protagonist is one of the most agile characters in the game, with abilities that include a double-jump and the ability to dash through the air. As an agent, she’s no slouch and through timed button presses, she’s able to release rope-tied hostages and defuse bombs in a few seconds. As one of the Department’s most capable, she’s held to high standards, and the killing of a single hostage or bomb blast immediately ends the stage. As such, it can get tricky when enemies and captives are adjacent.

Initially, vampires are pushovers, shambling across platforms and offering little resistance. But across the game’s succession of 75 stages, the difficulty gradually intensifies and you’ll find that adversaries that are more resilient, plentiful and aggressive. Variety comes in features like cameras that respawn opponents until they’re destroyed or traps that ensure speedrunners will memorize the layout each level. While you’ll be nailing early stages in your first time out, expect latter ones to require multiple retries. 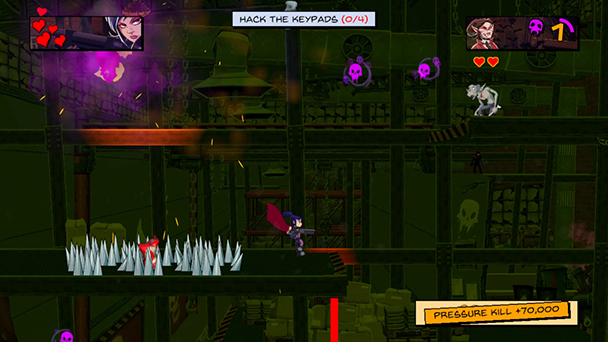 Beyond killing and rescuing, you’ll probably also want to engage in collecting by gathering the skull icons scattered across each stage and are found in the coffins that are laying about. These add to your multiplayer, potentially earning you a spot on the online leaderboards shown after every level. Here, skills separate the average from the excellent. If you’re able to dash through a chain of skulls, you’ll have a scoring advance over other players. The sole issue with the game is that things can become a visual cacophony. With point values tumble across the screen, fires blaze across platforms, and often, layers of enemies walking over hostages, verbalized profanities are inevitable. Hopefully, Screwtape keeps those in the cinematic adaptation.