Indiego! #1: Violet Cycle, Dead Ground, and The Void Rains Upon Her Heart

We pilot a mech through hostile voxels in Violet Cycle, battle waves of mutant bees in Dead Ground, and conquer with the power of love in The Void Rains Upon Her Heart. 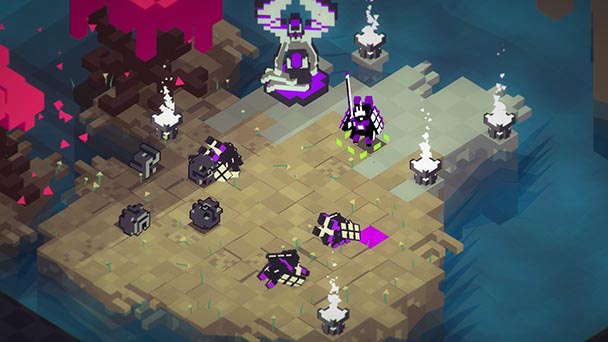 Violet Cycle is both strange and gratifyingly familiar. Deliberately, the game is taciturn, with statues giving away random fragments of its backstory across each of the campaign’s thirteen floors. Even then, some of the exposition remains encoded in alphanumerics, adding to the feeling on finding yourself in a bizarre, and largely antagonistic world. Although the game does explain the basics of its control scheme, figuring out the nuances of dashing, combat, and color-coded surface titles will require investing some time in the title. And while the game’s isometric, voxel-built environments are brightly hued and welcoming, reading enemy signals and even following the action can be a bit challenging.

Stick with it, and you’ll discover the abundance of influences in Violet Cycle. While it’s definitely an action title, recklessly attacking enemies is dangerous. Instead you’ll have to make amble use of your blocking and dashing maneuver, with the former required just to cross the numerous gaps in the game’s procedurally generated levels. One mechanic designed to deter players from spamming the attack button is your heat-meter. Many actions increase the temperature of your mech-like unit, which gradually pushes the protagonist toward a debilitating downtime.

Recommended for: players who like fast action, yet are fatigued by familiarity. 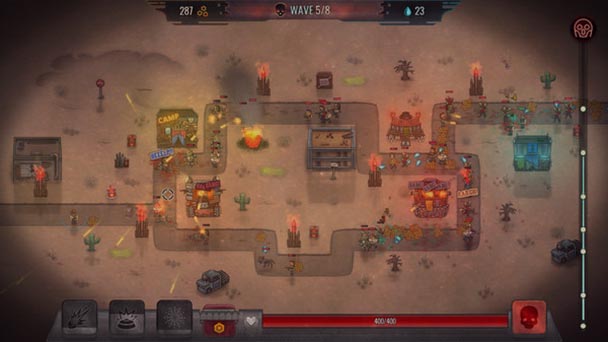 As much as I enjoy tower defense games, the genre has felt a bit stagnant over the last few years. Dead Ground builds on the core premise, where you’ll build militarized outposts using water collected in the post-apocalyptic context. Expectedly, these units are autonomous, and will do their best to stop a procession of zombies, mutant dogs, and giant bees from parading into your safe zone. But like PixelJunk Monsters, you’ll also have control over an on-screen protagonist who is just as capable as any tower and can use a variety of weapons to thin out the persistent cavalcade of creatures.

But there are also a number of Rogue-ish elements with create distinction for Dead Ground. Levels are procedurally generated, and while boss battles are always about depleting the heath of a formidable baddie, you’ll never know who you’ll confront. Likewise, playthroughs are randomized with each run offering different weapons, skills, and augments. Each day of gameplay is proceeded by a ‘choose your own adventure’ like scenario that can result in a penalty or perk. While the game’s current state is still a bit rough around the edges, with menus being rather cumbersome, there are certainly some solid design decisions that elevate Dead Ground.

Recommended for: gamers who don’t like the managerial approach to most tower defense games and want to get in on the action. 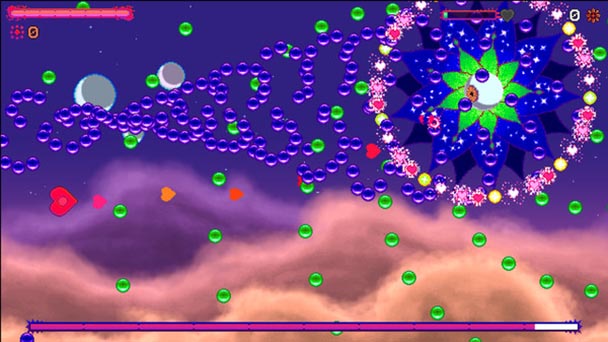 The Void Rains Upon Her Heart, Veyeral Games, $7.99

Like The Binding of Isaac, The Void Rains Upon Her Heart is built upon metaphor and sporadically tackles difficult subjects. The game opens as a solitary alien girl awakens in cave teeming with a collection of weird monsters. With her diminutive wings, she’s unable to confront the creatures, so she attempts to express love, thinking adoration will quell their hostilities. And while each is initially hostile, affection always wins, causing any creature to forego their aggression, and give the girl a perk that can be used to confront subsequent opponents.

Gameplay is based on a side-scrolling succession of boss fights, with the lead character represented by a heart that shoots a continual stream of sentiment bullets. Pleasingly, the sequence of bosses is randomized, with a select of fourteen different enemies, further supplemented by enemy having different types of attacks that vary with difficulty level. Beating these opponents rewards players with Isaac-like perks, which helps players contend against Heart’s mounting difficulty. While the game’s visuals are a bit simplistic, The Void Rains Upon Her Heart’s gratify bullet-hell based gameplay helps to compensate for any deficiencies.