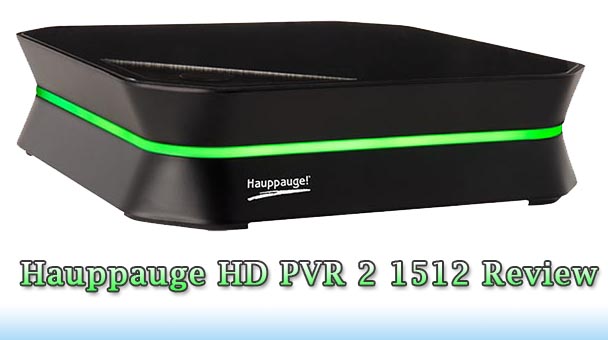 Not long ago, if you wanted to seize the output of a game console, the sole feasible option was an expensive and bulky professional-level video capture device. Thanks to the introduction of consumer-level equipment developed by firms such as Hauppage Computer Works and Elgato Systems, high-definition video can now be grabbed using affordable, diminutive devices. Last year, we reviewed Hauppage’s 1445 HD PVR, which proved to be a capable unit, with one notable shortcoming – the device didn’t have a HDMI port, which has become the de facto interface for high-definition consoles. The release of the HD PVR 2 1512 remedies this grievance, while contributing a handful of new features to streamline the capturing process.

A Copious Amount of Bundled Cables

Opening the PVR 2’s box reveals a wealth of individually wrapped components. The capture recorder itself bears a considerably smaller footprint than its predecessor. Aesthetically, the unit flaunts a more stylish design, with an eye-grabbing hour-glass shaped midsection which communicates recording conditions based of the color of a glowing band. While exhibiting the same secure build quality as the PVR, the successor also provides users with a triangular button atop the device, which is capable of starting and stopping the capture process. 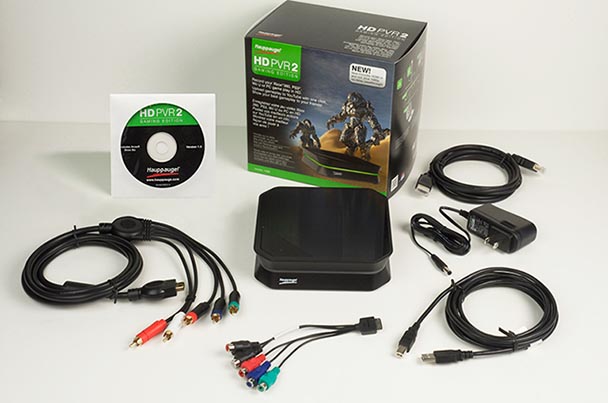 Along with the six-volt power supply, a nine-foot USB and six-foot HDMI cable, the HD PVR box also includes a set of brawny component cables as well as a connector which links them to the recorder’s proprietary video input. Rounding out the list of bundled items is an IR Blaster, which allows the recorder to issue commands to a cable/satellite box or AV receiver. Pleasingly, most of the PVR 2’s input and output ports provide a relaxed union- save for unit’s component input, which was a bit too taunt and without a trapezoidal connector, presented the possibility of being forced in upside down. Fortunately, the HD PVR 2’s instruction manual provides a bit of helpful advice (the word “push” on the connector should be facing downward). The unit’s one enigmatic omission is the lack of optical audio output, which would have been a welcome addition for owners of Surround Sound systems.

Adding the HD PVR 2 into a number of preexisting AV set-ups proved to be consistently uncomplicated. For HDMI-using Xbox 360 or Wii U owners, setup is as simple as plugging their existing cables into the recorder and connecting the unit to the television with the bundled HDMI wire. Since the PlayStation 3 utilizes HDCP (or High-bandwidth Digital Content Protection) to encrypt its outgoing HDMI signal, using component cables is the easiest method to grab video from Sony’s platform. Those insistent on obtaining the High-Definition Multimedia Interface and willing to venture into legally murky lands may want to research a HDCP stripper, which removes the encryption data from the PS3’s outgoing signal. Naturally, the PV 2 performed flawlessly with every component signal we threw at it, allowing the recording of broadcast television as well as Dreamcast, PS2, Wii, and even PSP 3000 output. 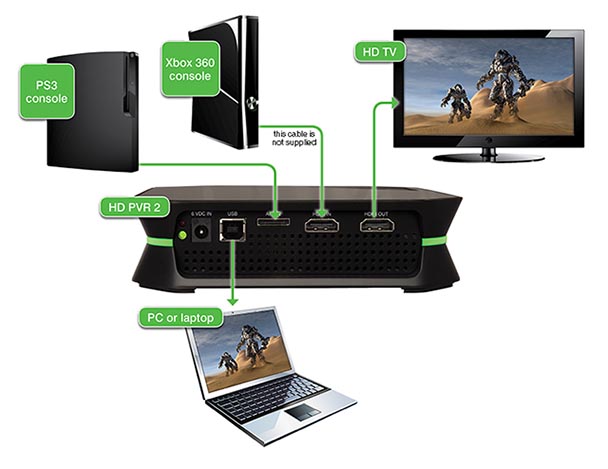 Installing both the PVR 2 driver and capture software is a painless affair, consisting of making sure the recording in connected, and clicking through the terms of agreements. Along with the return of ArcSoft’s functional, if sparse editing program, ShowBiz, HD PVR owners also receive WinTV v7, which permits the streaming of content to the desktop as well as Hauppauge StreamEez, allowing the convenient  streaming of content to broadcasting services Twitch.TV and Ustream. Each software program allows users to select either an HDMI or component input stream, allowing two consoles to be connected simultaneously. Strangely, the recorder lacks a method to manually toggle between these inputs, with the PVR 2 defaulting to the last used connection.

While signal degradation should be minimal in a digital environment, nitpickers might notice a negligible change to the luminescence of output. Although a consensus wasn’t found in the office, the majority of observers noticed that the most vibrant colors revealed a bit more pixilation around edges. Like most capture systems, the unit functions as a passthrough device, not requiring a connection to a PC to operate. However, power from the AC adaptor is a persistent necessity, even when not recording.

Utilizing ShowBiz (albeit version 3.5.41.83, a build from 2009) allows users to capture, edit, and produce montages. The program is functional, allowing the easy assembly of gameplay clips, titles, and text- while video can be directly uploaded to a YouTube account. Those seeking more flashy production values will want to invest in a standalone video editor such as CyberLink Power Director, Corel VideoStudio Pro or Adobe’s Premiere Elements. That said, users will keep ShowBiz on their hard drive for the app’s capturing capacities, which present user with a plethora of tunings.

Beyond adjusting video processing variable such as brightness, saturation, hue, and sharpness, three different output formats are available: M2TS, TS and MP4. Delving into the Format Setting option exposes additional preferences, permitting users to adjust audio and video encoding bitrates, as well as resolution and framerate downsampling. Why would someone want to deliberately reduce the fidelity or refresh rate of their recording? The simple answer is bandwidth; since YouTube’s upper threshold on videos is thirty frames per second, users can swap half their refresh rate for improved visual clarity. You see, the HD PVR 2 admirably captures slow moving objects, but once a plethora of polygons are being pushed around, artifacting can been perceived when operating in high resolution/60 hertz contexts.

That said, the Hauppauge HD PVR 2 performed commendably, especially then the users increase the encoding bitrate up from its default of 8 Kbps. The unit other concealed tweak is the ability to record in at a variable bit-rate, which offers an attractive balance between visual quality and file size. Conveniently, the Hauppauge hardware seems to do be most of the processing during video capture, exhibiting a minimal drain on CPU resources. The downside is that there’s a 3-4 second delay between events occurring on the television and the mediated broadcast upon a computer monitor.

One of the Best Capture Units Around, but Not an Essential Upgrade for Previous Hauppauge owners.

For users hoping to craft their own review, walkthroughs, or Let’s Play videos, The Hauppauge HD PVR 2 1512 is an exemplary solution. Not only is the recorder easy to setup, but offers a wide range of options to tailor the quality of capture. As such, budding content producers are encouraged to consider the PVR 2 in their video sharing strategies. For those who already own Hauppauge’s 1445 HD PVR, know that there aren’t enough substantial improvements to warrant an additional $150 investment.