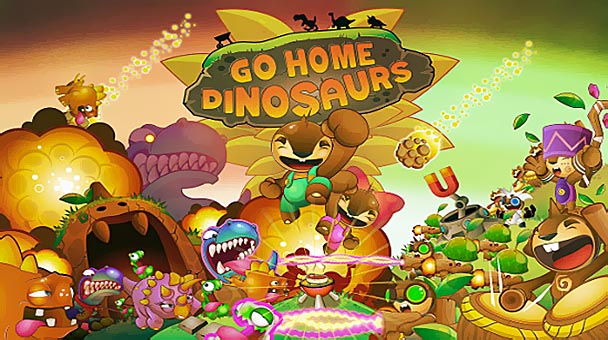 As a safeguard against stagnation, the tower defense genre has continually added new twists. Titles such as Toy Soldiers allowed players to take control of positioned weaponry, while Ratchet and Clank: Full Frontal Assault took this advancement a step further- providing a co-operative, action-based title played in the franchise’s traditional third-person perspective. Anomaly: Warzone Earth even turned the game type on its head, allowing players to act as the encroaching aggressors. 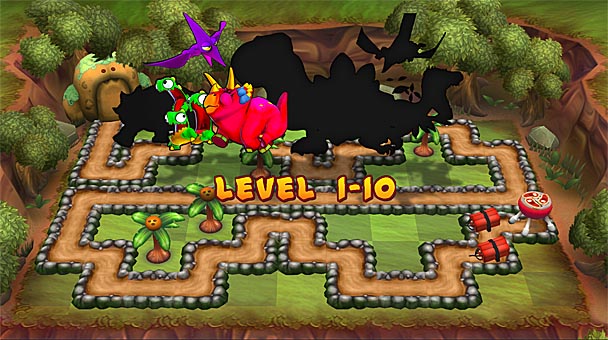 Often, the TD genre can be an insipid exercise, filled with stale sci-fi or fantasy tropes which offer a middling substitute for a storyline.  Make no mistake- Dinosaur’s narrative impetus isn’t much better, lifted only by a bit of spirited lunacy. The game’s context is articulated by a series of largely-static images, depicted a band of carnivorous gophers enjoying an innocuous BBQ in the park, when an assembly of Jurassic-era adversaries reveal menacing intent. To quell the threat, the rodents shirk their pacifistic pretense, taking arms against dinosaurs with rocket launchers and injurious laser beams, all to protect their top sirloin steaks.

The notion of these two factions engaged into conflict is just as absurd as flora fighting the undead. Fittingly, Go Home Dinosaurs adorable visuals pay homage to PopCap’s title, filling monitors with delightful drawn characters and eye-grabbing environmental details. Seeing the game’s cuddly-cute guardians emerging from hollowed out tree stumps or charging a Tesla coil by running on a hamster wheel is undeniably smile-enduring. Even more charming are the voice clips communicated by each character, delivering a plethora of pop-culture references, from autotuned DJ defenders to combatants which reference Full Metal Jacket and Aliens. Notably, Dinosaurs even pokes fun of its own madcap scientific inaccuracies. 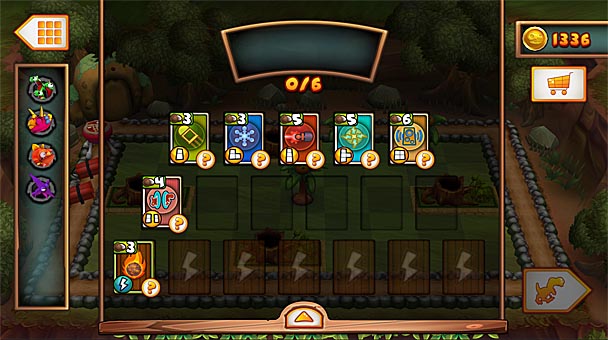 Beyond inviting aesthetics, the title’s other innovation is its handling of defense placement. Instead of having players create their own labyrinthine pathways of punishment or offered fixed positions for armaments, Dinosaurs delivers a grid-based battlefield. Like Plants Vs. Zombies, the commencement of each level allows players to determine their loadout, prompting a prudent overview of the imminent footpath and types of enemies to come. Unsurprisingly, compromises have to be made- as players have a limited number of defense slots.

Once the march of monstrosities begin, gamers place units, Tetris-style- ensuring that defenses don’t infringe on pathways or transcend the borders of the level.  Pleasingly, Go Home Dinosaurs uses translucent overlays to illustrate where units can fit in, as well as effect areas. Since some of the weaponry- like the stegosaurus-searing lasers are directional, a click of the right button rotates ordnance at ninety degree angles, allowing players to maximize the efficiency of their defenses. Any transitory gaps in a player’s protective network can be remedied by the game’s rock-pelting protagonist, who also burrows beneath the battlefield to collect the game’s unit-building currency. 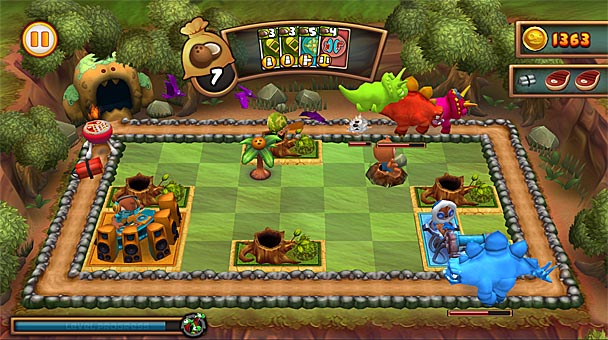 As such, Go Home Dinosaurs’ stages extend a puzzle-like vibe, involving careful planning and spotless execution. Unlike most TD games where players can resell their defensive units, Dinosaurs’ placements are permanent- requiring gamers to commit to every placement. Due to this design decision, pausing and restarting the current level is commonplace. Mercifully, the majority of the game’s stages are brief, so players won’t feel they’ve squandered their time. That said, the title’s challenge level can be woefully erratic. While most levels are breezy, sporadic spikes surface, sullying Dinosaurs’ easygoing vibe. Although it appears that the developers inserted an adaptable challenge level (multiple fails temper the difficultly, while subsequent successes bolster it) the game can seem a bit uneven at times.

Another blemish is the game’s store, which offers cosmetic modifications to the main character as well as the ability to purchase one-shot items. Ideally, players would be able to augment their arsenal with new persistent weapons, encouraging replay of the game’s levels. As it stands, once a stage is completed with a faultless ‘three-steak on the BBQ’ rating, the once incentive to revisit a round is the pursuit of a higher score. 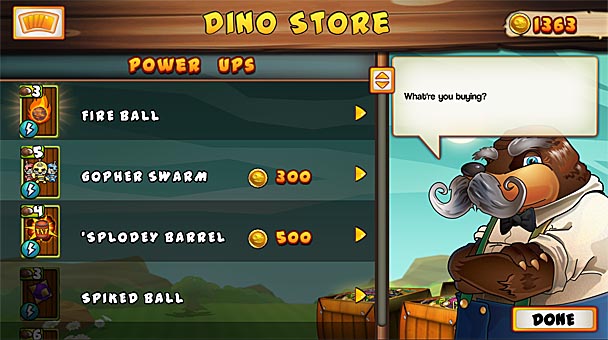 With a three to four-hour playtime, Go Home Dinosaurs’ ten dollar price is certainly equitable. Thanks to a new of clever advancements, the title’s take on the tower defense genre feels fresh, tendering a weekend of engaging entertainment. Had Fire Hose Game offered additional incentive for players, the developer could have turned a well-done game into something a bit more rare.

Previous: Podcast 12-7 Kinectphile Dysfunction
Next: New Releases for the Week of April 3rd-9th, 2013