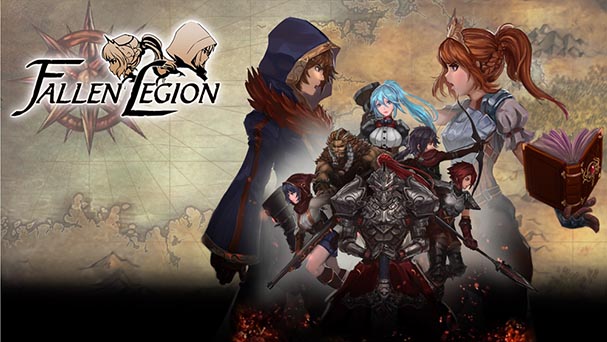 Like many otaku-Americans, my upbringing had a strong Japanese influence- with video games, manga, and tokusatsu occupying the bulk of my recreational hours amidst the 80’s and 90’s. Moments along the way pointed to a growing cultural convergence, with stores like Suncoast swelling their anime selection, while SEGA’s internal divisions bridged both side of the Pacific, with a partnership resulting in titles like Sonic the Hedgehog 2, Kid Chameleon, and Comix Zone. Right before the fall of the mighty Dreamcast, it appeared that Eastern and Western creative energies would be uniting, ushering in an era of paradisiac synergy.

But sadly, it never quite happened. 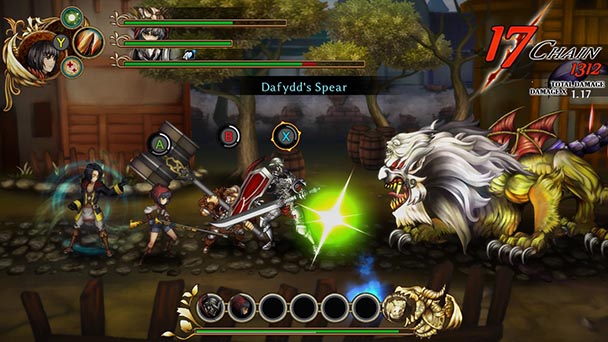 Instead, games from both territories doubled down on convention. The U.S. and Europe devoted their talents to first- and third-person shooters, sandbox-type experiences, and sports games, while Japan stuck with elaborate narratives and role-playing games. Sure, this assessment is reductionist and there are a handful of exceptions, but that’s largely how both industries operated. So, when Yummy Yummy Tummy Games announced their plans to unite the principals of the East and West, I was eager with anticipation.

The result was Fallen Legion, an ambitious role-playing game with a narrative split across the PlayStation 4 and PS Vita versions. Many of the game’s aspirations were commendable, with Western talent emulating the anime-borne aesthetics, rich storylines, and searing Daisuke Ishiwatari-styled guitar riffs. But woefully, in execution, Fallen Legion never quite gelled, resulting in a title that only the most patient of players will find laudable. Now, PC owners are privy to Fall Legion+, a compendium that bundles both games- but doesn’t do much to quell the game’s larger transgressions. 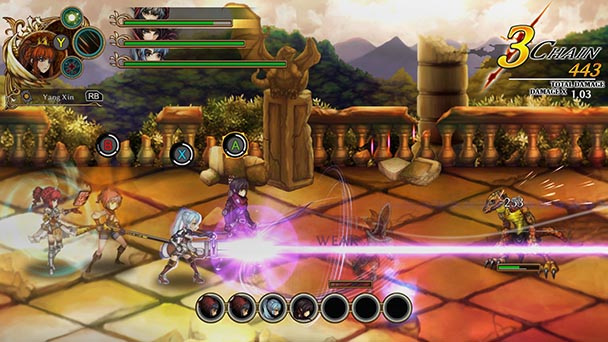 Certainly, the game’s context is rich with fairy tale-like promise. When the king of Fenumia dies, control of the realm falls into the hands of his daughter Cecille. Woefully, the empire is in precarious state, with appointed leaders each scheming for power, and the threat of rebellion pervasive.  On the upside, the late king bestowed a sentient grimoire and the princesses has the ability to summon a trio of ghostly warriors to do her dirty work, lending an iota of hope that the young royal can restore order to the kingdom.

And while a monarchy on the brink of collapse like a fertile framework, Fallen Legion often squanders its potential. For Sins of an Empire, players play as Cecille, while for Flames of Rebellion, you’ll see the world through the eye of Legatus Laendur, a tactician conspiring against the empire. Although there could have been a fascinating Rashomon-like experience where perspectives converge and juxtapose, Legion’s plot feels undercooked, largely lacking the poignant story beats that are customary for many role-playing games. At least some of this problem stems from Legion’s characters. While the Faustian deal struck between Cecille and the grimoire has its moments and Legatus certainly offers some interesting lines, everyone else is a bit one-dimensional. 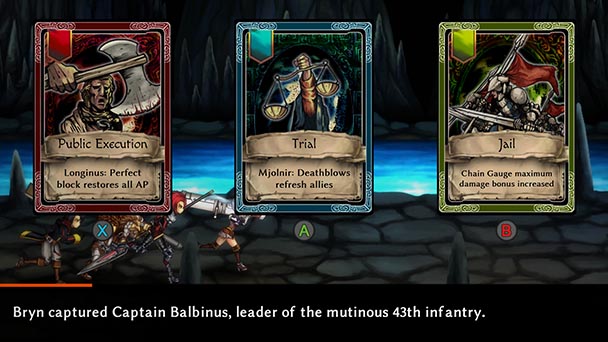 Evidence of this is found during the ethical quandaries that are a core component of the game. Periodically, players are given a trio of options, such as when a subordinate ruler attacks a village. Although Fallen Legion+ does demonstrate repercussion for your decisions, with a NPC possibly admonishing your actions or a side quest opening up, direction in these situations is often driven by the perk which accompanies each selection. All too often, Legion urges you to disregard virtue, opting for an augmentation that can even the odds during an imminent boss fight. While the concept of contrasting mortal decency against a benefit for battle could have been interesting, the game’s writing doesn’t offer enough scornful admonishment. As such, it’s far too easy to fall for the incentive.

Much like the game’s narrative, battles demonstrate potential, extending a system that feels distinctive and could have easily been quite fun. Essentially, the face buttons on your controller or portable correspond to the actions of a quartet of adventurers, with confrontation presented on a two-dimensional ally. As long as each party member has at least one action point, they can attack, launching say a sword or arrow attack at enemies. Unsurprisingly, you’re able to chain together different strikes and even trigger some specials. You’re also able to utilize the powers of the main character, with Cecille casting injurious spells, healing allies, or even resurrecting foes- if she has enough action points. Solidifying the system is a guard command that can shield your team from incoming assaults. 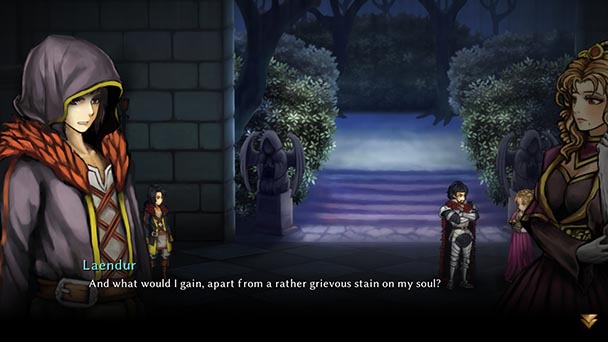 And while it’s a solid system in theory, combat stumbles in execution. Fallen’s previous releases inexplicably delayed the raising of your shield but a half-second, producing a bit of frustration. With this iteration, triggering your defense feels a hair faster, which improves things considerably. However, that doesn’t make battles a pushover. While it’s easy to watch for enemy telegraphs when there’s a single opponent, when there are multiple adversaries, getting that opening can be tough. Yummy Yummy Tummy seems to know this, and as such you’ll be relying on healing and resurrection heavily, which can turn things into a war of attrition. Another issue is the shortage of explanation. While Legion imparts the bare essentially, players are expected to learn the majority of nuances for themselves. The game neglect mentioning blocking early on, potentially pushing players into an early succession of game over scenarios.

There are other mechanics that are similarly underdeveloped, like a leveling system that’s less than forthright. Yet, given the number of missteps Fallen Legion+ makes, it’s difficult to write the game off completely. For one, the game’s artwork is commendable. Obviously inspired by George Kamitani’s sumptuous sprite-work in Grim Grimoire, Odin Sphere, and Dragon’s Crown, the title’s characters are appealing, both in portrait form and when playable. Locales invoke a mythical European setting, offering a variety of backdrops for battle. Sonically, the game employs some well-known Western voice-actors, but their contributions are all too limited, with long passages of unspoken text driving the dialog and exposition. 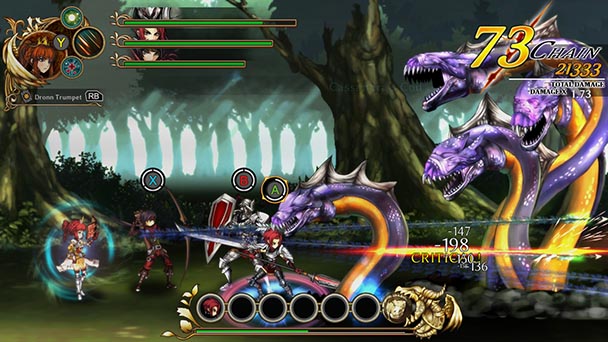 Fallen Legion’s journey to PC is a bit of a mixed affair. On the upside, the game currently scales up to 1080p, showcasing the game’s laudable art, and defaulting to a fullscreen. Yet, essential elements like an option to quit to the main menu or even a settings screen are inexplicably absent. Running on the Unity engine, the title typically extends a fluid framerate on GPU-powered systems, but isn’t except from the occasional crash.

Fallen Legion+ is an ambitious offering; perhaps it might have been a bit too much for a fledgling upstart like Yummy Yummy Tummy to handle. Conceptually, the game is irrefutably solid, with the team emulating many of the essentials of a Japanese action role-playing game. But in execution, Fallen is a different story, tragically missing several of its lofty ambitions. That said, if the developers can apply a few patches, this compilation might warrant consideration, particularly for its assemblage of content.

Fallen Legion+ was played on PC with
review code provided by the publisher.

Fallen Legion+
Platform: PC, previously on PlayStation 4, PS Vita
Developer: Yummy Yummy Tummy, Mintsphere
Publisher: Yummy Yummy Tummy
Release date: January 5th, 2018
Price: $29.99 via Steam
Fallen Legion+ review
Like many otaku-Americans, my upbringing had a strong Japanese influence- with video games, manga, and tokusatsu occupying the bulk of my recreational hours amidst the 80&rsquo;s and 90&rsquo;s. Moments along the way pointed to a growing cultural convergence, with stores like Suncoast swelling their anime selection, while SEGA&rsquo;s internal divisions bridged both side of the Pacific, with a partnership resulting in titles like Sonic the Hedgehog 2, Kid Chameleon, and Comix Zone. Right before the fall of the mighty Dreamcast, it appeared that Eastern and Western creative energies would be uniting, ushering in an era of paradisiac synergy. But sadly,&hellip;

Summary : Although Fallen Legion aims to recreate what makes Eastern games so enjoyable, a number of small design issues prohibit the game from reaching its full potential.