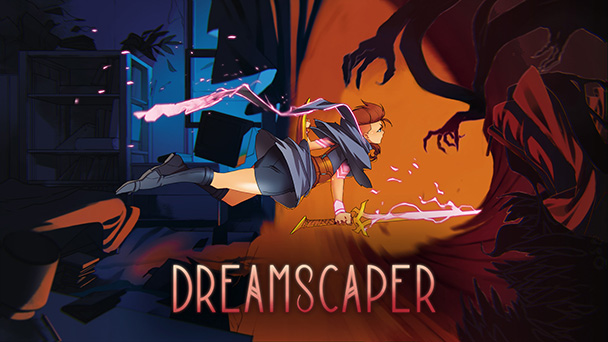 Roguelikes often favor action over exposition. That’s not the case with Dreamscaper, which offers contemplative storytelling alongside absorbing skirmishes. 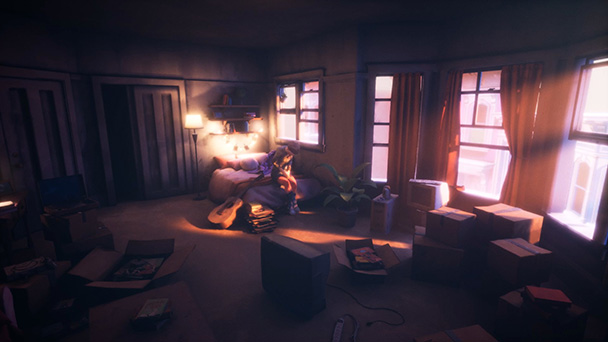 Dreamscaper reminds us that some of the biggest challenges we face are internal, rather than external.  Players assume the role of Cassidy, a young woman who moves from the quint town of Backhill to the city of Redhaven. With family dysfunction, personal tragedy, and the pressure of building a new life all echoing in her subconscious, Cassidy’s dreams frequently revisit her memories as well as manifestations of her current struggles.

These episodes of nocturnal brain activity form the basis of Dreamscaper’s gameplay. Each night, Cassidy finds herself inside surrealistic interpretations of her thoughts. Backdrops incorporate otherworldly elements like misshapen Victorian manors, eerily vacant public avenues, and waterfalls that spill into oblivion, making for a fascinating visual journey. Functionally, these realms aren’t far removed from the interconnected rooms of many roguelikes and an on-screen mini-map prohibits players from ever getting lost. 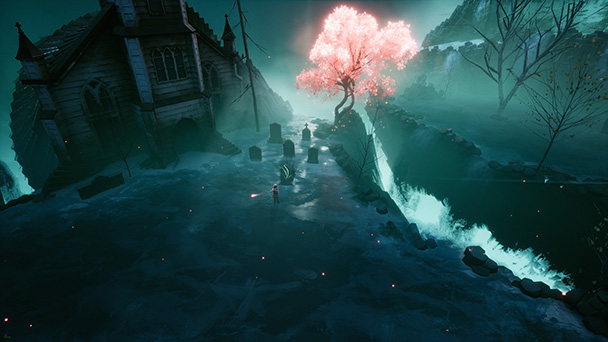 Pleasingly, the trio of developers at Afterburner Studios have ensured the action is consistently engaging. The game’s tutorial shows Cassidy playing a game in her new apartment, so it’s not surprising that her loadout is culled from a variety of action titles. She’ll start the game with the Super Slugger, an aluminum bat that emits a gratifying ‘thonk’ every time her she strikes an enemy. But there are also weapons like a katanas, blunt axe, broadswords, boxing gloves and brass knuckles to ensure variety.   Timing plays a key role in Dreamscaper, encouraging players to dish out precisely-times combos for extra damage.

She has access to a multitude of ranged weapons as well. While bows, firecrackers, frisbees pay homage to traditional game weaponry, her dreams also incorporate metaphysical abilities like telekinesis and a dazzling discharge of lightning dubbed the “Voltaic Ray”. Expectedly, ranged abilities resist overuse by being tied to a meter that gradually refills after defeating enemies. 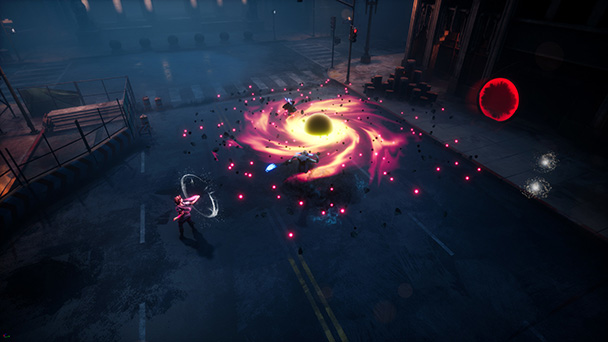 Cassidy also has up to two Lucid Abilities, which act like magical attacks during her dream runs. These are especially useful when surrounded by foes, endowing the protagonist with specials like an icy area-of-effect attack or the ability to slow down time with the Dream Rush. Like many other constituents of the game, these feel both ‘game-like’ but also otherworldly enough to be a part of a dream.

Defensively, Cassidy can dodge as well as parry and block with a shield. To keep things interesting, you’ll occasionally have to locate keys to unlock gated accessway or use bombs to blow up blocked paths. Or you can save the bombs to use against adversaries; there’s a modest amount of freedom in how you proceed. Although the game’s action is polished, combat doesn’t remarkably different from a multitude of other roguelikes, which might concern some players. 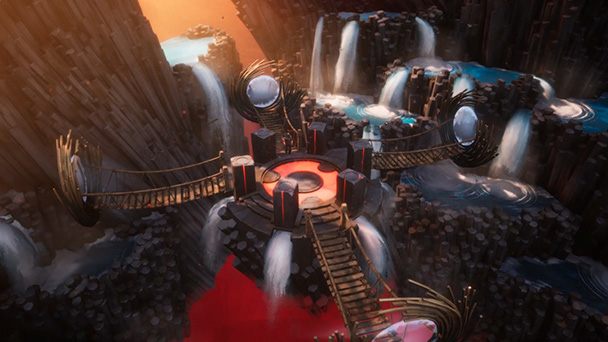 Pleasingly, fighting subordinate foes persistently feels fair. Between the way adversaries telegraph their attacks, Cassidy’s arsenal of abilities, and the game’s ability to scale the level of challenge frustration is infrequent. There’s even an elemental system is play which players can use to exploit weaknesses through the use of fire, ice, lightning, and water. What’s most impressive is that the game doesn’t deliver the typical ro-sham-bo associations. Experiment, and you might uncover the ability to harness curative capabilities.

Bosses represent Cassidy’s anxieties, evidenced by named like “Regret”, “Isolation”, and “Fear”. They’re suitably phantastic as well, resembling plum-colored sharks with brilliant green tails, or tentacled monstrosities with spikes jutting from their back. Mercifully, once you’re beaten a boss, you’re not forced to confront them across subsequent runs. Sure, you’ll forfeit the dividends, but you’ll save yourself some grief if you’re making your way through a game’s succession of six biomes. 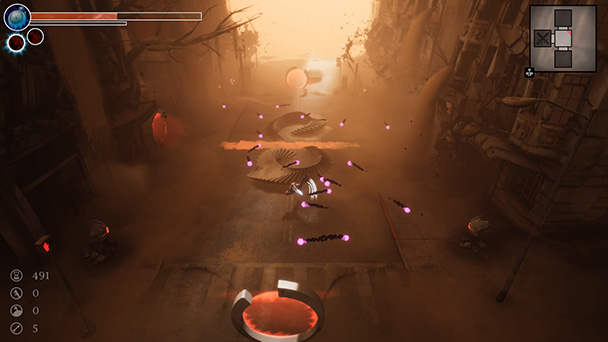 Spend Days Preparing for Your Dreams

During the day, Cassidy can visit different locations around Redhaven. These activities can feed into the game’s progression system. One of the most rewarding action involves using materials acquired during runt to craft items that can be gifted to the local townsfolk. Here, your relationship will grow, resulting in cutscenes that deliver a bit of backstory, expanding the game’s expositional elements. At a certain point, you can even earn passives bonuses that earn can be used in subsequent runs.

Additional perks can be earned through actions like mediation, sketching, and daydreaming. Ingeniously, these all fit seamlessly into the game’s theme. Mediation bolsters Cassidy’s health and augments her Lucid Abilities. Sketching exercises the mind, bringing the possibility of new weapons into her dreams. Finally, daydreaming expands the score of the title, adding challenge rooms and puzzles that will test Cassidy’s cognitive abilities. 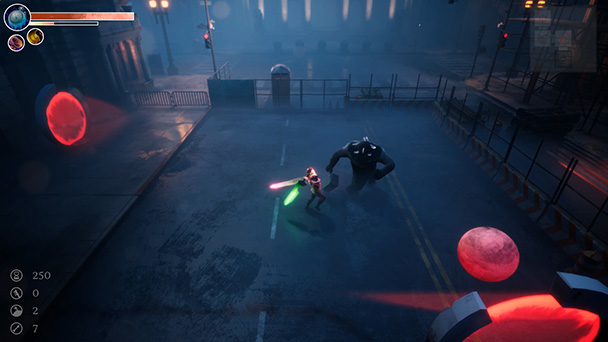 Difficulty Levels for All Kinds of Masochists

Dreamscape’s first biome feels like training for the latter five, which escalate quite sharply in challenge. Fortunately, the game provides a few ways to adjust the difficulty. Lucid Mode provides a bit of permanency and leniency, increasing Cassidy’s stats after she’s defeated in a run. Alternatively, players can tweak the settings in the game’s Dream Intensity menu, increasing the level of adversity for regular enemies, bosses, floor, and even the amount of damage you’ll take. Fortunately, the increased risk is matched by larger dividends.

Aesthetically, Dreamscaper makes some shrewd design choices. The modest poly counts for characters permits the game to be run on older rigs as well as the Nintendo Switch. Cassidy and the rest of the game’s cast don’t have rendered faces, which both adds to the dreamlike feel and makes identification with the character a bit easier. Praise should be given to Dale North’s evocative score, which underscores both the plaintive moments as well as the tense showdowns quite competently.

While Dreamscaper’s battles are undeniably solid, it’s the game’s subtle qualities that will win your affections. Unlike most action games, it would be difficult to not emphasize with the Cassidy. Her successes when socializing feel every bit as rewarding as defeating bosses, which is tragically infrequent in gaming.

Dreamscaper was played on PC with review code provided by the publisher.

Dreamscaper review
Roguelikes often favor action over exposition. That&rsquo;s not the case with Dreamscaper, which offers contemplative storytelling alongside absorbing skirmishes. Dreamscaper reminds us that some of the biggest challenges we face are internal, rather than external.&nbsp; Players assume the role of Cassidy, a young woman who moves from the quint town of Backhill to the city of Redhaven. With family dysfunction, personal tragedy, and&hellip;

Summary : Dreamscaper demonstrates distinction from its roguelike peers with characterization worth caring about. While the action isn’t quite as unique, it’s polished and engrossing.