Doodspeak: Q & A with NIS America 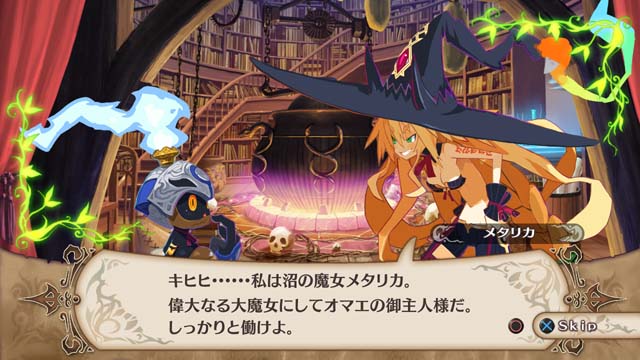 The Witch and the Hundred Knights

Last March, NIS America held its annual Spring Premiere, showcasing a trio of titles that the prolific publisher is bringing stateside. Recently, we were able to sit down with the company’s marketing coordinator and localization editor, to further explore these forthcoming games.

Tech-Gaming: Before getting to the titles announced at the Spring Premiere, can we talk about Atelier Meruru: The Apprentice of Arland, which is the third and final game in the series. Having helped Rorona and Totori transcend from bumbling beginner to advanced alchemist, I understand Meruru adds a development system?

Phoenix (Localization Editor): The overall goal of the game is to develop and advance Meruru’s blossoming kingdom of Arls. Engaging in alchemy, battle, and conversation are all important elements of reaching your goal. In addition, Meruru must also develop the land directly by restoring old buildings, creating new roads, or building new facilities for the people of Arls. All of these activities will change the landscape of the game itself, and allow for another way to achieve the game’s goals and follow Meruru’s story.

T-G: Are these changes to the game world more pre-determined or open-ended?

T-G: Atelier Totori was a little more lax in its time management requirements. Can we expect the same from The Apprentice of Arland?

Phoenix: Absolutely. The game still retains a time management aspect, and every decision you make will cost a certain amount of time. But when you are given a goal in this game (e.g. increase your population) it can be achieved in a variety of ways. So you’re not tied down to doing specific things by specific dates. Rather, you’re given a general goal and timeframe, and it’s up to you to decide the best way to achieve it. 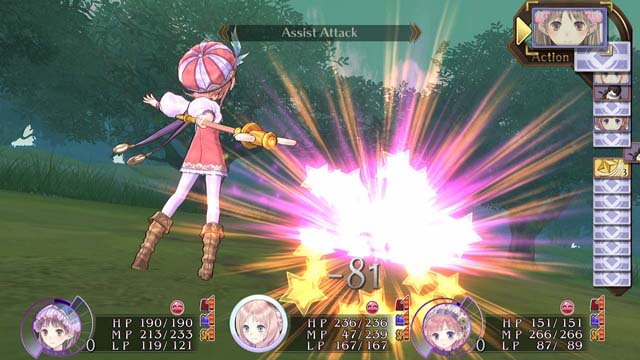 Atelier Meruru: The Apprentice of Arland

T-G: We here big fans of both ClaDun games, and Legasista looks like a spiritual successor. What are some of the similarities and differences?

Phoenix: Just like ClaDun, the core gameplay in Legasista comes from exploring dungeons in an action RGP setting. Just like before, you’ll be creating a team of warriors before heading in to face off against a variety of monsters and pitfalls, and gathering up loot all along the way. Legasista also retains the expansive customization features of the ClaDun games, allowing you to create custom characters, weapons, and personalities. With Legasista, you’ll also be able to share your creations with friends on PSN. And of course the random dungeon system is still in place. In addition, the battle system has seen some major tweaks. Rather than being locked into a specific party layout after entering a dungeon, you can now change your character positioning on the fly. If your front defender gets killed, switch him out for someone fresh, or change your main character entirely. We’ve added a lot more flexibility to allow players to dive even deeper into the dungeon-filled world.

T-G: Bean sprouts play a key role in the game, can you tell me about the functions of these food-things?

Phoenix: The bean sprouts that you will find in the dungeons have recovery or detoxifying effects. In addition, bean sprouts are the mascot characters for this game. In the beginning, a female Sprout, Sprouty, will assist you through tutorials for the dungeons. Also, for extra entertainment, you can send Sprouts out and let them have adventures of their own. If you’re lucky, they might discover something new, like dungeons or music!

T-G: One of the most immersive elements of ClaDun was the Magic Circle. Does Legasista have any comparable components?

Phoenix: In Legasista, you can take on a dungeon with a maximum of three members on your team. The one that’s Active will explore the dungeon, and the others will stay in Support and be on standby. What’s different from ClaDun is that Active and Support characters can be quickly switched while you’re in the dungeons. The Active member is in the line of fire, but elemental damage from traps or enemies will affect the Support members as well. Not only can Support members switch places, but they can support the Active member with their abilities or magic. For example, Support members with magic can cast it to increase your ATK.  As situations in dungeons continuously change before your eyes, the actions you take are all up to you. Going with a team will cover your weaknesses and enhance your ability to deal with complex situations. 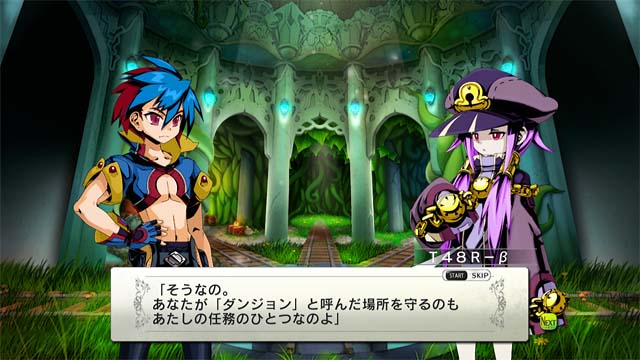 T-G: Mugen Souls certainly caught my eye, with combos which take off billions of points, and more than a pass resemblance to the Disgaea franchise. Can you tell us more about the title?

Phoenix: Mugen Souls is an over-the-top galactic adventure in which you follow the journey of Chou-Chou, the self-proclaimed god of everything. She travels from planet to planet, bringing them under her rule and collecting servants to help her along her way. She also happens to have a variety of personalities living in her, which she uses to influence and control (and annoy) those around her. The resemblance to Disgaea comes from the fact that it features the art of Takehito Harada, longstanding artist for the Disgaea series. Mugen Souls will feature a similar tongue-in-cheek storyline and a battle system featuring ridiculous moves and ridiculous damage.

T-G: A disproportionate amount of attention has been devoted to the removal of the title’s content. Why did NISA feel the need to excise these scenes? How vital are these scenes to the game’s overall feel?

Ryan:  We opted to edit a few parts of the game to better appeal to a Western audience.  The story, characters, and gameplay have been completely untouched. There were a few minute areas that we did have to slightly edit, but again, nothing major has been changed.  We are definitely confident fans will be able to enjoy the game! 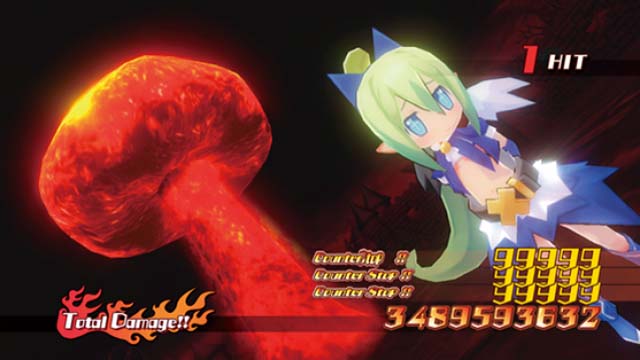 T-G: Lastly, let’s talk about The Witch and the Hundred Knights, which except for Prinny: Can I Really be the Hero and its sequel, is Nippon Ichi’s first foray into action. What can gamers expect from The Witch?

Ryan:  We are really excited for The Witch and the Hundred Knights! It is a completely new direction for Nippon Ichi Software, Inc./NISA as it is our first true Action-RPG  on the PS3.  Fans will definitely appreciate the art, as illustrations are done by Takehito Harada!

Story wise, you take the role of a knight employed by the questionable Swamp Witch to help her turn the tide in an ongoing war she has been fighting against the Forest Witch. In order to accomplish this goal, you will be able to employ 99 other knights to help defeat the army that awaits.  Your character will have various weapons at your disposal (e.g. scythes, lances, swords). The 99 other knights can take various forms to help you during battle, and we’ll have more info on that coming soon!  Areas will be a bit more wide-open compared to the Disgaea grid-style maps, and you will come across villages where you can loot and plunder, or help NPC’s – so it will have a bit of a good/evil decision aspect.  Perspective-wise, it will have a bird’s-eye view to help you navigate the full 3D environments.

T-G: The screenshots releases so far are decidedly dark and undeniably ominous, which is also a departure for Nippon Ichi. Do these accurately foreshadow the tone of the game?

Ryan:  The game itself is definitely a step in a darker direction.  From the screenshots you’ll notice some blood, and the story too has a darker feel to it.  Again, a totally new direction for us, so we are pretty excited to see the playable version later on in the year. 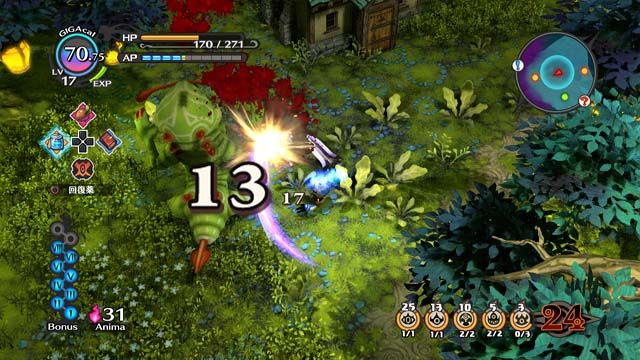 The Witch and the Hundred Knights

T-G: Before we go, let’s throw seriousness aside for a second. Tell me what NIS character most closely mirrors your personality.

Ryan:   Hmm, this is a tough one.  I’d have to say Overlord Zenon; he had me at the “Just like turkeys in the rain!” comment.

Phoenix: I’d have to say Gig from Soul Nomad. I’m not quite as vulgar as him, but I can definitely get behind his desire for world domination and his unnatural love for potato-like tree-grown foodstuffs.

T-G: Thanks so much, doods!