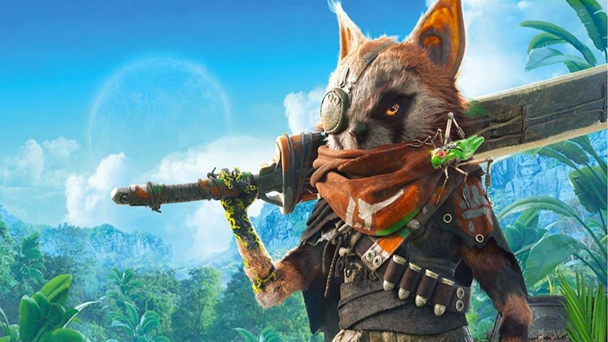 Humankind is presumably extinct, with the fate of the world in the weapon-wielding paws of animals in Biomutant. This description doesn’t begin to touch on the layers of system and cultural references in the game that collectively gives the game a nagging feeling of bloat. 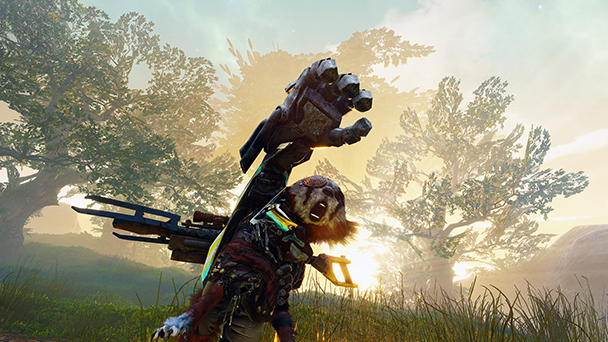 Modern media can be summarized by an elevator pitch, which explains a concept in a way that almost anyone can understand it a very brief period of time. Hitman could be described as “Agent 47 travels across the globe, and using a multitude of disguises, attempt to blend in, all in an effort to kill targets in creative and often darkly comical ways”. But trying to describe Biomutant in a few short sentences is a near impossibility.

Normally, that might signal a video game that brimming with creativity and distinction. But woefully, both plot and play feel like an inventory of references which end up feeling like a bloated jumble. Aptly named developers Experiment 101 adopt a kitchen-sink approach, cramming in an overabundance of ideas. Often, it seems no one wanted to speak up and say, “enough is enough”. 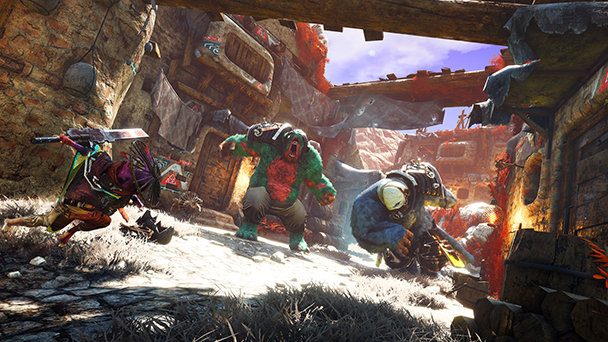 Everything but the Akira Bike Slide

The game’s world, arguably the most interest aspect across the twenty-hour campaign is a post-apocalyptic world where destruction was brought on by ecological mistreatment. Humans are gone, and odd animals have taken over, using jerry-rigged armor and weaponry right out of Mad Max. Nature has manifested giant, lizard-like beasts known as Worldeaters to rid the world of factions of these dueling animals, echoing the plot of 67 years’ worth of Godzilla films. Right in the middle of all this is the Tree of Life (which surprisingly, isn’t called Yggdrasil). But with its massive roots outstretched in the four cardinal directions, it can be difficult to separate the ‘sacred thing you must protect’ from the goalmouth of a dozen other games.

Language in Biomutant sounds like the constructed languages of A Clockwork’s Orange’s Nadsat or Macross: Do You Remember Love?’s Zentradi. It’s undoubtedly a creative idea when using sparingly, but repeatedly parsing through phrases such as, “Finally, Goop is almost done with the googslide” and listening to the game’s manufactured dialects, you’ll wish that the attention to linguistic diversity was channeled into making combat more diversified. Across the campaign, David Shaw Parker provides omnipotent narration. While his delivery is spot-on, there hasn’t been a voice-over more unnecessary since the original theatrical release of Blade Runner. Perhaps Experiment 101 sensed the superfluousness of the game’s commentary, as there’s a menu slider to adjust the amount of voice-over. 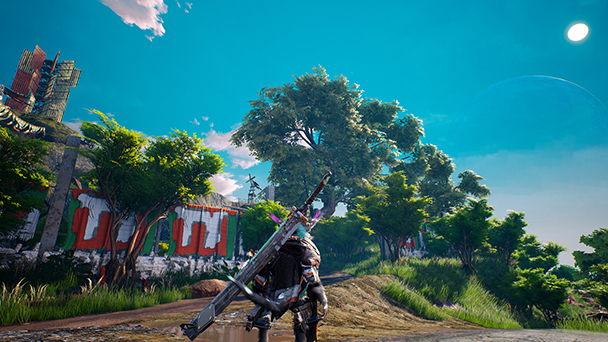 Comic Interludes by Manifestations of Good and Evil

The cornucopia of concepts is especially evident in Biomutant’s early hours. A character creation suite and introductory sequence seems to offer all the selections, sliders, classes, and alignments of a traditional role-playing game. While you’re invited to give distinctiveness to your mutant otter/cat/fox protagonist, in execution, Biomutant feels a lot like Fable. There’s an abundance of depth and potential for these kinds of systems but nurturing your charm stat just to save a few coins with the local merchant rarely justifies your efforts.

Ambitiously, Biomutant layers systems on top of systems, and there’s an elaborate crafting method, which permits players to construct unconventional weapons from recycled parts. While offbeat fusions of wrench handles and ceiling blade fans feel unconventional and swinging a toxic toilet brush has comic possibility, the dividends from min-maxing tools diminish too early. By the campaign’s midpoint, you’ll probably have unlocked a host of psi-powers and skills that lets you effortlessly thrash most opponents. Typically, stat-boosts and equipment augmentation are essential preparations for boss battles. But often, Biomutant’s showdowns are vehicularly-based. They’re gratifying reprieves from the tedium of mixed melee and ranged combat, but they don’t convey the feelings of dedicated mastery and shrewd inventory management often enough. 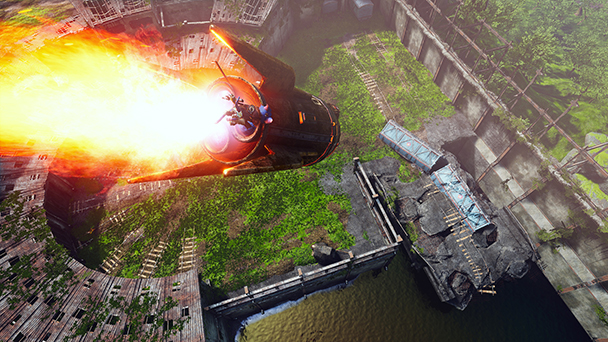 The game’s linear prologue imparts the fundamentals of the game’s multitude of mechanics. There’s a combat system that weaves into abilities into loot shooter grinding, color-coded dial puzzles, character upgrades, resistances, and even weapon-type special abilities. Each almost challenges players to identify the reference, whether its Borderlands’ eccentric inventory of firearms, Mass Effect’s diversionary locks, or protagonist enhancements from almost any open-world action game. These are the systems that have incentivized dozens of games, so each feels familiar. Biomutant’s distinctiveness is rooted in just how many of them are in the game. While they don’t always mesh together in harmonious ways, it’s evident the developers sought a multiplicity of motivations for exploring the flora-filled world.

Ambition is also rooted in the game’s depiction of clashing cultures, who each have their own position of the looming secondary apocalypse. Early on, you’ll face a pivotal junction that forces you to align with a clan that wants to unite the other clans and another who seeks to conquer the remaining factions. Either way, the bulk of Biomutant follows the same route, as you travel to each clan and fight the game’s quartet of Worldeaters. Differences mainly manifest in the type of psi-powers you have access to, but it’s not variation to justify a second play-through. 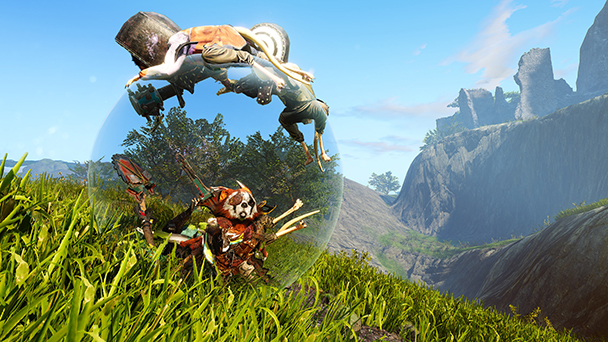 Oddly, it’s often the game’s unsophisticated moments that will resonate. Scurrying across an incongruently lush dystopia, past revitalized meadows doted with vibrant fields of flowers is evocative. Interiors and puzzles revolve around dilapidated structures and cultural artifacts, and it’s stimulating to see everyday objects like washing machines framed at exotic relics by those who inherited the world. Credit should be given to the game’s engine, which renders Biomutant’s realm with far-flung draw distances, allowing the Tree of Life to be used as a visual landmark when navigating without the in-game map.

But exploration is interrupted by combat that feels is less-open world and confined to pre-set spots in the environment. Again, the references are evident. With Batman: Arkham Asylum’s signaled parries, and a Devil May Cry-like fusion of melee and ballistic-based conflict. Oddly, Biomutant’s fisticuffs are punctuated by comic book-style bit of texts confirming hits. But like so many other aspects, it’s an homage that’s used and quickly discarded, providing scant sense of cohesiveness. 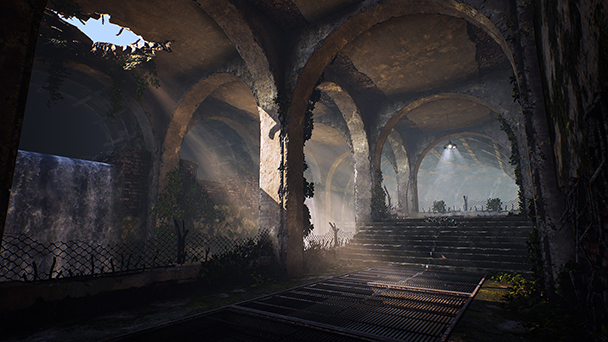 Biomutant was played on PC with review code provided by the publisher.

Biomutant review
Humankind is presumably extinct, with the fate of the world in the weapon-wielding paws of animals in Biomutant. This description doesn&rsquo;t begin to touch on the layers of system and cultural references in the game that collectively gives the game a nagging feeling of bloat. Modern media can be summarized by an elevator pitch, which explains a concept in a way that almost anyone can&hellip;

Summary : Biomutant is an ambitious amalgam of mechanics, pop culture references, and absurdist lore. This abundance of concepts should be invigorating, but all too often, it all feels convoluted and uninspired.