From large developer houses like Pyro Studios (the Commandos series) and Mercury Steam (Castlevania: Lords of Shadow, Raiders of the Broken Planet) to indie devs like Moonlighter creators Digital Sun and Maldita Castilla’s Locomalito, Spain continues to be an influential force in the gaming industry. This time, we take a look at two of España’s latest efforts, a polished action-rpg and an eight-bit homage with controller-clenching difficulty. 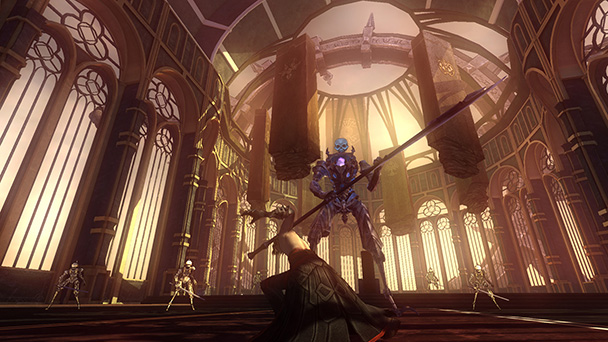 There are several reasons why Anima: Gate of Memories probably isn’t receiving a mountain of media coverage. Based in a universe established on a Spanish table-top book franchise, the property’s context of Gaïa is exceedingly complicated, presenting a multitude of entangled factions as well as individuals without allegiance. The game’s crowdfunding efforts, while successful, were hardly monumental- with a funding roughly a one-fortieth the size of Torment: Tides of Numenera’s support.

But despite these impediments, developer Anima Project was able to craft an action-role playing game that often contradicts its indie pedigree. Players who appreciate the combination of combat, exploration, and puzzle solving entwined by games like the Devil May Cry series might be interested in the affordably priced effort. 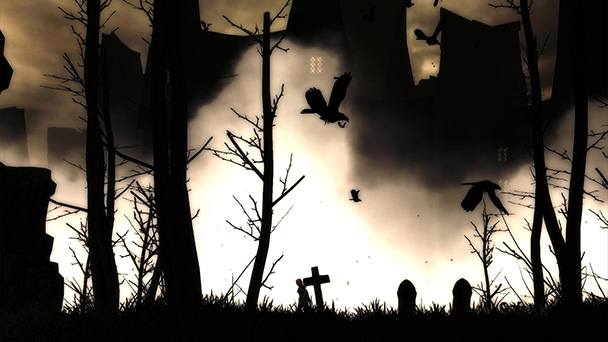 For the Switch iteration of Gate of Memories, the developers bundled both the original game along with The Nameless Chronicles expansion. Sure, there’s redundancy, with the bulk of movesets shared by characters across the two arcs. But for those willing to immersive themselves in Anima lore or gamers who just appreciate an abundance of content for their hard-earning dollar, Gate of Memories largely delivers.

The first game tasks players with taking control of The Bearer of Calamities, as well as Ergo, a merciless demon housed in a grimoire, but able to take physical form. The relationship between these two characters provides Gate of Memories with its hook, with players able to freely cycle between the two combatants. It’s also drives the game’s narrative, with banter between the two protagonists driving the plot along. But that’s not the only expositional perk. Each of the game’s five Messengers (bosses) having a detailed backstory. For the expansion, players take control of Gate of Memories’ antagonist, an immortal who journeys through his past lives to reveal, well, even more folklore. 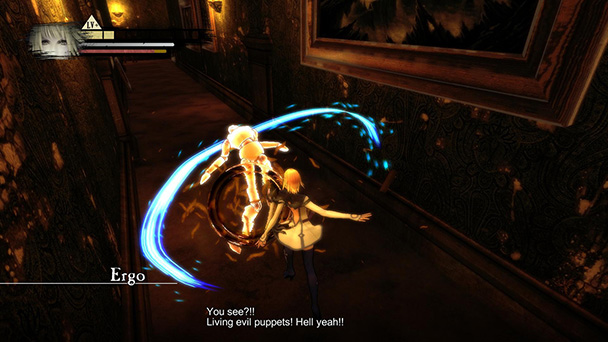 Enjoyment stems from Gate of Memories’ proficient combat system, which with skill trees and found equipment, gives players a gratifying amount of flexibility. During the first few hours, you’ll be mastering dodging as well as summoning a steady stream of projectiles. Additionally, melee-based confrontations feel satisfying, with characters able to zoom right up to enemies, before issuing out punishing combos. If you need a point of reference, think of the Naruto Shippuden: Ultimate Ninja Storm titles, only with slightly less jutsu.

But Gate of Memories does have some elements that might confound players. The game’s conundrums transcend the usual switch puzzles of most action-rpgs, sporadically requiring a level of scrutiny that’s uncommon for the genre. While players might adapt to that, they’ll probably won’t acclimate to the game’s platforming sections, which tend to produce frustration, especially went enemy projectile push you over edges. And then, there’s the occasional instance where the camera pulls puck so far, that the Bearer/Ergo is about as big as a baby flea. 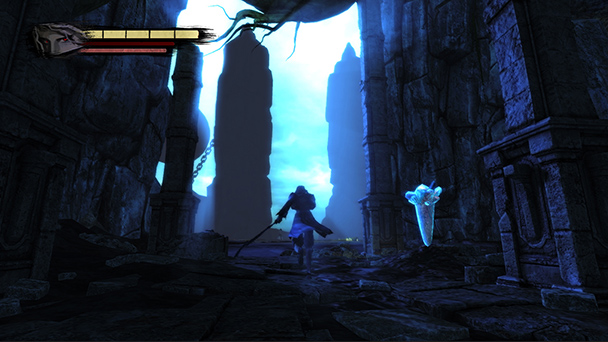 Despite this issue, the Anima games looks great on the Switch. Like Devil May Cry, the environments might feel a bit empty, but the jutting mountains, snowy plains, and medieval villages are rendered in a luxurious fidelity, and at a fluid sixty frames-per-second. Just as skillful are the game’s soundtracks, which channel the operatic beauty of Nier as well as offer some plaintive piano-driven melodies that are undoubtedly one of the highlights.

Recommended for: Devil May Cry fans who appreciate a lot of bang for their buck. 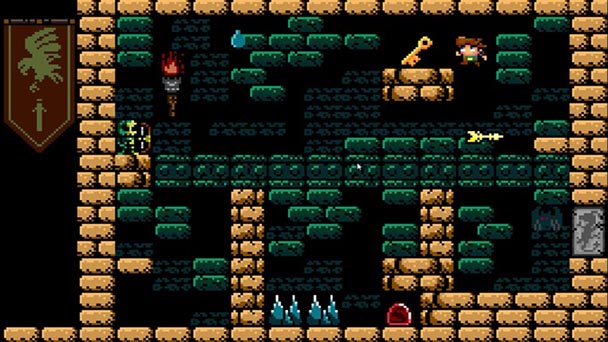 A Journey with Nogalious, the first chapter of an envisioned trilogy, is an experience that appears rooted in nostalgia. The game’s opening text crawl, where a pixelated font details the eponymous character’s daughter kidnapped by the malevolent Darama, captures the brevity and simplicity of eight-bit era narrative. Head into the game’s tutorial and you’ll observe the type of spritework that dominated late-eighties gaming. The game’s protagonist is stout, with personality provided by a pompadour that’s nearly half of his sixteen sixteen-pixel height. Backdrops offer reminiscent backdrops where the same bitmapped bricks serve as dungeon walls and city streets. If you ever played a NES, Commodore 64, ZX Spectrum, or MSX, the game’s visuals are poised to produce wistfulness.

Similarly, the game’s soundtrack is rooted in the melodies of yesteryear. Gryzor87’s (Maldita Castilla, Super Hydorah) chiptunes emulate the percussive basslines and melodic wails of a FM synthesis chip. But not everything about Nogalious is an authentic homage to the idyllic past. 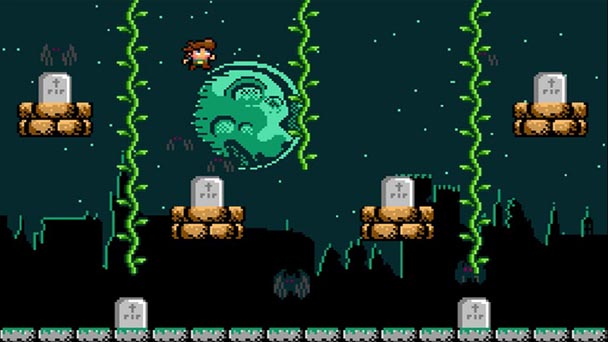 The game’s five stages typically revolve around single or multi-screen pursuits of a key, which when collected, open the path to the next sub-section. Separating Nogalious from his short-term goal are a multitude of hazards, each designed to exterminate the heroic character. While antagonist is ubiquitous across eight-bit games, here the prevalence is amplified. Just a few screens in, birds will descend upon the unarmed protagonist. Take refuge in the climbable vines and they’ll slash at the scaffolding. If you’re unfortunate enough to be on one when the foes attack, you’ll plunge to your death.

Elsewhere, seemingly innocuously bushes can kill the protagonist. Even a drop of water means a quick demise. Progress isn’t dependent to reflexes or mastery of the character’s abilities. Instead, advancement in Nogalious is driven by trial and error, with each environmental obstacle and enemy requiring scrutiny to circumvent or eradicate. 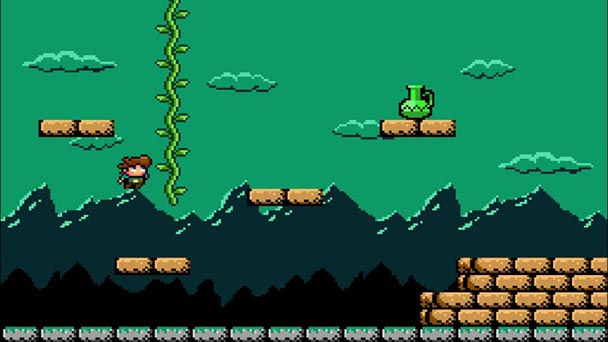 Luckily, the game does provide a number of weapons to use on your trek, with offensive tools like a sword, boomerang, and timed explosives. Sporadically, the devices won’t always work as expected, with the trajectory and hit detection of the boomerang leading to irritation. But mostly, frustration stems from the loss of any tools when you are killed, which necessitates a bit of backtracking.

Tiles like Ninja Gaiden, Battletoads, Ghosts N’ Goblins are why the eight-bit era is associated with unforgiving levels of difficulty. Nogalious ratchets the level of challenge even higher, with a test of patience recommended only to extremely patient players. I found it more frustrating that fun, but I know that gaming masochists might appreciate the challenge that Raúl Nogales and the rest of LuegoLu3go team presents.

Recommended for: Retro enthusiasts looks for a lofty level of challenge.