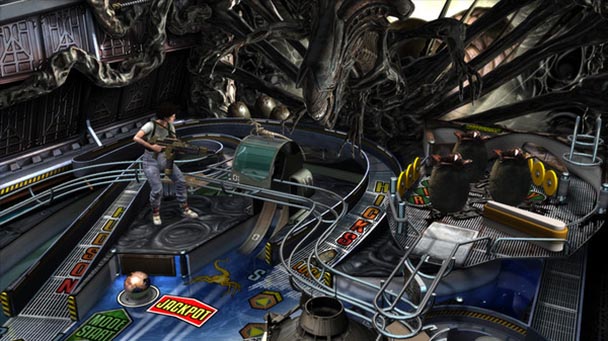 Few cinematic monsters are as fearsome as H. R. Giger’s Alien. Originally conceived for Ridley Scott’s eponymous film, the creature was a nightmarish amalgam of snake and skeleton, outfitted with lethal claws and a dagger-like tail. In the 37 years since the original films’ release, the Xenomorph has emerged from the shadows of the Nostromo to star in a number of interactive experiences, even making unexpected showings in games like Minecraft, Counter-Strike, and Mortal Kombat X. And while titles like Alien Crush for the TurboGrafx-16 have flirted with the idea of having players confront the fiend with a steel orb, until now 20th Century Fox hasn’t officially sanctioned the infestation of virtual pinball.

But with the release of Aliens vs. Pinball, the bipedal baddie is getting its own trio of tables. Expectedly, the package arrives with Zen Studio’s customary level of polish, delivering sixty frame-per-second goodness across a set of shrewdly designed machines. As with most of the developer’s Zen Pinball 2 supplements, you don’t even have to be a fan of the source material to appreciate the beloved battle against gravity. 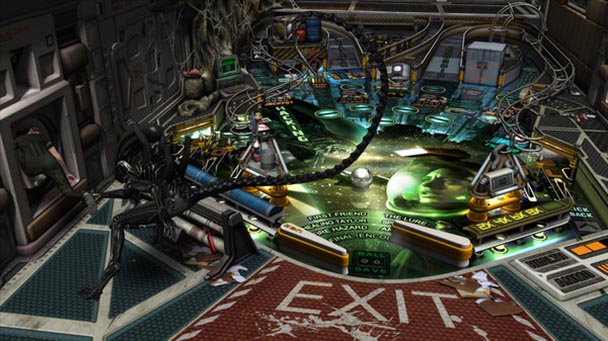 Undoubtedly, the Aliens table is the compilation’s standout success, highlighted by a labyrinthine playfield that’s filled with skill shot opportunities. It’s a machine that feels crammed with classic pin features, with rail ways resembling the interior of the USS Sulaco. Each is dedicated to a crew member of the James Cameron-directed sequel, while inline rollovers spell out Newt’s name. Hitting the Ellen Ripley target in the top left of the machine triggers events, with players able to select their own order or have the machine can follow the chronology of the film. Looming over the entire playfield in the Alien Queen, rendered in glistening onyx tone, dripping goo over the top rails. While the table is unquestionably brilliant, it’s the inclusion of actual voice work that really makes Aliens stand out. Previously, Zen had hired voice talent that often struggled to recreate the verbal qualities of the original actors.

Unfortunately, the sound clips which accompany play in Aliens vs. Predator aren’t as adept, offering awkward phrases that try to correspond with on-table actions, but often feel forced. But largely, that’s the only gripe with the simulated machine which depicts the hunting expedition of the Yautja. Like Aliens, the table is crammed with targets and modes that are triggered by thumping a small alien on the table. Exhibiting conflict from the Predator’s perspective, Wrist Blade Frenzy simulates thermal version, identifying drop shots with bright orange colors, while Vertigo inverts your orientation to simulate an alien attack from the ceiling. In the table’s backdrop is a pyramid which houses a mini-game which tasks players with replication four glyphs. If you able to duplicate them in time, and lock three balls in the pyramid’s mid-table access door, you’ll be able to enjoy multi-ball mode. 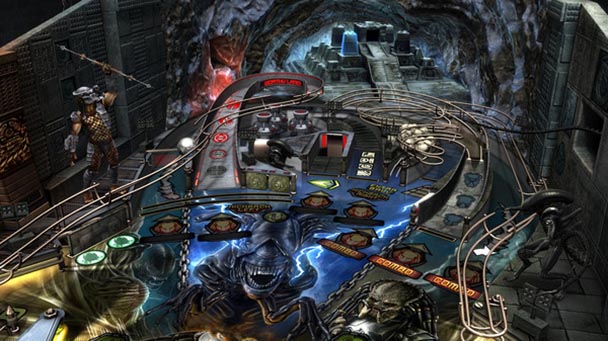 Rounding out the package is Alien Isolation, based on Creative Assembly’s 2014 survival horror title. With an open mid-machine playfield, the table feels like a vintage pinball game, with the ball longing to leave via the drain hole. Success on this machine means maintaining health and weaponry- two variable which factor into score calculation. The table’s signature element is an Alien model that demonstrates four distinct behaviors, from nonchalantly wandering around the perimeter to actively attacking Amanda Ripley. While keeping the orb in play is harder on this table, Zen makes a number of concessions, such as offering five different ways to earn an extra ball and easier kickback activation.

Maintaining their consistent level of quality, Zen Studio’s Aliens vs. Pinball package is another winner. If you’re a pin-head, there’s more than enough shrewd table design to warrant a purchase, while fans of the Xenomorph will be delighted to see the deadly creature immortalized in pinball form. They’ll also be delighted that Aliens vs. Pinball draws from some of the better source material with none of the penal colony digressions or Ripley Clones that effectively massacred the main film franchise. That said, not including a table based on the original film must have been a Weyland-Yutani imperative, and is the sole disappointment. 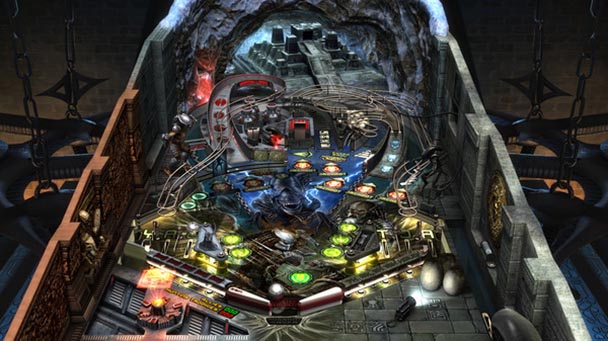 Aliens vs. Pinball  was played on the PS4 with review code provided by the publisher.

Aliens vs. Pinball
Platform: PS3, PS4, Xbox 360, Xbox One, mobile, and PC
Developer: Zen Studios
Publisher: Zen Studios
Release Date: April 26th, 2016
Price: $9.99 via PlayStation Network, XGS, Steam, Google Play, and the App Store
Aliens vs. Pinball review
Few cinematic monsters are as fearsome as H. R. Giger&rsquo;s Alien. Originally conceived for Ridley Scott&rsquo;s eponymous film, the creature was a nightmarish amalgam of snake and skeleton, outfitted with lethal claws and a dagger-like tail. In the 37 years since the original films&rsquo; release, the Xenomorph has emerged from the shadows of the Nostromo to star in a number of interactive experiences, even making unexpected showings in games like Minecraft, Counter-Strike, and Mortal Kombat X. And while titles like Alien Crush for the TurboGrafx-16 have flirted with the idea of having players confront the fiend with a steel orb,&hellip;

Summary : Giger’s Alien gets its own trio of tables, and each is mechanically splendid, drawing from the Alien franchise’s better moments.