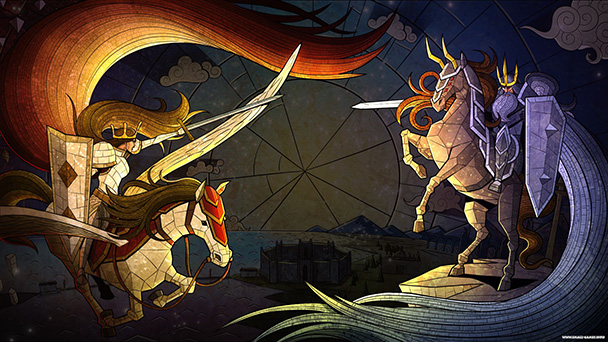 Looking for an adventure with arduous platforming and challenging combat? Aeterna Noctis offers more challenge than most of its explorational-driven peers. 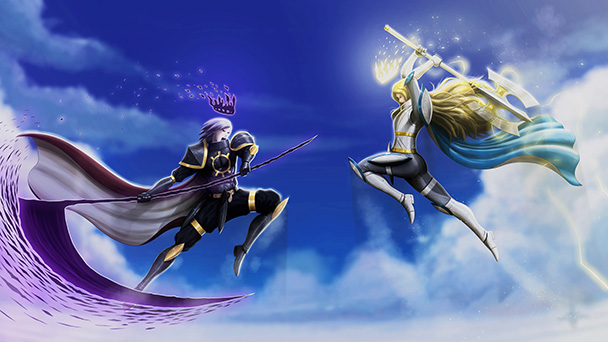 At first glance, Aeterna Noctis seems like another indistinctive Metroidvania.  You play as the King of Darkness, condemned to complete for control of the world against the Queen of Light. The rivalry has been continuing for eons, creating a semblance of balance. But the game’s anime-style opening cinematic depicts the Queen triumphant in battle, with the victory sending the King plunging like a meteorite toward the world below, stripped of almost all of his potent abilities.

Like many entries in the genre, Aeterna Noctis’ journey revolves around a gradual re-possession of your powers. You’ll start meagerly, with a modest leap and a feeble melee attack. Both are essential since your journey through Aeterna is filled with roving creatures like slimes and blade-carrying specters who will pursue you mercilessly. The typical tools of the trade, such as additional weapons as well as a sprawling tech-grid filled with navigational and offensive capabilities are all predictably present. 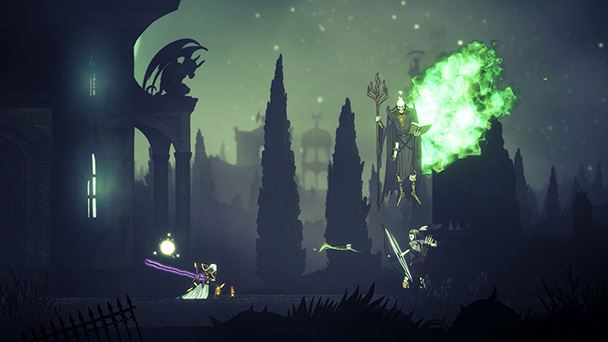 But soon you’ll discover Aeterna’s distinctive trait: exploration reveals a wealth of precarious platforming. One of the first aptitudes you’ll have to master is a secondary, smaller leap by bouncing off a floating object.  This is triggered by a precisely timed downward weapon thrust, catapulting you back upward. But the maneuver never feels as refined as it should be. After several falls, the King will respawn at one of the game’s numerous checkpoints. But these feel like concessions for sporadic lapses of precision.

But it’s not just the occasional clumsiness of the game’s controls that will wear your down. Unlike most Metroidvanias that provide infrequent tests of platforming prowess, Aeterna Noctis will challenge you persistently. Often positioning stretches of small platforms above spikes and other hazards, just navigating through the game’s sixteen biomes can feel laborious. Typically, the genre doesn’t require players to master techniques like air cancels or scampering across extended walkways that phase in and out. But here, you’ll encounter the type of elevated navigational challenges found in titles like Super Meat Boy or Celeste. While you’ll earn upgrades like a teleportation arrow, new forms of adversity accompany each new ability. It’s relentless, and that’s the point. 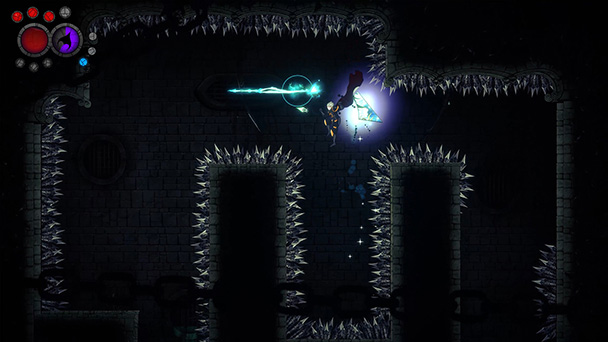 For masochists, the developers dangle dividends, like heart pieces that can extend your life gauge. But you’ll have to toil for every single bonus. While that’s customary for the genre, getting to those bonuses in Aeterna can easily triple the game’s twenty-hour playtime.

Similarly, enemy encounters are no pushovers. Sure, you’ll find the usual pacifistic foes at first. But soon, the game’s adversaries pursue you doggedly as soon as they spot you. Confronting them like some kind of Castlevania fodder would be foolish, given their speed and navigational methods. Instead, you’ll want to read their patterns, intrepidly striking at the intermittent opportunities between their attacks. Occasionally, Aeterna Noctis punishes with one-hit kills, so you’ll want to advance cautiously until you’ll gleaned enemy weaknesses. 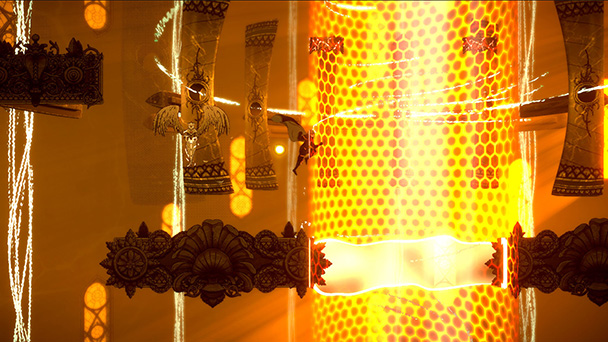 When the environment and enemies inevitably deplete your health, you’ll forfeit all of your collected money, experience, and potions. Your place of death is marked with a symbol, and if you’re able to venture back to the location without dying a second time, you’ll regain lost belongings. That’s not the only Souls-like quality to be found. Thrones function like bonfires, offering a place to upgrade your abilities or fast travel throughout the world.

While protagonist builds aren’t completely idiosyncratic, Aeterna does provide you with options. Enemy drops tend to bounce and fall to the floors below, so a bit of magnetism can eliminate the waste. Other options include the customary intensification of attack power or a better chance of landing a critical strike. You’ll probably wish the game’s tech grid wasn’t so generic, though. Often, your capacities feel culled from an early millennium MMO. 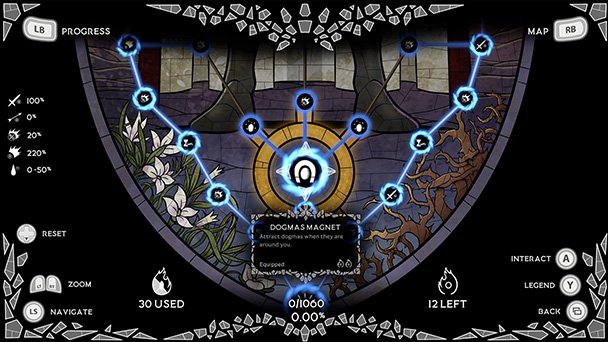 Likewise, the game’s aesthetics are competent, but not exactly innovative. The game’s zones have distinct looks and while enemy types are recycled, there’s some visual variance in play. But the game’s texturing can be a bit bland, with stages and opponents rendered with broad brushes. Aeterna does try to hide its graphical economy with lot of parallax scrolling and visual effects, but occasionally the screen can get a bit too busy. Although the game’s soundtrack occasionally veers into unexpected territories, individual tracks are rather short, resulting in repetition.

Although novices will feel overwhelmed by Aeterna Noctis’ chastising challenge level, those who find Metrovanias too easy might enjoying the demanding exploration. Like many grueling games, there’s a satisfying sense of accomplishment felt when overcoming adversity. If you’re seeking punishing platforming or boss battles that you’ll have to repeat multiple times, Aeterna Noctis might lack polish but provides plenty of opposition.

Aeterna Noctis was reviewed with playtest code provided
by the publisher. This code may differ from the retail build.

Aeterna Noctis review
Looking for an adventure with arduous platforming and challenging combat? Aeterna Noctis offers more challenge than most of its explorational-driven peers. At first glance, Aeterna Noctis seems like another indistinctive Metroidvania.&nbsp; You play as the King of Darkness, condemned to complete for control of the world against the Queen of Light. The rivalry has been continuing for eons, creating a semblance of balance. But the game&rsquo;s anime-style&hellip;

Summary : If you are yearning for controller-tossing difficulty and can tolerate a bit of imprecision, Aeterna Noctis' offers an expedition that will test your reflexes and potentially, your patience.