PSA: When Buying New Helps the Publisher, Hurts the Consumer 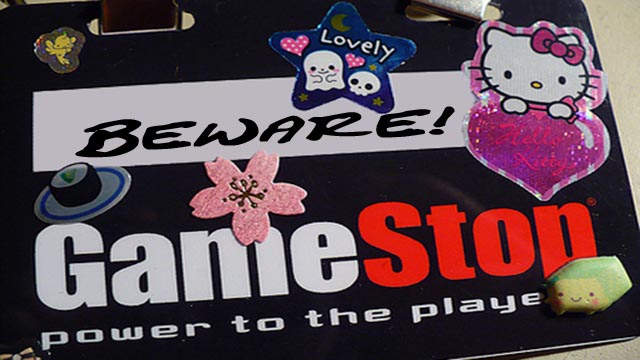 For years, I have avoided the ‘gut’. Alternatively known as a shelf or display copy, it is a term within the GameStop vernacular which refers to a store’s last display box, remaining after all the sealed copies have been sold. With the case displayed for potential purchasers on the wall racks, the game’s media rests securely behind the counter, prohibiting the possibility of theft. Typically, the gut isn’t in the same pristine condition as a factory-sealed game, having been subjected to the attachment of adhesive-laden price stickers and brutish perusals of the instruction manual.

My resolve to purchase games that were unsullied by human hands finally began to weaver as my interest in niche titles grew. Often a local GameStop would only receive a single copy of an obscure JRPG. As such, I was forced to embrace the ‘gut’, a premise often softened by the sympathetic clerk who would offer a new case for the purchase. A few weeks ago, I ventured into my local store with the hopes of purchasing the recently discounted Alice: Madness Returns. A significant portion of the motivation was prompted by the title’s inclusion of the original American McGee’s Alice. The classic game was offered via a download code, which was part of Electronic Art’s growing incentive to encourage players to purchase new, rather than used disks. Naively, I purchased the last remaining copy of Alice.

After playing a half hour of Madness Returns, the desire to experience the original title emerged. Opening the box and rifling though the warranty insert (the game’s instruction manual is on the disk), I searched  for the online pass code in vain. A call to the store provided no immediate resolution,  but the clerk was kind enough to check another nearby location for the voucher. Ultimately, three adjacent stores each had gut copies, but none could locate a single download voucher. With a growing dependence on online passes from publishers such as THQ, EA, Ubisoft, Codemasters, Warner Bros. and Sony, a worrisome development seemed to be looming. According to at least two Southern California GameStop managers, it appeared customers were stealing the online passes right out of the display cases. 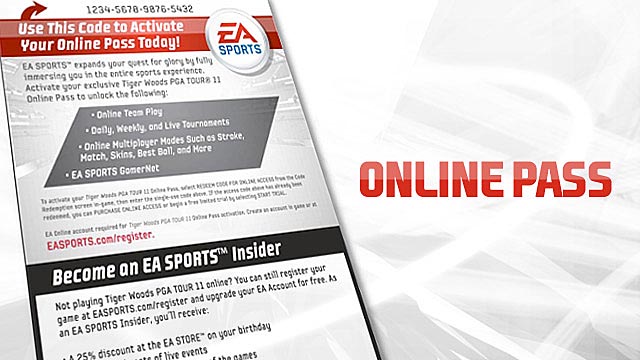 A solution seemed painfully simple: simply store any downloadable codes alongside the game disks behind the counter. According to one store director that method wasn’t so simple, “right now, there’s no way of us knowing which games ship with any kind of [downloadable] codes. Until they [GameStop] send some kind of memo, we just put the disks in the protective sleeves, there’s no room for booklets and sheets.”

With that troubling response, I decided it was time to determine the scale of this concern. Living in Los Angeles, I had the benefit of having fifteen GameStops within a 15 mile radius (in Northridge, two stores are within two blocks of each other!). Using a list of over two dozen games (Battlefield: Bad Company 2, Bulletstorm, Dirt 3, Dragon Age II, Dragon Age Origins, EA Sports MMA, Fear 3, FIFA 11, Fight Night Champion, Homefront, Madden NFL 11, Mass Effect 2, Medal of Honor, Mortal Kombat, NCAA Football 11/12, Need for Speed: Hot Pursuit, Need for Speed Shift 2, NHL 11, Red Faction: Armageddon, The Saboteur, Skate 3, The Sims 3, Tiger Woods 11/12: The Masters, UFC Undisputed 2010, and WWE Smackdown vs. Raw 2011) released  across both the Xbox 360 and PlayStation 3 platforms during the last 21 months, I began the analysis. After visiting each location multiple times (as to not raise suspicion) and pouring over the collected data, the study showed a consistent correlation between the recency  of a game and the likelihood of an online pass still being in the game case. As the chart illustrates, buying a ‘gut’ copy of a game released more than four months ago drastically reduced the probability of finding an online voucher inside. 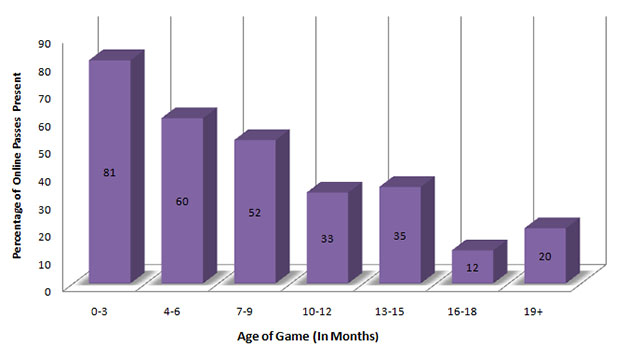 While every attempt was made to preserve the integrity of the study, a few snags could have clouded the findings. GameStop stores periodically receive ‘replenishments’ of  older titles, potentially obscuring the data. Despite the claim that there was “no room for booklets and [code] sheets”, that’s exactly what one store Los Angeles store was doing. Yet even when these variables, the chance of finding an online pass for an older game proved distressing- especially when gamers are paying full price for the pass code.

It should be noted that when GameStop stores were alerted to the absence of an download code, most of them handled the situation compassionately, offered a full refund for the game. However, one  caveat remains: returned ‘guts’ are identified as defective, costing the corporation money. Hopefully, these losses aren’t passed on to the consumer. With a few logistical changes at the store level, GameStop has the potential to adapt to the proliferation of the online pass; let’s hope they make an adjustment that would benefit consumers and the bottom line alike.