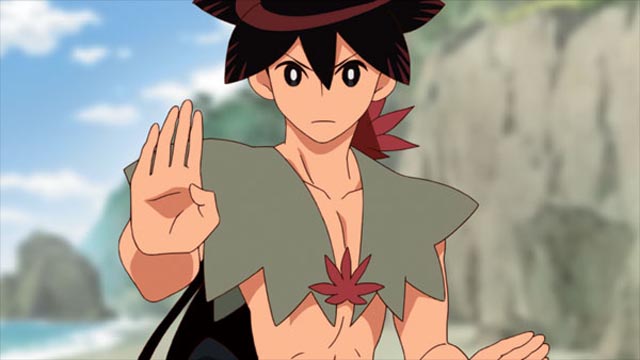 Unexpected quality can ruin a perfectly good plan. Case in point: upon receiving the second volume of Katanagatari from NIS America and having missed the storyline from the first boxed set, I intended to skim through the unseen episodes. Yet, during the first thirty minutes of the anime’s opening installment, I had grown hopelessly hooked. Despite a hectic schedule, I felt compelled to savor every moment from the first volume’s collection of six fifty-one minute episodes, sporadically rewinding scenes to admire the nuance of the series’ dialog.

Adapted from Nisio Isin’s (Death Note Another Note: The Los Angeles BB Murder Cases, xxxHolic: Another Holic Landolt-Ring Aerosol) collection of light novels, Katanagatari’s first volume centers around Shichika, a prodigious disciple of the Kyotōryū school, where swordsmen fight without actual swords, using appendages to strike opponents with blade-like precision and power. Recruited by the self-proclaimed ‘strategist’ Togame to find the twelve Deviant Blade swords, the duo sets out to recapture the influential weapons. While the first six episodes follow a conventional cadence pace, typically leading up to a grand battle for one of the treasured weapons, this uniformity rarely sullies the anime. Instead, Katanagatari skillfully skirts issues of predictability by cleverly toying with relationships, alliances, and motivations. Unlike many similar anime, Katanagatari’s social politics are rarely exaggerated- delivering a convincing amount of tension and habitually steering clear of unexpected shifts of character affiliation. 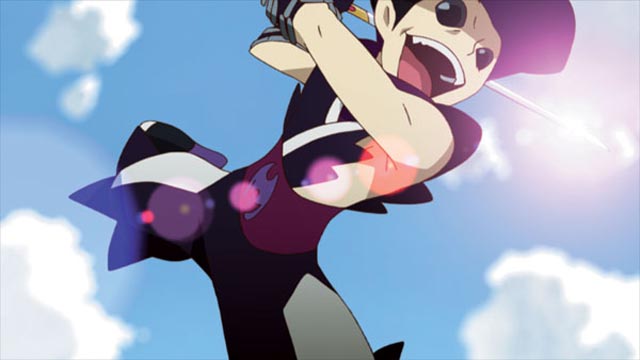 Much of the gratification derived the first volume was articulated through delicate character development. Viewers watch Shichika develop from an indecisive young man, emotionally inhibited by his upbringing on an abandoned island to an actualized, confident hero. Much like Tetsuro Araki’s adaption of Death Note, conversations and visual sequences are teeming with foreshadowing, deftly creating ripples which reverberate across future plotlines. As the second volume commences, the friction between Shichika’s sister, Nanami, and the duo surges. Looking back, evidence of this hostility was evident in the group’s first interactions, expressed almost surreptitiously during the exchange of pleasantries.

In essence, Katanagatari’s second volume plays like an extended love letter to Japanese culture. From obvious (and charming nods) to JRPGs and shmups, an unwavering exhibition of respect and alliance during times of conflict, to an elevation over how something is stated rather that what is said, the series is bound to charm otaku. An appreciation of convention isn’t needed to be stirred by the anime’s emotive instances of sacrifice. Rarely succumbing to simple melodrama, tragedy and anguish are articulated adeptly in the second volume, lending the anime’s conclusion a decidedly Shakespearian timbre. Anyone turned off by the shrillness of anime’s archetypical death soliloquy, will appreciate Keitaro Motonaga’s prudent treatment. 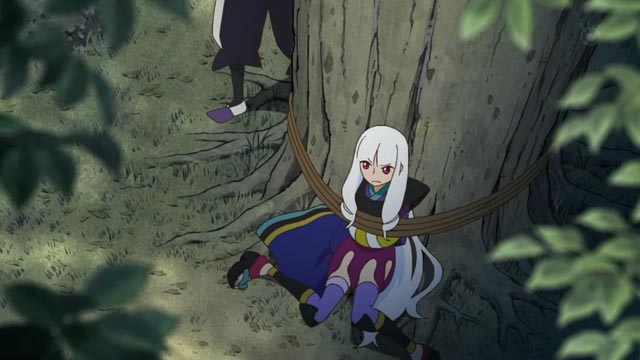 Equally as proficient as the title’s pacing, banter and translation is Katanagatari’s inspired art style. Employing a minimalistic aesthetic, the series boils anime down to its fundamentals, drawing character with bold lines and eschewing minutiae. Conversely, backdrops are typically given more detail- from the rich hues of a castle’s tapestry to the naturalistic splendor of an unscathed forest. Generally, Katanagatari’s ambitions are to emulate the beauty of an illustrated storybook, rather than offer a convincing recreation of real-world inhabitants, which meshes with the storyline’s fable-like quality. Depth-of-field or split-screen effects are utilized as necessary, rather than applied slackly to reduce visual tedium. Sonically, the show’s use of chants and well as more modern styles avoids anachronism and typically subtle enough to not divert attention away from the plotline.

Much like the first set, the second volume of Katanagatari comes on four disks, comprised of two DVDs as well as two BluRays. Image quality across both mediums is immaculate, with the high-definition disk exhibiting an especially beautiful image. Enclosed in a full-color, art-adorned box, the set also includes The Epic of Shichika– a sumptuous hardcover book which contains episode summaries, artwork, lyrics as well as a valuable glossary of terms. It would be hard to imagine a company improving on the opulence of the set. 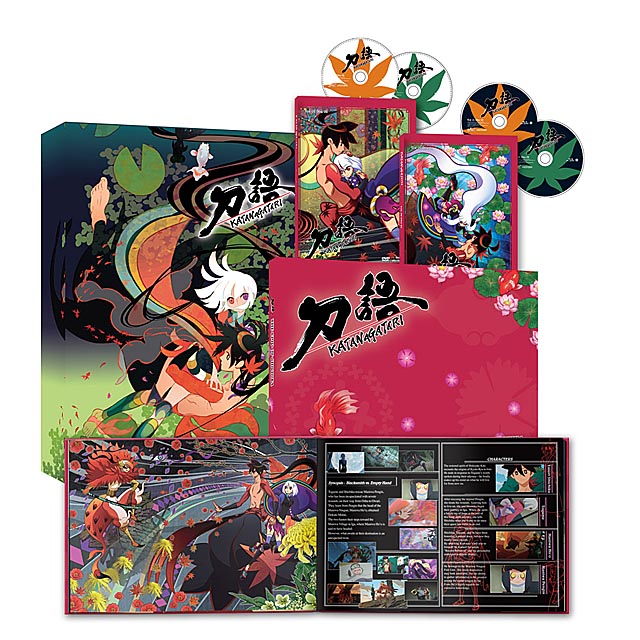 Collector’s sets can be a mixed blessing, occasionally forcing enthusiasts to pay a premium to own second-class anime. Katanagatari is one of the rare anime which unconditionally warrants an elevated price, surrendering one of the most poignant and memorable conclusions in the medium. NIS America is going to have to work tenaciously if they hope to secure a license as beguiling as Shichika’s tale.