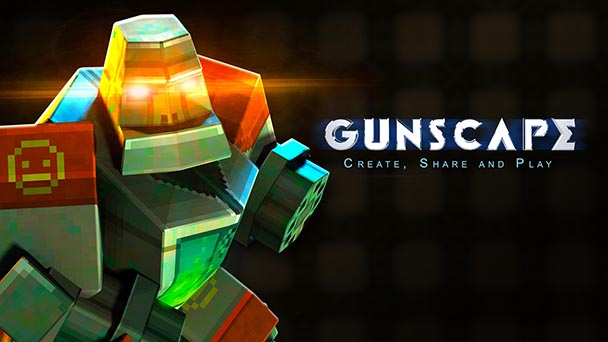 Throughout the years, gaming has witnessed an array of genre-defining titles, from Mario’s jumping, princess-saving exploits to more recently, Minecraft’s block-building and survival endeavors. With any successful entry, clones, competitors and challengers are bound to surface, each with their own twist. Gunscape is one such undertaking, which, as its name suggests, is largely inspired by Minecraft.

Make no mistake though, writing Gunscape as a clone would be a disservice, as the two share very little in gameplay terms. Rather, its influence seems to stem more from the pixelated, voxel-based graphics and first-person perspective than anything else. Yes, both allow you to construct entire worlds if its userbase is dedicated enough, but while Mojang’s breakout title requires players to mine for resources in order to place a single block, Gunscape’s world-detailing tools are a straight editor.

When creating a level, you can fly around an empty void and place as many blocks and tiles as you want, while changing their appearance to suit your needs. I admit to have never having played the PC version, but I will assume it’s mod friendly and would (or at least should) allow savvy players to custom build their own visuals. This Playstation 4 iteration however will only allow you to use whatever pre-fabricated items came with the game. 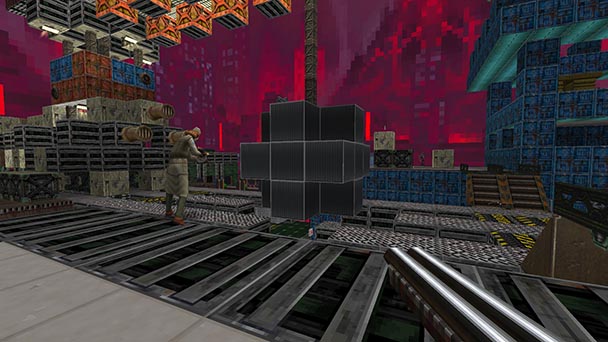 Now granted, for a console-editor, Gunscape is surprisingly versatile in many ways. Anyone with a penchant for Id Software’s Wolfenstein 3D or Doom classics will find a an array of visuals and enemies reminiscent of the old raycasting shooters, including Nazis, demons and items that seem almost lifted and converted to voxels from the source material.

Indeed, many early adopters seem to have noticed this as you can easily find a slew of maps recreating levels from these games. With that said, attempts at recreating Duke Nukem or Quake were far less successful visually, the Hollywood Holocaust stage I ran into felt like it was taking place in Doom’s hellish world simply due to the lack of  city-like blocks.

Levels are also surprisingly large and allow for interactive buttons and levers for anyone interested in having players circumvent locked doors. Alas, no matter how visually interesting a voxel-based Quake looked; all recreations feel too similar despite stemming from different creators. 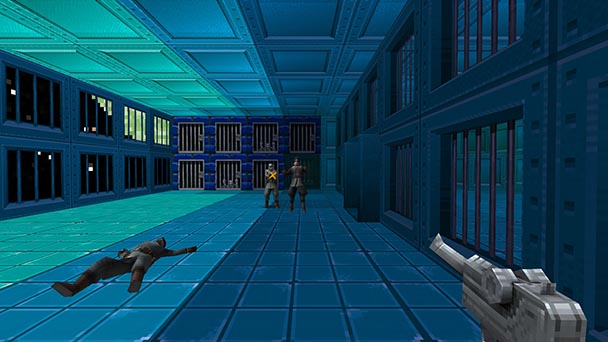 Enemy models feature a decent variety but are often too thematically contrasting to place in the same location, after all, having an alien, a mecha-demon and a demon may sound enticing, but they bring you out of the experience. Yet, if you leave any of these out, then your foes lack balance as they may have lost their heavy hitter, or their nimble melee attacker.

Other limitations include the lack of crouching, swimming or moving blocks, all of which are staples of classic shooters like Quake or Duke Nukem 3D. Perhaps the issue is that I focused too much on playing recreations, but when even the editor picks are filled with such entries, one can’t help but to try out yet another 007 Goldeneye level.

Regardless, one issue is clear; the shooting just isn’t that compelling in single player levels. The weapons are fine, but the bots aren’t the brightest and aiming is slippery. Add the fact that all foes have a tendency to feel somewhat generic or altered copies of more famous enemies and a sense of staleness is established soon enough. 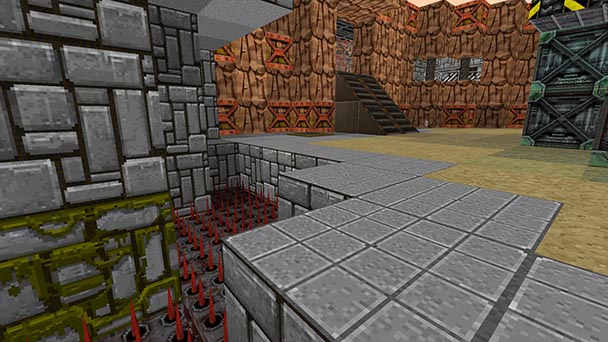 Luckily, competitive multiplayer plays a big part in Gunscape’s allure, featuring the free for all and team gameplay styles we’re all used to, ranging from deathmatch and team deathmatch to capture the flag or infection. In this regard I felt gameplay fared much better as nothing provides the same level of challenge as other players do. In fact, suddenly, revisiting Perfect Dark’s multiplayer stages felt more engaging and thrilling.

Sadly, I noticed the community wasn’t as vibrant as I had hoped. Yes, there are several games running at any hour, but not as many or with as many participants as one would hope. I would wager it’s only a matter of time until this Playstation 4 port follows the same fate as its PC counterpart; abandonment.

This is why I recommend anyone who seeks to enjoy Gunscape to its fullest to jump in now while they can. Currently, the game features an advanced set of world-building tools for consoles and fun online multiplayer. Once the community dwindles however, all that will be left are dozens upon dozens of recreations of more famous shooters, but with their charm and tight gameplay lost in translation. 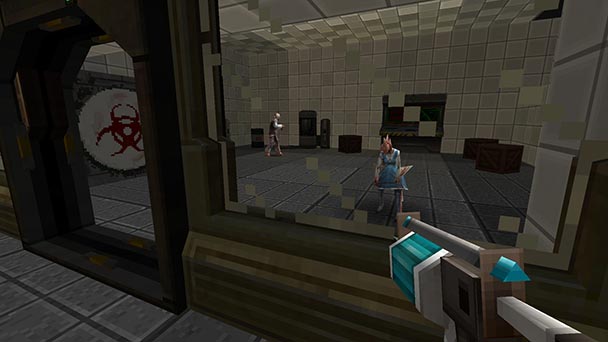 Gunscape was played on the PlayStation 4 with review code provided by the publisher.

Gunscape
Platform: PlayStation 4, also on PC, Xbox One, and coming soon to Wii U
Developer: Blowfish Studios
Publisher: Blowfish Studios
Release date: March 2nd, 2016
Price: $19.99 via PSN
Gunscape review
Throughout the years, gaming has witnessed an array of genre-defining titles, from Mario&rsquo;s jumping, princess-saving exploits to more recently, Minecraft&rsquo;s block-building and survival endeavors. With any successful entry, clones, competitors and challengers are bound to surface, each with their own twist. Gunscape&nbsp;is one such undertaking, which, as its name suggests, is largely inspired by Minecraft. Make no mistake though, writing Gunscape&nbsp;as a clone would be a disservice, as the two share very little in gameplay terms. Rather, its influence seems to stem more from the pixelated, voxel-based graphics and first-person perspective than anything else. Yes, both allow you to construct&hellip; 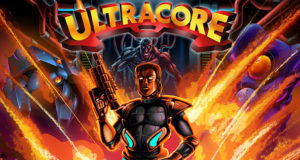