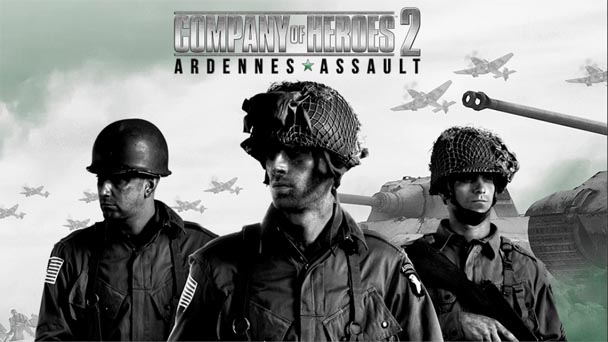 Relic Entertainment spent the better part of two decades building a strong catalog of RTS games, many of which are held in high regard by strategy fans. They would throw new twists to the well-established RTS formula resulting in unique titles like Impossible Creatures or sub-genre creating classics, such as the Homeworld series. Relic’s modern releases, namely the Company of Heroes and Warhammer 40K: Dawn of War games followed in this trend by creation mixing the classic RTS gameplay with “king of the hill” gameplay modes. It’s an odd combination but one that served them well in past and is once again used in Company of Heroes 2: Ardennes Assault.

Players are tasked with controlling the US forces amidst the German Ardennes counter-offensive during World War 2. Being a stand-alone expansion pack, the game assumes players completed the previous campaign, providing only a bare-bones tutorial that is likely to ward off newcomers to the series. Luckily, gamers who have played either the first Company of Heroes or Dawn of War will likely already be familiar with the basics. 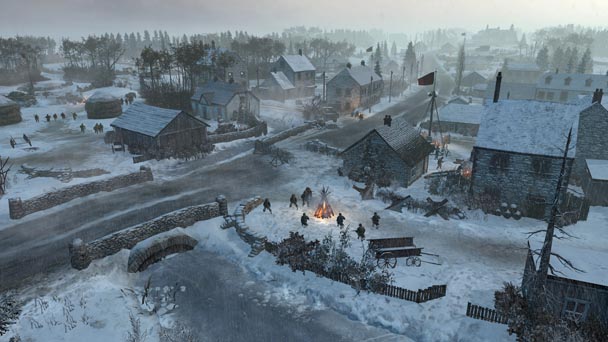 Company of Heroes’ gameplay foregoes most of the genre’s usual resource collecting and base building. Instead each faction must claim several strategic points which grant a continuous flow of resources as long as they are held. These can then be used towards creating new units or upgrading existing ones. This ensures players must constantly balance the risk and reward that comes with constantly stealing or protecting each point, limiting the usefulness of ‘turtle’ tactics.

Combat is highly tactical in nature; squads have inherent strengths and weakness versus certain types of enemies with no one unit being useless. Infantry are vulnerable to tanks but can take cover in buildings, walls or other objects littering the map. Tanks are powerful and expensive, but vulnerable to rocket launchers and have softer armor on the back and sides. Managing these strategic elements requires a great deal of micromanaging and it’s during the game’s most heated moments that the exhilaration of a successful strategy shines the most. 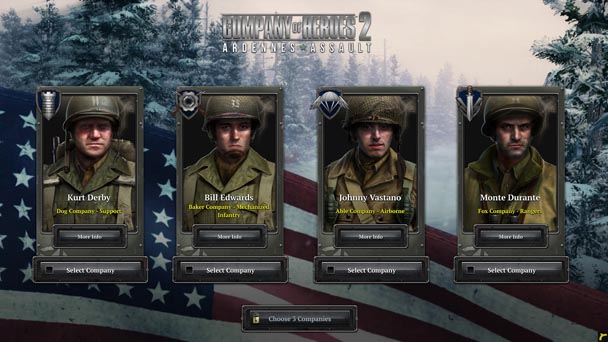 Between combat missions, you move battle companies around the strategic map displaying allied and enemy territory. These are prone to random events which either air or hinder your progress. It’s not the first time Relic Entertainment used a Risk-like map in its games and while it adds a new layer of strategy, it’s also prone to many of the same issues found in previous games. The most notable problem lies with the forced repetition of previously completed missions, objectives or maps.

Players can pick three battle companies, each sporting different play tactics and unlockable abilities, however, only four choices are presented one of which is locked behind a DLC pay wall.  Considering this is one of the first screens we’re presented with before starting the campaign Company of Heroes 2: Ardennes Assault manages to immediately raise a very alarming red flag. My fears soon came to fruition when I realized every mode other than single player campaign was locked. Players who do not own the base entry or the Western Front Armies expansion cannot engage in any multiplayer matches or even offline skirmishes. To make matters worse, some content requires individual DLC on top of the previously mentioned expansion packs, all of which are conveniently displayed through in-game ads during the main menu. 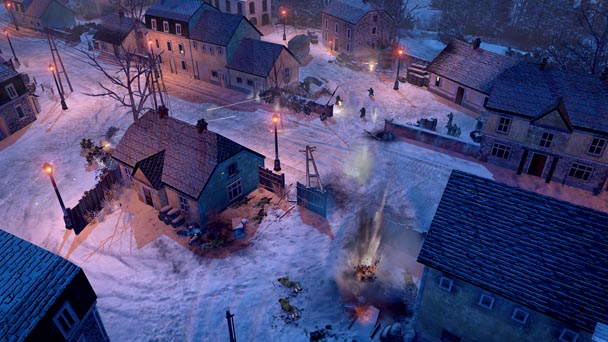 It’s hard to pin down just who Company of Heroes 2: Ardennes Assault is for. Newcomers to the series will likely be turned off by all the content hidden behind a pay wall and the lack of a proper tutorial section. Veterans will have moved on to multiplayer matches which is largely ignored by this expansion and even then some are likely to not appreciate having to purchase individual units as DLC. Even longtime Relic fans such as myself who haven’t played Company of Heroes 2 before are prone to a case of déjà Vu stemming from the Dawn of War games.

This isn’t to say Ardennes Assault holds no merit, at its best the single player missions provide the same tactical expertise I’ve come to know and love from the studio, but it’s hard not to find some disappointment given the quality of Relic Entertainment’s past entries. 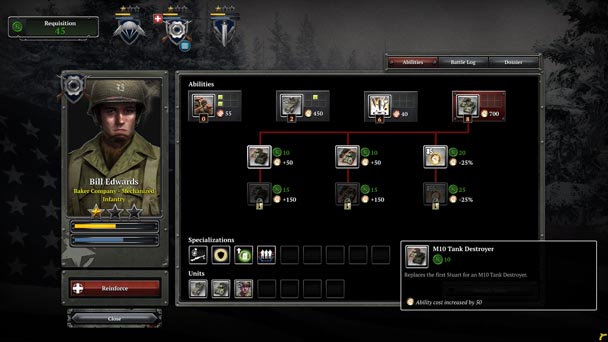 Company of Heroes 2 Ardennes Assault  was played on the PC with review code provided by the publisher.

Company of Heroes 2 Ardennes Assault review
Relic Entertainment spent the better part of two decades building a strong catalog of RTS games, many of which are held in high regard by strategy fans. They would throw new twists to the well-established RTS formula resulting in unique titles like Impossible Creatures or sub-genre creating classics, such as the Homeworld series. Relic&rsquo;s modern releases, namely the Company of Heroes and Warhammer 40K: Dawn of War games followed in this trend by creation mixing the classic RTS gameplay with &ldquo;king of the hill&rdquo; gameplay modes. It&rsquo;s an odd combination but one that served them well in past and is&hellip;

Summary : A stand-alone expansion that offers little to Company of Heroes 2 veterans and is an ill-advised entry point for newcomers. The tactical gameplay remains solid, but does little distinguish itself from past entries.